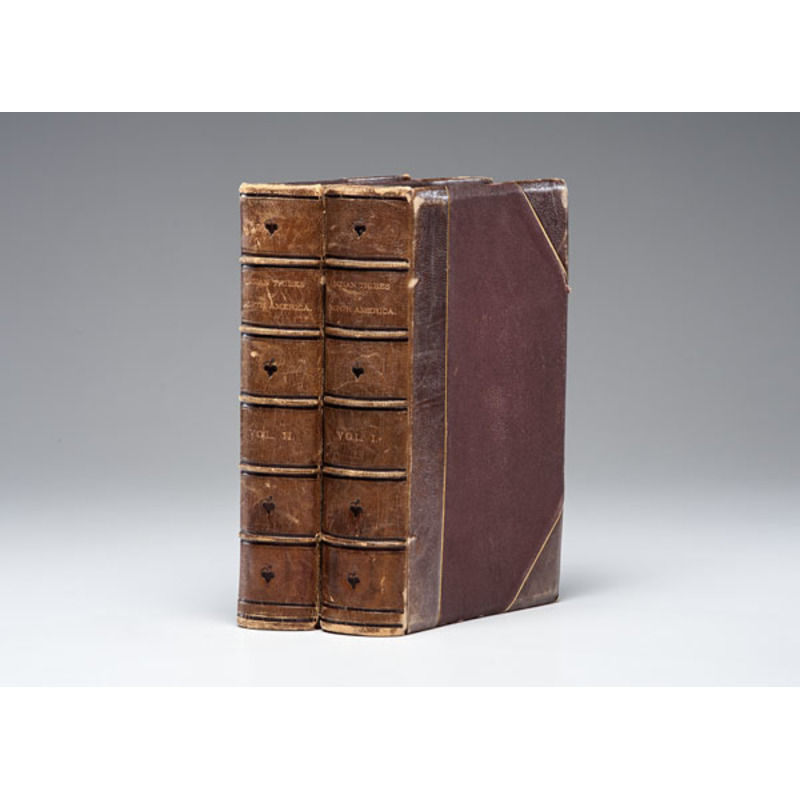 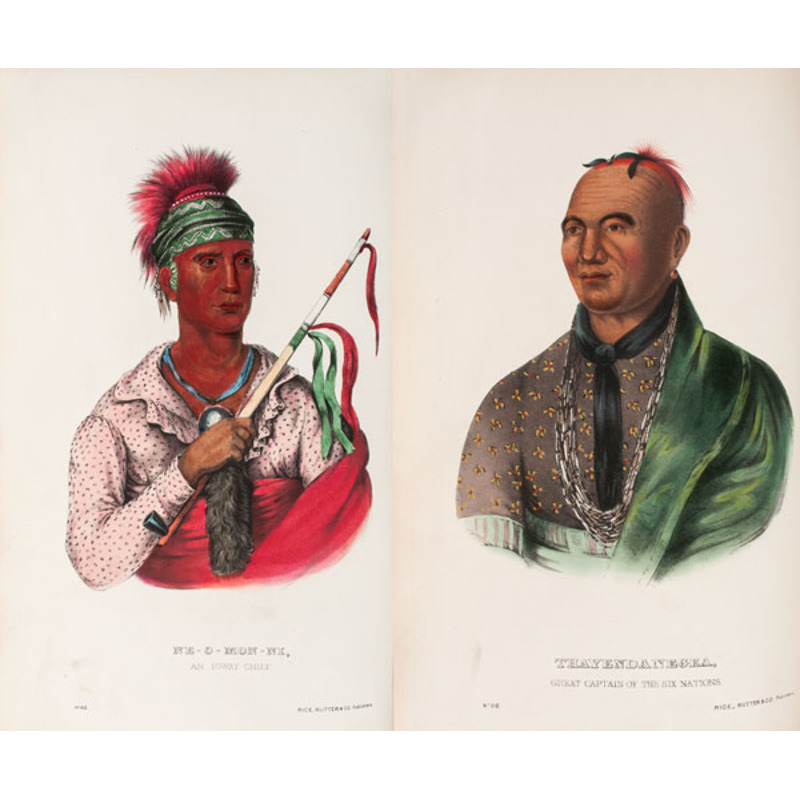 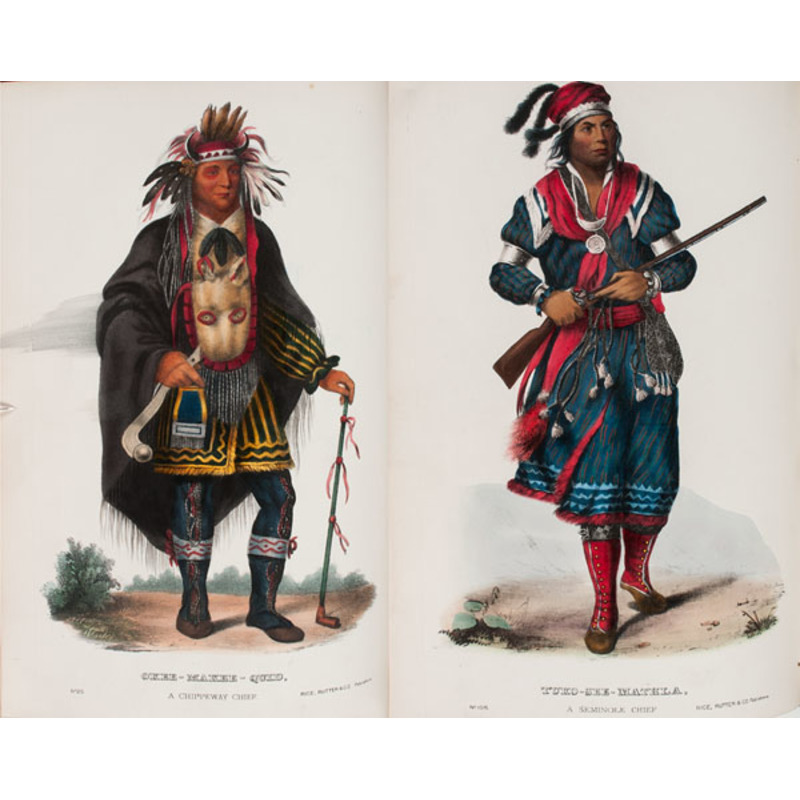 McKenney, Thomas L. History of the Indian Tribes of North America, with Biographical Sketches and Anecdotes of the Principal Chiefs. Embellished with One Hundred Portraits from the Indian Gallery in the War Department at Washington. Philadelphia: D. Rice & Co., 1872, 2 vols. Royal octavo, 3/4 leather over maroon cloth, beveled boards, five spine bands, gilt spine lettering, gilt fillet borders on leather, marbled endpapers, all edges gilt; vol. I, frontis, iv, 450pp, 61 ports. w/tissue guards; vol. 2, frontis, iv, 541pp, 37 ports. w/tissue guards. Thomas McKenney (1785-1859) was superintendent of Indian trade from 1816, then appointed head of the Bureau of Indian Affairs when it was created in 1824. McKenney was another who realized that the native cultures were doomed, destined to be overwhelmed by Euro-American expansion. He was therefore determined to save whatever images and information he could in his governmental position. He commissioned artists, primarily Charles Bird King (1785 - 1859), but others as well, to paint visiting native representatives when they came to Washington, dressed in their finest. In 1830 McKenney was relieved from his post by Andrew Jackson possibly in a dispute over the President's policy of Indian Removal and general treatment of the native population. With time now, McKenney decided to put together a volume with lithographs of the paintings, which by then had been transferred from the War Department to the Smithsonian "Castle." He hired James Hall who had written sympathetic articles on native Americans, to write biographies to accompany the lithographs. Hall had a difficult time, since McKenney never provided any notes or information on the people who were to be included in the publication. Hall spent eight years tracking down and researching those who could still be located to compile his text. McKenney had little to do with the publication beyond the initial planning, withdrawing in the financial Panic of 1837. At a subscription price of $120 for the 20 installments ($6 each), these folio volumes were out of the budget of most people, then the financial panic knocked out many of the original subscribers. Hall and the publishers (Biddle for Vol. 1, D. Rice and J.G. Clark for 2 and 3) completed the project, although at a loss, with the final installment released in Jan. 1844. As the native societies disappeared and Indian Wars continued, so did interest in these aboriginal inhabitants. In 1848 the first royal octavo edition was published, to make the work affordable to more people (and, presumably, try to cover the original expenses). In 1865, workers relocating the portraits inadvertently set the Castle on fire with a wood-burning stove. Only five portraits were saved, the other 295 were lost. Thus, the lithographs made for this project are the only survivors of what was once an extensive collection. Printings of octavo editions continued: 1854, 1855, up to 1870. This later edition saw the three volumes condensed into two, although it has only 20 fewer portraits than the original edition, and James Hall's name has been left off the title page. (Some of the later editions had as few as 50 portraits.) This edition also has the portrait of Billy Bowlegs, found only in post-1870 editions. The lithographs still have vibrant color, which they have admirably retained for over a century. Among those pictured are: Thayendanegea (or Brant, Great Captain of the Six Nations), John Ross (Cherokee), Pocahontas, Red Jacket, Sequoyah, Tenskautawaw (the Prophet), Makataimeshekiakiah (Black Hawk), Major Ridge, John Ridge, Keokuk, Kiontwogky (Corn Plant, Seneca), and many more. Condition: Slight shelf wear to volumes, especially head and foot of spines, wear to the cloth on the lower edges. Very minor foxing to just a couple of the plates, most clean and bright. 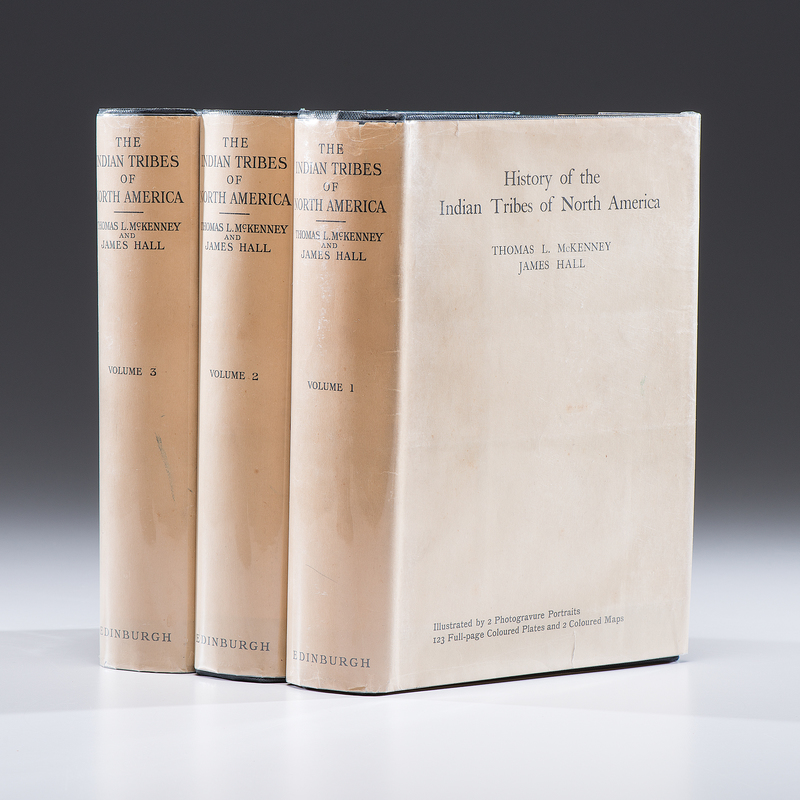 McKenney and Hall: History of the Indian 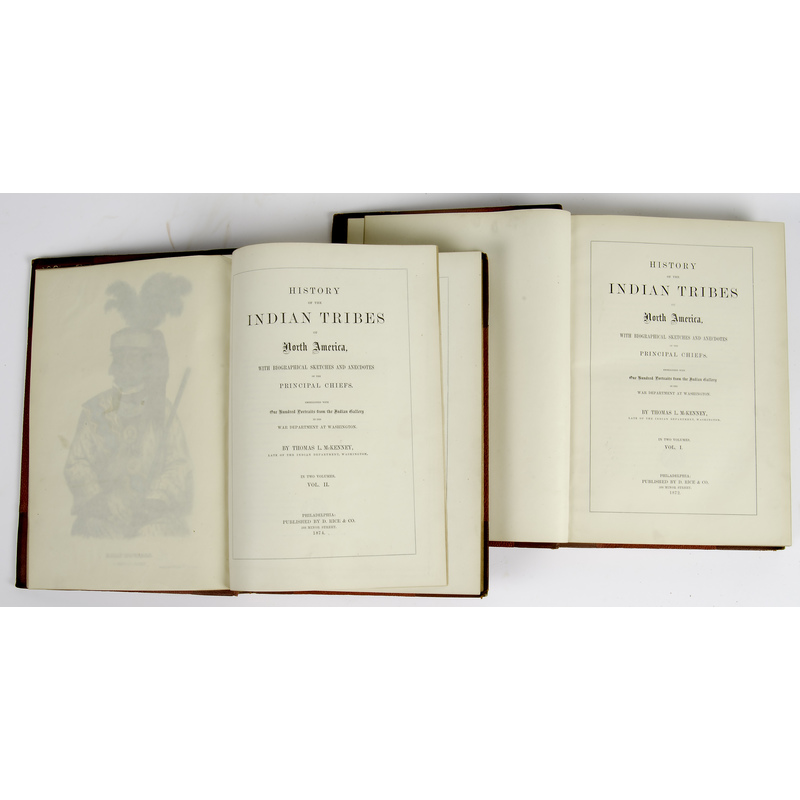 MCKENNEY. HISTORY OF THE INDIAN TRIBES.

McKenney (Thomas L.) - History of the In 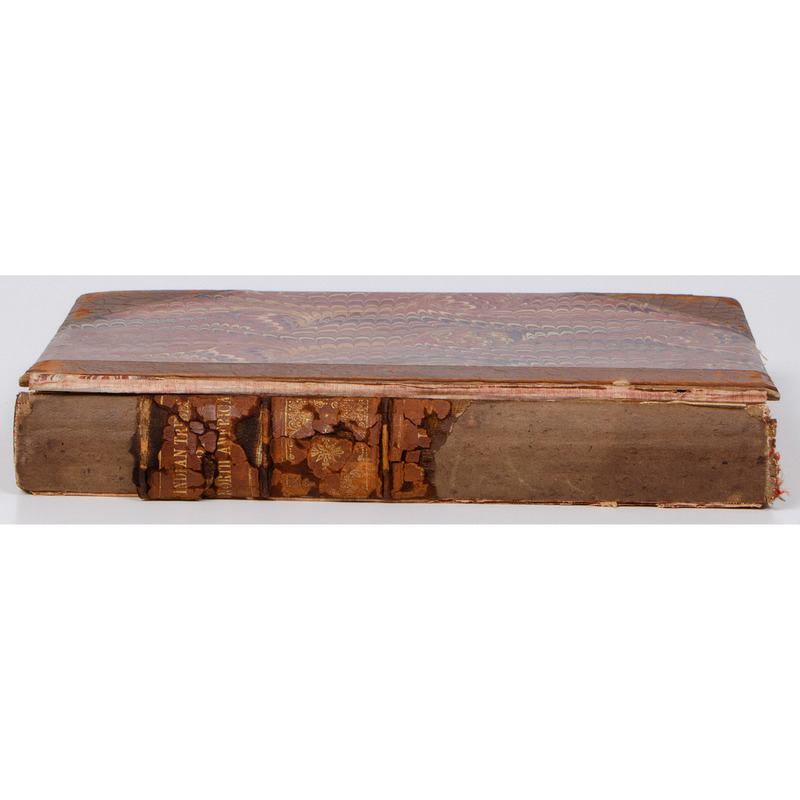 History of the Indian Tribes of North Am 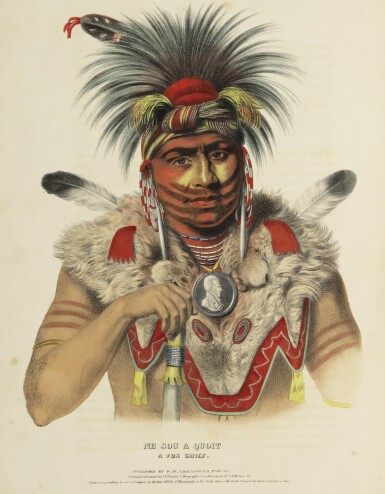 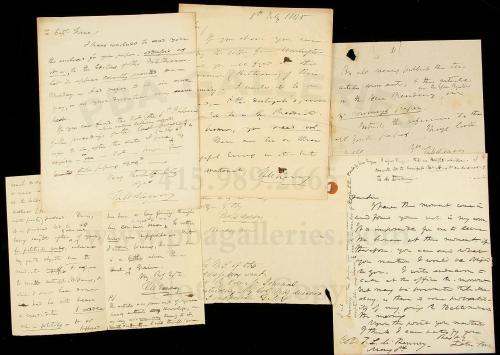 Archive of 18 letters, articles & other 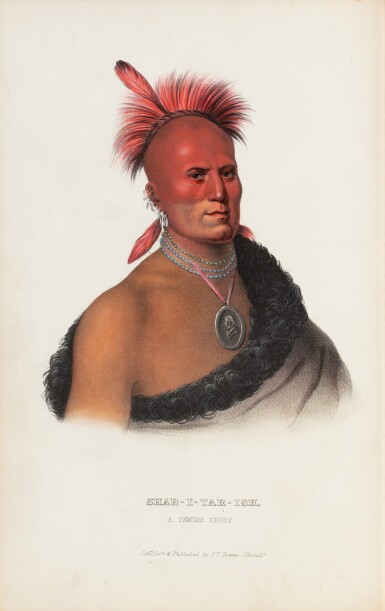 MCKENNEY - HALL. History of the Indians 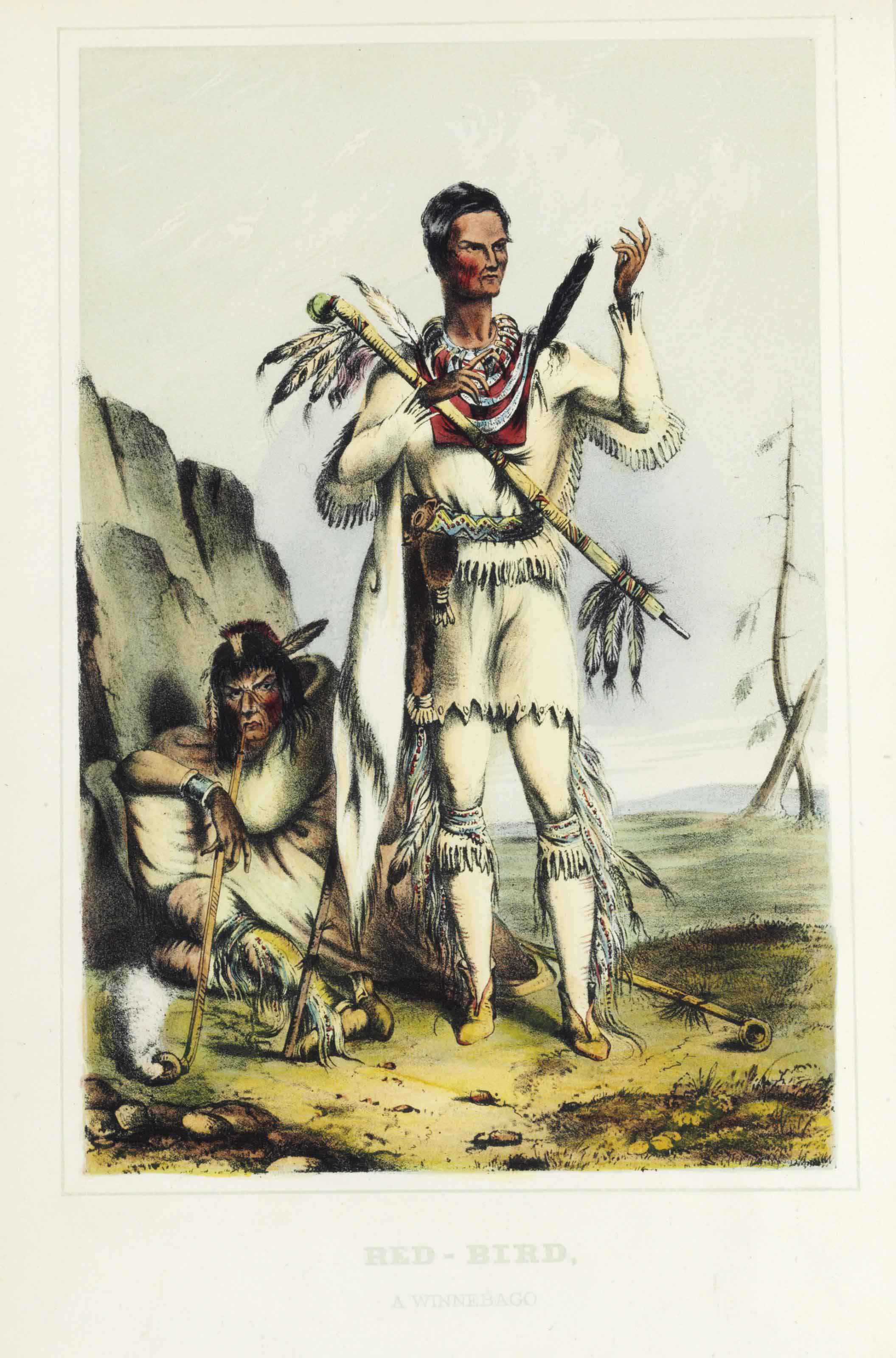