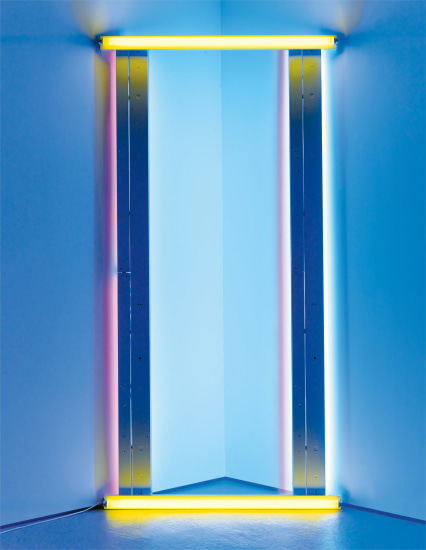 Dan Flavin Untitled (to Barnett Newman) one 1971 red, yellow, blue fluorescent light 96 x 48 x 9 in. (243.8 x 121.9 x 22.9 cm) This work is the sole fabrication from a planned edition of 5 and is accompanied by a certificate of authenticity signed by the artist.
Provenance Leo Castelli Gallery, New York Acquired from the above by the present owner Exhibited New York, Dwan Gallery, untitleds (to Barnett Newman) 1971 from Dan Flavin, March 6 - 31,1971 Literature C. Ratcliff, "Reviews and Previews," Art News 70, no. 2, April 1971, p. 12 W. Domingo, "New York Galleries: Dan Flavin At Dwan," Arts Magazine 45, no. 6, April 1971, p. 83, p. 82 (illustrated) drawings and diagrams from Dan Flavin 1963 - 1972, exh. cat., St. Louis Art Museum, St. Louis, 1973a, p. 76 A. Bertrand, Guide de la Collection: Carré d'Art, Musée d'art contemporain de Nîmes, Paris: Réunion des musée nationaux, Nîmes: Carré d'Art, Musée d'art contemporain de Nîmes, 2001, p. 56 (illustrated) M. Govan and T. Bell, eds., Dan Flavin: The Complete Lights, 1961-1996, New York: Dia Art Foundation in association with Yale University Press, 2004, no. 266, p. 296 (illustrated) Catalogue Essay "One might not think of light as a matter of fact, but I do. And it is, as I said, as plain and open and direct an art as you will ever find." Dan Flavin, 1987 Dan Flavin’s idea to create art from commercial fluorescent bulbs did not suggest an extraordinary feat, but through its masterful execution by the artist, the idea proved completely revolutionary. The fixtures, to be of varying sizes and only a few different colors, were to be arranged according to his exact direction each time they were assembled. The indifferent manner by which these concepts were conceived would not be indicative of their practice as implemented by the artist. The metamorphic properties of light, color, and space coalesced to form a primary tenant of the radical Minimalist movement, of which Flavin was both its pioneer and a champion. The present lot, dedicated to Flavin’s dear friend Barnett Newman who passed away in 1970, is an intellectual exercise in the oft-asked questions of the respective artists. Flavin deliberately used these sole three colors as a nod to a series of deeply revered paintings by Newman called Who's Afraid of Red, Yellow and Blue. Untitled to Barnett Newman one is an integral component of a sequence of four works first exhibited in 1971; when displayed together, the group would progress systematically to investigate notions of linear space and additive color.Through a finite visual vocabulary, Untitled to Barnett Newman one relentlessly explores the behavior of light in its otherworldly composition. Ablaze in a dance of chartreuse yellow and flaming red enveloped in an azure blue, the present lot radiates a glow that is at once harmonious in its warmth and wholly reserved in its stark simplicity. With the yellow fluorescent lights beaming outward to the viewer and framing the red and the iridescent blue, the blue and red emanate their light into the corner of the room, exploiting the forgotten perimeters. The austere lines of Flavin’s bulbs speak to Newman’s adroit handling of space cut by vertical lines in a picture plane, though the graceful flooding of light onto gallery walls mitigates this rigidity in Flavin’s work. Read More Artist Bio Dan Flavin American • 1933 - 1996 Dan Flavin employed commercially-sold fluorescent light tubes in order to produce what he liked to call "situations" or installations. His minimalist approach transcended simplicity through his use of neon colors and thoughtful compositions. With straight-edged light beams, Flavin would often create dynamic arrangements reminiscent of Fred Sandback's work with yarn. View More Works 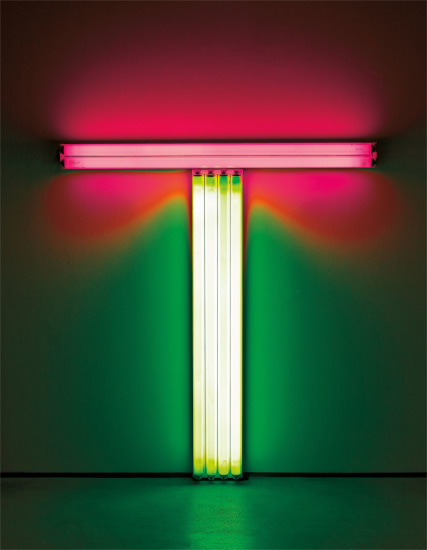 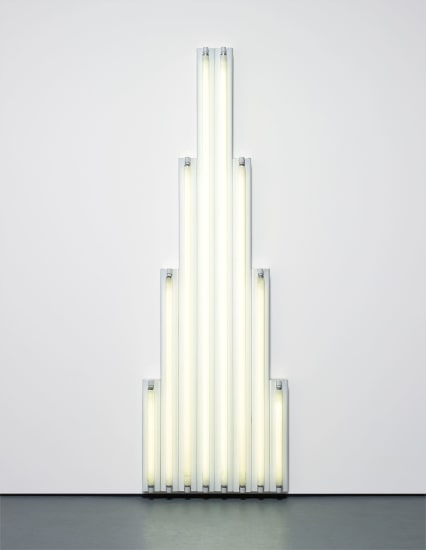 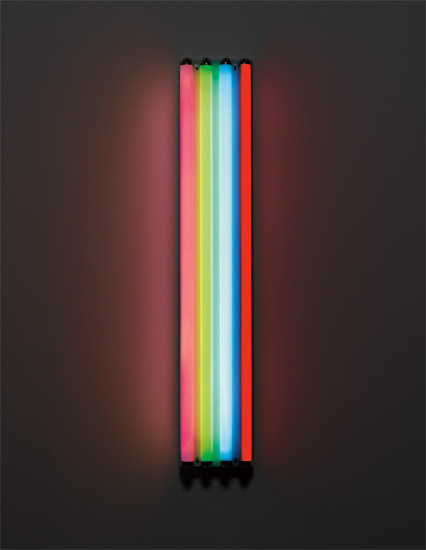 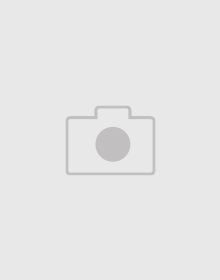 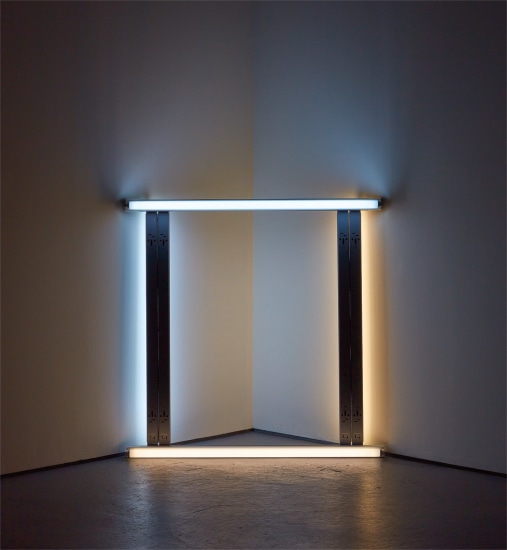 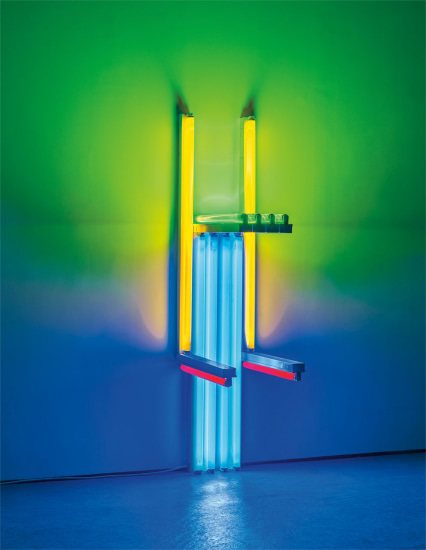 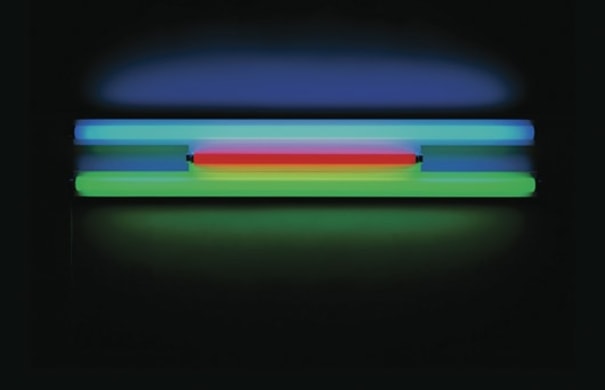 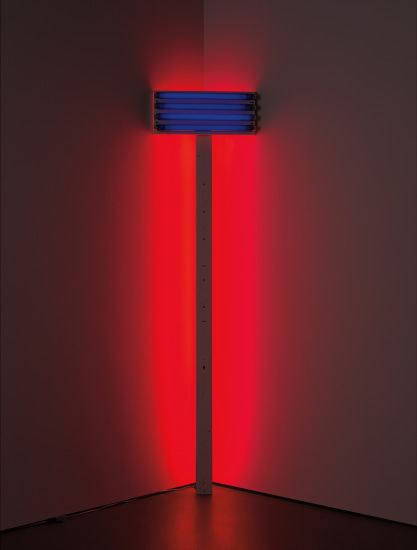 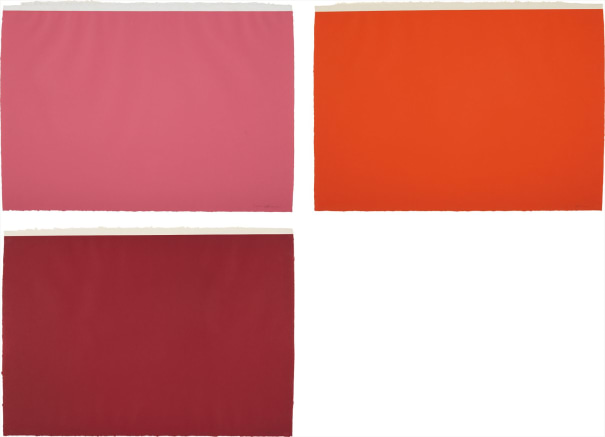 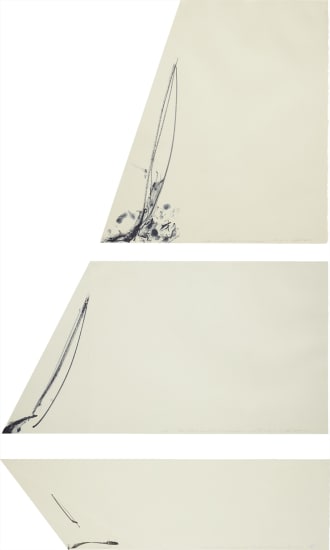