First Voyage] - John HAWKESWORTH. An Account of the Voyages undertaken… for making discoveries in the Southern Hemisphere.
London: for W. Strahan & T .Cadell, 1773. 3 volumes, 4to (280 x 222 mm). 52 plates, maps and charts (39 folding). Second edition of vols.I and II, including Hawkesworth's reply to Mr. Dalrymple, and first edition of vol.III. Cf. Beddie 648 and 650; cf. Hill (2004) 782 and 783. [Second Voyage] - James COOK A Voyage towards the South Pole, and around the World. London: for W.Strahan & T.Cadell, 1779. 2 volumes, 4to (280 x 222 mm). Engraved portrait frontispiece of Cook by J. Basire after W. Hodges and 63 engraved plates, charts and maps (30 folding), 1 folding letterpress table. Condition : plates XXXVI and XXXVII in vol.I shaved as usual, portrait shaved, plate LXI facing p.342 in vol.I expertly repaired. Third edition. Beddie 1226; cf. Sabin 16245. [Third Voyage] - James COOK & Captain James KING A Voyage to the Pacific Ocean… for making Discoveries in the Northern Hemisphere. London: H. Hughs for G.Nicol & T.Cadell, 1785. 4 volumes (Text: 3 vols., 4to [280 x 219 mm]; Atlas vol. of plates: 1 vol., large folio [537 x 387 mm]). Text: engraved title vignettes, 1 folding letterpress table, 24 engraved maps, coastal profiles and charts (13 folding). (Charts number 80 and 81, here facing pp.409 and 420 in vol.II, shaved at the outer edge). Atlas vol.: 63 engraved plates, plans and maps only (2 folding). Second (and best) edition. Beddie 1552; Forbes Hawaiian National Bibliography 85; cf. Sabin 16250. Expertly bound to style in 18th-century diced russia, covers with decorative roll tool border, spines divided into six (text) or eight (atlas) compartments by horizontal fillets and decorative rolls, red morocco lettering-piece in the second, green morocco label in the fourth, with small onlaid oval of red morocco bearing the volume number of the text vols. or the word 'Atlas' (on the atlas vol.), the compartments otherwise decorated with star and circle tool at each corner and large centrally-placed star tool (in three, or five, compartments) or fouled-anchor tool (in one compartment), sprinkled edges a fine complete set of all three of cook's great voyages of discovery: 'the basis for any collection of pacific books' (hill) . Combined first and second edition of the first voyage, third edition of the second voyage and second edition of the third voyage. There is little to choose between a late issue of the first edition of the first voyage and a second edition as both include the 'directions for placing the cuts' and a map of the Straits of Magellan that are missing from the early issue of the first edition, but the second edition also includes Hawkesworth's answer to Mr. Dalrymple. Other than the wording of the titles, there is basically no difference between the first four editions of the second voyage.The typography of the second edition text of the third voyage is generally considered superior to the first (Hughs took over the printing from Strahan and re-set all the text). Contemporary support for this view is reported by Forbes who quotes an inscription in a set presented by Mrs. Cook to her doctor, Dr. Elliotson, which notes '…the second edition being much superior to the first both in paper & letterpress." 'The famous accounts of Captain Cook's three voyages form the basis for any collection of Pacific books. In three great voyages Cook did more to clarify the geographical knowledge of the southern hemisphere than all his predecessors had done together. He was really the first scientific navigator and his voyages made great contributions to many fields of knowledge' (Hill). Cook's first voyage included visits to Tahiti and New Zealand, and the tracing of the east coast of Australia was one of the most perilous feats of navigation in the whole recorded history of exploration. The second voyage pushed further south in search of a southern continent than any previous navigators, as well as visiting numerous Pacific islands. The third voyage returned to islands previously visited, discovered Hawaii, and explored the northwest co

COOK, Capt James A complete set of the v 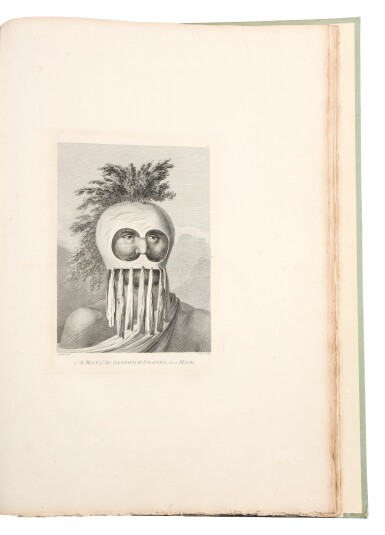 COOK, Captain JAMES. A set of the three

COOK, Captain JAMES. A set of the three