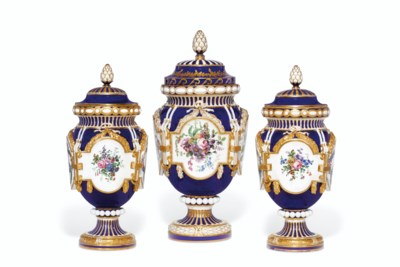 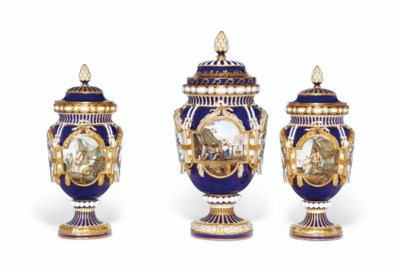 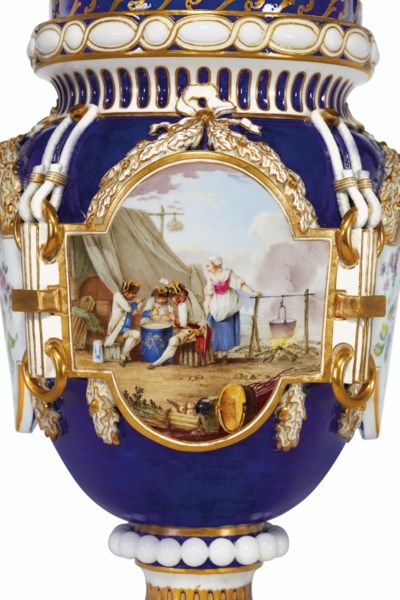 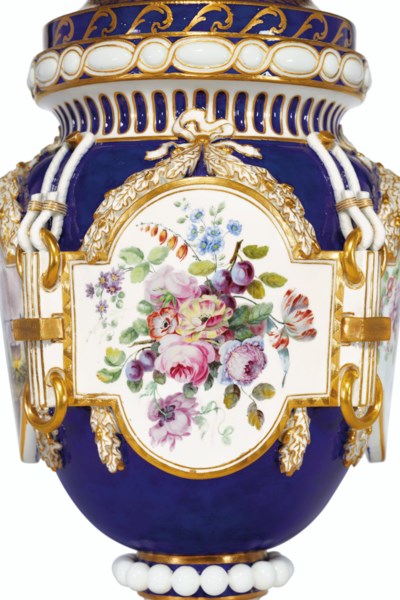 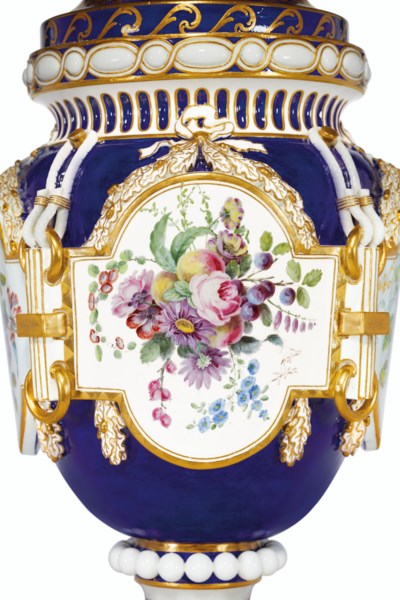 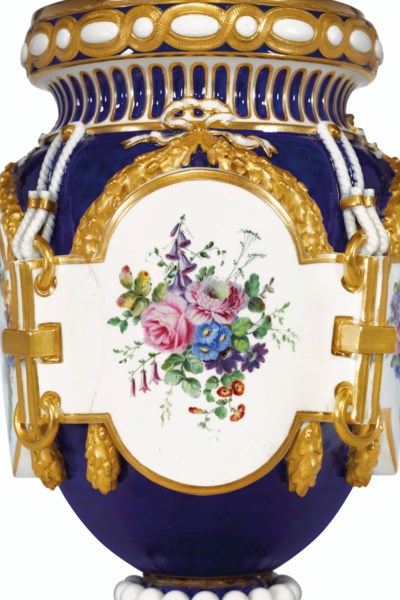 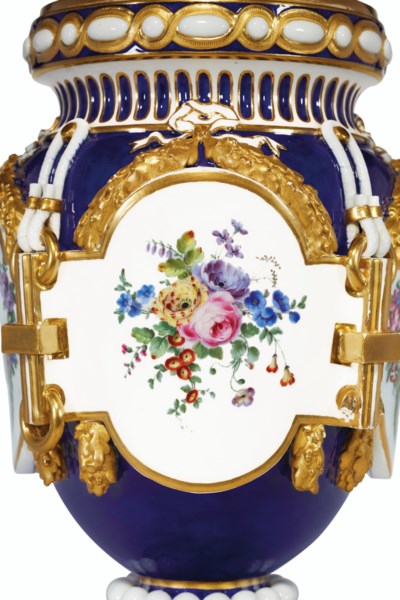 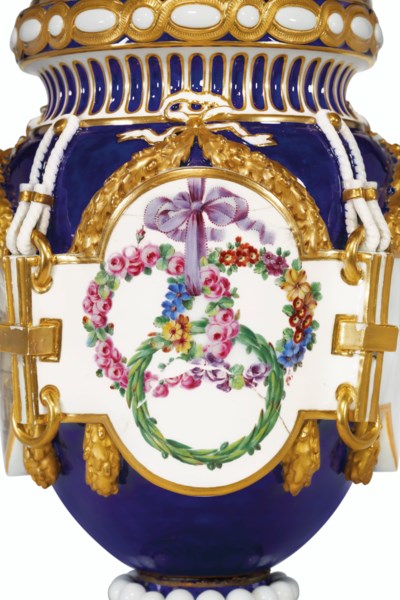 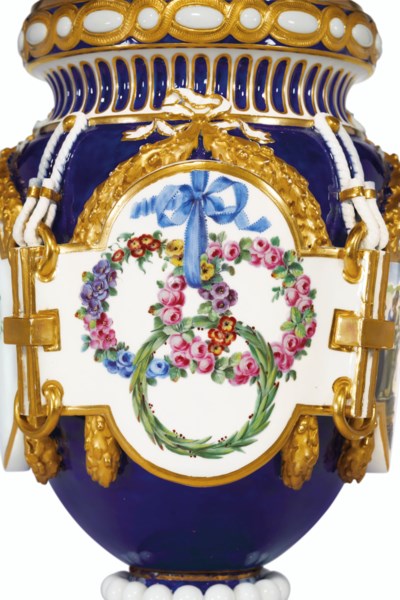 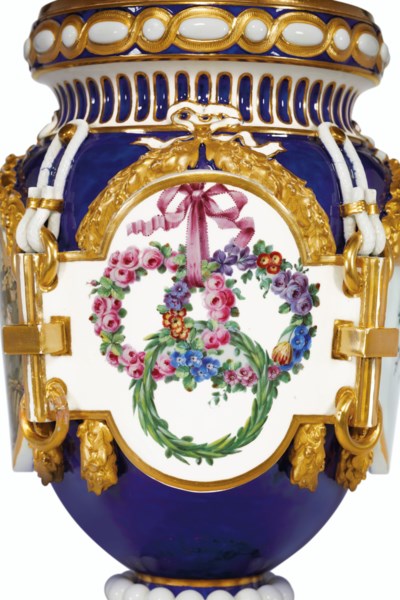 A SEVRES PORCELAIN BEAU BLEU GARNITURE OF THREE VASES AND COVERS ( VASES 'FERRES' 1ER ET 2EME GRANDEUR ) CIRCA 1776, ONE WITH BLUE INTERLACED L'S MARK AND AN INCISED L, ANOTHER WITH AN INCISED SQUARE, THE SCENE PAINTING ATTRIBUTED TO JEAN-LOUIS MORIN Each finely painted with a military encampment scene, the side and back panels of the larger central vase each with a loose bouquet, the side panels of the two flanking smaller vases with three ribbon-tied interlocking wreaths of pink roses, berried laurel or various flowers, the back panels with a loose bouquet, all three cover finials English porcelain replacements 17 ¼ in. (43.8 cm.) high (the largest) Provenance Very possibly the single vase Ferré of the first size and the pair of the second noted in the factory sales records for 1777 as having sold to the king in 1776 (SCC Vy3, 199 recto & verso). Alfred de Rothschild (1842-1918), acquired in 1887 (this date first noted in the Walters sale catalogue of 1941), Seamore Place, London. By descent to his natural daughter The Rt. Hon. Almina, Countess of Carnarvon; Christie’s King Street, 19 May 1925, lot 259 (£1050 to A. Seligmann). With Arnold Seligmann, Paris. Mrs. Henry Walters, Baltimore, Md. (by whom acquired from the above); Parke-Bernet Galleries, Inc., 3 May 1941, lot 1364 ($2,900 - color illustration). The Property of a New Jersey Foundation; Sotheby’s, New York, 31 October 1981, lot 104 ($13,000). With Dalva Brothers, New York. An Important Private Collection, Long Island, acquired from Dalva Brothers in January 1999. 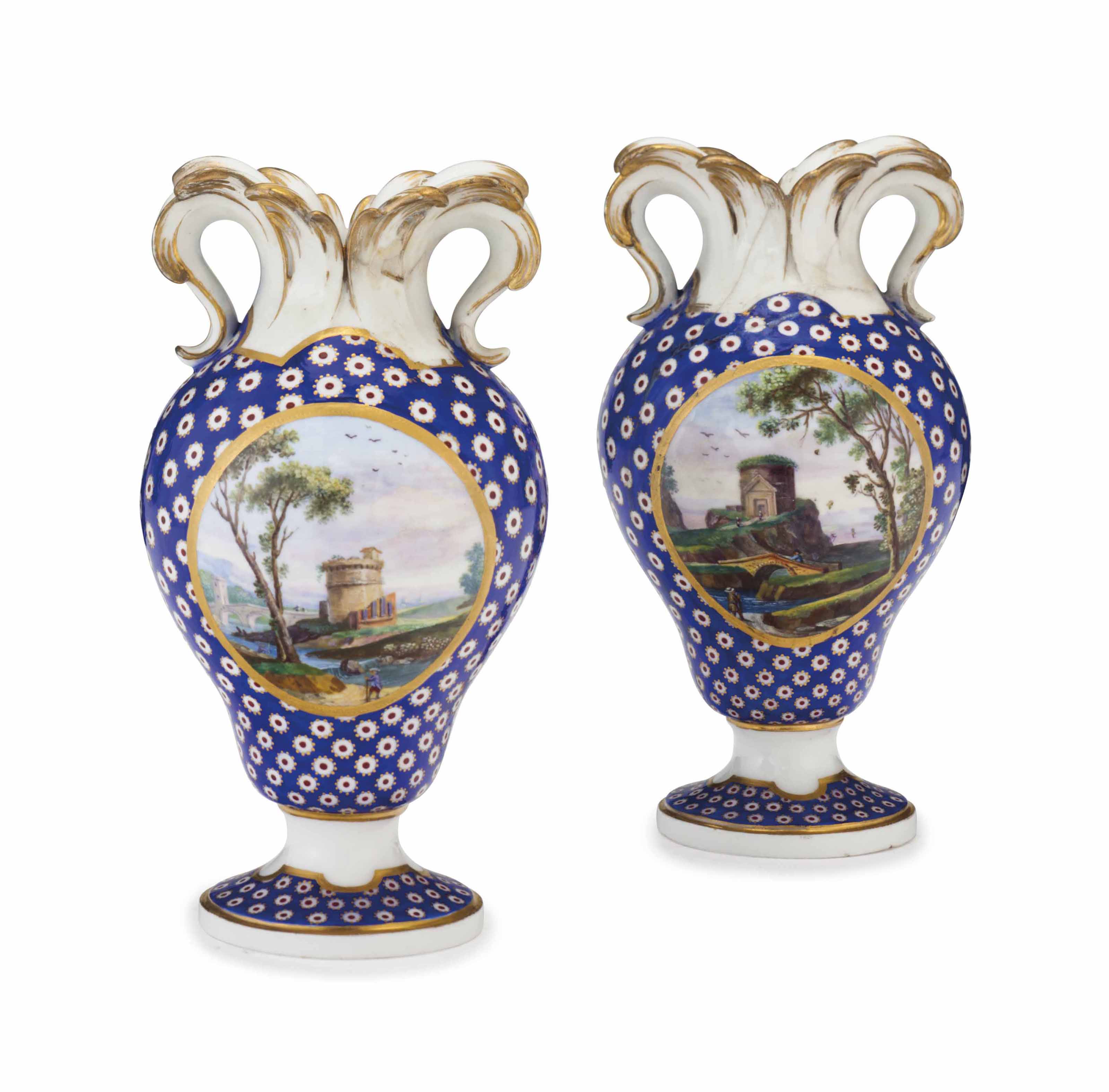 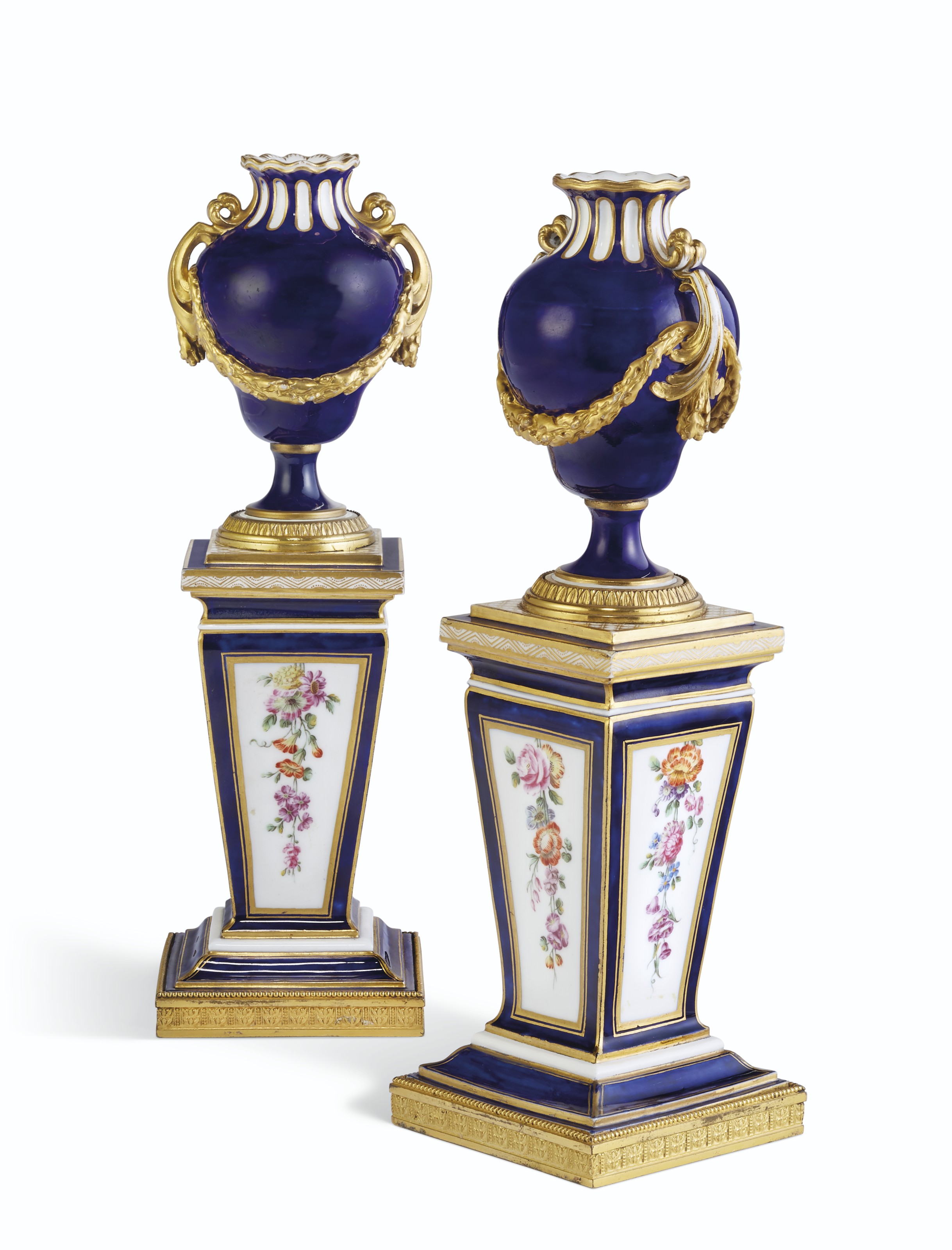 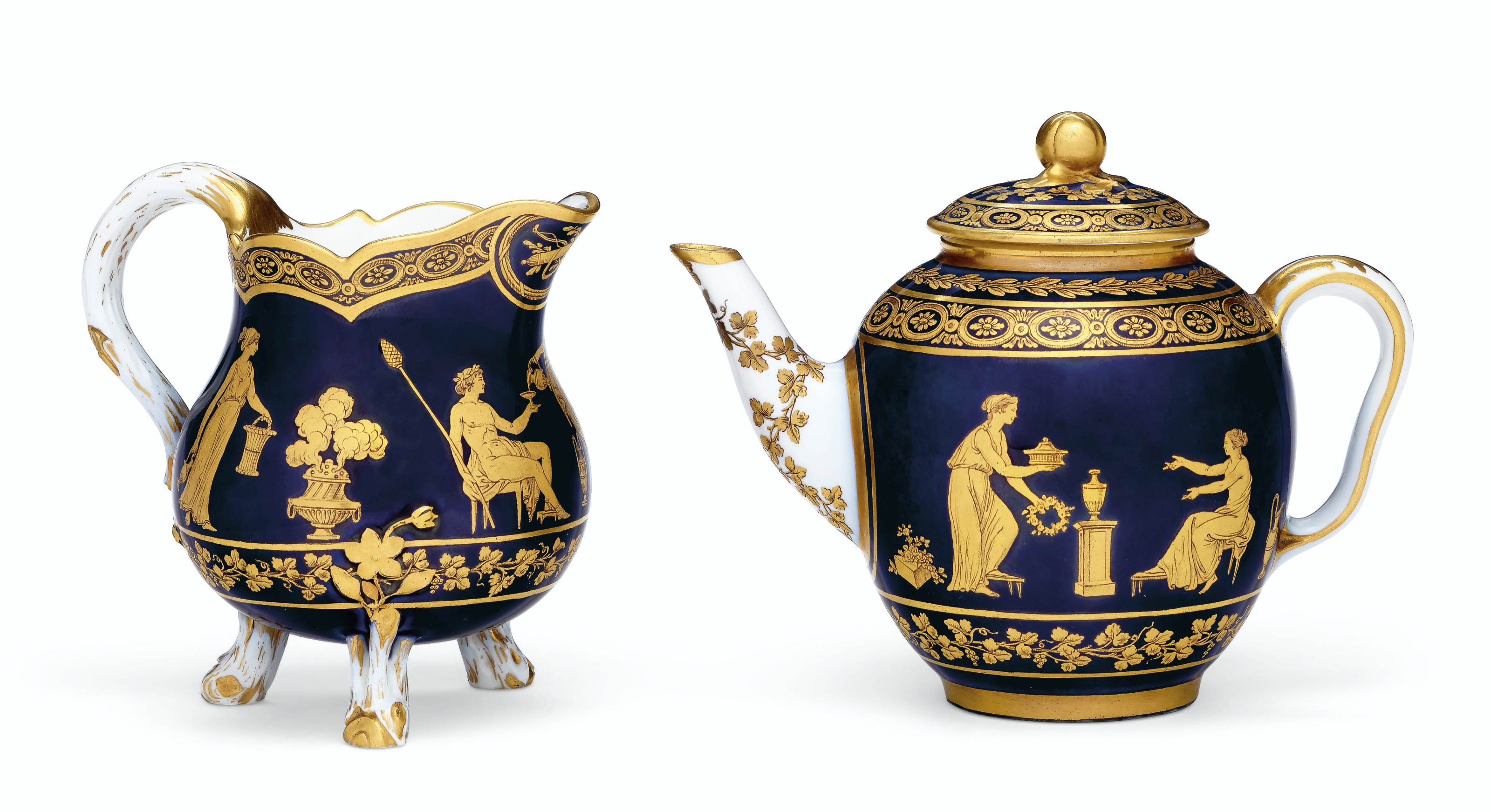