ISIDORUS HISPALENSIS (ca 560-636). Etymologiae . [Augsburg:] Günther Zainer 19 November 1472.
ISIDORUS HISPALENSIS (ca 560-636). Etymologiae . [Augsburg:] Günther Zainer 19 November 1472. Chancery 2 o (311 x 208 mm). Collation: [1 4 ; 2 1 0 (6+1) 3-13 1 0 14 8 (+- 3;3+1) 15-24 1 0 25 8 ; 26 1 0 27 1 0 (9+2)]. 264 leaves. 38 lines, the table in double column. Type: 3:107R. Three full-page woodcuts on 14/5v and 14/6r-v (foredges cropped within image), small woodcut map on 19/7v. Small woodcut mathematical and lunar symbols in text on 6/1r,2r and 6/8r. 3-, 5- 6- and 7-line initial spaces, printed guide-letters in quires 23-25 only; spaces for Greek words in the text. Initials, capital strokes and part numbers supplied in red. The table with printed word "Finit" as in BMC IB. 5440. (12/6 with marginal repaired tear, 15/5 with two pale stains, 21/3 and 4 with pale marginal dampstain, 27/11 with inner margin renewed, some occasional pale browning at extreme top margin.) Early 18th-century russia gilt, spine gilt, Wodhull's arms in gilt at center of front cover (rebacked preserving original spine panel). Provenance: Michael Wodhull (1740-1816), noted book collector and bibliophile, classical scholar and first English translator of Euripides, who "bought with great judgement," according to de Ricci (signature and note of purchase of 1 May 1794 from the Hayes sale, purchased for 5s 5d, binding for a cost of 17d) -- Wodhull-Severne sale, 1886, lot 1344 -- Hans Meyer (manuscript ex libris) -- Clifford Rattey (bookplate) -- Acquired from Jacob Zeitlin, 1972. FIRST EDITION, CONTAINING THE FIRST PRINTED MAP OF THE WORLD. THE ENCYCLOPEDIA OF "INFINITELY GREATER IMPORTANCE" THAN ANY OTHER PRINTED IN THE FIFTEENTH CENTURY ( PMM ). Based principally on late Latin compendia, the Etymologiae provided to medieval and Renaissance scholars an invaluable single source of late classical scientific knowledge and lexicography. "An encyclopedic dictionary is too disconnected to present a scientific world view; but Isidore carefully and quite accurately preserved much of the scientific lore current late in the Roman period, when original work had long since ceased and facility in Greek had perished" ( DSB ). "An industrious and uncritical compiler, he supplied factual as well as fantastic information culled from all the ancient authors available to him (and incidentally preserved much material that has since been lost). Isidore thus became the chief authority of the Middle Ages and the presence of his book in every monastic, cathedral, and college library was a main factor in perpetuating the state of knowledge and the modes of thought of the late-Roman world" ( PMM ). Treated are mathematics, astronomy, geography, meteorology, geology, botany, agriculture, human anatomy, medicine, shipbuilding, architecture and other technological subjects. In book III, "De vocabulario arithmetice discipline," is the first printed reference to arithmetic (see Margaret Bingham Stillwell, The Awakening Interest in Science during the First Century of Printing 180). This is the first book printed in Zainer's roman type, which he had used previously only in a broadside calendar printed at the end of 1471 (GW 1293). The woodcut illustrations show trees of consanguinity and affinity and a large diagram of family relationships in the form of a wheel. Of greatest interest is the small mappa mundi cut, which is THE FIRST PRINTED MAP. It is the most rudimentary of T-O maps, a type which originated in the 5th century B.C., and was perpetuated, in a Christianized version, in manuscripts of the Etymologiae from the 8th century. In this basic type the disc of the world is divided into three zones separated by a T-shaped Mediterranean Sea, with Asia uppermost, and Europe and Africa in the two lower sections, the whole circumscribed by the world ocean. Each continent bears the additional name of the son of Noah who was said to have settled it. In this edition chapter 3 in Book 1, "De latinis litteris," is erroneously repeated in place of the very short text of chapter 14, " 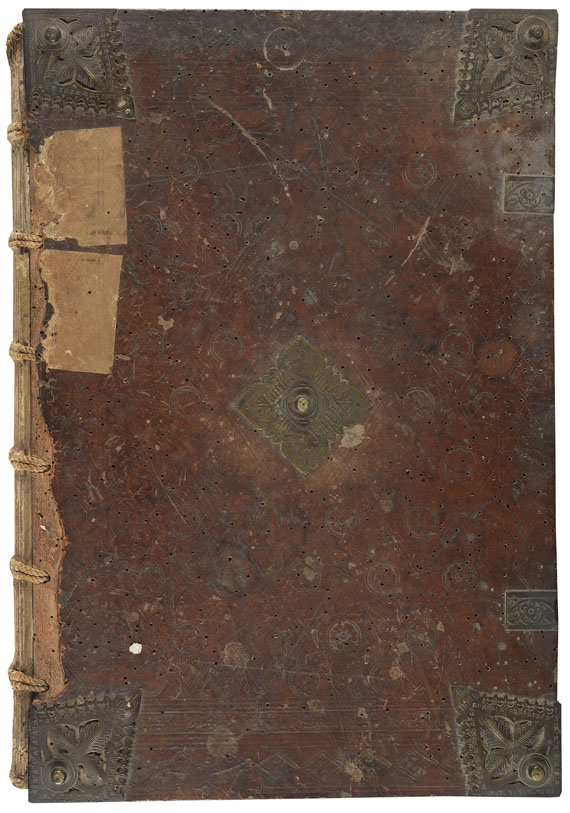