WORLD WAR II] "We Remember:" The Important Tribute Albums Presented to Lawrence R. Kelly, an American Casualty of the Liberation WORLD WAR II] "We Remember:" The Important Tribute Albums Presented to Lawrence R. Kelly, an American Casualty of the Liberation . [St. Cloud, France: circa August 1946]. Two large volumes comprising approximately 710 leaves of original artwork, vintage photographs, prints, letters, over 1000 signatures and various ephemera all in tribute of Kelly. The texts mostly in French with English translations provided. 12 5/8 x 10 ½ inches (32.5 x 27 cm). A title page reads in French and English "Lawrence R. Kelly. Symbol of the American Soldier/Liberator of France" and a manuscript copyright page attributes the work to pharmacist Marcelle Thomas (discussed below). Finely bound in red morocco over vellum boards signed "L. Leveque & R. Mondange/ Paris 1946", the covers are paneled in gilt with the text "Saint-Cloud France 'We Remember' To Lawrence R. Kelly" surrounding the arms of Saint-Cloud stamped in gilt within a blue morocco inlay, the rear covers inlaid with an American flag in red, white and blue morocco with gilt stamped stars beneath, the spines stamped in gilt with "25 AOUT 1944" between gilt rules, a central red, white and blue morocco circular device is inlaid at the center of each spine and surrounded by gilt stamped stars, all edges gilt, the inside cover of volume I with a etched metal plate depicting the chains of Nazism broken by a sword, fine stenciled endpapers with a gilt star motif, each volume housed in matching paper covered slipcases. The lot accompanied by the Purple Heart Medal awarded to Kelly. Very well preserved but with a some thumbsoiling to margins and a few early leaves becoming sprung, some very minor spotting or offsetting, a few nicks to spines, the vellum lightly thumbsoiled, upper cover edge of volume II with an unobtrusive red stain likely from slipcase, the vellum lifting causing a split to the flag designs on rear boards. AN ASTOUNDING TRIBUTE TO A FALLEN AMERICAN SOLDIER FROM A GRATEFUL FRANCE UPON LIBERATION. LAWRENCE KELLY, ACCIDENTALLY WOUNDED ON AUGUST 25th 1944, THE FIRST DAY OF LIBERATION, BECOMES A SYMBOL OF FRANCO-AMERICAN GOOD WILL IN THE FINAL DAYS OF WORLD WAR TWO IN TRIBUTE ALBUMS ENVISIONED BY THE PHARMACIST WHO NURSED HIM. A poem in the first pages of these remarkable volumes announces what will follow within: "They came so simply/proud to give their lives/or suffering stoically/to bring us our liberty/in the name of Frenchmen, thank you, KELLY/that shall not be forgotten." This is followed by dedication leaves in both French and English reading "From the Inhabitants of Saint Cloud to Staff Sergeant Lawrence R. Kelly who landed in France on D-Day and was the first American Liberator of their City where he was Grievously Wounded on August 25th 1944 and to the Glorious American Army as a Token of our Heartfelt Gratitude." What follows is an extraordinary array of artistic and manuscript tributes to Kelly including TWO RARE VINTAGE PRESS PRINTS OF THE D-DAY LANDING AT NORMANDY BY ROBERT CAPA AND ROBERT SARGENT (6 x 8 ¾ inches), and a group of about twelve related images from the invasion; original artwork by MARIE LAURENCIN, KEES VAN DONGEN, GEORGES LEROUX, PAUL LANDOWSKI, GUSTAVE LORAIN, GEORGE EDMUND DARGOUGE, OCTAVE GUILLONNET, RENE CREVEL and minor listed artists including Albert Decaris, Louis Roger, Henri Morin, Claude Maurel and others. Also within are numerous personalized letters including one from noted scholar ANDRE CHEVRILLON who recounts what happened to Kelly that day: "Paris and the suburbs had just risen in arms against the oppressors. The Germans were in full retreat, but a few were left here and there hidden in the cellars of firing from the roofs. In the general excitement of that day an unfortunate fireman mistaking you for an enemy, as you were drawing near the bridge, sent several shots at you with his Tommy gun. You were then carried to Mademoiselle Thomas's pharmacy at the bottom of the Rue Dailly and were taken care of there. You were severely wounded. You r 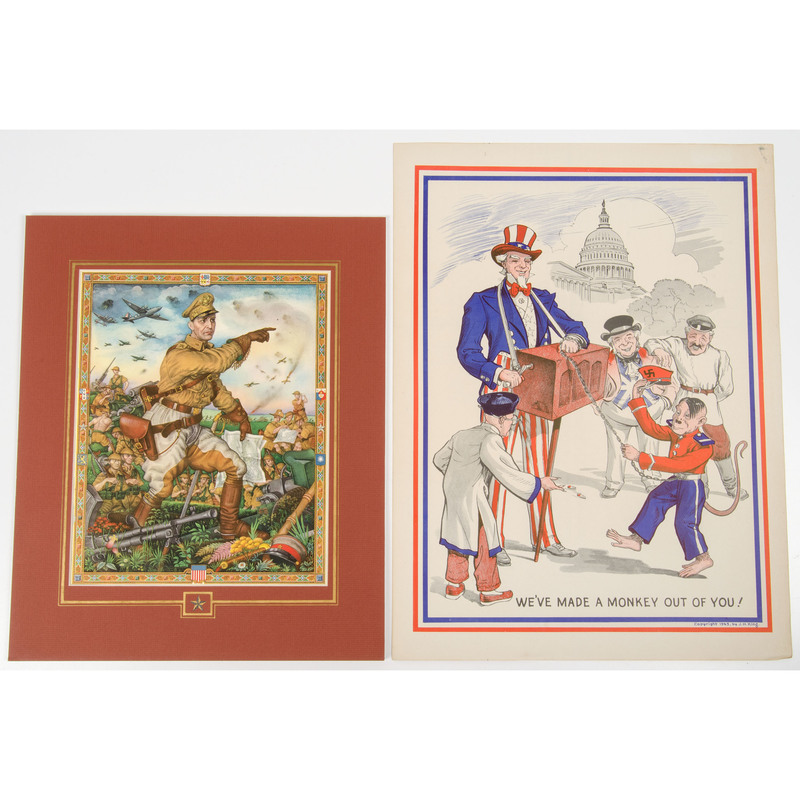 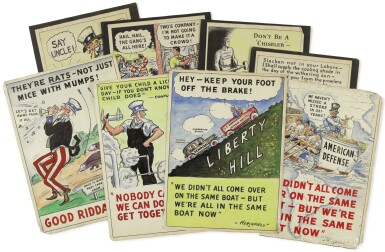