William Gale (British, 1823-1909) The Captured Runaway signed with monogram and dated '1856' (lower right) oil on canvas 127 x 96cm (50 x 37 13/16in). Fußnoten Provenance Anon. sale, Sotheby's, London, 17 March 1999, lot 61. The Fine Art Society, London. Private collection, UK. Exhibited London, Royal Academy, 1856, no. 560. London, The Fine Art Society, Spring 2000, no. 3. Literature James Dafforn, British Artists, Their Style and Character, number LXXXIX – William Gale, Art Journal, London, 1869, pp. 373-5. Jan Marsh, From Slave Cabin to Windsor Castle: Josiah Henson and "Uncle Tom" in Britain, 19th Century Studies, Manchester, NH, 2002, vol. 16, p. 38. William Gale's 1856 painting The Captured Runaway shows a female slave or indentured servant held captive by a male bounty-hunter. The two figures occupy a cabin of split-log construction and are shown by lamplight. She crouches on the earthen floor and wears a striped cotton dress. Her expression of fear and distress, with eyes upturned seemingly in hope of spiritual salvation, speaks of her fear of the cruel punishment that will await her when she is returned to the household or plantation estate from which she must previously have escaped. By contrast, her captor is warmly dressed in a fur cap and coat as he sleeps after the exertions of hunting down the woman who is now his prisoner and to whom he has attached handcuffs to prevent her escape. Littered around are items that give a clue to the activity by which the man makes his living: on the right side, leaning against the cabin's wooden wall is a musket while hanging on a hook are seen a whip and a gunpowder flask. On the left side appear a pair of long leather moccasins, decorated with beads. On the table upon which the hunter rests his right arm are a compass and a clasp-knife along with a bottle and glass and a plug of tobacco. Making the subject of the painting absolutely clear, there is also seen a hand-bill with the printed announcement that a reward of five hundred dollars will be paid to the individual who succeeds in apprehending the 'Ranaway', and with a crude illustration of a young black girl looking over her shoulder in fear at the prospect of imminent capture. Under the table is seen the head of a blood-hound or mastiff, while on the right side may be seen a crust of bread thrown to the captive. In the middle years of the 19th century escaped slaves were assisted to gain their freedom by a system known as the Underground Railroad, whereby individuals and groups of fugitives were passed from one safe house to another and which was operated to transport men and women northwards to Canada (and where they might gain their liberty as slavery had been made illegal in the British Empire in 1834). Possibly as many as 100,000 escaped slaves made this journey to freedom via the 'Railroad'. However, many 'slave catchers' – men who worked with and were rewarded by U.S. Federal marshals, operated – so that the likelihood of being re-captured was high, and especially so for black women travelling on their own and who were particularly conspicuous and at risk. Local newspapers throughout the eastern United States carried advertisements alerting those who sought to make their livings by the business of capturing escaped slaves to the presence of such folk. It is not known for certain whether the British artist William Gale visited the United States but it seems likely as the representation of the American interior appears so directly observed. This appears to be Gale's only subject on an American modern-life theme (although in 1858, two years after the present work was exhibited at the Royal Academy, he showed a pair of subjects from Longfellow's poem 'Evangeline', which presumably also required American accoutrements and settings). Slavery was of course an issue which commanded the attention of a wide and international public in the middle years of the 19th century. In 1840 the World Anti-Slavery Convention was held in Lo 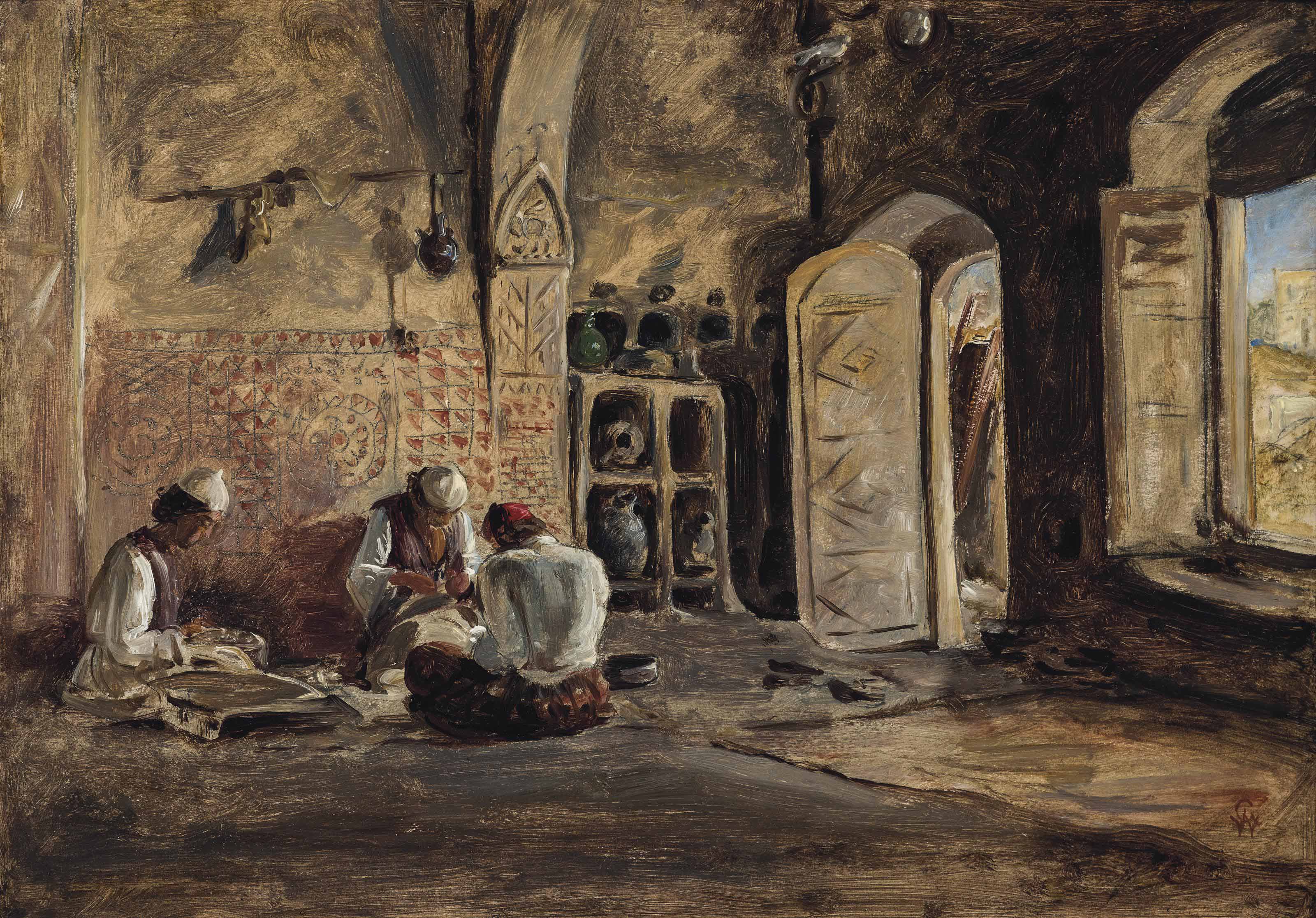