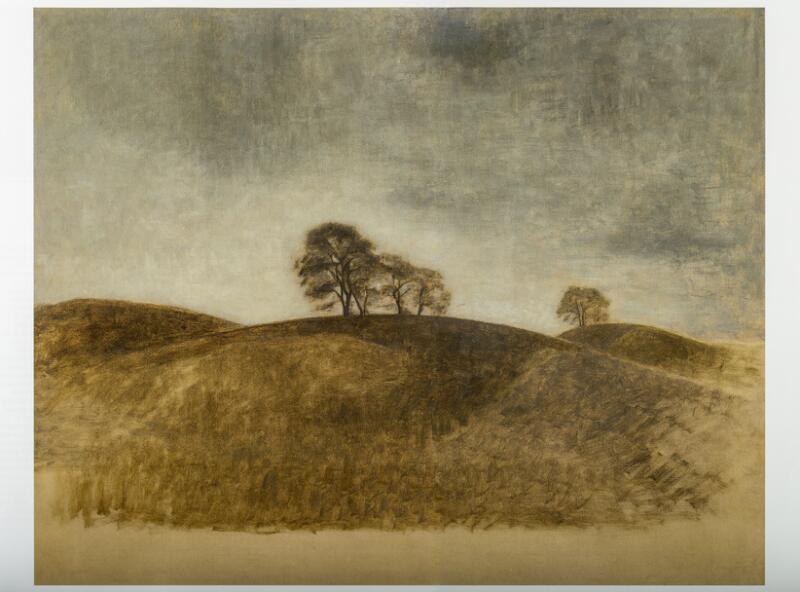 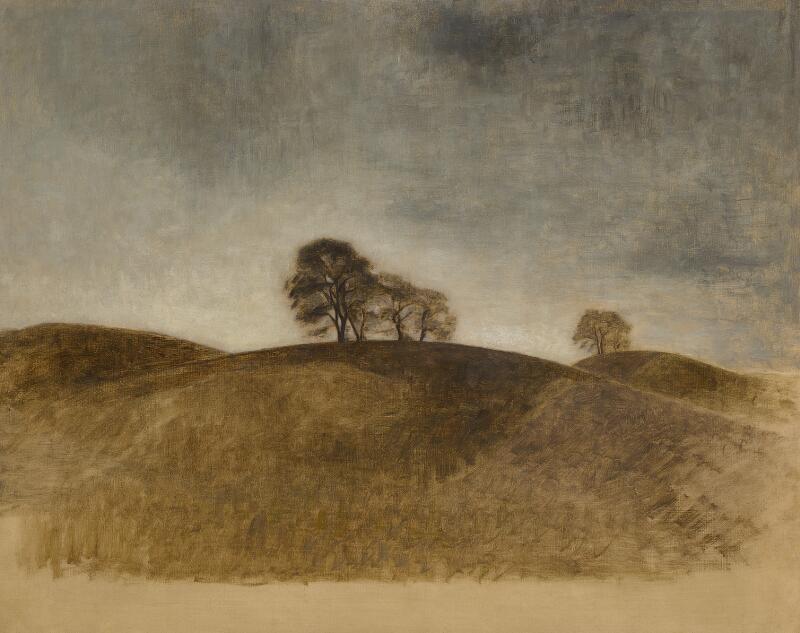 Landscape from Dunkebakke, Frederiksværk. Unsigned. Oil on canvas. 55×65 cm. Kursiv: FROM THE COLLECTION OF J.E. SAFRA Susanne Meyer-Abich, A Catalogue Raisonné of the Works of Vilhelm Hammershøi in “Vilhelm Hammershøi: Das Malerische Werk”, 1995, no. 245. Exhibited: Ordrupgaard, “Vilhelm Hammershøi - en retrospektiv udstilling”, 1981 no. 103, reproduced p. 131, with the title 'Landskab. Studie'. Wildenstein, New York and The Philips Collection, Washington, “Hammershøi. Painter of Stillness and Light”, 1983 no. 65, reproduced p. 76, with the title 'Landscape sketch'. Kunsthalle der Hypo-Kulturstiftung, München, “Hammershøi and Europa”, 2012, reproduced p. 245. Literature: Poul Vad, “Hammershøi. Værk og Liv”, 1988, mentioned p. 256, reproduced p. 283. Poul Vad, “Hammershøi and Danish Art at the Turn of the Century”, 1992, reproduced p. 283. Provenance: Barrister Peter Olufsen. Gerda og Peter Olufsen (1981,1983). Kunsthallen Kunstauktioner, Copenhagen, auction 497, 1998 no. 103, reproduced p. 45. Here acquired by the present owner. Barrister Peter Olufsen (1891–1972) was married to Kamma Sophie Ilsted (1894–1928), who was the daughter of Vilhelm Hammershøi's very good friend and brother-in-law Peter Ilsted. The painting was passed on to his son Peter Olufsen (1919–1997), who was married to Gerda Pullen Ullman. “I have mostly painted interiors ... How did I end up doing this? ... It's difficult to say. It just happened. And it is fashionable right now, everyone wants interiors, they hardly want anything else. When I paint a landscape, I usually can't sell it.” (Interview with Vilhelm Hammershøi in the Danish magazine “Hver 8. Dag”, 1907). As the quote above shows, the interior was already Hammershøi's most popular and sought-after motif during his own lifetime. Therefore, Hammershøi's name is inseparably linked to the simple, poetic and grey-toned interior, which provides a quiet enigmatic insight into the soul of human existence, and as such the painter is recognized as one of the most central figures of Symbolism at the turn of the century. But Hammershøi also painted landscapes throughout his life, and the landscape constitutes a large and important part of his oeuvre. They were often painted during one of his and his wife Ida's summer holidays around Denmark. This includes the painting here of the landscape at Dunkebakke, which was painted in 1904, while the couple during the summer lived in a small house at Arresødal near Frederiksværk in North Zealand. An area that inspired several of Hammershøi’s landscapes. The style of the artist’s landscapes originates from the Danish golden age tradition, as we know it from artists such as Peter Christian Skovgaard, Christen Købke and Johan Thomas Lundbye. Hammershøi had been a student of Vilhelm Kyhn and Frederik Rohde, both landscape painters trained during the Danish golden age. But in contrast to the golden age's classic depiction of the landscape with a foreground, middle ground and background in a spatial progression in the perspective, often illustrated by a path or road that leads us into the fictional deeper space of the painting, Hammershøi's landscapes are instead parallel-plane compositions, focusing on the middle ground. “Instead of painting the intensely emotional but unsentimental connection to the landscape on the canvas, he portrayed the dual experience of intense feeling and insurmountable distance; and instead of painting the foreground and the background in the successive progression into the space of the landscape, he left out everything that could draw attention to the foreground and focused sharply on the middle ground; he based the image on the dialectic between the measurable extent of the horizontal plane (from edge to edge of the frame) and the immeasurable deep space of the air (and the sky)”. (Poul Vad p. 152). In this landscape, the foreground is completely naked. The colours are delicate green-brown and transparent.
Condition report on request. Please contact: [email protected]