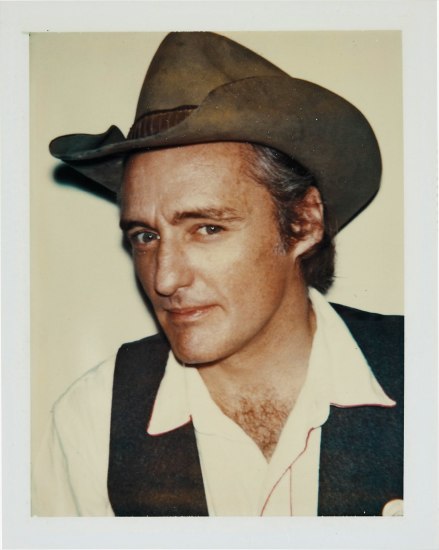 ULTIMATE Polaroids from the Piero Bisazza Collection Andy Warhol Follow Dennis Hopper 1977 Unique Polaroid Polacolor Type 108 print. Image: 9.4 x 7.3 cm (3 3/4 x 2 7/8 in.) Sheet: 10.6 x 8.5 cm (4 1/8 x 3 3/8 in.) Copyright credit blindstamp in the margin; initialled 'T.J.H.' by Timothy J. Hunt of the Andy Warhol Foundation, numbered 'FA05.01230' in another hand, all in pencil and Estate of Andy Warhol stamps on the verso. This work is unique.
Provenance The Andy Warhol Foundation for the Visual Arts, New York Marc Selwyn Fine Art, Los Angeles, 2006 The Piero Bisazza Collection, Italy Literature Andy Warhol Polaroids: 1971-1986 , New York: Pace/MacGill Gallery, 1992, p. 68, variant Andy Warhol: Photography , Hamburg: Kunsthalle; Pittsburgh: Andy Warhol Museum, 1999, p. 185, variant Andy Warhol: Polaroids 1958-1987 , Cologne: Taschen, 2017, p. 283, variant Catalogue Essay ‘My idea of a good picture is one that’s in focus and of a famous person.’ Andy Warhol Andy Warhol and the Polaroid During the 1970s up until his untimely death in 1987, Andy Warhol’s camera of choice for his silkscreen portraits was the Polaroid Big Shot. A close-up camera with a fixed focal lens and built-in flash, the Big Shot was perfect for taking portraits and made it easy for Warhol to quickly take multiple shots of his subject. To prepare for the shoot, women’s faces were often painted with white makeup to achieve a smooth appearance and men were posed to conceal any flaws. For most sittings Warhol was known to go through a few packs of film, and at the end of a shoot, he would select a small number of Polaroids to be sent off and re-photographed in 35mm, printed as 8 x 10 acetates and then re-printed in 40 x 40 to be finally transformed into the silkscreens. Most of these portraits were done on commission or trade. Both Roy Lichtenstein and Gilbert & George (lot 5) traded their paintings with Warhol for his silkscreen portraits. The Polaroid was the foundation for his 1970s and 80s silkscreen portraits and the Big Shot with its speed and disposability suited the purpose. These 11 Polaroids (lots 2-6) offer a unique record of the famous faces that populated the world of Andy Warhol, 20th century’s preeminent visual artist. Please refer to lots 152 – 172 for Polaroids from the Piero Bisazza Collection in the Photographs Day Sale. Read More Artist Bio Andy Warhol American • 1928 - 1987 Follow Andy Warhol was the leading exponent of the Pop Art movement in the U.S. in the 1960s. Following an early career as a commercial illustrator, Warhol achieved fame with his revolutionary series of silkscreened prints and paintings of familiar objects, such as Campbell's soup tins, and celebrities, such as Marilyn Monroe. Obsessed with popular culture, celebrity and advertising, Warhol created his slick, seemingly mass-produced images of everyday subject matter from his famed Factory studio in New York City. His use of mechanical methods of reproduction, notably the commercial technique of silk screening, wholly revolutionized art-making. Working as an artist, but also director and producer, Warhol produced a number of avant-garde films in addition to managing the experimental rock band The Velvet Underground and founding Interview magazine. A central figure in the New York art scene until his untimely death in 1987, Warhol was notably also a mentor to such artists as Keith Haring and Jean-Michel Basquiat . View More Works