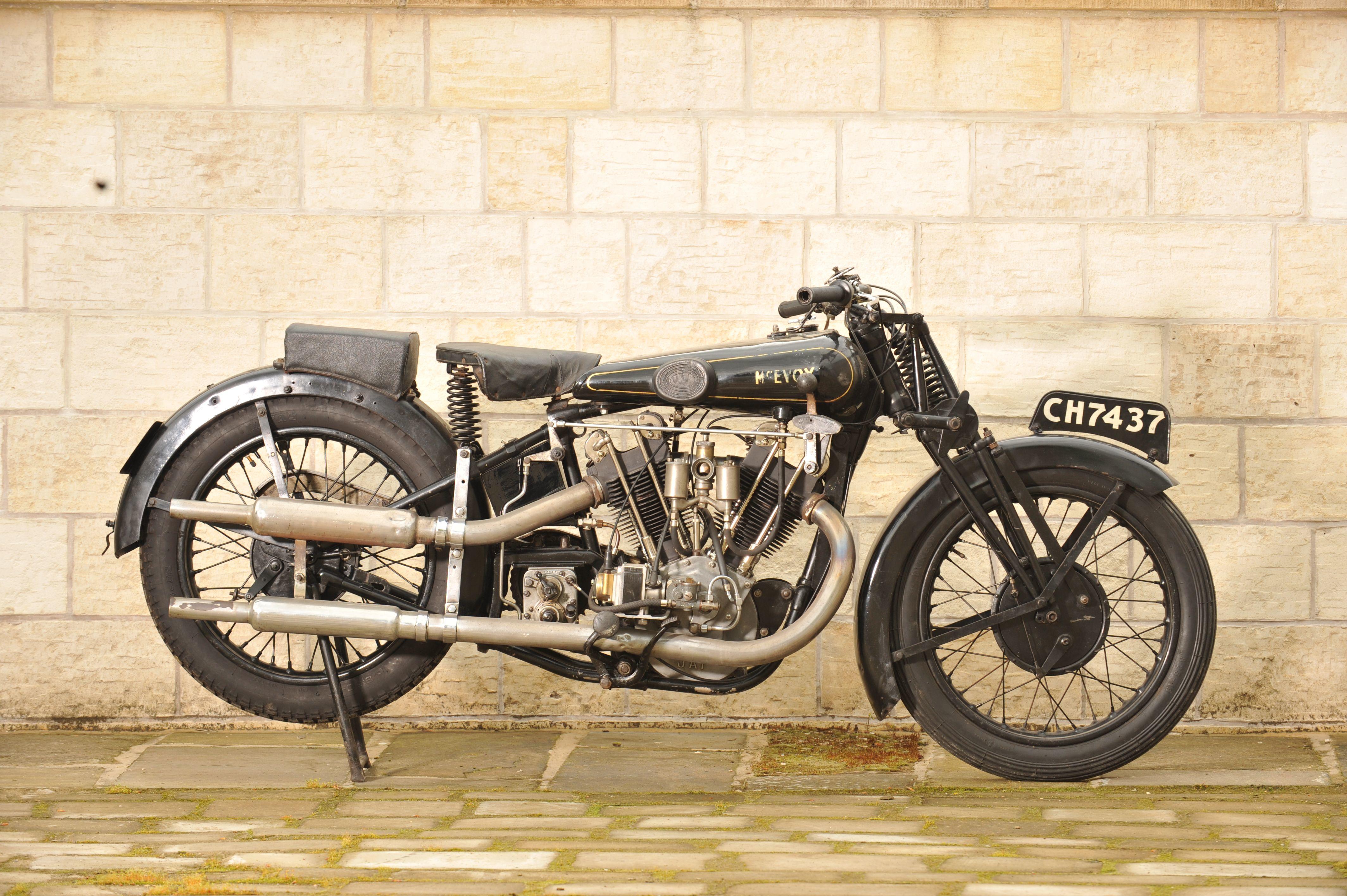 A regrettably short-lived marque, McEvoy built motorcycles from 1924 to 1929, its most famous creations being the fearsome Anzani and JAP-powered V-twin racers. In the hands of ace-rider George Patchett, McEvoys, in both solo and sidecar trim, stormed to notable successes on the steeply banked Brooklands Circuit at Weybridge. Old Etonian Michael A McEvoy ran his motorcycle operation from the tiny village of Duffield on the busy A6 road just North of Derby. His full time employment was at the nearby Rolls-Royce Derby factory where he honed his engineering skills. The first eponymously named motorcycle appeared in 1924 and McEvoy made its Motorcycle Show debut at the Olympia Exhibition the following year. On show there, and reviewed to much acclaim, were 350cc Blackburne and 500cc JAP-powered singles and a show-stealing 1,000cc Anzani V-twin. 1926 was a landmark year for young Michael McEvoy, his business now being well established and he himself having quit his employment at Rolls-Royce to devote his energies to his fledgling business. He relocated that year to larger premises in Leaper Street, Derby, and George Patchett moved from Brough Superior to join McEvoy as Competition Manager. That same year substantial financial backing came from Cecil Allerhead (‘Archie’) Birkin, brother of Sir Henry (‘Tim’) Birkin, one of the famous ‘Bentley Boys’ and backer also of Bentley Motors Ltd. With McEvoy’s Rolls-Royce background, Patchett’s experience at Broughs and Birkin’s financial clout, here was a potentially winning formula. That same year McEvoy’s range expanded to include a JAP-engined 8/45hp, overhead valve, V-twin, a state-of-the-art super-sports model guaranteed capable of 100mph. Contemporary McEvoy advertising boasted ‘The Fastest All-British Big Twin’ and that their machine ‘holds all high speed British records worth holding in its class’. The fearless Patchett broke nine World Records and won the Championship of Southport on the sands there in 1926 at 116 1/2mph. It had been McEvoy’s intention to build bespoke motorcycles for the wealthy and discerning, much in the manner of George Brough at nearby Nottingham, however financial necessity saw McEvoy adding models to cover almost every capacity class, even down to a 172cc Villiers-powered lightweight. Despite business pressures Michael McEvoy still found time for exciting development projects on the drawing board and an all-new four-cylinder prototype, along with a range of overhead-cam singles, was exhibited at Olympia in 1928. Sadly none of these models reached series production. The death of ‘Archie’ Birkin while practicing for the TT in 1928 lost McEvoy his major financial backer and this was a blow which was to prove not just crippling but fatal. The company was wound up and as part of that process Major John Clowes, one of McEvoy’s private backers, acquired this machine – CH 7437. Its significance and importance were perhaps not fully recognised when it was subsequently acquired by famous motorcycle road racer and grass track rider, Alf Briggs. Isle of Man TT winner, the late Eric Houseley, worked for Alf Briggs and coveted the ‘old warrior’ McEvoy JAP which he was later to acquire from the Briggs Collection, almost by accident when he tried unsuccessfully to buy a TT Raleigh from Briggs – good fortune indeed. During Houseley’s ownership this machine was the feature of a five page article in Old Bike magazine – Issue 20, Winter 1996/97. Inspection of his new acquisition revealed frame number 8128, suggesting that this machine was number 8 manufactured in the first month of 1928. The JAP engine’s KTOR/C prefix tells us that this is a 980cc, twin-cylinder, overhead valve, racing engine, the C confirming 1928 manufacture. This most desirable of all engines drives through a close ratio three-speed Sturmey-Archer gearbox. The finely engineered frame features all-important bracing strips either side of the front down tube, while steering is entrusted to a pair of heavyweight W 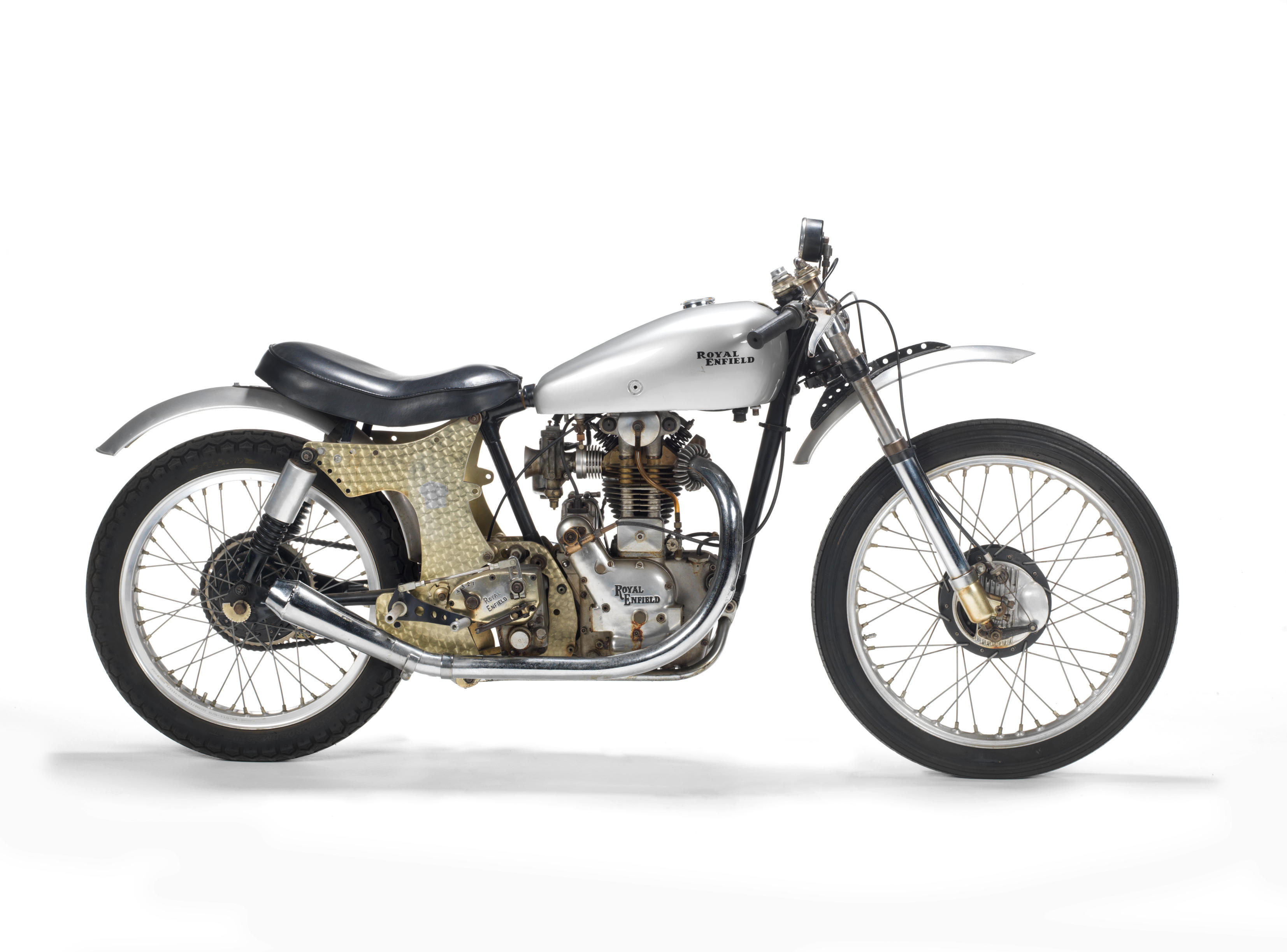 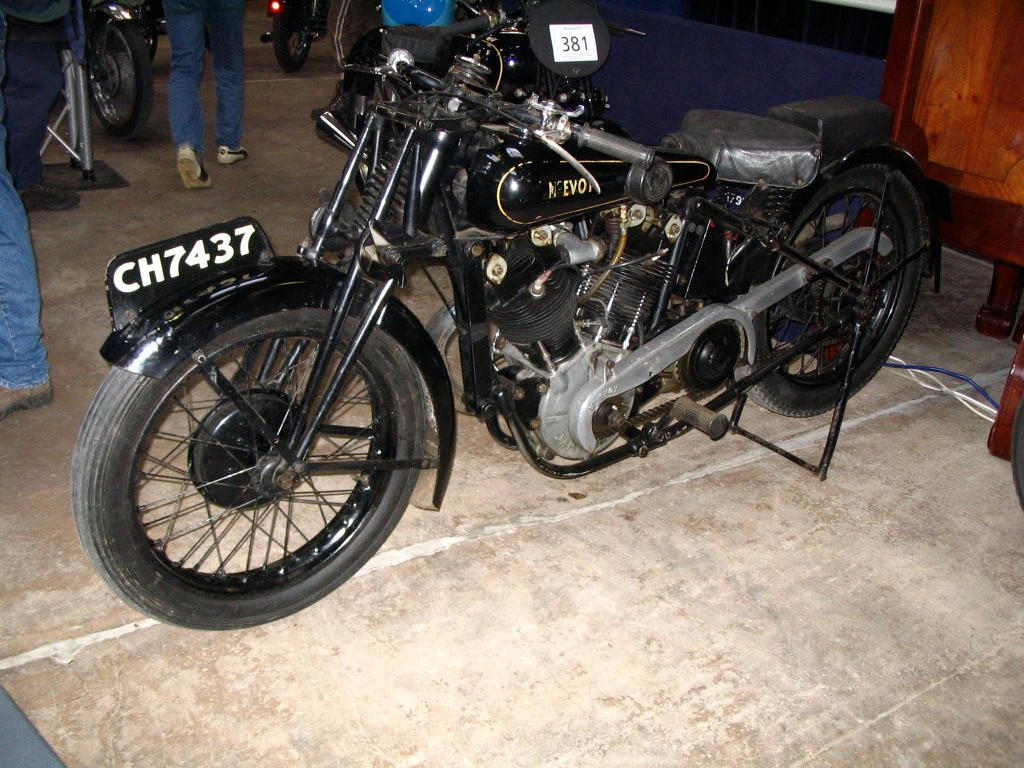 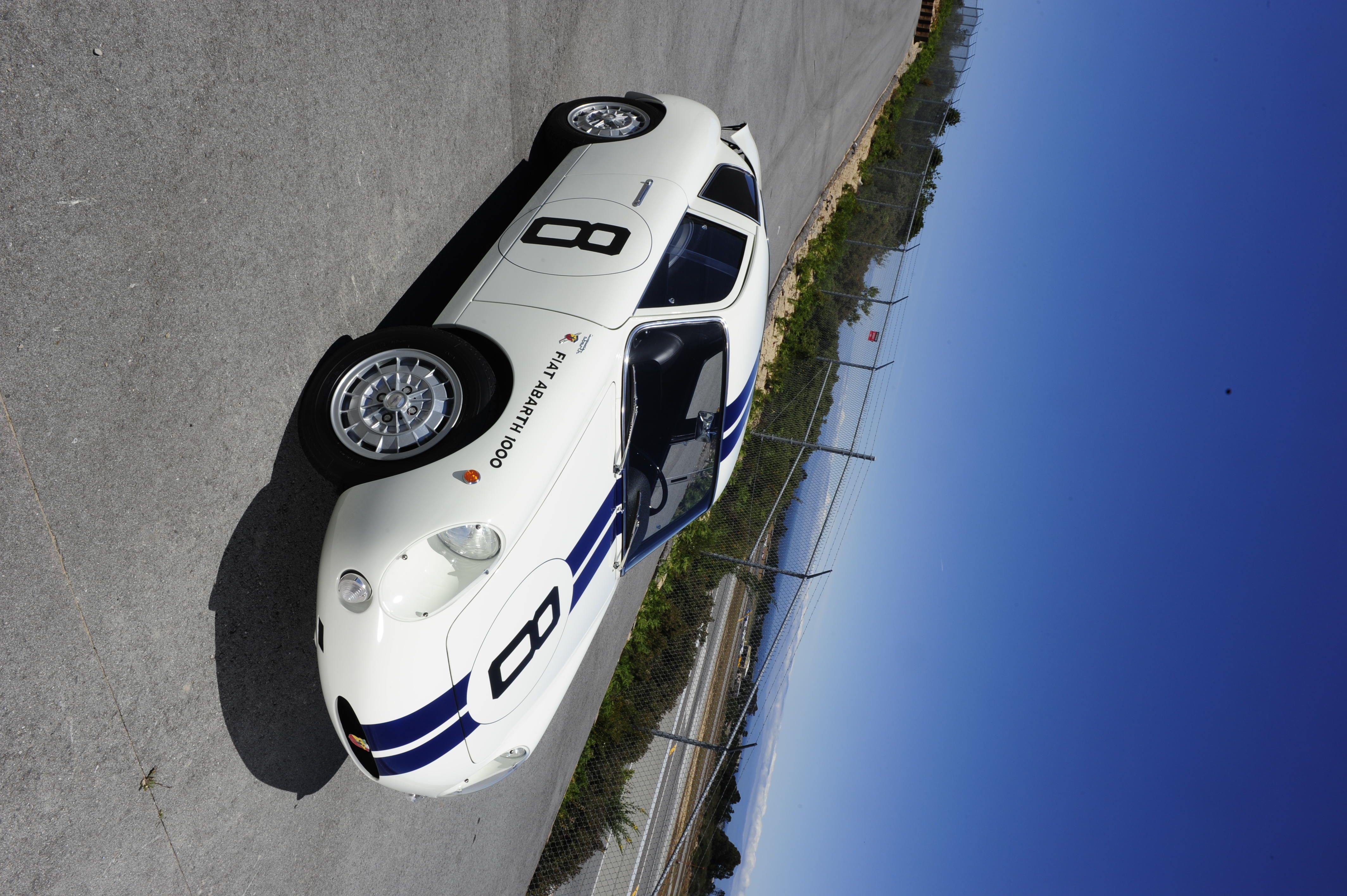 A dovetailed steel coffin smoother by No

A collection of twenty-two pieces of whi 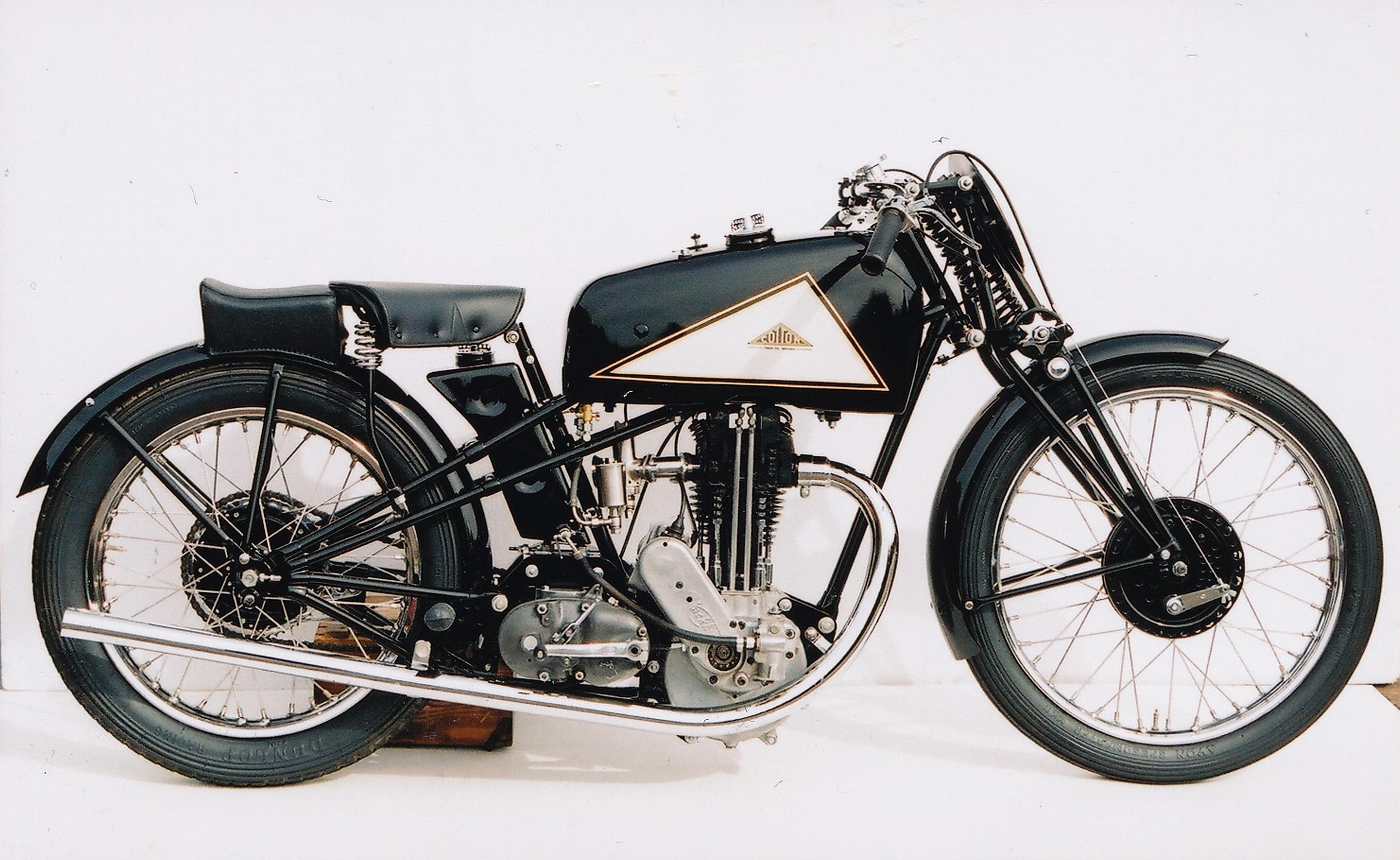