THE CEYLONESE SILVER-MOUNTED SHORTSWORD (KASTANE) PRESENTED TO THE RIGHT HONORABLE SIR WILLIAM HENRY GREGORY, K.C.M.G., 14TH GOVERNOR OF BRITISH CEYLON (1872-1877), FROM MRS ALWIS, CIRCA 1872-90 with curved single-edged blade formed with a long slender fuller on each face, the forte encased in engraved brass inlaid with silver scrolls and leaves (small losses), hilt of characteristic form almost entirely encased in chased silver plaques, comprising a pair of quillons, arms and knuckle-guard involving Simha and Makara heads and traditional scrollwork, the grip chased with further scrolls and the pommel formed as a Simha head with a single red stone eye (the other missing, small losses), in its wooden scabbard encased in gilt copper, decorated with traditional scrollwork at the top and bottom, fitted with a single ring for suspension, and with presentation inscription towards the top 64.7 cm; 25 ½ in blade The inscription reads: To The Right Honorable Sir W.H. Gregory, K.C.M.G., From Mrs Alwis. Sir William Henry Gregory (1816-1892) was the son of Robert Gregory of Coole Park, co. Galway, and Elizabeth O'Hara of Raheen. He was born on 13 July 1816 IN Dublin and educated at Harrow School from 1831 under Charles Thomas Longley, who considered him the cleverest boy he ever taught. Gregory was head of the school before leaving for Oxford. At Harrow he began a lifelong friendship with Anthony Trollope. Gregory matriculated at Christ Church on 6 June 1835, but was less successful there, running second for the Craven scholarship in two successive years. Deeply disappointed by this failure, and increasingly distracted by an interest in horse-racing, he left Oxford without a degree. In January 1842 he stood at a by-election as the Conservative candidate for Dublin, and was returned against the whig-Liberal Viscount Morpeth. The election cost £9000, of which the chief item was a 'gratification for 1500 freemen at £3 a head'. Gregory was soon regarded as being among the promising young men of his day in the House of Commons. He was popular with all parties and attracted the attention and regard of men as different as Peel, Disraeli, and O'Connell. He was the author of the 'Gregory clause', which disentitled the possessor of more than a quarter of an acre of land, and his family, to relief. He declared in parliament on 29 March 1847 that the smallholding class was 'no longer an object of pity'. He also procured the insertion of provisions for assisting emigration. Gregory inherited his father's Galway estates in spring 1847, and soon acquired a reputation as a humane and improving landlord. In 1850 he was appointed high sheriff of Galway, and became active in local affairs. Gregory's already considerably encumbered estates were pushed further into debt by his famine expenditure. His financial embarrassments were compounded by his passion for the turf, where he made heavy losses in the early 1850s and in 1857 he was obliged to sell more than half his estate. After this financial breakdown Gregory finally quitted the turf, but he retained his interest in racing matters to the end of his life. Gregory became best known in parliament for his promotion of state funding for the arts. In 1860 he chaired a House of Commons inquiry into the British Museum, and he subsequently had much to do with the arrangement and development of the South Kensington collections. He was an ardent supporter of the opening of public museums on Sundays and took a keen interest in popularizing the study of the arts. In 1867 he was appointed by Disraeli a trustee of the National Gallery, and he took a very strong interest in the enlargement of the national collection. Shortly before his death he presented the best of his private collection to the National Gallery. Early in 1871 Gregory was sworn of the Irish privy council, and later that year he was appointed, governor of Ceylon. In January 1872 he sailed for that colony, in which he remained for over five years. In this 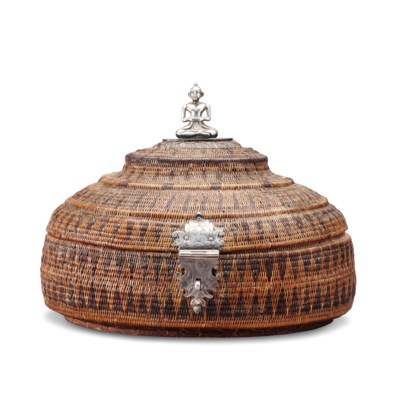 A Ceylonese piha-kaetta with ornately ca

A silver and ivory-mounted Ceylonese pih

A TURKISH KNIFE with single-edged blade