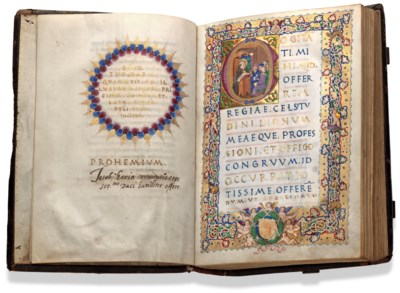 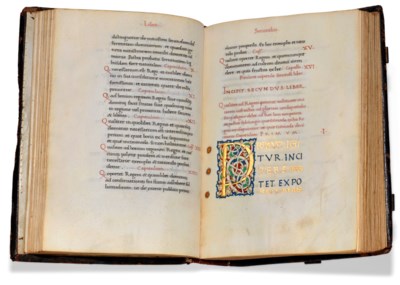 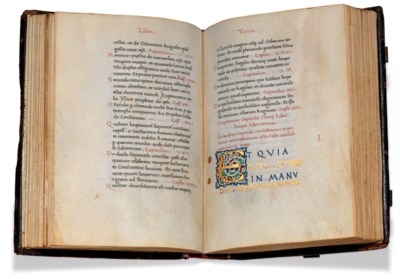 ST THOMAS AQUINAS (1225-1274), and PTOLOMY OF LUCCA (c.1236-c.1327), De regimine pricipum , in Latin, illuminated manuscript on vellum, Naples, 1470. A splendid Neapolitan humanist manuscript of the essential medieval treatise on kingship, signed and dated by Giovanni Marco Cinico and illuminated by Cola Rapicano. 252 x 171mm. i + 214 leaves, complete: i (of 2, ii a cancelled blank) + 1-8 8 , 9 6 , 10-27 8 , 24 lines, ruled space: 160 x 90mm, gathering signatures survive, illuminated initials throughout, one large historiated initial depicting St Thomas Aquinas instructing a monarch and his court within a full border incorporating putti and an erased coat of arms, 4 large white vine initials opening each book (some marginal staining to opening leaves, small horizontal cut to f.1, not affecting text, else in pristine condition). 17th-century blind-stamped leather over wooden boards, brass catches with remnants of red velvet (scuffed and rubbed, lacking clasps and a fragment of spine). Provenance : (1) Signed and dated by the scribe to the Aragon court and pupil to Pietro Sforza, Giovanni Marco Cinico, on f.212v: ‘Ioannes Marcus velox chrysopolitanus Petri Strozae florentini discipulus Neapoli 1470 tranquille transcripsit. Valeas qui legis.’ The coat of arms on f.3 is thoroughly erased, but seems to have once been quarterly, which might indicate a commission for the court of Aragon. (2) Giacomo Goria (1571-1648), Bishop of Vercelli, his inscription on f.2v: ‘Jacob[us] Goria servitutis ergo ser[enissi]mo Duci humiliter offert.’ The inscription likely predates Goria’s ordinance as Bishop in 1611 (a period that saw him fall out with the Dukes of Savoy) to the time when he was serving as tutor to Carlo Emanuele I’s children in Turin. Gift to: (3) Carlo Emanuele I (1562-1630), Duke of Savoy, nicknamed ‘Testa di Fuoco’. By descent. Content : De regimine principum (or ‘De Rege et Regno ad illustrem Cypri principem’): chapter list for Book I ff.1-2; preface ff.2v-3v; Book I ff.3v-44v; chapter list for Book II ff.44v-46; Book II ff.46-82v; chapter list for Book III ff.82v-84; Book III ff.84-142v; chapter list for Book IV ff.142v-145; Book IV ff.145-212v. The text of the De regimine principum falls squarely into the tradition of ‘Mirror of princes’ literature, that genre of medieval advice literature that outlines basic principles of conduct for rulers based on Christian virtues and natural and feudal law. This tradition would lay the foundations for later Renaissance theories of politics and political theory and thus for modern political science. While historically attributed to St Thomas Aquinas, it is now accepted that the text as laid out in the present manuscript was also the work of Aquinas’ pupil and disciple Ptolomy of Lucca (with Book I and part of Book 2 attributable to Aquinas, and the remaining books to Ptolomy). Illumination: The illumination is attributable to Cola Rapicano, the official illuminator to the Aragon court in Naples from 1451 to 1488. His earliest securely identified and documented work is the copy of Andrea Contario’s Obiurgatio in Platonis calumniatorum of 1471 (Paris, BnF, Ms lat.12947), also written by Giovanni Marco Cinico, with whom he collaborated on more than one occasion. Each book of the present manuscript is preceded by intricate white-vine initials of Florentine inspiration but Neapolitan execution so characteristic of Cola’s style, and the flying little putti with splayed legs in the borders of the opening leaf of the preface are lively and recurrent protagonists in several other manuscripts attributed to the artist (in addition to the BnF manuscript, see, for example a Breviary in Valencia, Biblioteca Universitaria Ms. 890-726 and a Quintus Curtius Rufus, Rerum gestarum magni Alexandri in Madrid, Biblioteca Nacional, ms.vitr. 22.9). From the mid-15th century, Cola led a thriving workshop that produced numerous manuscripts for the Aragonese court, and his engaging and modernising blend of 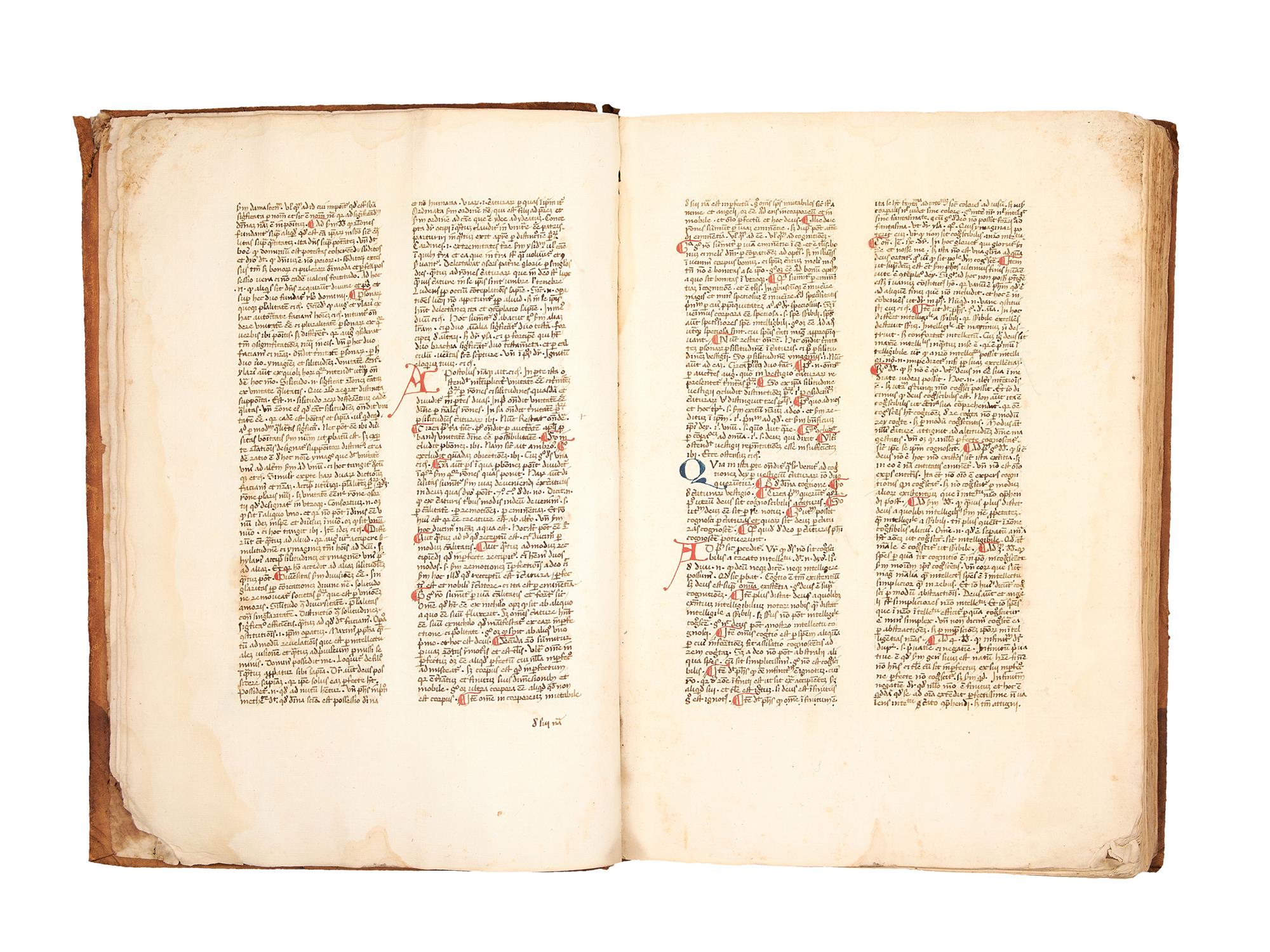