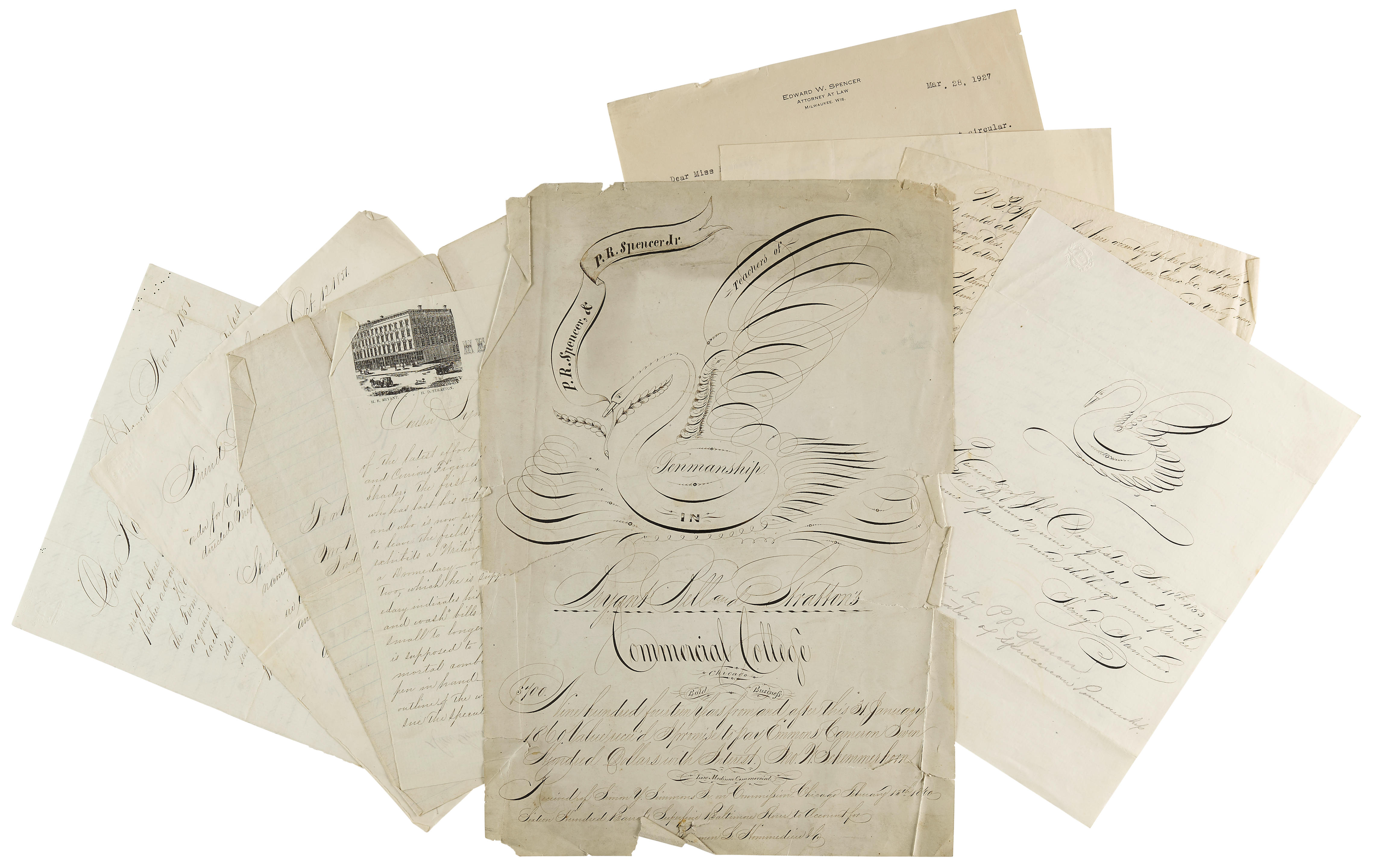 Archive of correspondence, manuscript exemplars, advertising materials, roughly 60 pp in total, printed and manuscript, 1852-1916, housed between old boards with manuscript label, "Writing of Platt R. Spencer and His Sons – Selected by E.W. Spencer," including: 1. 7 Autograph Letters Signed (mostly "P.R. Spencer"), mostly to son Robert Spencer, and to Friend H.W. Lusk, 12 pp in total, 1852-1858, on subjects including the business, advice to his family, the financial situation, etc, all in his exemplary hand, with 6 additional autograph exemplars (two with additional ornamentation) being proofs for lithographed ads, or invoices. 2. 10 Autograph Letters Signed by the family, including sons Robert, P.R., Jr., and Henry, as well as sister Sara, and cousin Lyman, about 30 pp in total, 1854-1864, discussing the business and the family. 3. Additional advertising materials, some lithographed, for the Spencerian Business College and for Bryant & Stratton colleges, which overlapped with the Spencers, testimonials, and two Spencerian workbooks. WITH: Corporate records and contracts relating to the Spencerian Business School, beginning with the 1874 papers of incorporation, and including the 1923 contract for the sale of the school to Elizabeth W. Bennett, with a note documenting the negotiation from Edward Spencer, testimonials, and contracts through 1970, about 500 pp, post-bound in black cloth. Provenance: Spencer Family; Elizabeth W. Bennett; thence by descent. Platt Rogers Spencer created Spencerian penmanship, the most popular American script style that was the standard for business correspondence between the 1850s and the invention of the typewriter. It's influence can still be seen in the logos for Coca-Cola and the Ford Motor Company, which use only Spencerian lettering. Spencer's development and teachings of handwriting were part and parcel of his leadership in the development of the business school movement, through the Spencerian Business College begun in the 1850s, spreading to Pittsburgh, Cleveland, and Geneva and Milwaukee, Wisconsin, thriving in the late 19th through mid-20th century, and finally being absorbed by Concordia College in 1972. The Spencerian Business College and similar institutions represented a prominent reflection of the 19th- and 20th-century ideal of the American Dream, whereby hard work, education, and self-improvement would bring success and happiness to anyone willing to apply themselves. An extensive archive of a quintessentially American institution, and a beautiful collection of calligraphic examples in the prominent American style.