SCENES FROM THE LIFE OF CHRIST, ILLUMINATED ARMENIAN MANUSCRIPT ON VELLUM

SCENES FROM THE LIFE OF CHRIST, ILLUMINATED ARMENIAN MANUSCRIPT ON VELLUM [Constantinople, ca. 1650] 165 x 125 mm., 16 leaves and contemporary folded outer vellum leaf, stitched as one gathering, 16 FULL-PAGE MINIATURES, without text, all blank on verso. (Some flaking of most miniatures, also spotting and fraying at outer margins.) A PARTICULARLY FINE AND RICHLY-DECORATED ARMENIAN MANUSCRIPT, which was probably meant to be part of a Gospel Book, to be bound before the Gospels. In view of the contemporary outer wrapper, this manuscript may never have been bound in, or was separated at an early date. There is lavish use of gold throughout and the miniatures are in the style of a similar cycle in a Gospel Book, executed in the province of Siunik and dated A.D. 1659 (this was offered in our sale of Doheny manuscripts 2 Dec. 1987, lot 182). THE SUBJECTS OF THE MINIATURES ARE: folio 16. Annunciation to the Virgin. The angel at the left offering flowers in front of an Armenian church folio 2a. Adoration of the Magi. The Virgin and Child enthroned, Joseph standing behind her. Mountains and a distant city at back folio 3b. Presentation in the Temple. The Virgin, Joseph and Anna are carrying doves, Simon holding out the Child. The Temple behind them (slightly rubbed) folio 4a. Baptism of Christ. John the Baptist standing on the slope of a rocky mountain, Christ is standing in the river, three angels are watching, the Holy Dove descending folio 5b. Transfiguration. Christ within a mandorla standing on top of a high mountain, Moses and Elias at his side, each on a separate peak. In the foreground three apostles folio 6a. Raising of Lazarus. Christ advancing, followed by apostles, Mary and Martha kneeling. At the back between mountains the heads of the Jews watching and view of a city (somewhat rubbed) folio 7b. Entry into Jerusalem. Christ on an ass, followed by disciples. In front of him a woman holding a child, two children spreading their coats under the legs of the ass. The city behind folio 8a. The Last Supper, at a round table with gold utensils folio 9b. Christ kneeling, washing the feet of the Disciples, in front of a Church folio 10a.The Betrayal. Judas embracing Christ, surrounded by soldiers. In front Peter cutting off Malchus' ear folio 11b.Christ carrying the Cross, being led and followed by soldiers folio 12a.The Crucifixion. Mary and John at Christ's side folio 13b.Resurrection. Christ holding a banner rising from the tomb, an angel sitting on the tomb, two sleeping soldiers below folio 14a.Ascension. Christ in Majesty within a mandorla supported by two angels. Below the Virgin orante, with the Apostles folio 15b.Pentecost. The Virgin and Apostles seated on a semi-circular bench. In the centre a white-bearded priest holding a cloth phelonion with both hands folio 16a.The Last Judgment. Christ enthroned between the Virgin, John the Baptist and Apostles. Below an empty throne with a cross placed behind, inscribed in Armenian "Lord God, Jesus Christ", Adam and Eve nimbed, kneeling either side. A red stream of souls flows from Christ's throne into the mouth of hell below. In the centre a hand holding the scales and an angel weighing the souls in circular clouds. Below Paradise a group of nimbed men walking towards Christ carrying the Cross and a walled city containing Abraham holding a cloth with both hands. Four rivers flow out of Paradise.

SCENES FROM THE LIFE OF ST SUSANNA, larg

NICHOLAS NICKLEBY] Scenes from the Life 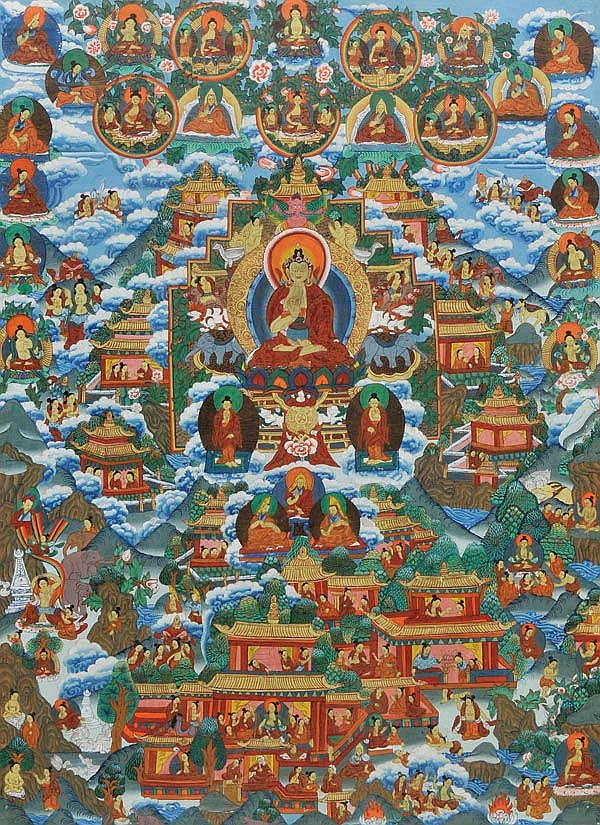 Tibetan School. Scenes from the Life of

A gray schist frieze with scenes from th

THE ANASTASIS SURROUNDED BY SCENES FROM

SCENES FROM THE LIFE OF KRISHNA