Wood, kaolin height 12in (30.5cm) Provenance: Vittorio and Mariana Mangio, Milan, Italy Merton D. Simpson Gallery, New York (Inventory #8316 verso, upper right) Acquired from the above by the present owner ca. 1980s Vittorio Mangio, was very active as a collector/consultant from the 1960s, onward, when he lived in Monrovia, Liberia. He helped form the now-famous collection of Carlo Monzino. He was also the consultant for the Italian collection: L. Lanfranchi. Co-author: Societa Segrete Africane e Loro Funzioni Sociali e Politiche, Le Arti, Marzo 1976 (with Gino Cerastico) Merton D. Simpson was the premier dealer in African Art in the United States and one of the foremost dealers worldwide. He opened his first gallery for “Primitive Art” in 1954 in New York. Many important American and European museums acquired African Art from Simpson, including: Barbier-Mueller Museum; British Museum of Art; Dallas Museum of Art, Detroit Art Institute; High Museum of Art; Guggenheim Museum; Metropolitan Museum of Art; Museum for African Art; National Museum of African Art/Smithsonian; Peabody Museum at Harvard University; Scott Field Museum, Chicago; Yale University Art Gallery; as well as the foremost collectors, private and corporate, worldwide. ‘“Over the course of the ’60s and ’70s Simpson became the most important dealer in the U.S. in this field,” Sotheby’s Head of Department of African & Oceanic Art said. “Worldwide, you could say he was one of the two or three leading dealers, and certainly a powerhouse in the U.S., and this was especially remarkable for an African-American, who began doing this in the time of segregation.” “He was a real pioneer, involved in African art at a high level at a time when there weren’t even many African-Americans who were collecting African art,” said Lowery Stokes Sims, curator of the Museum of Arts and Design in Manhattan and former President of The Studio Museum in Harlem who worked at the Metropolitan Museum of Art from the ’70s to the ’90s. “When I worked at the Met I would go to the gallery and see some of the most incredible African art I’d ever seen in my life..."', The New York Times Obituary, March 14, 2013. A superb and rare Fang dance mask of lightweight wood. Having a peaked, visor-like coiffure with side braids, all in black. Blackened nose and B-shaped, pierced mouth, with exposed teeth. Thin, pierced and slightly crescent-shaped eyes with double-median incised lines extending from the long, narrow nose upward to the top of the forehead. Incised double arched eyebrows extending backward onto the temples. The undulating facial plane covered with various layers of kaolin. Holes along the upper perimeter for attachment and heavily encrusted, worn surface overall. Cf: Fagg, William, Masques d’Afrique, 1980, Editions Fernand Nathan, pg. 113, illustrated. (W. Fagg was the Keeper of Ethnography, British Museum, 1946-1974, etc.) Picasso was drawn to Fang sculpture, especially masks as shown during the period he created Les Demoiselles d'Avignon circa 1907. '"Two characteristics of Picasso's 1907 painting that persisted into 1908 - blocky symmetrical torsos and concave faces - have a decided kinship with tribal art. Physiognomies that combine a wide convex forehead and a long, tapering, concave lower face, such as we see in Woman's Head of early 1908, descend from the upper right-hand head in the Demoiselles, and also unquestionably answer to Fang sculpture... Fang masks were owned by Picasso, Braque, Derain, and other artists [...]. Fang-inspired concave facial types continue in Picasso's work well into 1908, as shown in the Sudy of Friendship, indeed, right into Three Women, whose repainted version of the following winter would mark the end of Picasso's "Africanism."' William Rubin, Primitivism in 20th Century Art: Affinity of the Tribal and the Modern, New York, Museum of Modern Art, 1984, p. 290. “The Fang occupy much of the northern half of the Gabon and some southern parts of the Cameroon, fro 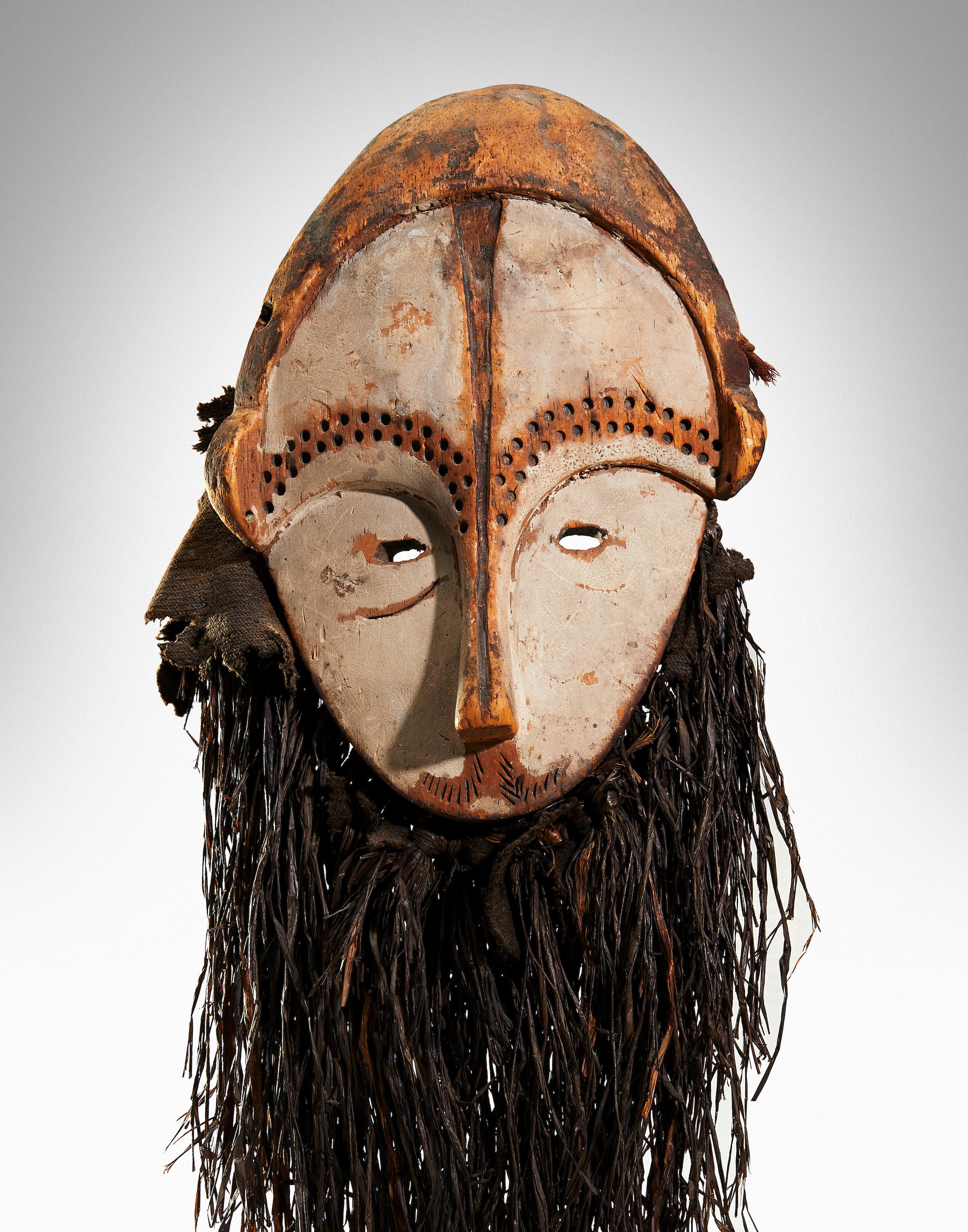