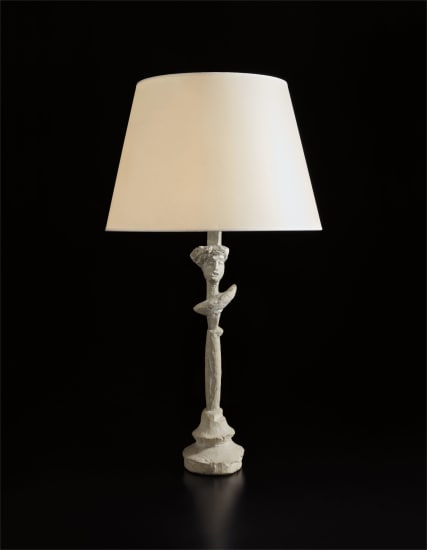 Property from a Private Collection Alberto Giacometti Rare "Ecossaise" table lamp circa 1935 Painted plaster, paper shade. Base only: 20 1/2 in. (52.1 cm) high, including shade: 32 in. (81.3 cm) high, 18 in. (45.7 cm) diameter Together with a certificate of authenticity from the Comité Giacometti.
Provenance Maître Pierre-Marie Rogeon, Expert Jean-Pierre Camard, Drouot, Paris, "Art nouveau: meubles et objets d'art par J. M. Frank & Chanaux," November 4, 1980, lot 66 Pierre et Geneviève Hebey, Paris Camard & Associés, Paris, "Objets d'art, sculptures, tableaux modernes: provenant de la collection de Pierre et Geneviève Hebey," March 27, 2012, lot 24 Galerie L’Arc en Seine, Paris, 2012 Acquired from the above by the present owner, 2012 Literature Waldemar George, "Jean-Michel Frank," Art et Décoration, no. 3, 1936, p. 98 Michel Butor, Diego Giacometti Paris, 1985, p. 130 Diego Giacometti Möbel und Objekte aus Bronze, exh. cat., Museum Bellrive, 1988, Zurich, p. 31, no. 9 Léopold Diego Sanchez, Jean-Michel-Frank, Adolphe Chanaux, Paris, 1997, p. 239 for an example in gold Pierre-Emmanuel Martin-Vivier, Jean-Michel-Frank: The Strange and Subtle Luxury of the Parisian Haute-Monde in the Art Deco Period, New York, 2006, p. 323 Catalogue Essay The present lot is registered by the Fondation Alberto and Annette Giacometti in the online Alberto Giacometti Database (AGD) under the number AGD 1984. The present lot is one of a small handful of “L’Ecossaise” plaster table lamps executed in the 1930s by Alberto Giacometti including a dark tinted example, formerly in the collection of Elsa Schiaparelli which sold November 24, 2015 at Sotheby’s, Paris. As of the publication of this catalogue, the present lot is the only example to appear in the Alberto Giacometti Database. Traditionally, sculpture is realized by means of two principal techniques: carving from a hard material such as stone or wood and modelling in clay or wax. From the 1930s Alberto Giacometti known primarily as a modelling sculptor, produced a variety of different sculptural objects, which still today are regarded as noteworthy contributions to the development of Surrealist sculpture. Exploring themes derived from Freudian psychoanalysis, like sexuality, obsession and trauma, two major areas of interests can be distinguished within the iconic œuvre of the Swiss-born artist: the investigation into the nature of the human figure—with a recurring motif embodied by the head; the manufacture of utilitarian art objects—to which this present lot significantly belongs. At the height of the Art Deco style, the early 1930s were a period in which there was a natural overlap between fine and decorative art. The financial crisis that struck Paris as elsewhere, had a substantial impact on artistic production and sculpture became a more difficult venture. Giacometti, with the assistance of his brother Diego, began to design a series of vases, wall lamps, table lamps, firedogs, mural bas-reliefs and other interior objects, the majority of which were sold by the avant-garde interior decorator Jean-Michel-Frank. It is believed that Alberto Giacometti and Jean-Michel-Frank were first introduced in 1928 by their mutual friend Man Ray during one of the regular Surrealist gatherings at the Salon Des Indépendants. Undeniably Frank was one of the first, along with Leiris, Bataille, and Rivière, as well as Jeanne Bucher, to discover the sculptor’s talents in the decorative arts and to recognize the potential for commercial and artistic impact. The two men, who became very close friends and frequently met to discuss and exchange opinions with the likes of Paul Rodocanachi, Salvador Dalí Christian Bérard Emilio Terry Louis Argon and Marie-Laure de Noailles had a reciprocal influence upon each other’s work and shared amongst themselves the goal of removing the superfluous in order to concentrate on the essential. Between 1932 and 1940 Giacometti was commissioned to produce seventy designs for objects, including seventeen lamps, eleven floor lamps, thirteen vases, and ten wall lights, as well as small accessories such as table runners, bowls, consoles, andirons and chimneys that the Paris decorator integrated into his now iconic interior compositions. Giacometti also created hardware, such 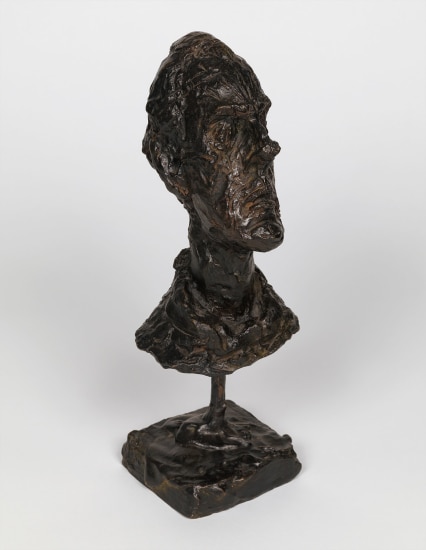 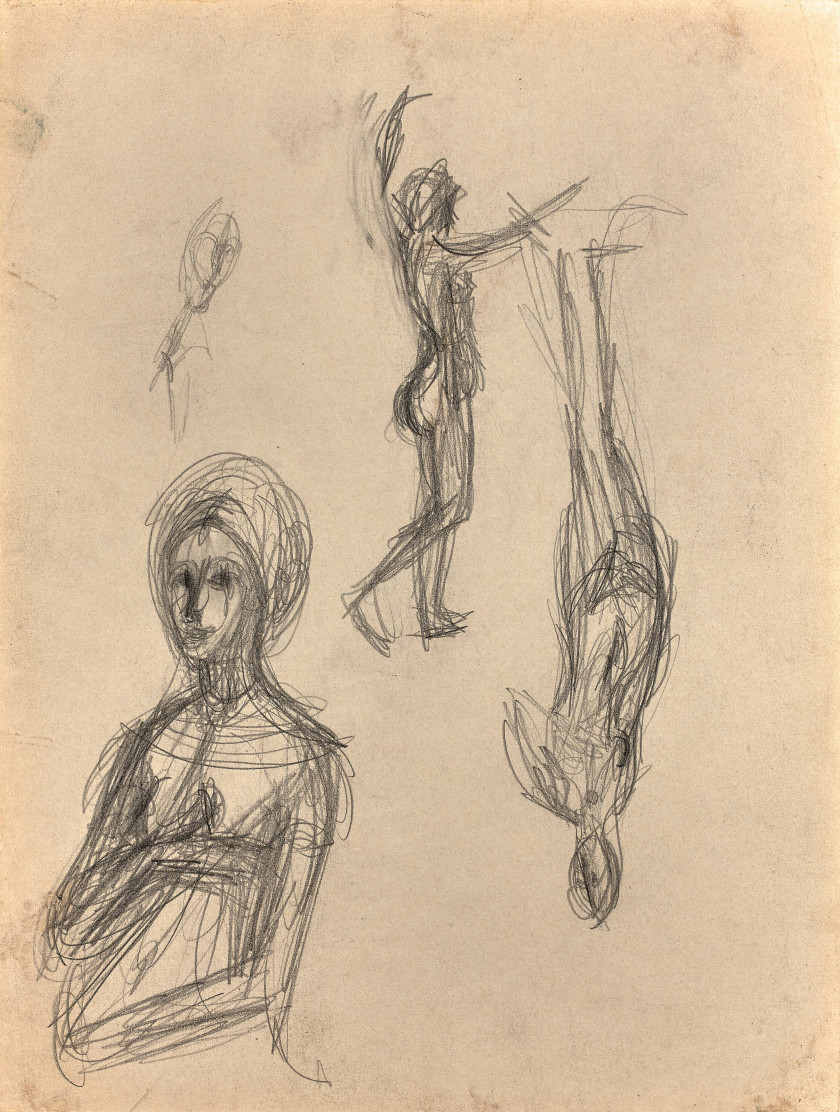 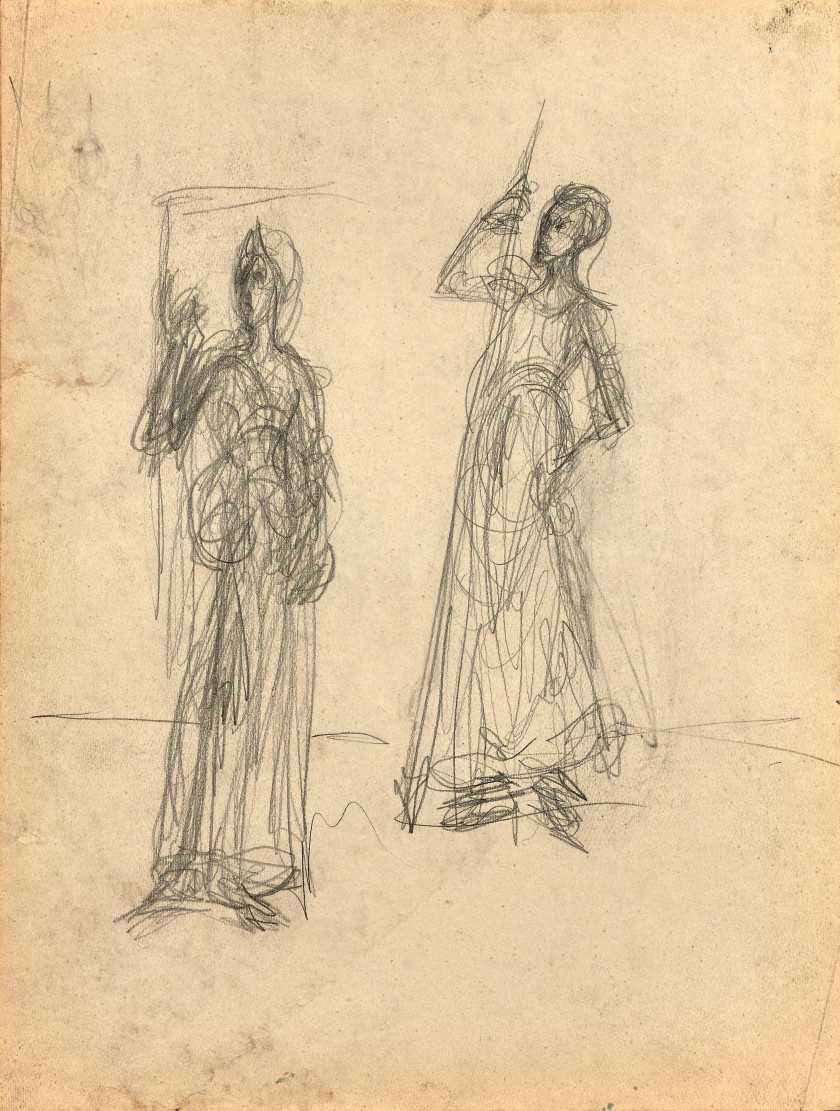 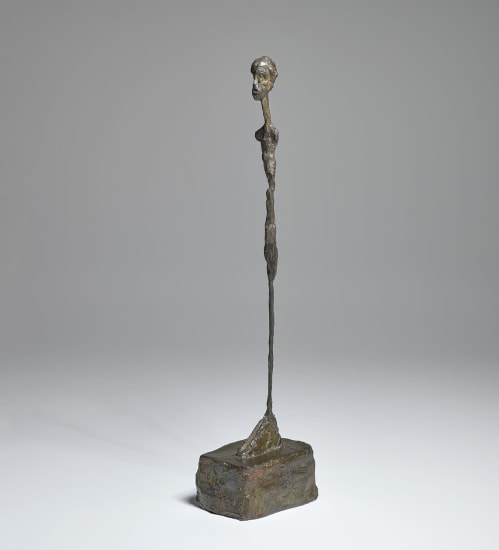 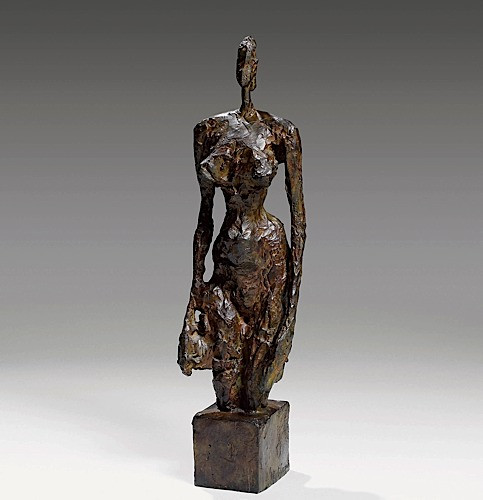 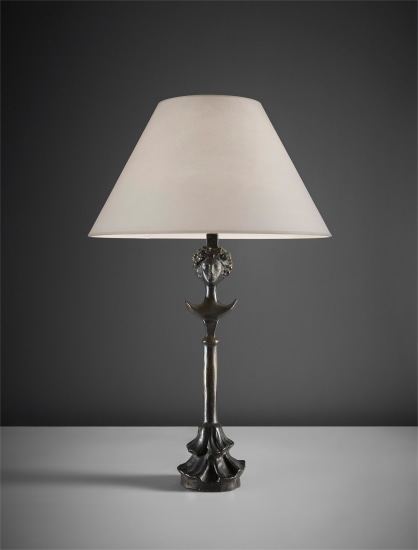