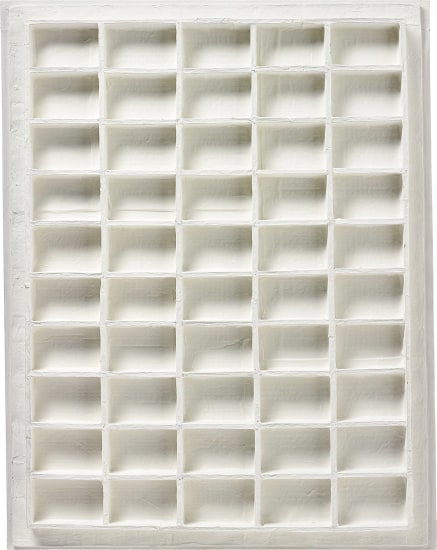 Property from a Distinguished Private Collection Jan Schoonhoven Follow R62-14 signed and titled 'J. J. Schoonhoven "R62-14"' on the reverse painted papier-mâché relief on board 85.5 x 67 cm (33 5/8 x 26 3/8 in.) Executed in 1962, Antoon Melissen has confirmed the authenticity of this work.
Provenance Henk Peeters, The Netherlands (acquired in 1962) Galleria Cadario, Milan (acquired from the above in 1963) Private Collection, Switzerland Private Collection, The Netherlands (acquired from the above mid 1990s) Acquired from the above by the present owner Literature Antoon Melissen, Jan Schoonhoven, Rotterdam, 2015, pp. 72-73 (illustrated, p. 73 and cover) Catalogue Essay Contrastingly, the cool, stringently methodical, measured works of Jan Schoonhoven are simultaneously familiar, gentle and intimate. R62-14 is imbued with the warm craftsmanship of a man who had developed his art at the centre of his home on the kitchen table after a day in The Hague. Juxtaposed to the regular geometric articulation is the duality of soft, malleable materials, constructed by hand from paper, paint and cardboard: a key quality that sets Schoonhoven apart from the machined perfection of his contemporaries. The playful movement of light and shade over the ordered construction further serves to enliven the surface emphasised precisely by the absence of colour. Maintaining the calculated architectural quality of his earlier drawings influenced by the buildings in his home town of Delft, Schoonhoven began experimenting with his architectural structures in 1956, having constructed castles, zoos and a mountain range from papier-mâché, cardboard, glue and paint for his son. Despite his sheltered home setting, Schoonhoven was close to the leading figures of the post-war avant-garde. Harnessing his minimalistic output, Schoonhoven played a founding role in the collector Hans Sonnenberg’s group Zero in 1958 where his works appeared alongside fellow artists such as Lucio Fontana and Jasper Johns - artists who each uniquely pursued a condensation of the autobiographical idiom and anecdotal references, to a formal essentialism. These ideas are clearly articulated by Fontana’s early monochromes with razor-sharp cuts. More obviously evident in R62-14 through its strictly formulaic geometry, was Schoonhoven’s involvement in the Dutch group Nul, a collective of Dutch artists established between 1961 and 1966, who collaborated closely with the key members of the German Zero network. Nul were unified by the culminated desire to distance themselves from emotionally charged art by seeking different means and modes of expression. The exhibition Monochrome Malerei , held in Leverkusen in 1960 played a guiding role for Schoonhoven and artists of the Zero avant-garde, emphatically emphasising the varied approaches to the grid and the monochrome. ‘Zero does not aim to depict a geometric construction’ wrote Schoonhoven in 1964, ‘but uses geometry to explain a standpoint…The geometric aspect of Zero is therefore attuned to extreme simplicity, an organisation of shapes, of reality derived from the real… The goal is to establish reality as art in an impersonal manner’ (Jan Schoonhoven quoted in Jan Schoonhoven , exh. cat., David Zwirner, New York, 2015, p. 33). The grid format and application of the uniformed colour white allowed Schoonhoven to democratise his works, its systematic form impeding expression and prejudice. The method of the relief and its subsequent meaning lies in its isolation of concentrated and thematised forms. Schoonhoven commented on the single theme on which he based his works as ‘a gradual vertical division of parallel horizontal cells’ (Antoon Melissen, Jan Schoonhoven , Rotterdam, 2015, pp. 128, 132-133). The uniformity of the divided rectangles is made humane by the handmade technique. ‘Despite their minimal form and colour, there’s no boring monotony. Firstly, there is a sense of it being a manuscript, in which the handmade quality is almost tangible’ (Rudi Fuchs quoted in Jan Schoonhoven, exh. cat., David Zwirner, New York, 2015, p. 8). Indeed, upon being bestowed the honour of the 1967 Bienal de São Paulo, his white relief works were considered ‘by far the most sensitive three-dimensional works in the biennale’ (Antoon Melissen, Jan 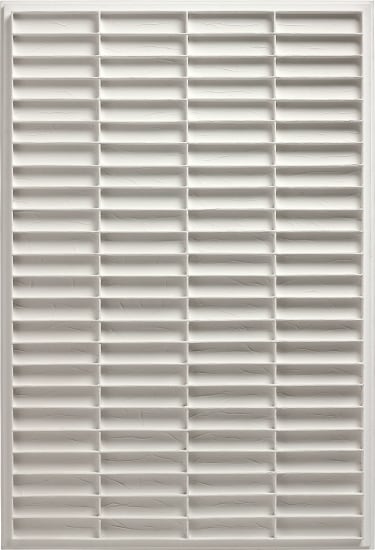 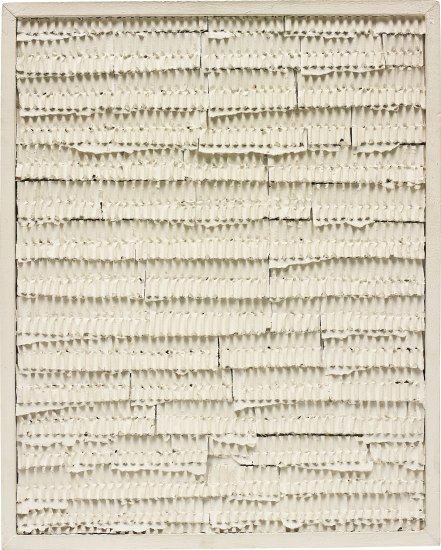 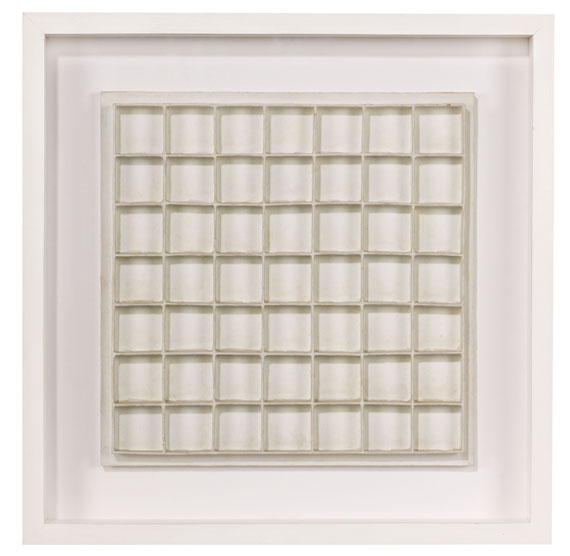 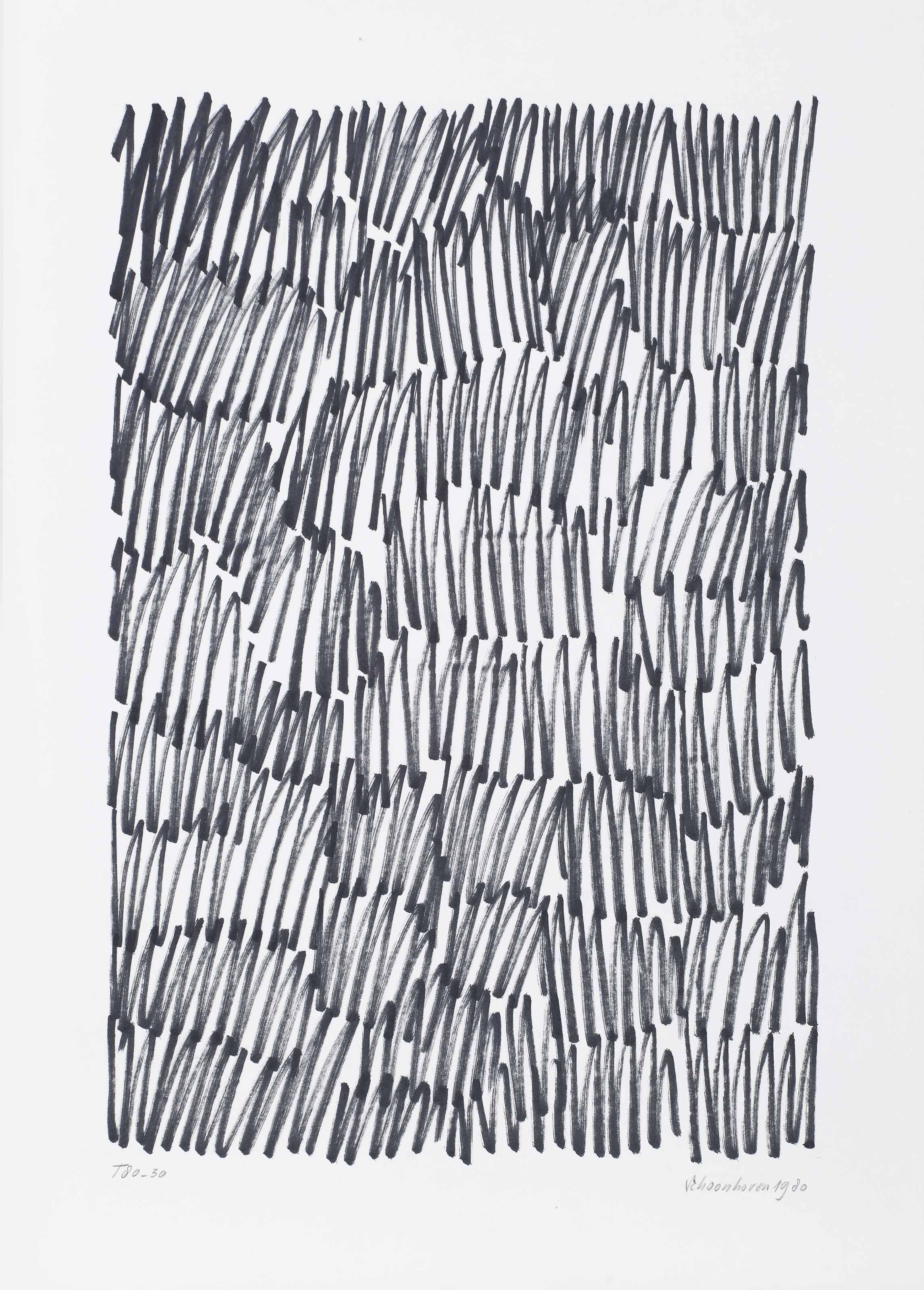 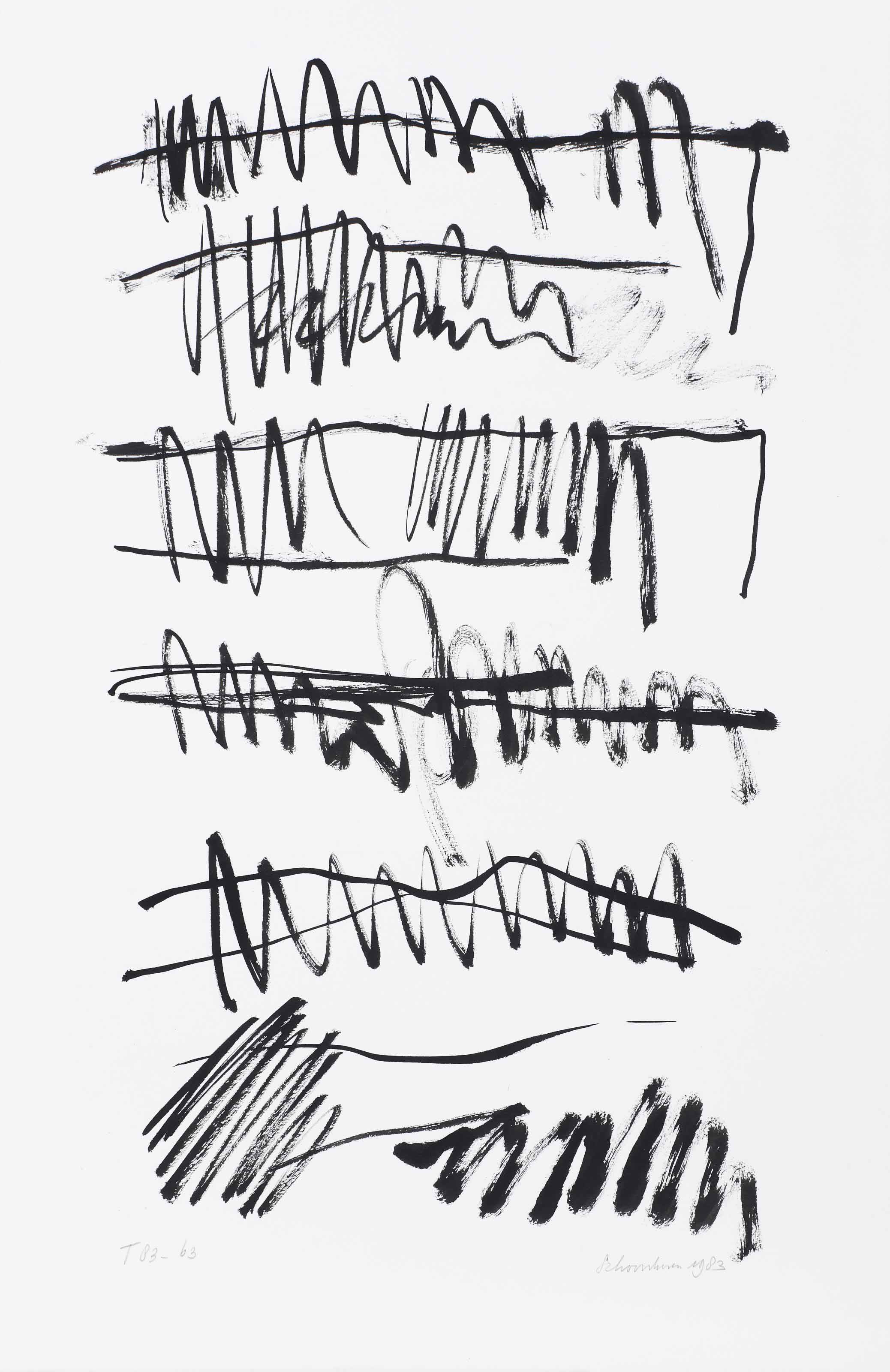