PORTOLAN CHART - [Portolan chart of the Mediterranean]. Northern Italy, possibly Jouanne or Francisco Oliva, late 16th- early 17th century.
PORTOLAN CHART - [Portolan chart of the Mediterranean]. Northern Italy, possibly Jouanne or Francisco Oliva, late 16th- early 17th century. A single vellum sheet, 375 x 620 mm, verso blank. The chart extending from Gibraltar to the Holy Land, from Northern Italy to North Africa, coastlines in sepia, islands in green and red, rivers in green, over 1,000 coastal place-names in red and sepia in semi-italic lettering, 13 detailed town vignettes, surmounted by flags, mountain ranges, 10 large and small compass roses each with fleur-de-lys north points, 2 half compass roses, the whole chart divided by red and green rhumblines extending from the compass roses, sepia-ruled borders. Two faint horizontal creases indicate that the chart was folded, evidence of early blue paper backing remains on the verso, and tiny pinholes along the margins are an indication that the chart was pined to a board. (A few worm holes affecting lower border, two tiny rust holes, minor soiling to left margin.) Provenance : Percioliny (early 20th-century pencil inscription on back, and pencil signatures in lower corners). A MAGNIFICENT AND ACCOMPLISHED PORTOLAN CHART OF THE MEDITERRANEAN. The detailed birds-eye view of the city of Genoa suggests that the chart was drawn for a Genoan client. The simplicity of the decoration could be an indication that the chart was produced for a ship's captain or for the office of a mercantile clientele. This particular chart adopts some of the features of the charts drawn by the Oliva family. The Olivas, a family of Catalan chartmakers, produced their first chart in Majorca before 1550. Charts signed by at least 16 members of the Oliva family are recorded, with dates between 1538 and 1673. The charts were produced in a number of ports, including Majorca, Messina, Livorno, Florence, Venice, Malta, Palermo and Marseilles. The chart incorporates townscapes surmounted by flags (including Genoa, Montpellier, Barcelona and Valencia) and elaborate 32 and 16-point compass roses. This decorative style, which began in the 15th century, flourished in the mid- to late-16th-century particularly in Southern Spain, Majorca, Marseilles and Genoa. This example is particularly fine in its composition and draws inspiration from early charts. It is a good example of a working portolan chart, attractive but not elaborately illuminated. Two charts with a number of similarities have been identified. One is in the collection of the Hispanic Society of America (Atlas K21) which has been attributed to Francisco Oliva, the other is at Columbia University and is signed by Jouanne Oliva (Plimpton ms94). Christie's is grateful to Richard Pflederer, who studied the chart and shared his notes with us.

CONTE FREDUCCI, [ Portolan chart of the 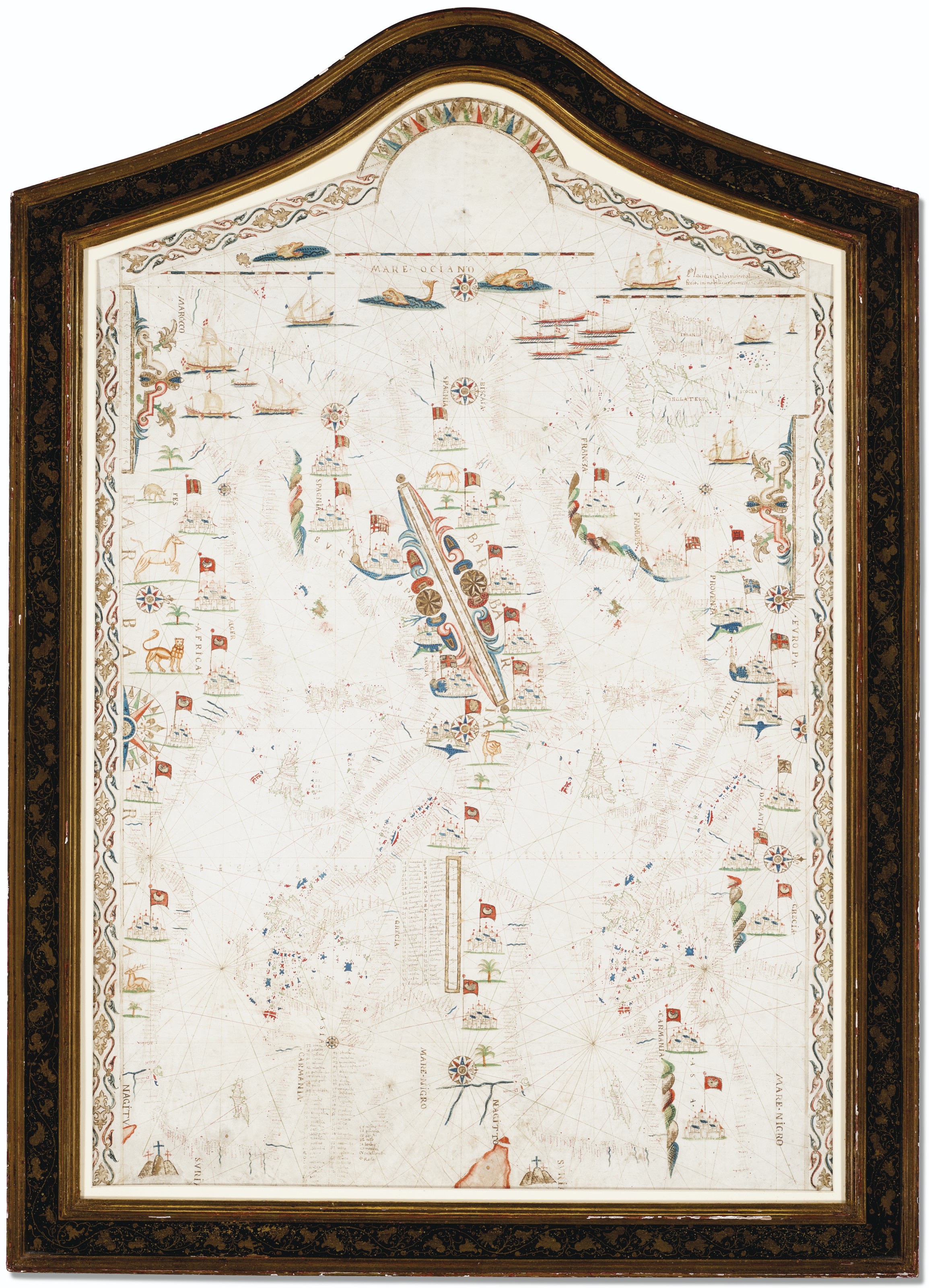 Portolan Chart of the MediterraneanPorto 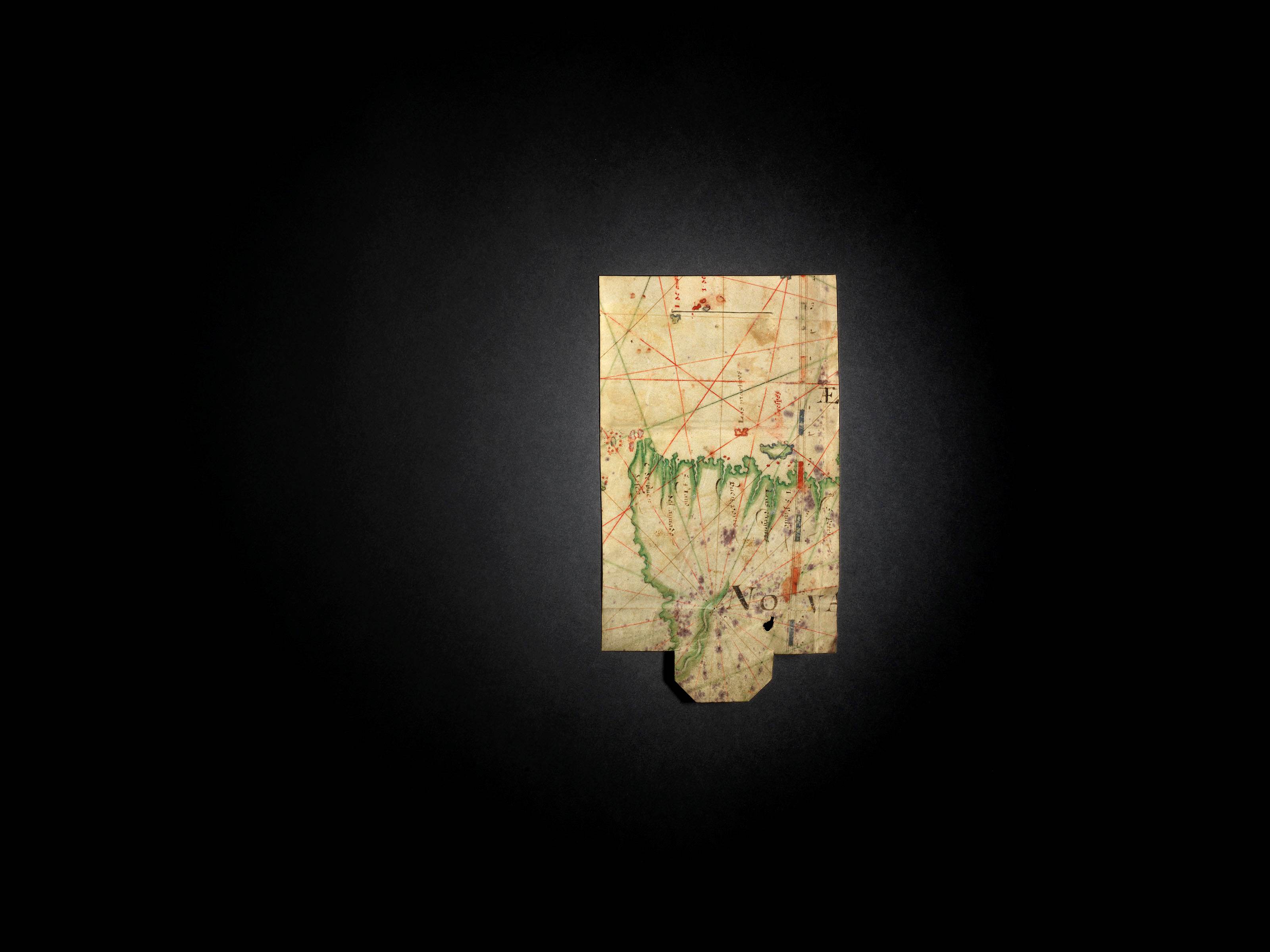