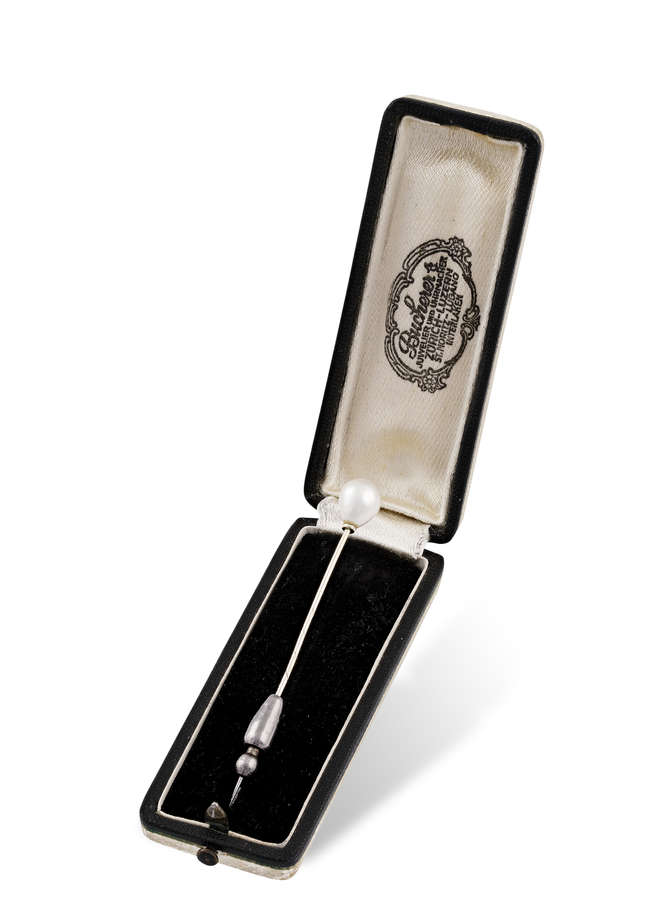 PLEASE NOTE: THIS LOT INCLUDES A PHOTOCOPY OF THE ORIGINAL INVOICE FROM BUCHERER, DATED NOVEMBER 25TH 1949*** A PEARL TIE STICK PIN The stick pin, with a drop-shaped pearl finial, measuring approximately 10.44 x 8.11mm, mounted in gold, length 7.3cm, cased 'Bucherer Juwelier und Uhrmacher, Zurich-Luzern, St Moritz-Lugano, Interlaken' Accompanied by a photocopy of the original invoice from Bucherer, dated November 25th 1949 Bucherer In 1988, Carl-Friedrich Bucherer and his wife Luise opened the first watch and jewellery store in Lucerne, Switzerland and laid the cornerstone for a successful family business. His sons Ernst and Carl Eduard Bucharer, joined the family-owned company in the 1920s and thanks to their wide-ranging experience, they took the company to even greater success. In 1924, Ernst Bucherer entered into a particularly fruitful partnership with Hans Wilsdorf, the founder of Rolex. He decided to include the then little-know watch brand in its range. Today Rolex is one of the worlds most celebrated watch brands and remains the House of Bucharers most important partner. Despite the crises of the 1930s and the second world war, the company continued to grow and opened branches in other Swiss cities and tourist destinations. In 1977, the third generation of family entrepreneurs took on the management of the flourishing company. Under the direction of Jörg G. Bucherer it expanded into Austria in the 1980s and Germany in the 1990s. In Switzerland, Bucherer acquired the Kurz Group in 1989 and Swiss Lion AG in 2001. That same year the independent Carl F. Bucherer company was founded to maintain the familys watch making tradition, established in 1919. Bucherer celebrated its 125th jubilee in 2013 and opened the worlds largest watch and jewellery store in Paris. House of Bucherer is one of Europess biggest watch and jeweller retail stores. The Bucherer brand has 16 exclusive stores in Switzerland, 10 in Germany, 4 in England, 1 each in Austria, Denmark and France. They stock a wide choice of luxury watches from well-known brands such as Rolex, Chopard, Piaget, IWC, Audemars Piguet, Girard-Perregaux, TAG Heuer, Tudor, Baume & Mercier, Longines, Rado and Gucci. House of Bucherer also design and produce well known jewellery collections in the companys own workshops. These jewellery lines include Lacrima, Vivelle, Variato, Pastello and Dizzler as well as individual pieces made using rare natural-coloured diamonds, unusual coloured gemstones or much sought-after pearls.

*** Please note this lot is now being au

Timothy Behrens Twins 1963 Oil on board

PLEASE NOTE THIS LOT IS WITHDRAWN FROM T

PLEASE NOTE THIS LOT HAS BEEN WITHDRAWN.