PETRARCA, Francesco. Das Glückbuch Beydes dess Gutten und Bösen. Translated from Latin into German by Stephan Vigilius. Edited by Sebastian Brant Augsburg: Heinrich Steiner, 1539.
PETRARCA, Francesco. Das Glückbuch Beydes dess Gutten und Bösen. Translated from Latin into German by Stephan Vigilius. Edited by Sebastian Brant Augsburg: Heinrich Steiner, 1539. 2 parts in one, 2 o (284 x 192 mm). Separately titled and foliated. Collation : a-b 6 c 8 ; A-S 6 T 8 ; V 6 Xx 4 ; Aa-Zz 6 aa 4 bb 8 . Gothic type. Translator's preface in part 1, editor's verse preface in part 2. Errata page at end. Title with large woodcut of the wheel of fortune, 261 woodcut illustrations by the Petrarca-Meister, a few full-page. Historiated woodcut initials from several sets. (A few running titles trimmed, some light browning and staining.) Contemporary French calf gilt (rebacked). Provenance : acquired from Wililam H. Schab, 1968. Second edition in German, first edition of this translation of De remediis utriusque fortunae, a vast moral compendium in the form of a series of dialogues on prosperity and adversity. The work enjoyed great popularity in the German-speaking parts of Europe, where--like all of Petrarch's Latin works--it had first appeared in print. In this edition each dialogue is introduced by couplets in Latin and German by Johann Pinician. The marvelous woodcuts, first used in Steyner's 1532 edition (of Stahel and Spalatin's translation), had originally been commissioned ca 1519-1520 by the Augsburg publishers Grimm and Wirsung, along with a series of cuts for a projected German Cicero, but publication of both works was repeatedly delayed. After Grimm's death the manuscripts and blocks, ready to be printed, lay for a time forgotten, until they were finally purchased "very dearly" (see Muther, p. 140) by Heinrich Steiner, whose Cicero appeared in 1531 (see lot 146), followed by the Petrarch a year later (33 of the Petrarch cuts first appeared in the Cicero). The anonymous Master of the Petrarch was identified as Hans Burgkmair by Muther, and more recently as Hans Weiditz by Campbell Dodgson, but neither attribution has been universally accepted. The engraver is known to have worked at least in part from sketches supplied by Sebastian Brant who oversaw production of both the Petrarch and Cicero series. After Steiner's death in 1548, the Petrarch blocks were acquired by the energetic Frankfurt printer Christian Egenolff, and continued passing from one Frankfurt printer to another, appearing in numerous editions of the Trostspiegel, as the work came to be known, and in other works, for nearly a century. "The 'Glücksbuch' [is] the most comprehensive representation of German life around 1519" (Thieme-Becker, vol. XXXV, pp. 271). BM/STC German, p. 686; Muther 887. 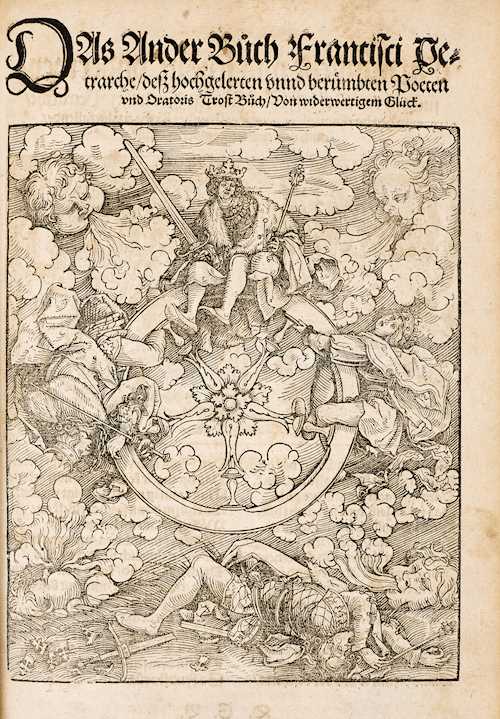