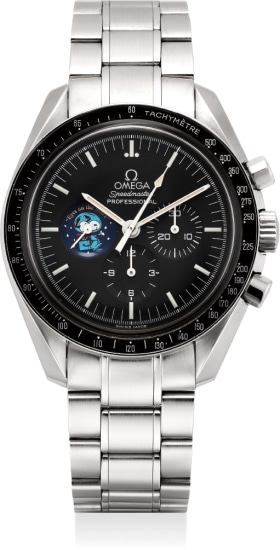 Omega Follow Ref. 145.0031 A fine and attractive stainless steel chronograph wristwatch with bracelet, warranty and box. Number 4118 of a 5441 pieces limited edition 歐米茄，「Speemaster Professional Snoopy」型號145.0031，限量版精鋼鏈帶腕錶，配計時功能，限量發行5441枚，編號第4118 號，約2003年製。附錶盒、國際保證卡、配件 Circa 2003 42mm Diameter Case, dial, movement and clasp signed
Manufacturer : Omega Year : Circa 2003 Reference No : 145.0031 Movement No : 77'120'758 Case No : 77'120'758, limited edition no. 4118/5441 Model Name : Speemaster Professional "Snoopy" Material : Stainless steel Calibre : Manual, cal. 1861, 18 jewels Bracelet/Strap : Stainless steel Omega bracelet stamped "849" to the endlinks, maximum length 215mm Clasp/Buckle : Stainless steel Omega deployant clasp Dimensions : 42mm Diameter Signed : Case, dial, movement and clasp signed Accessories : Accompanied by Omega blank international Warranty card, Certificate of Authenticity, product literature, cardholder, fitted presentation box and outer packaging Catalogue Essay One of the most whimsical - and collectable - modern Omega Speedmaster variations, the “Snoopy Award” is most easily identified through the prominent presence of beloved cartoon character Snoopy on the dial and case back. A limited edition piece launched in 2003, its apparent lightheartedness in fact hides a very serious, and incredibly important, part of Omega history. The Snoopy Award has been granted by Nasa since 1968 to institutions and individuals which have proven particularly valuable to NASA’s space exploration efforts. Of course, Omega had been official NASA timekeeper since the 1960s but in 1970 it played a truly crucial part in one of the most famous life-or-death situations in human history. When Apollo 13 malfunctioned, causing the abortion of its trip to the moon, the astronauts onboard had to first repair the craft - which had suffered an explosion - with material salvaged onboard, and then use the rockets to return to earth. Without advanced computing, the engine activation time had to be managed manually. Too short or too long bursts - with minimal tolerances - would have caused an inevitably tragic end of the mission. Using their officially issued Speedmaster chronographs, the crew manage to successfully re-entry on earth - as immortalized by the 1995 Ron Howard movie - and NASA granted Omega a Snoopy Award in recognition of the vital part it played during the crisis. The Snoopy Award Speedmaster is a commemoration of such a remarkable milestone in the history of the company. Read More Maker Bio Omega Swiss • 1848 Follow Omega's rich history begins with its founder, Louis Brandt, who established the firm in 1848 in La Chaux de Fonds. In 1903, the company changed its name to Omega, becoming the only watch brand in history to have been named after one its own movements. A full-fledged manufacturer of highly accurate, affordable and reliable watches, its sterling reputation enabled them to be chosen as the first watch company to time the Olympic Games beginning in 1932. Its continued focus on precision and reliability ultimately led their Speedmaster chronograph wristwatch to be chosen by NASA in 1965 — the first watch worn on the moon. Key models sought-after by collectors include their first, oversized water-resistant chronograph — the reference 2077, early Speedmaster models such as the CK 2915 and 2998, military-issued versions of the Seamaster and oversized chronometer models such as those fitted with their prestigious caliber 30T2Rg. View More Works