Mixed Lot of Autographs, Imprints, Advertising, and More, Lot of 155 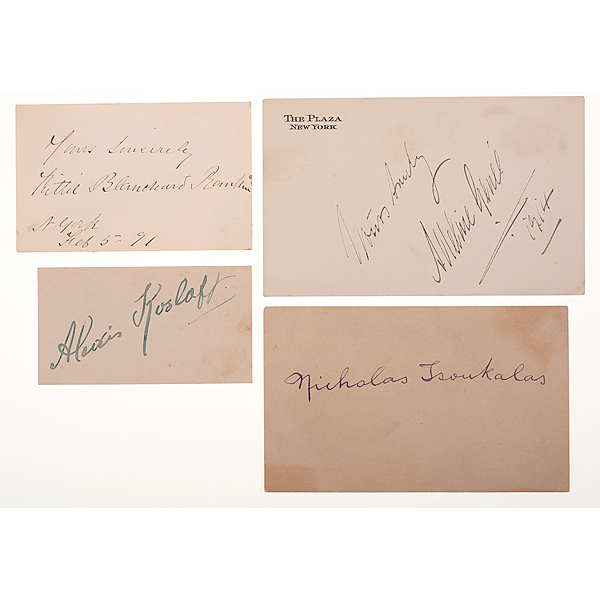 Lot of 155. ANS on 5 x 8 in. card with The Chicago Herald, Washington Office letterhead, signed Walter Wellman. Received 22 Nov. 1894. Wellman is requesting from Mr. Hill the photos, negatives, etc. of the Arctic series. Walter E. Wellman (1858-1934) was a journalist and explorer. Born in Mentor, Ohio (the adopted home of future president James Garfield), Wellman became the Washington correspondent for the Herald.He had that "exploratory gene," however, and engaged in adventures such as trying to locate the exact spot where Columbus set foot in the New World. He became determined to win the "Race to the North Pole," first with an expedition to 81o North latitude in 1894, then to 82o N. in 1898-1899. When the second attempt ran into trouble, he and his team left. Then on New Year's Eve, 1905, he announced that he would reach the pole by airship. The newspaper provided the first quarter of a million dollars to build the airship, but the engines blew on the test flight. He rebuilt and tried again in 19907, then 1909, plagued by mechanical failures each time. He enlarged the vessel ("America") and tried again in 1910, but the engines failed again (at least the test flights were in temperate and tropical climates), the ship . A second zepplin was built the following year, the "Akron," which exploded on its test flight, killing all five aboard, including Melvin Vaniman, who had survived the "America." Included in the lot is a clipped signature of Lowell Thomas (1892-1981), writer, broadcaster, traveler. Thomas is best known as "the man who made Lawrence of Arabia famous." He wrote over 50 books, many with travel themes. Lot of 4 cards signed by the following professional dancers: Nicholas Tsoukalas; Civil War-era American dancer and actress Kitty Blanchard Rankin; Moscow-schooled Russian ballet dancer Alexis Kosloff; and Danish-born ballet dancer and pantomimist Adeline Genee (1878-1970). Lot of 4 items, two Japanese currency notes and a letter and envelope from a Japanese Company to Otto Cohen. Lot of 16 miscellaneous items such as: signed Christmas cards from 1881, 1916, and a 1926 Pamphlet titled "Watt's Songs : Good Examples" by Issac Watts, published by McLoughlin Bros in 1890; a Christmas card from 1924; an advertising item for tobacco titled "Puffs of Wisdom" copyright 1880; a composition book from Oliver H. Eedma, 1862; a photograph of the Yorktown, dated 1968; a Masonic membership card from 1924; a Ford motor company letter and folder that describes and illustrated new 1939 line of cars; pictorial advertising for Magno-Mud Cure & Lithia Water Baths; a letter from J.G. Fifield, Captain, U.S. Navy titled " The Fighting Lady Family-Gram " about the recovery of Apollo 8 dated December 1968; two fifth grade art assignments from 1900, and more. Lot of 5, comprised of 4 signed photograph and a signed card from professional North American athletes, including: one of the best track runners in the history of Cornell track and field, Bob Mealey; the voice of Hockey Night in Canada and right winger for the Toronto Maple Leafs, Howard "Howie" Meeker (1923-present); nationally recognized, high-scoring lacrosse legend for the University of Delaware, Don Swan; Olympian Hayes Jenkins (1933-present), a four time World Figure Skating champion, two-time gold medalist, and one-time silver medalist; and Pan American Games tennis champion, Eddie Moylan (1923-20015). Lot of 11, including signed cards, clipped signatures, and typed letters signed by the following University educators: acclaimed historian Dr. Edward Channing (1856-1931), author of the 1926 Pulitzer Prize winning six volume piece, The History of the United States; TLS from the longest serving president at the University of Michigan, James B. Angell (1829-1916); educator, C.R. Richards; founding president of Stanford University, David Starr Jordan (1851-1931) who also acted as a star witness for the Scopes Trial in 1925; 9th president of Dartmouth College, W. J. Tucker (1839-1926); hi 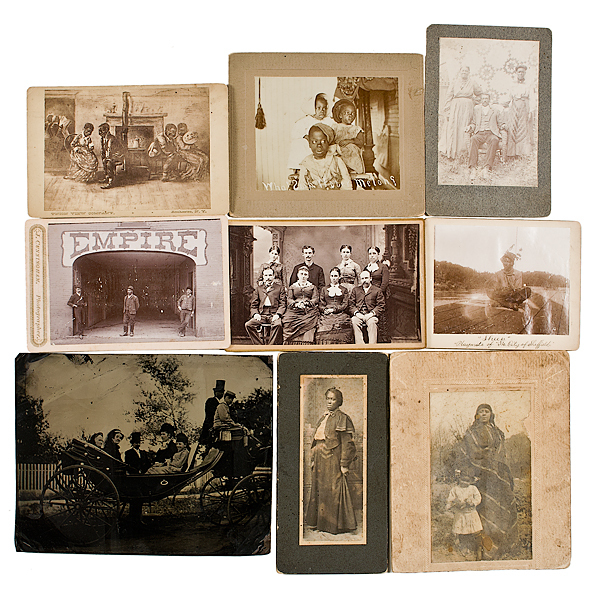 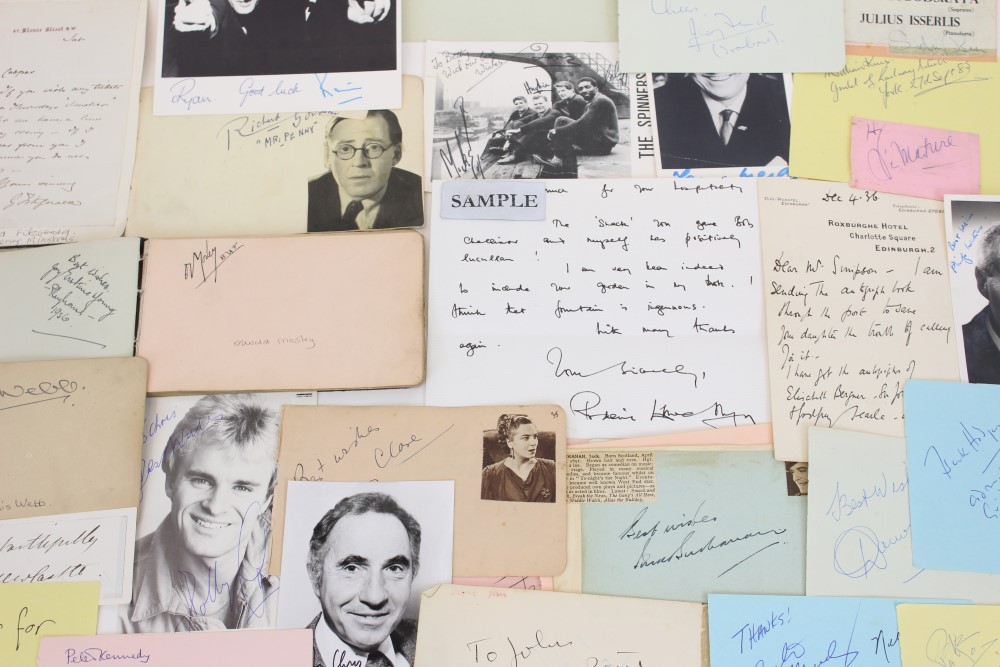 A mixed box of football ephemera to incl 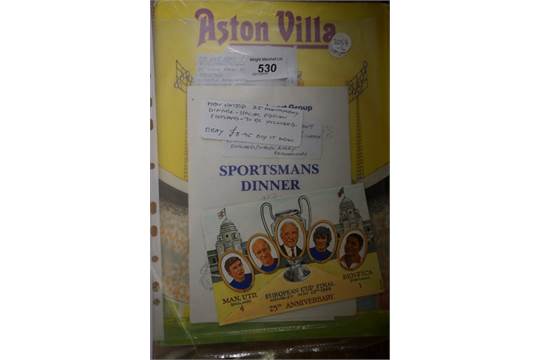 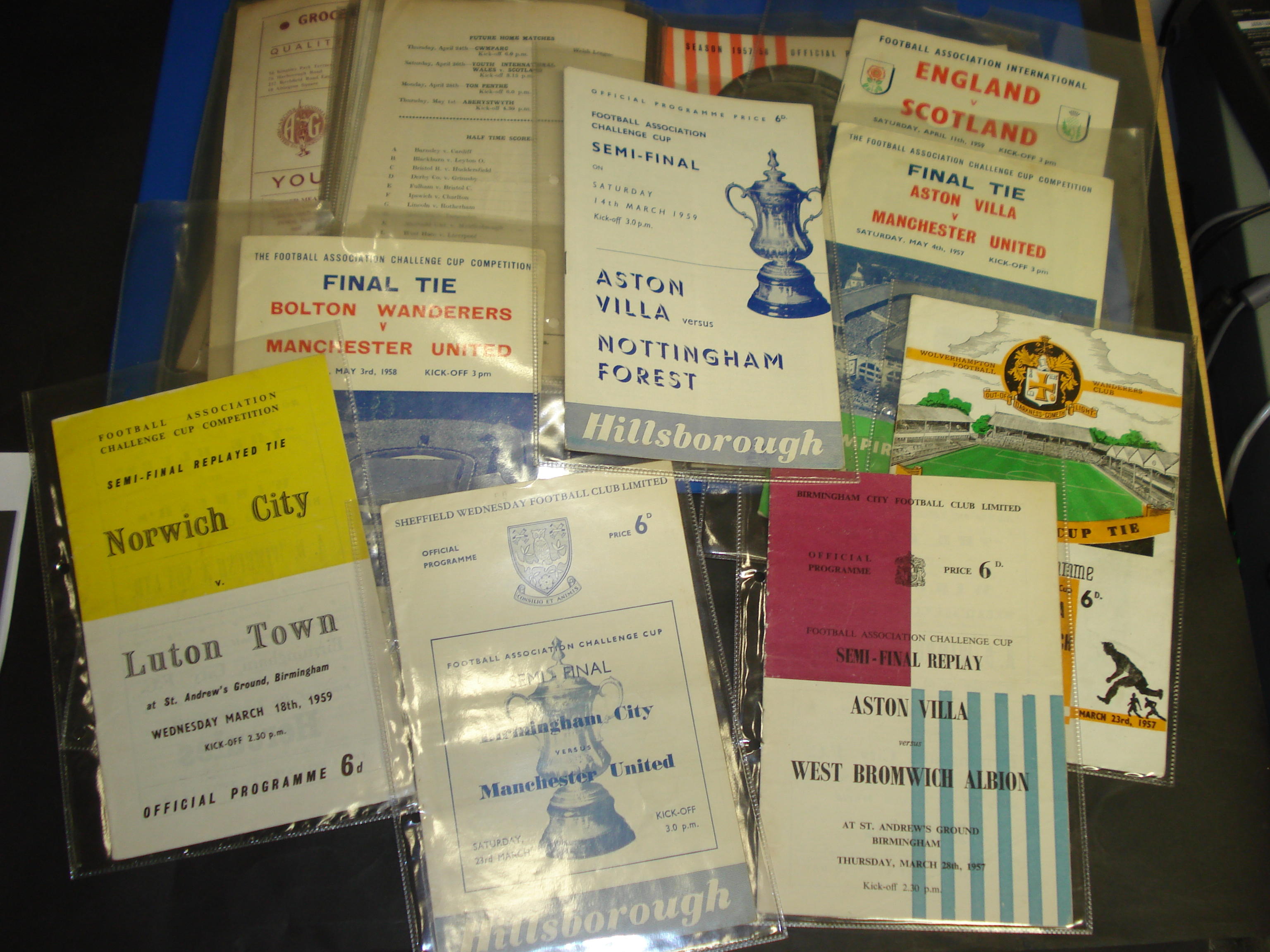