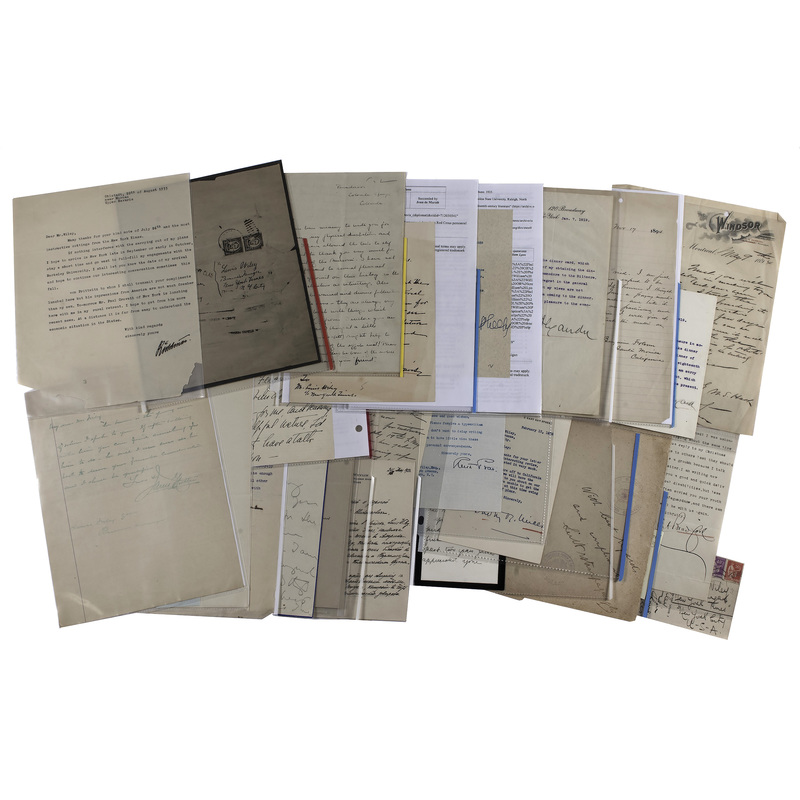 Lot of 33. A number of these are difficult to read; others are signed with initials of common surnames and we could not narrow down an individual (for example C. Alexander). Most of the identified writers are not "household names." ALS, 4pp, Broadmoor, Colorado Springs, CO, Jan. 9, 1916. The signature appears to be "William B. Rogers," but we were unable to identify him specifically. The letter, nonetheless has some interesting content. He humorously begins: "I have been meaning to write you for some time but between my physical disabilities and my natural laziness, I have allowed the time to slip by." He goes on to thank Wiley for a book he sent, and in return "I enclose you an "ad" for todays Denver Post as I thought a little Western "gumption" ... might help to revitalize your emasculated press of the effete east!" He makes reference to his health (apparently the reason he is out in Colorado) and the fact that people seem to want to stay out of the war. Then he gets to the "meat" of the issues: "They have passed a prohibition law in this state which is illustrative of the way that we are so apt to tackle a problem in this country, namely through a policy of fanaticism. I think any fair minded person who was familiar with the condition of the mining camps of this state & the senseless abuse in the use of alcohol would agree that something should be done to ameliorate these wretched conditions....But instead of endeavoring to remedy these ills by some sane method like the Gothenburg system which had been tried with so much success in the Scandinavian countries & in parts of England, the problem has resulted in an uncompromising struggle to the death between what the newspapers call the "liquor interests" and the teetotalers. After a fight of many years the latter have had a complete and overwhelming victory with the result that it is now against the law to buy, sell or give away anything that can either be eaten or drunk that contains alcohol. It is just as illegal to sell a slice of mince pie as it is to sell a drink of whiskey. Flavoring extracts are just as much taboo as "rock gut." [sic] The N.Y. Times if it contains any advertisements for wines, beers or any alcoholic beverages can not be sold on any newsstand in the state. As a doctor can only give a prescription for a maximum of four ounces of anything alcoholic, that can be consumed as a beverage, it would need two seperate [sic] doctors prescription to enable a person to get sufficient alcohol for a rub. And so on ad infinitum." He goes on to mention the illegal behaviors (some turning a blind eye to sales in remote resorts) and cheap moonshine already showing up. Also the financial impact. In the postscript he mentions that "Grace and the children get here tomorrow," which might help someone identify this gentleman. Two letters signed W.S. Hart, one on The Windsor, Montreal letterhead, dated May 9, 1894; another on 6 x 7 in note paper, 2pp, Brooklyn, 5 June 1894. Both make some references to ads and photos, so this could maybe be William S. Hart, actor and early star of Western films. Hart was born in Newburgh, NY, and worked in various stage companies around the country, but had some success as a Shakespearean actor on Broadway. He was also in the original stage production of Ben-Hur, and went on to become an early movie star. ANS, 5.5 x 7.5 in., Beverly Hills, CA, n.d. (ca. early July 1934 based on date of acknowledgement). From Janet Beecher, actress. Introducing her publicist and asking Wylie if he will speak with her. Beecher, born Janet Meysenburg (1884-1955) worked on Broadway and on screen. Two notes on 4 x 5.25 in. cards with mourning borders. Both with address of "One East Sixty-second Street" at top. no dates, but James Clews died ca. 1934. Both thanking Louis for his letters of sympathy. One is signed Leta Clews (1910-1991). The other is signed Ann Clews, likely Mary Ann Payne Robertson Clews (m. 1926). James Clews' first wife, Leta Nichols, died in 1919 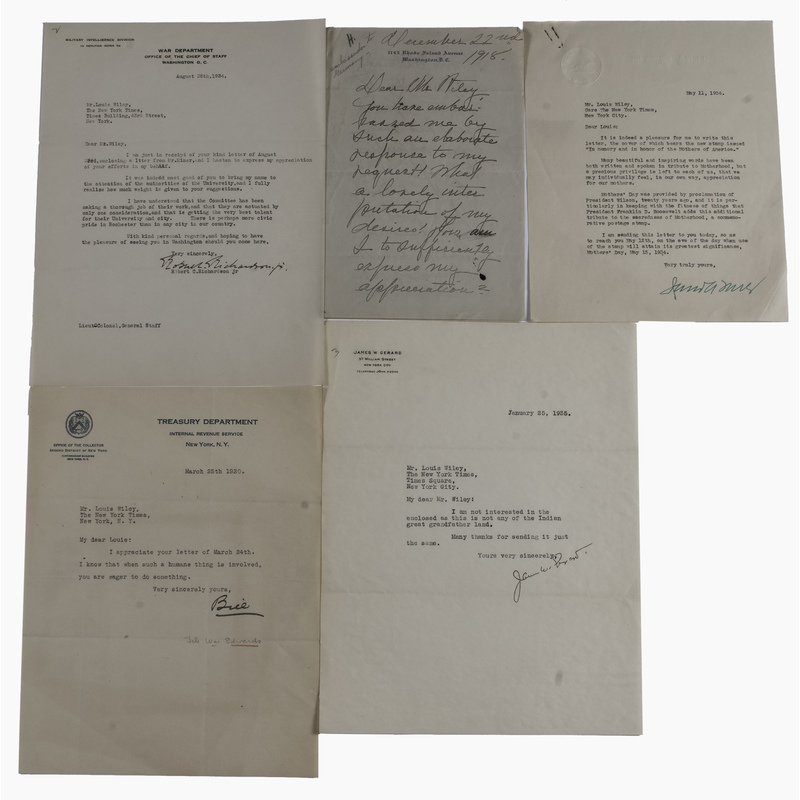 Letters to Louis Wiley from Washington a 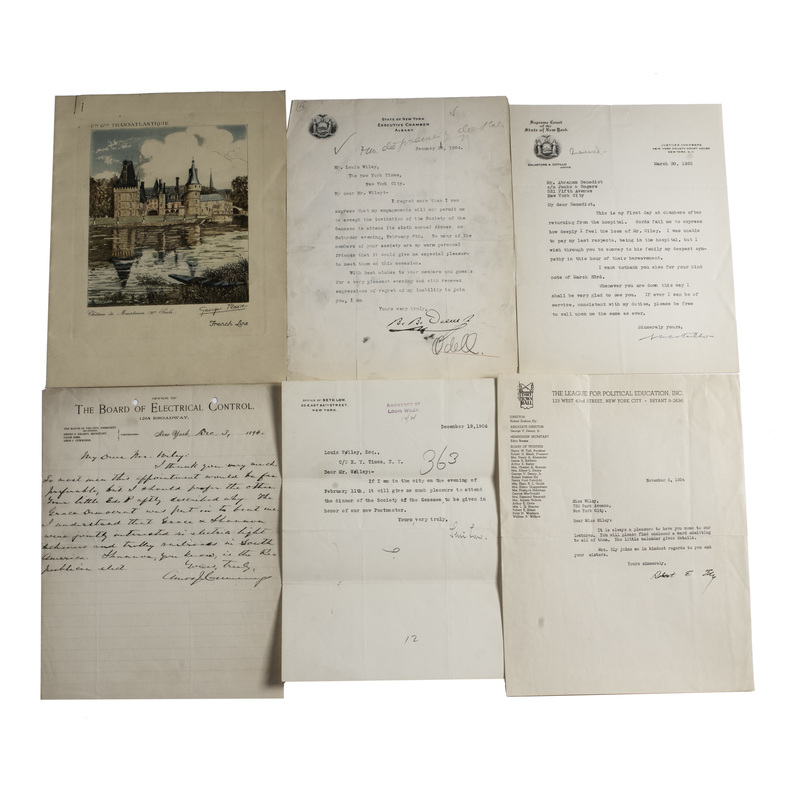 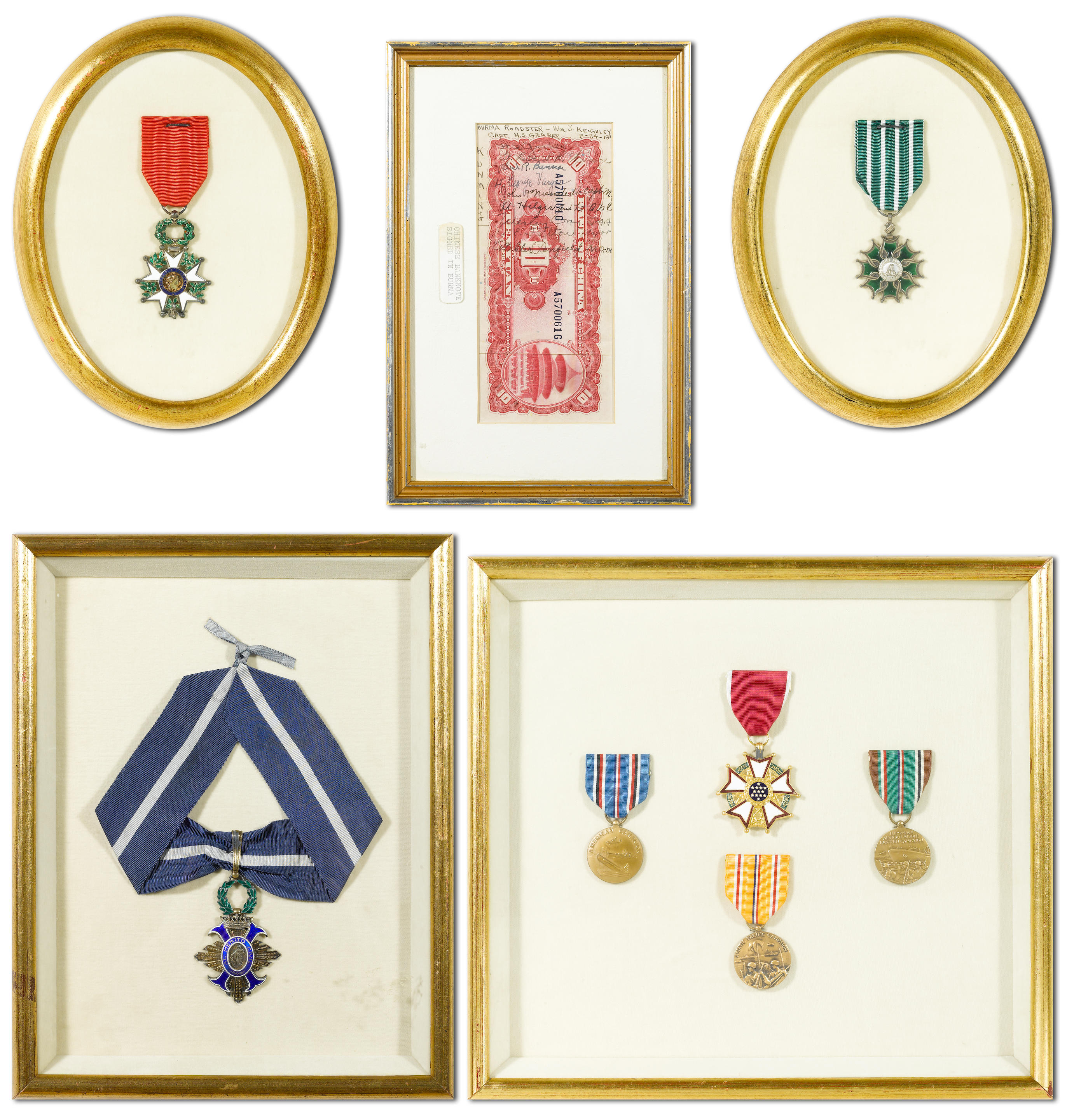 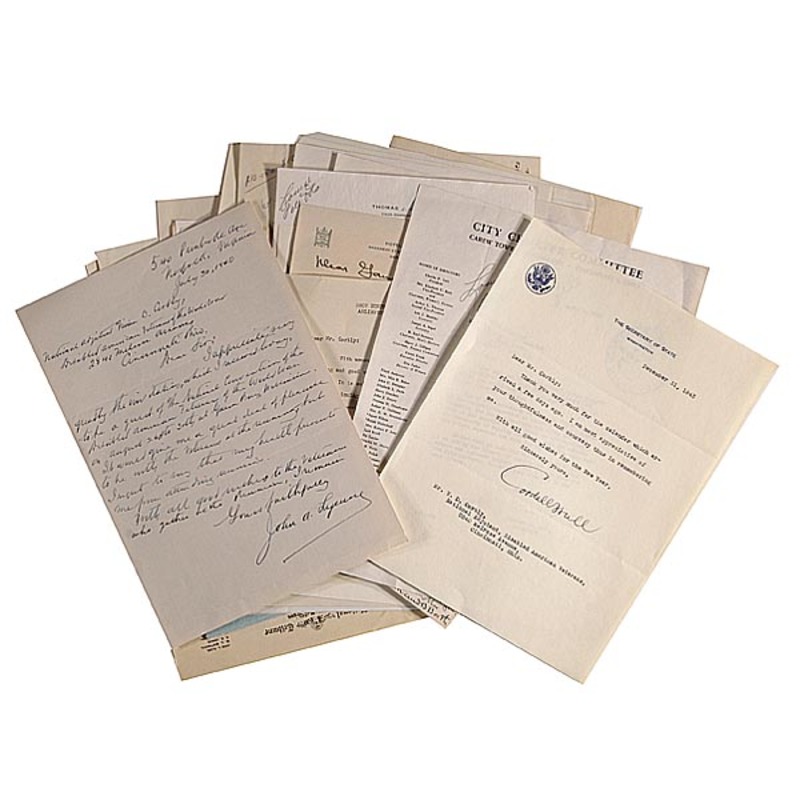 Large Group of Miscellaneous Letters and 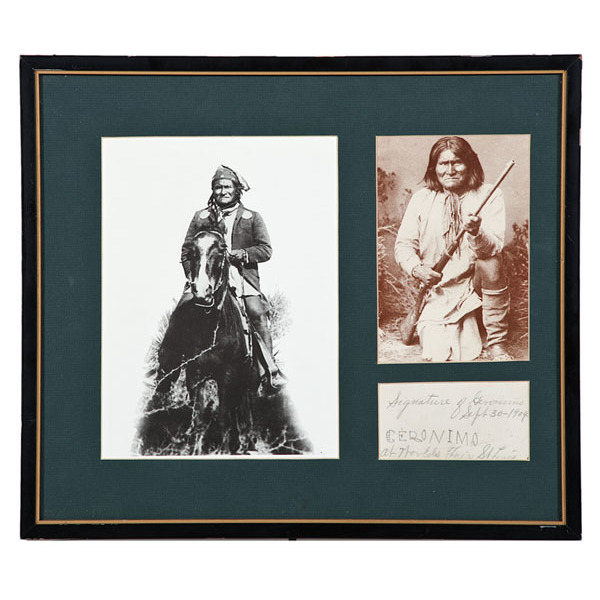 Geronimo Signature from the St. Louis Wo 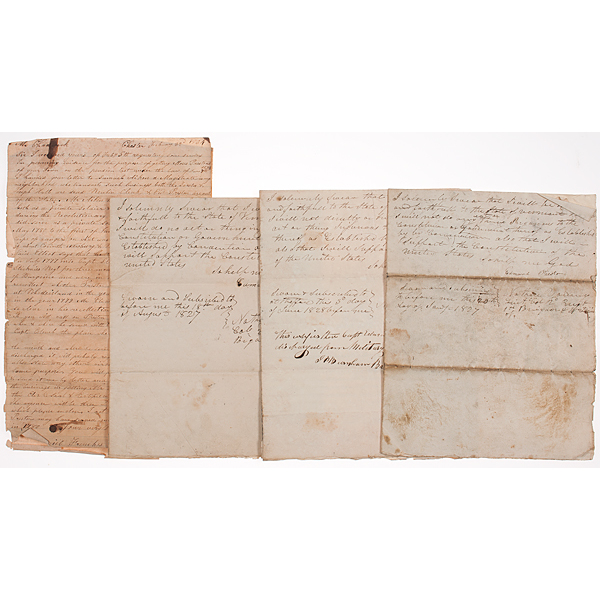 Miscellaneous US Military Appointments a 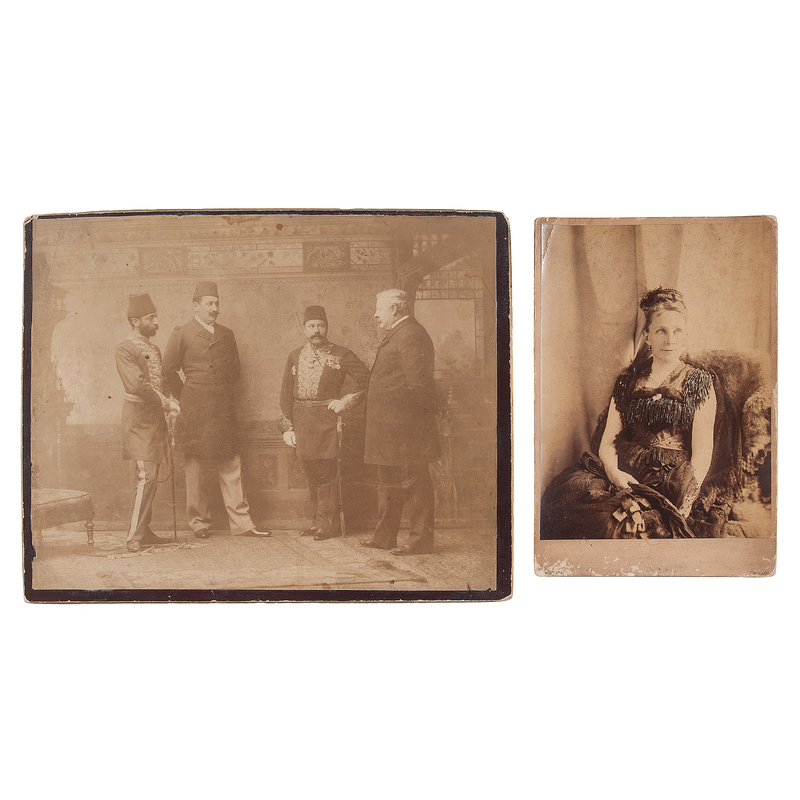