MAURICE BRAZIL PRENDERGAST (american 1858–1924) "THE POINT, GLOUCESTER" Signed 'Prendergast' bottom right, oil on canvas 17 5/8 x 21 3/8 in. (44.8 x 54.3cm) Executed in 1907-1910. provenance: The Artist. The Artist's brother, Mr. Charles Prendergast, 1924. Mrs. Charles Prendergast, Westport, Connecticut, 1948. Collection of Mr. Robert Carlen, Philadelphia, Pennsylvania. Acquired directly from the above in 1965. Collection of Mr. and Mrs. Meyer Potamkin. Sotheby's, New York, "American Paintings, Drawings & Sculpture from the Collection of Meyer and Vivian Potamkin," sale of May 21, 2003, lot 57. Acquired directly from the above sale. Collection of Dorrance H. Hamilton. exhibited: "The M.P. Potamkin Collection," The Dallas Museum of Fine Arts, Dallas, Texas, January-March 1970, no. 56. "An Alumnus Salutes Dickinson College 200th Anniversary" (From the Collection of Mr. and Mrs. Meyer Potamkin), William Penn Memorial Museum, Harrisburg, Pennsylvania, November 1972-January 1973, no. 125. "American Art From the Collection of Vivian and Meyer P. Potamkin," Pennsylvania Academy of the Fine Arts, Philadelphia, Pennsylvania, June-October 1989, p. 13. literature: Carol Clark, Nancy Mowll Mathews and Gwendoly Owens, Maurice Brazil Prendergast, Charles Prendergast: A Catalogue Raisonné, Williams College Museum of Art, Williamstown, Massachusetts; Prestel, Munich, 1990, no. 211, p. 254 (illustrated). note: Maurice Brazil Prendergast is best known for his colorful depictions of the middle class. Born in Saint John's, Newfoundland in 1859, he spent his childhood and young adulthood in Boston, where he quickly became captivated with the rugged landscapes of the New England seashore. From 1891 to 1894, Prendergast studied in Paris at the Académie Colarossi and at the Académie Julian where he was introduced to avant-garde and Post-Impressionist painters such as Édouard Vuillard (1868-1940) and Pierre Bonnard (1867-1947). However, it was the works of Paul Cézanne (1839-1906) that impacted him most significantly. In his works, Prendergast mimicked Cézanne's expressive use of form and adopted his love for color variations, admitting himself: "Cézanne gets the most wonderful color, a dusty kind of grey" (quoted in Nancy Mowll Mathews, Maurice Prendergast, 1990, p. 25). Upon his return to the United States, Prendergast settled in Winchester, Massachusetts, where he started to observe and eventually depict the popular leisure activities of the region. From then on, and throughout his career, Prendergast depicted a vibrant world of crowds enjoying themselves in parks, at the seashore, and in cities. While these scenes are pleasant and seemingly simple, Prendergast in fact paid great attention to his style. In each of his works, he painstakingly reconciles different color harmonies, joining them together in a complex patchwork of free brushstrokes, vivid dots and patches of bold tonalities. In an essay that appeared in The Arts in March, 1924, a month after the artist's death, collector Duncan Phillips wrote that Prendergast was "a purist in regard to the (…) synthesis of the decorative and representative functions of his art (…) he persisted in reducing his observations of the visible world and his joyous emotions in the presence of nature to a simple but beautifully organized pictorial pattern." Prendergast was interested in capturing spontaneous moments in nature that would produce a visual experience for the viewer. Through color, which he loosely applied to suggest movement and texture, the artist created an emotional scene that ravished the spectator; an innocent, yet bold spectacle for the eyes. Dated 1907-1910, "The Point Gloucester" is a fine example of Prendergast's oeuvre. It poignantly illustrates his (then) new approach to composition, color and brushwork, which he had just learned in Paris. Like French artists Henri-Edmond Cross (1856-1910) and Paul Signac (1863-1935), Prendergast here accentuates the flatness of the painting, which he di 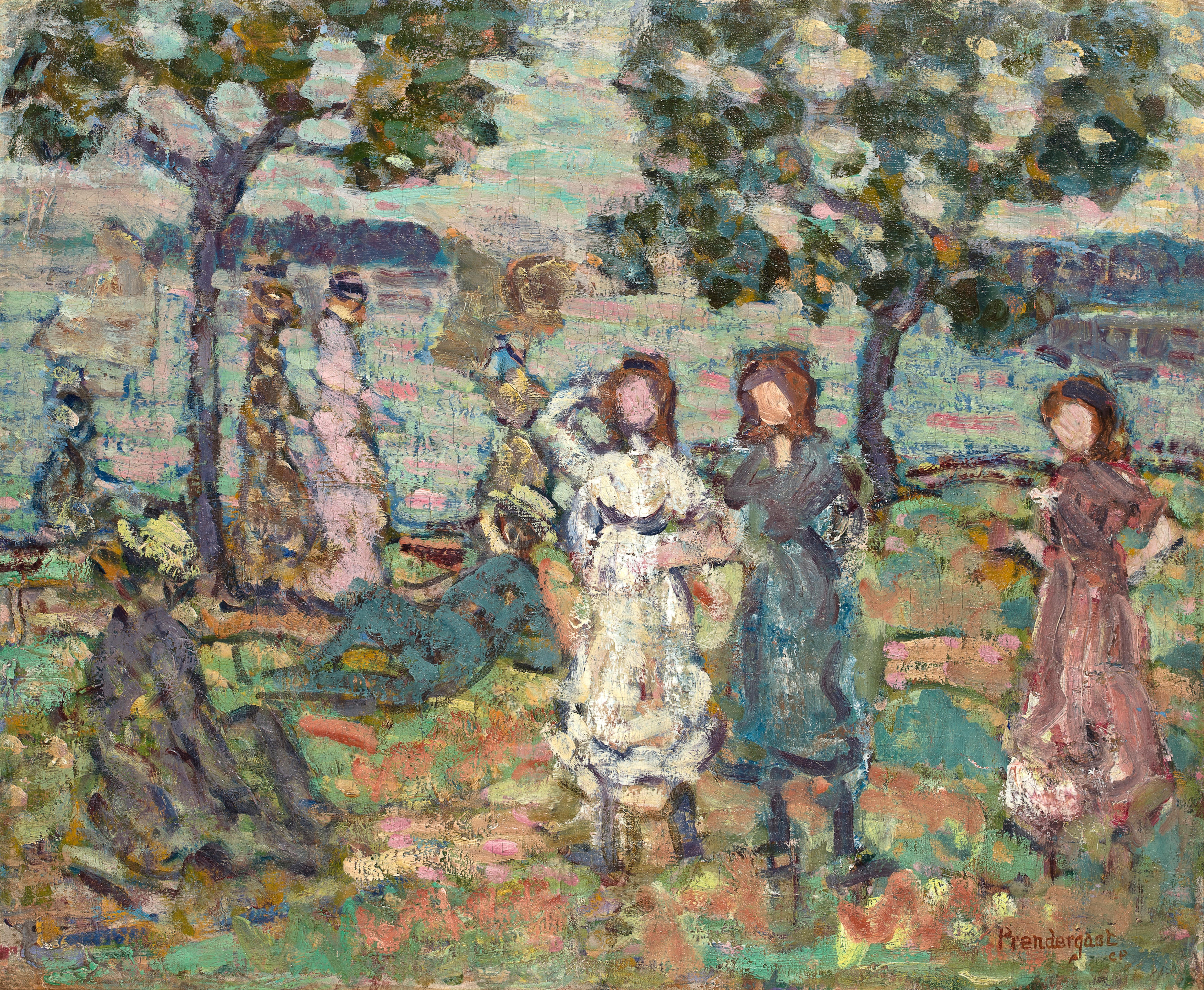