Marc Chagall La joie au cirque signed "Marc Chagall" lower right; further signed "Marc Chagall" on the reverse oil and tempera on canvas 31 1/2 x 45 1/2 in. (80 x 115.6 cm.) Painted in 1983. The Comité Marc Chagall has confirmed the authenticity of this work.
Provenance Atelier Marc Chagall, Saint-Paul Galerie Kornfeld, Bern, June 6, 2008, lot 20 Private Collection Sotheby's, London, February 3, 2009, Lot 29 Acquired at the above sale by the present owner Catalogue Essay Rendered in bold, vibrant hues, La Joie au cirque coalesces Marc Chagall’s iconic motifs and stylistic features. Musicians, lovers, horses, cows, roosters, acrobats, and a flower bouquet serve as a visual retrospective of the artist’s celebrated lifetime of painterly triumphs. La Joie au cirque is an illustration of the inner workings of Chagall’s mind poured onto the canvas in a mirage of kaleidoscopic colors. The circus theme for Chagall is one to which he returned throughout his life. Unlike Picasso, who rendered circus performers as marginalized members of society, Chagall’s colorful depictions of acrobats celebrate the pageantry of theatrics of Big Top entertainers. Joyous and lively, the circus simultaneously represents the mysterious play of magical deception tinged with the dangerous, physical distortion in which the performers find themselves as they swing from the rafters, suspended in space. Chagall describes the circus as “a timeless dancing game where tears and smiles, the play of arms and legs take the form of a great art.... I have always thought of clowns, acrobats and actors as tragically human beings who, for me, are like characters in certain religious paintings” (Marc Chagall quoted in "The Circus" in Jacob Baal-Teshuva, ed., Chagall: A Retrospective, New York, 1995, pp. 196-198). The musicians and actors, painted in soft blues and supple greens are separated by color from the primary colored rooster and the cityscape seen in the right, upper quadrant of the composition. Worked into this composition of a circus scene is a bouquet of French flowers floating in mid-air, and sprouting from the bouquet is a single outfitted acrobat, who balances upon the tiny, colorful blossoms. “Marc Chagall loved flowers…..he delighted in their aroma, in contemplating their colors. For a long time, certainly after he moved for good to the South of France, there were always flowers in his studio. In his work bouquets of flowers held a special place...Usually they created a sense of joy, but they could also reflect the melancholy of memories, the sadness of separations, of solitude, if not suffering and tragedy” (André Verdet in Jacob Baal-Teshuva, ed., Chagall: A Retrospective, New York, 1995, p. 347). The free floating, overlapping motifs in this painting also refer to the gravity defying feats of the circus troupe. The farm animals—the red rooster, red horse and bright yellow cow—are rendered in bold, vivid colors, alluding to Chagall’s Russian roots, the outlined roof tops depict the Belorussian town of Vitebsk, Chagall’s childhood home. Chagall embeds these allusions to his past in every painted form; they serve as introspective and nostalgic mementos of the landscape of his childhood. Like every pleasant and hallucinatory dream of one’s childhood past, each element in La Joie au cirque possesses a deep and unconscious significance that slips further and further out of reach. Time collapsed as Chagall’s mind was flooded with romantic and distinct memories of the past. Indeed, La Joie au cirque balances, like an acrobat swinging between the past and the present, between the contradictory conditions of dreams and reality. Read More 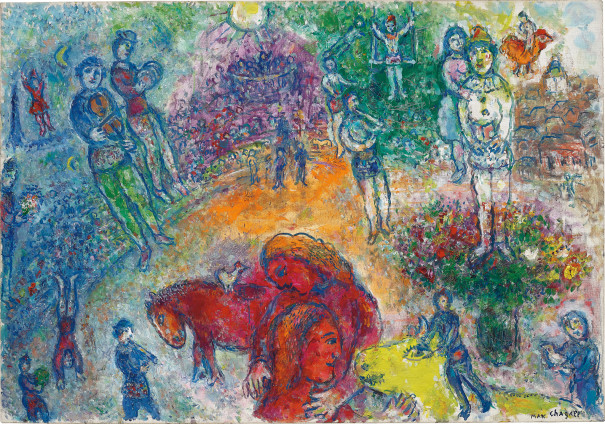 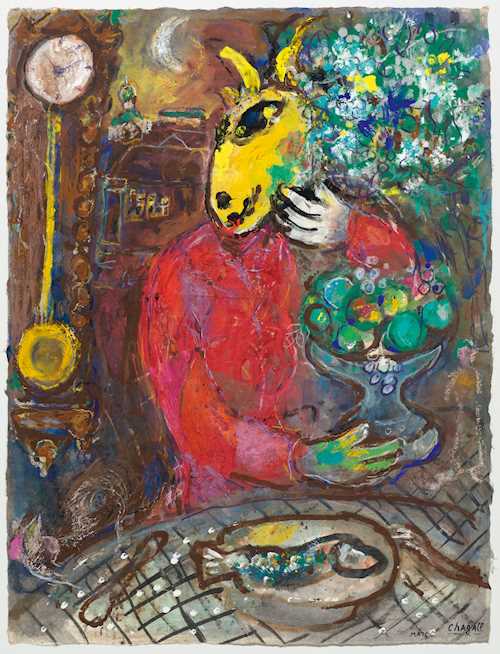 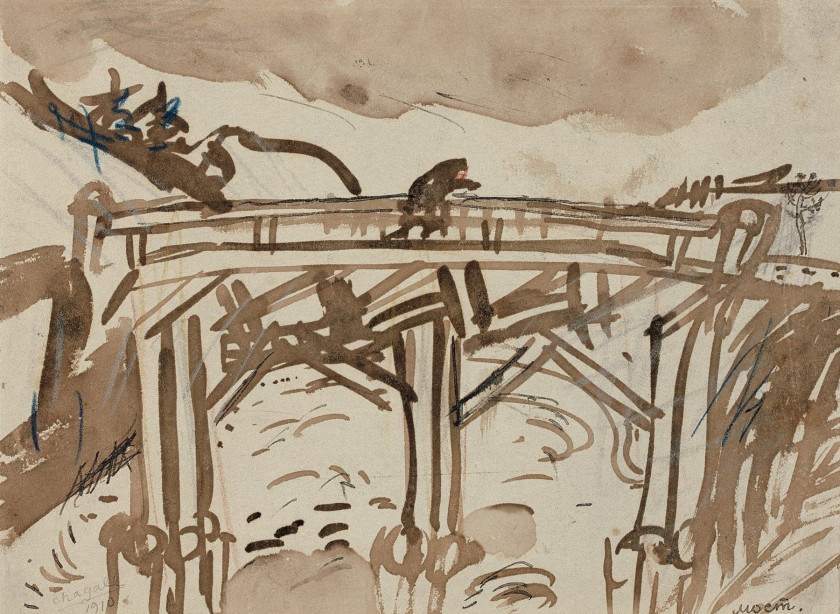 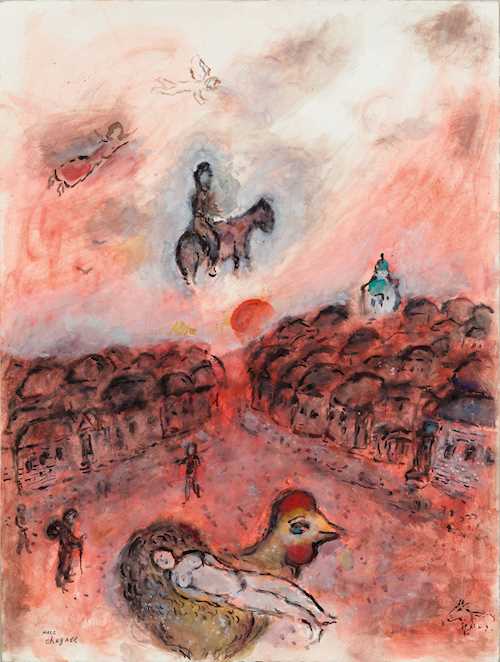 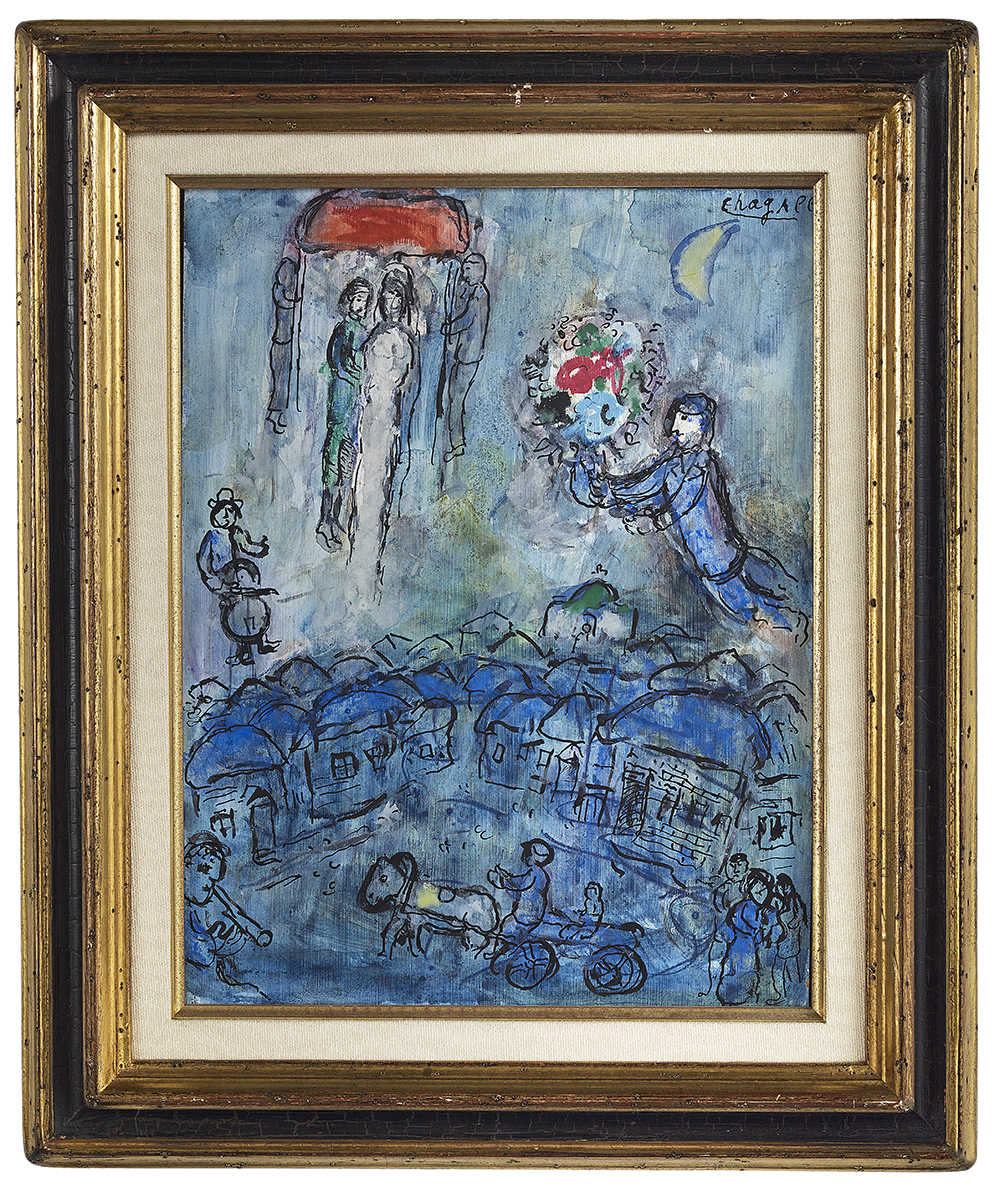 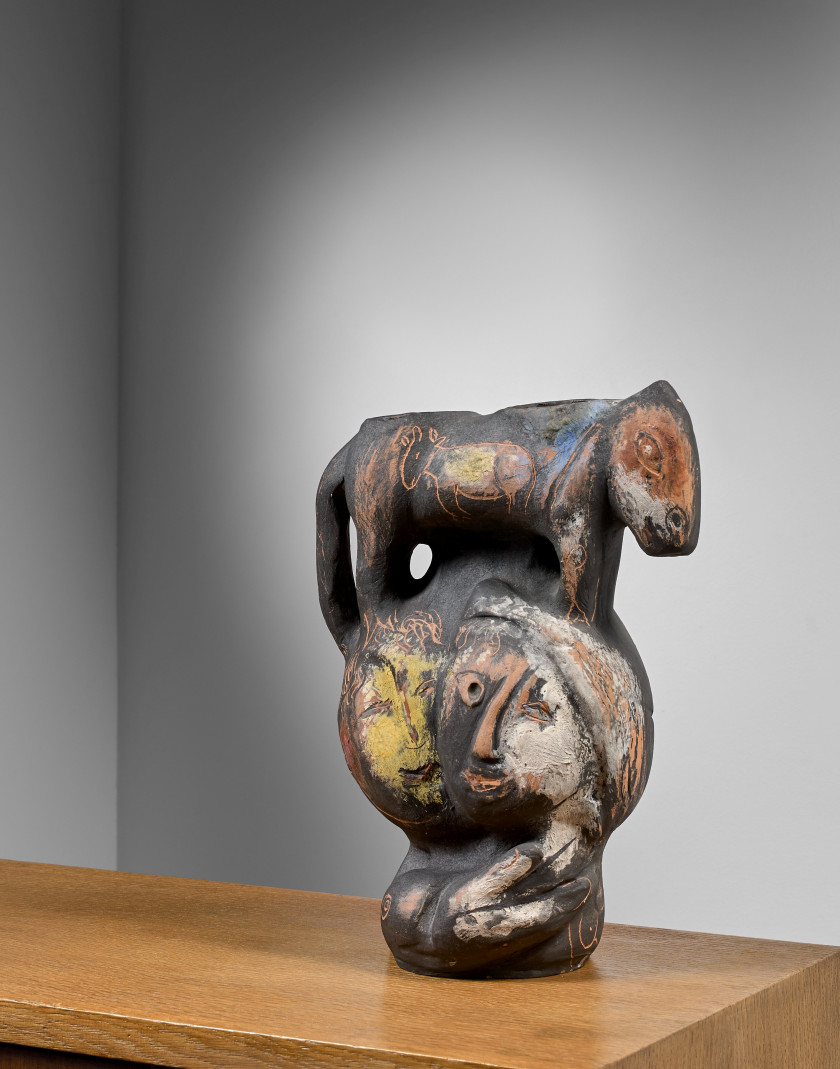 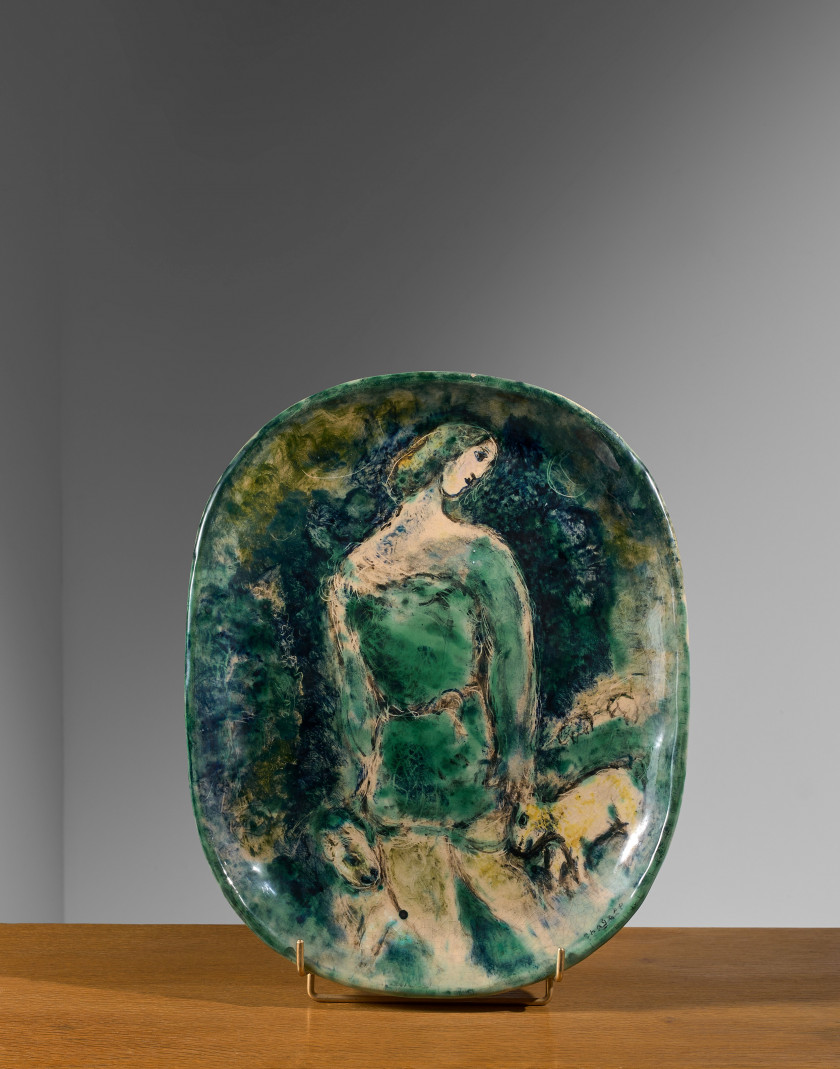 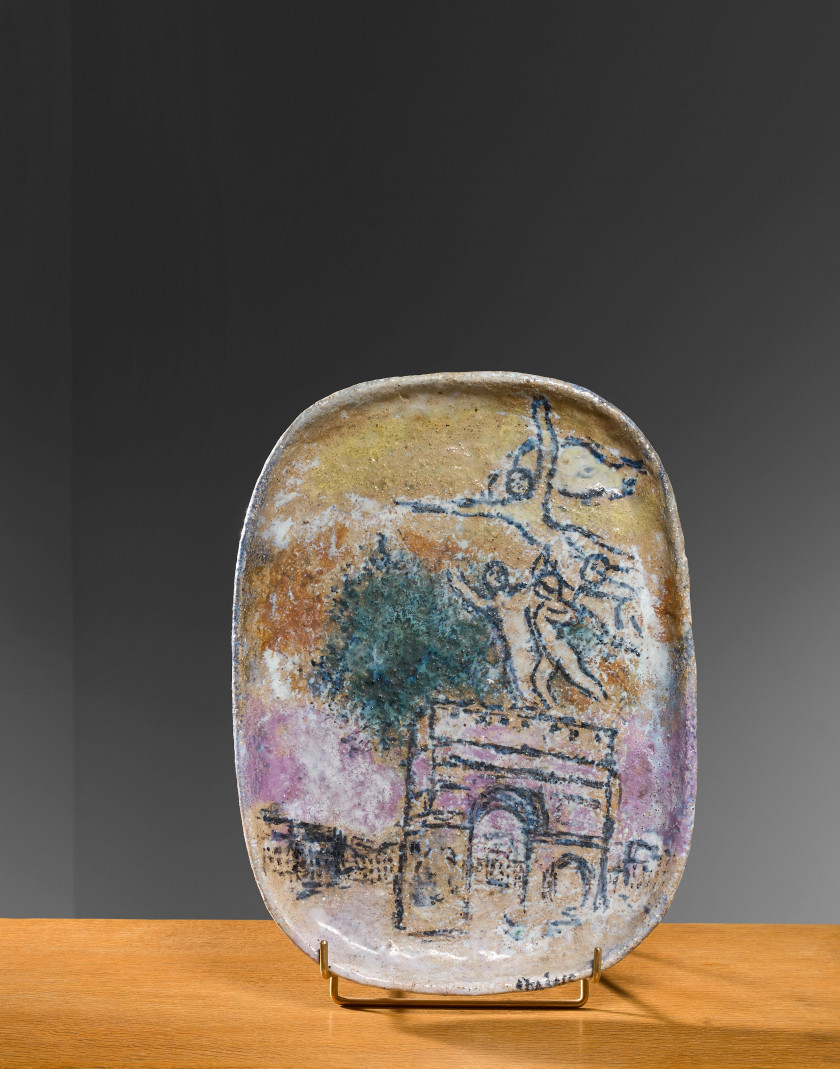 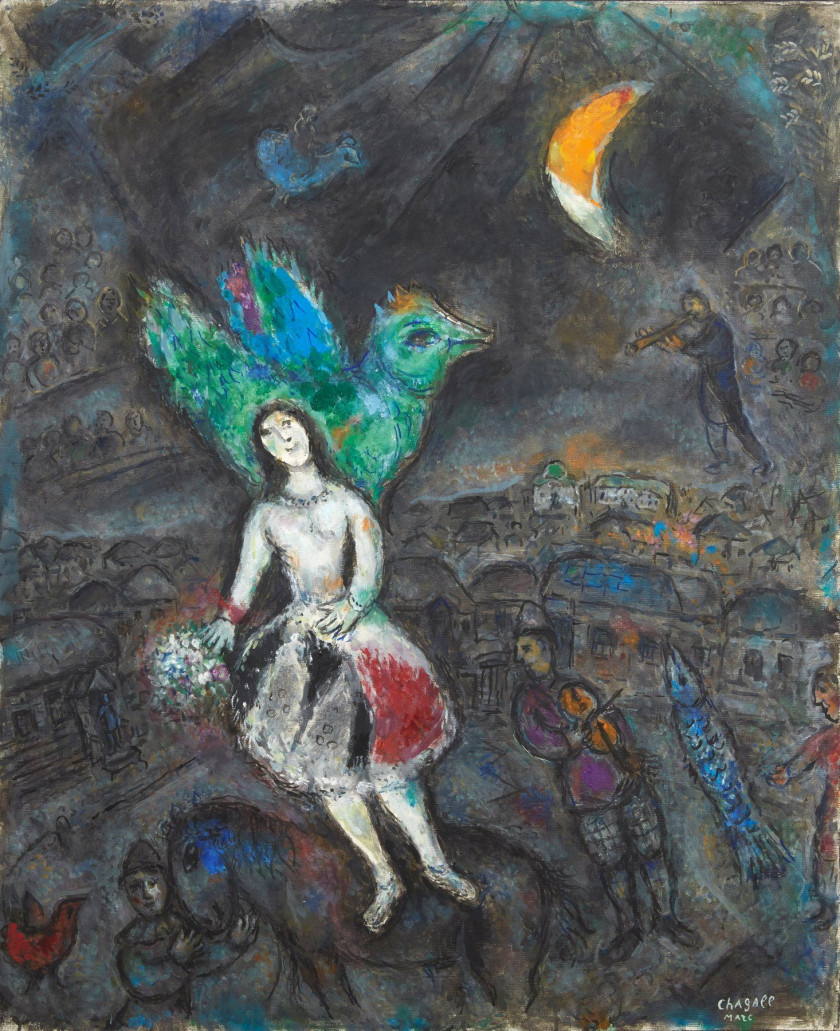 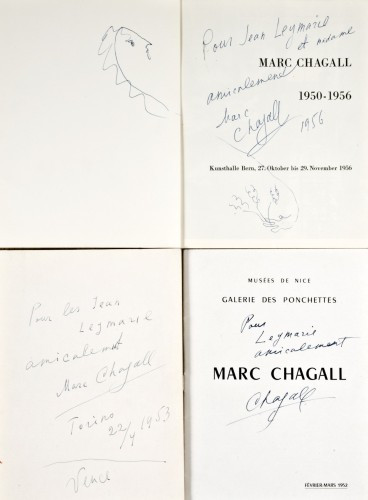 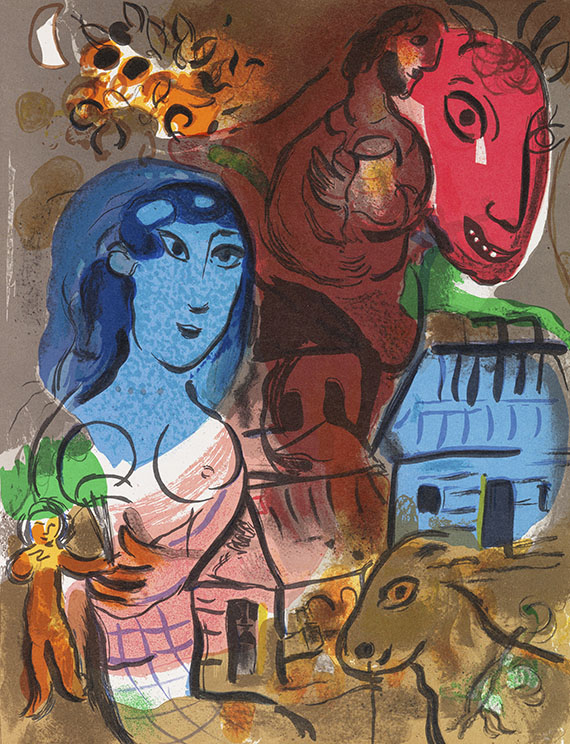 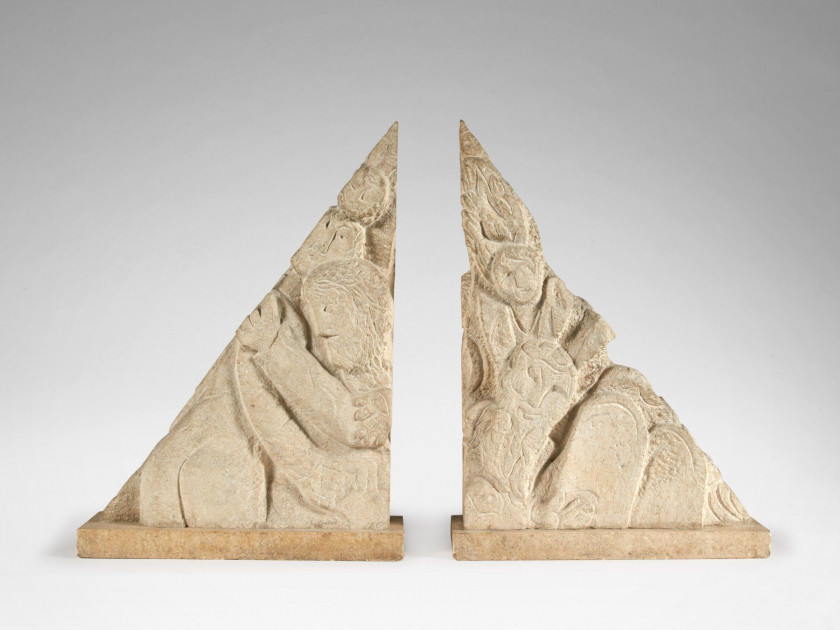