Lynn Bogue Hunt (American, 1878-1960) "Black Ducks, Descent at Dusk" oil on board laid on wood, four-panel screen signed lower right panel. Framed. each panel 68-1/4" x 16-5/8", overall 70-1/2" x 70-1/4" Provenance: Private collection, Maryland; Private collection, Georgia. Notes: Lynn Bogue Hunt was one of the most important and gifted sporting artists of the 20th century. He had an illustrious career as an illustrator, draftsman, painter, hunter and wildlife conservator. Born in Honeoye Falls, New York, Hunt grew up in Albion, Michigan. Aside from preliminary art instruction at Albion College, Hunt was largely self-taught. An assiduous gamesman, his patience and keen observation of both live and mounted examples made him an accomplished waterfowl and fish specialist. Hunt launched his career in 1897 after Sports Afield published a story he wrote and illustrated on ruffed grouse. Over the next 40 years, he was the definitive figurehead of sporting art in America. He produced 106 covers of Sports Afield and Field & Stream, illustrated more than 40 books, created 250 cover paintings for 40 different periodicals, and executed hundreds of paintings and murals for corporations and private clients that included Ernest Hemingway, a fellow hunting and fishing companion. Hunt was also one of the early proponents of "catch-and-release game fishing" and supported Ducks Unlimited's habitat restoration. According to David E. Petzal, the longtime editor of Field & Stream, "Of all our cover artists, the most famous and arguably the most successful was Lynn Bogue Hunt .. His subjects were simply more real. How do you paint something alive? You paint life. That's what Hunt did. He painted life." Petzal's pithy summation captures the power of Hunt's work. His extraordinary ability to rein in the complexity of an animal and a hunt to its most salient movement and setting, executed through strong lines and bold colors. This rare screen, the only one known of its kind, is a tour-de-force example of Hunt's command of fauna and flora. The rare black ducks, coveted by hunters every season, are captured in an arc of flight in an orb of gold silhouetted against the marsh and cattails - their bills and wing coverts crisply delineated in the waning evening light. Ethereally lit from behind, they fall from the skies like celestial beings from the heavens. References: Shelly, Kevin. Lynn Bogue Hunt A Sporting Life. Lanham: Derrydale Press, 2003; Davis, Tom. "Lynn Bogue Hunt: Angler, Hunter, Artist." Sporting Classic Daily. 13 June 2018. Web. 21 Sept. 2018. 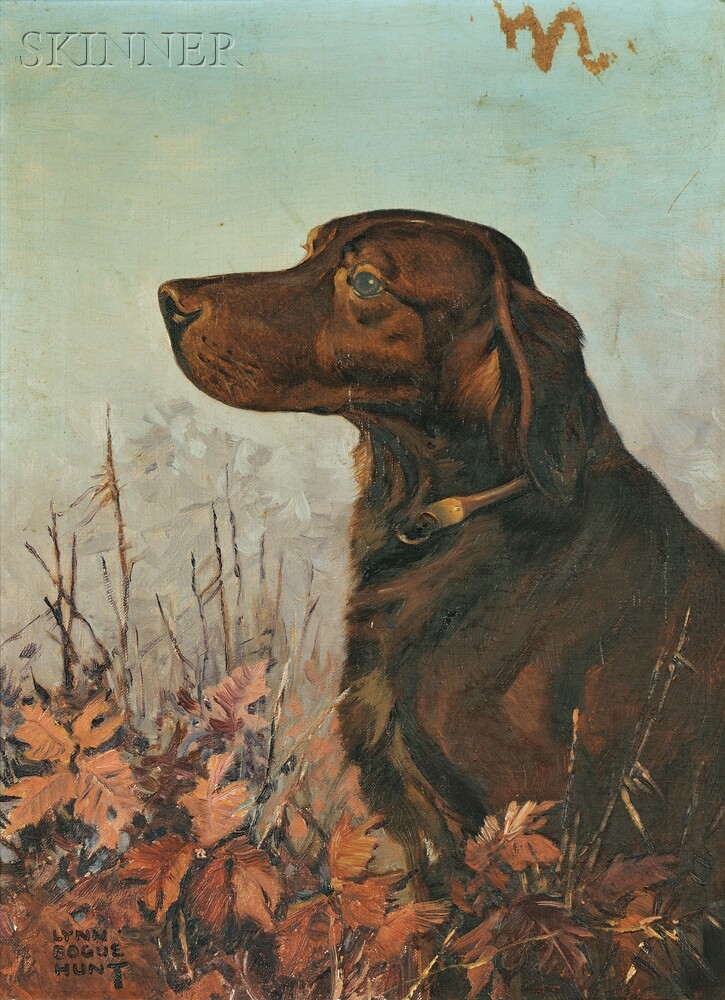 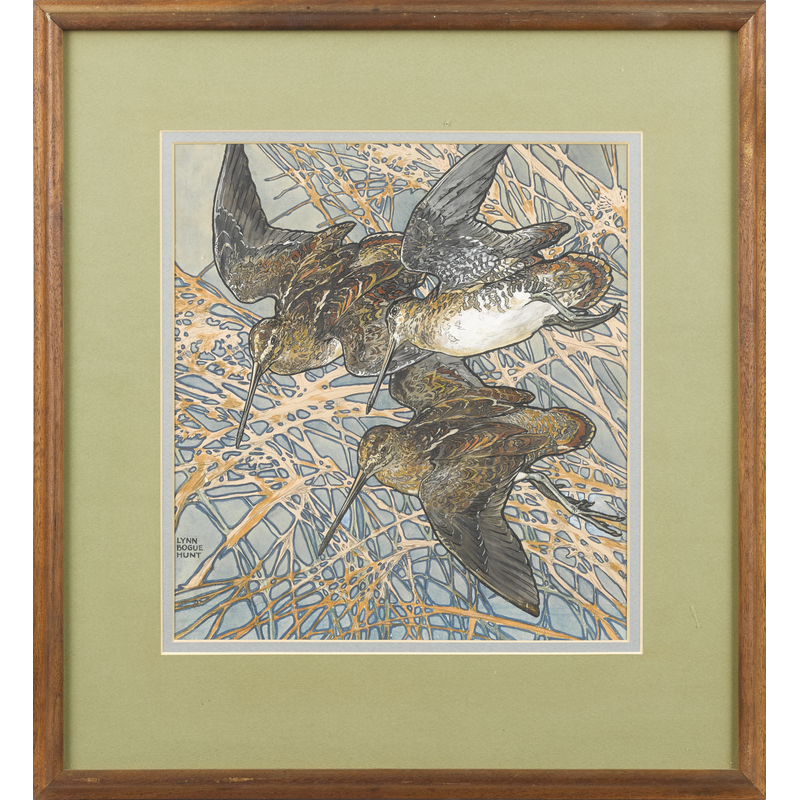 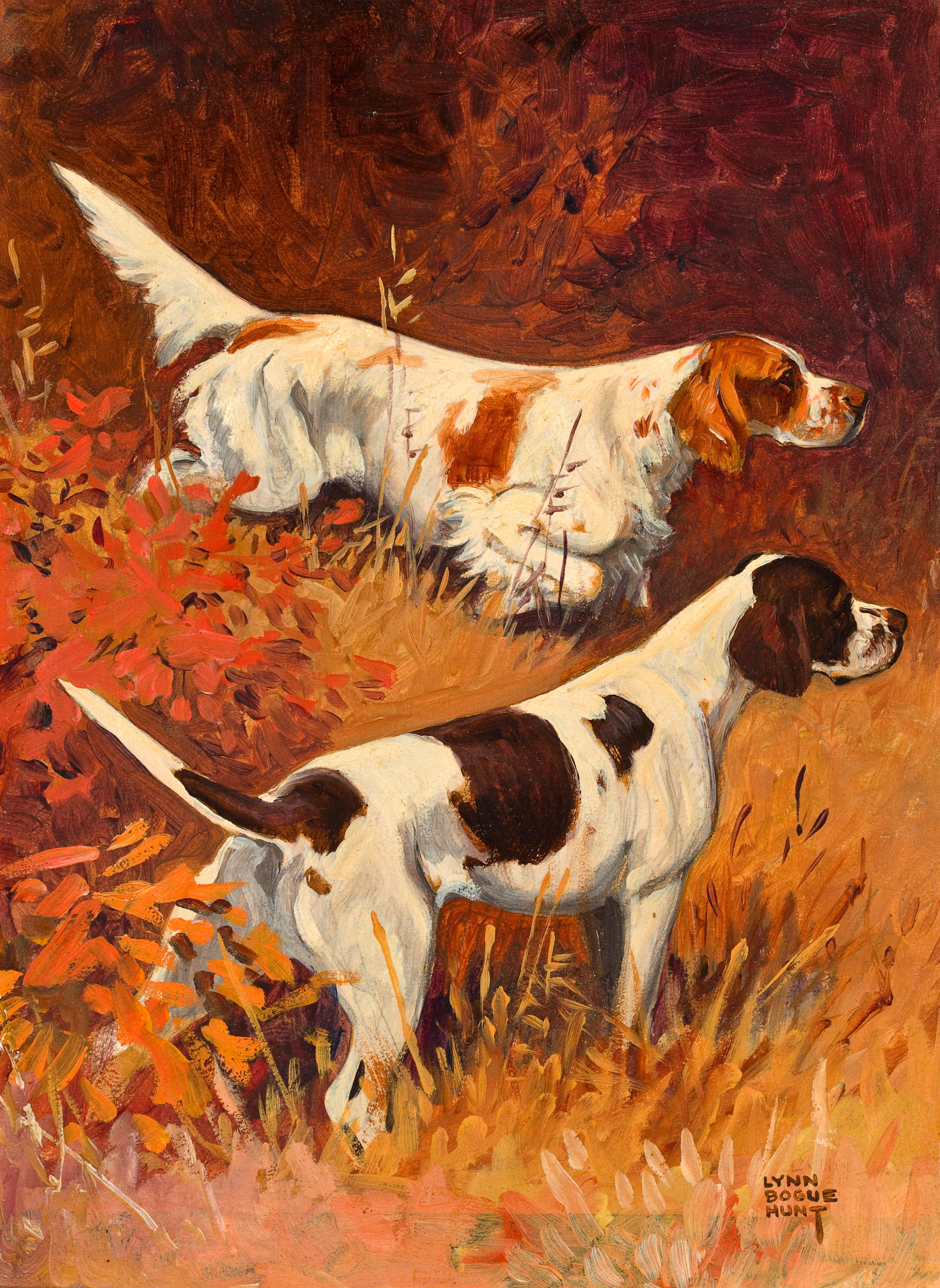 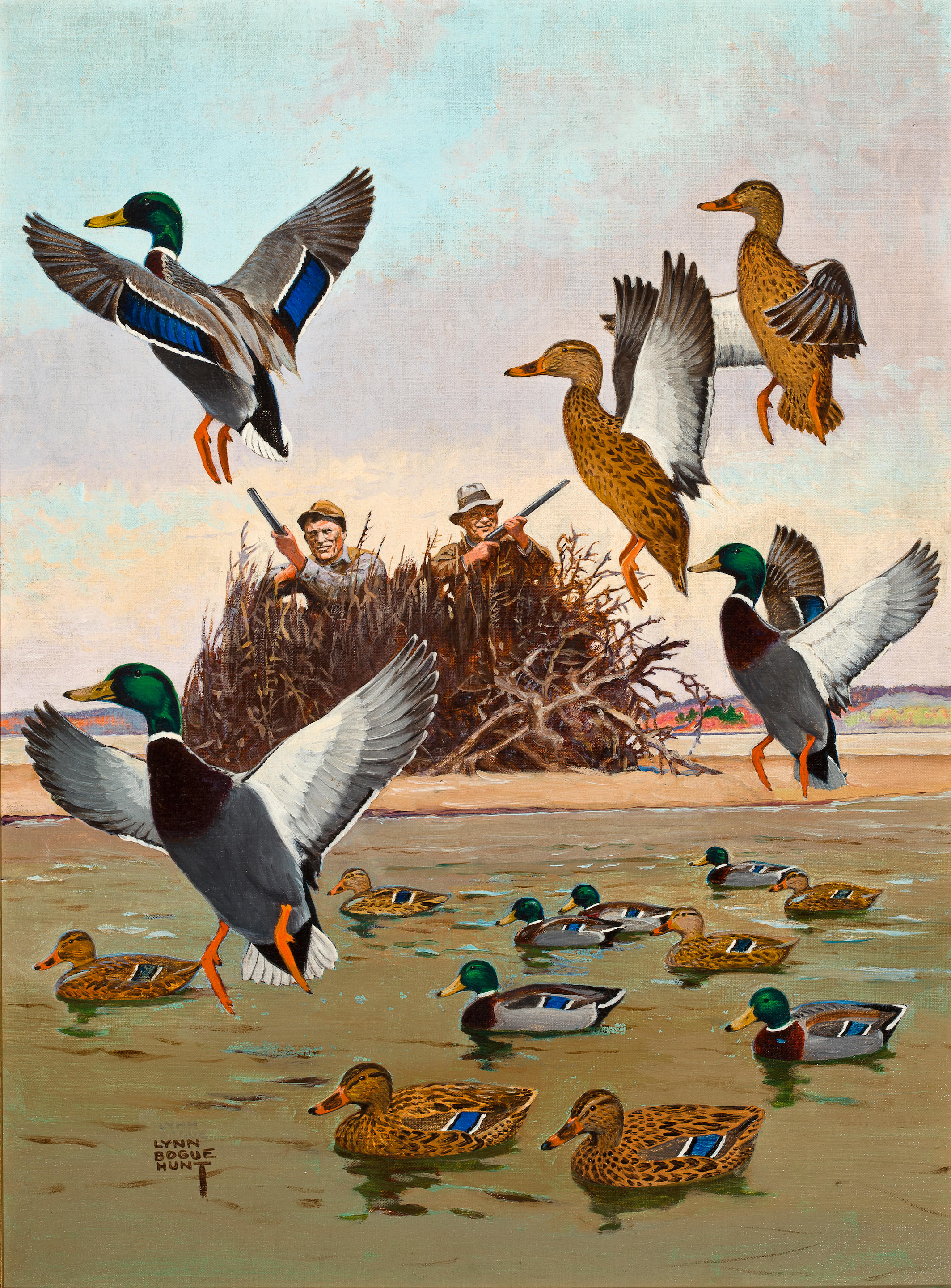 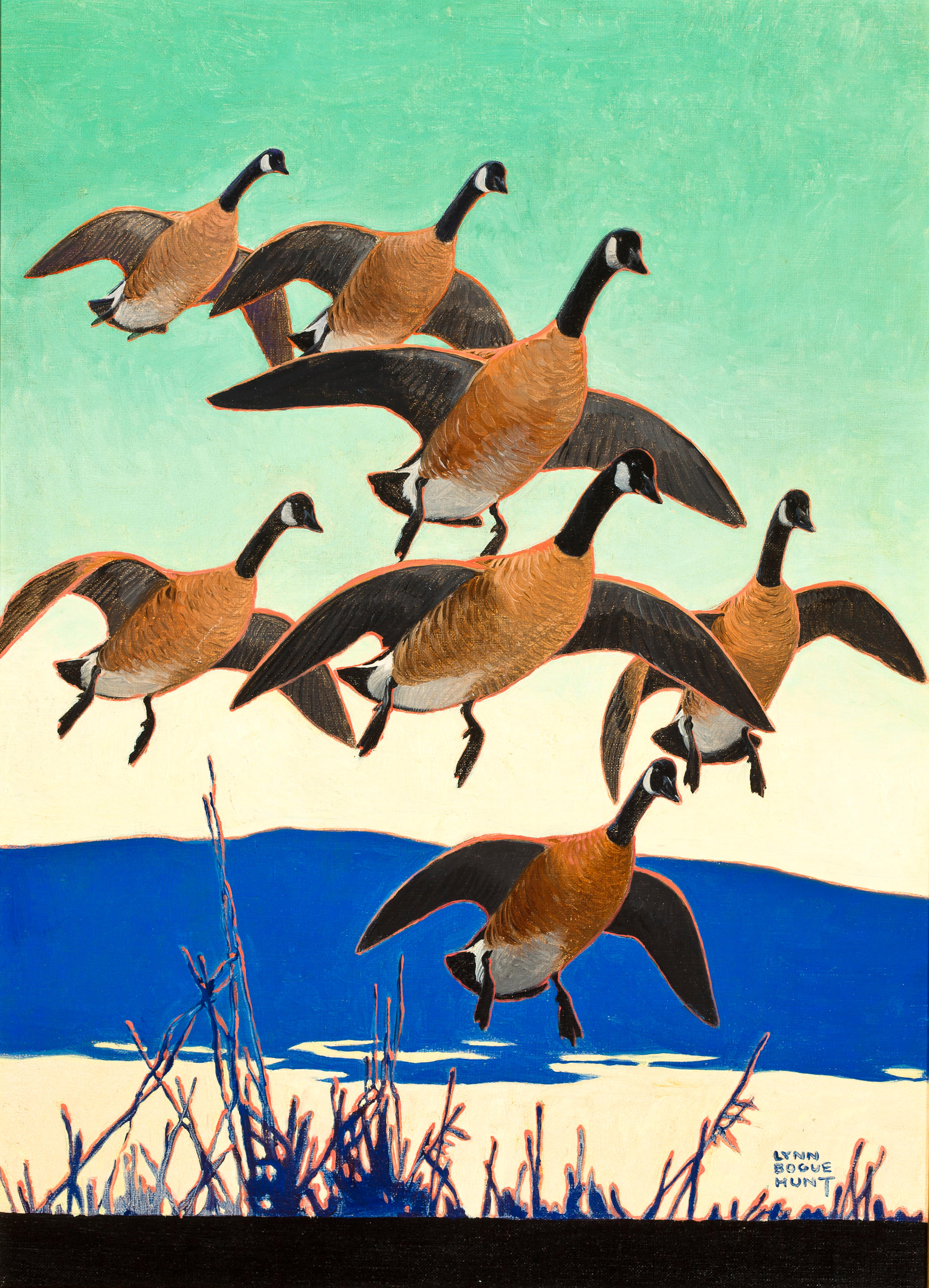 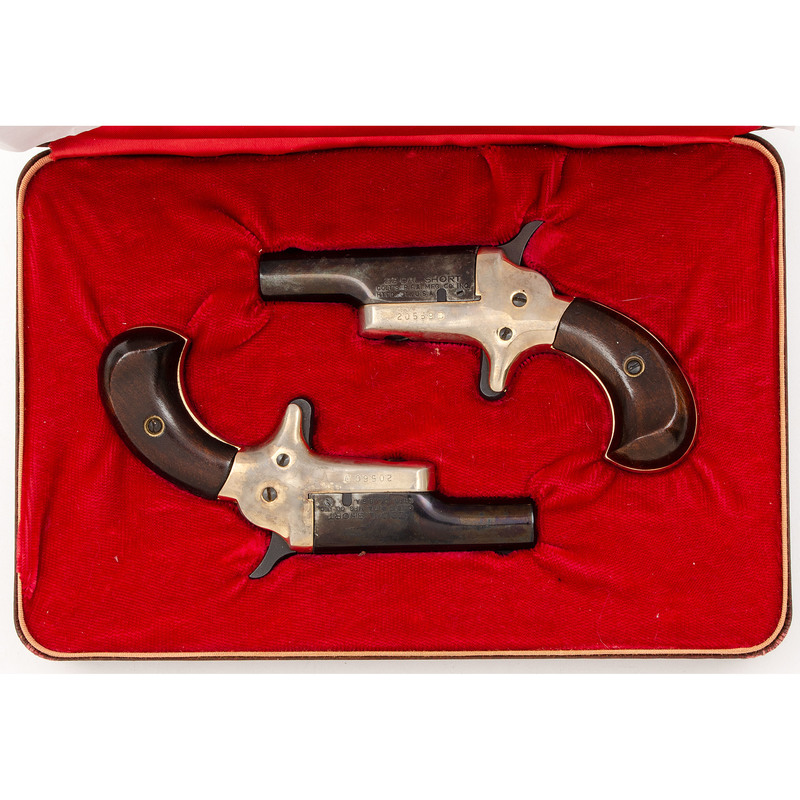 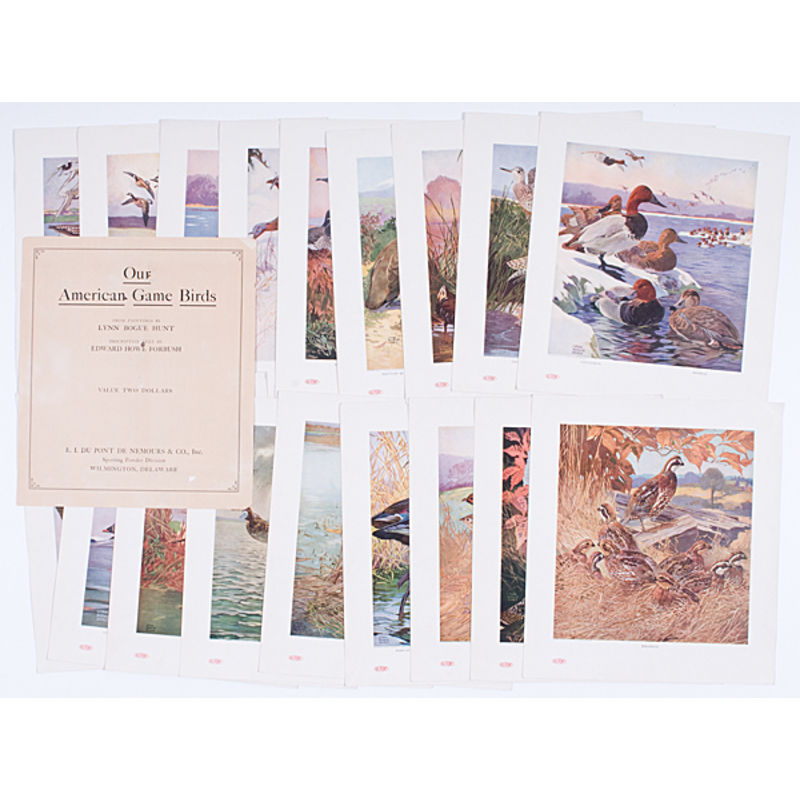 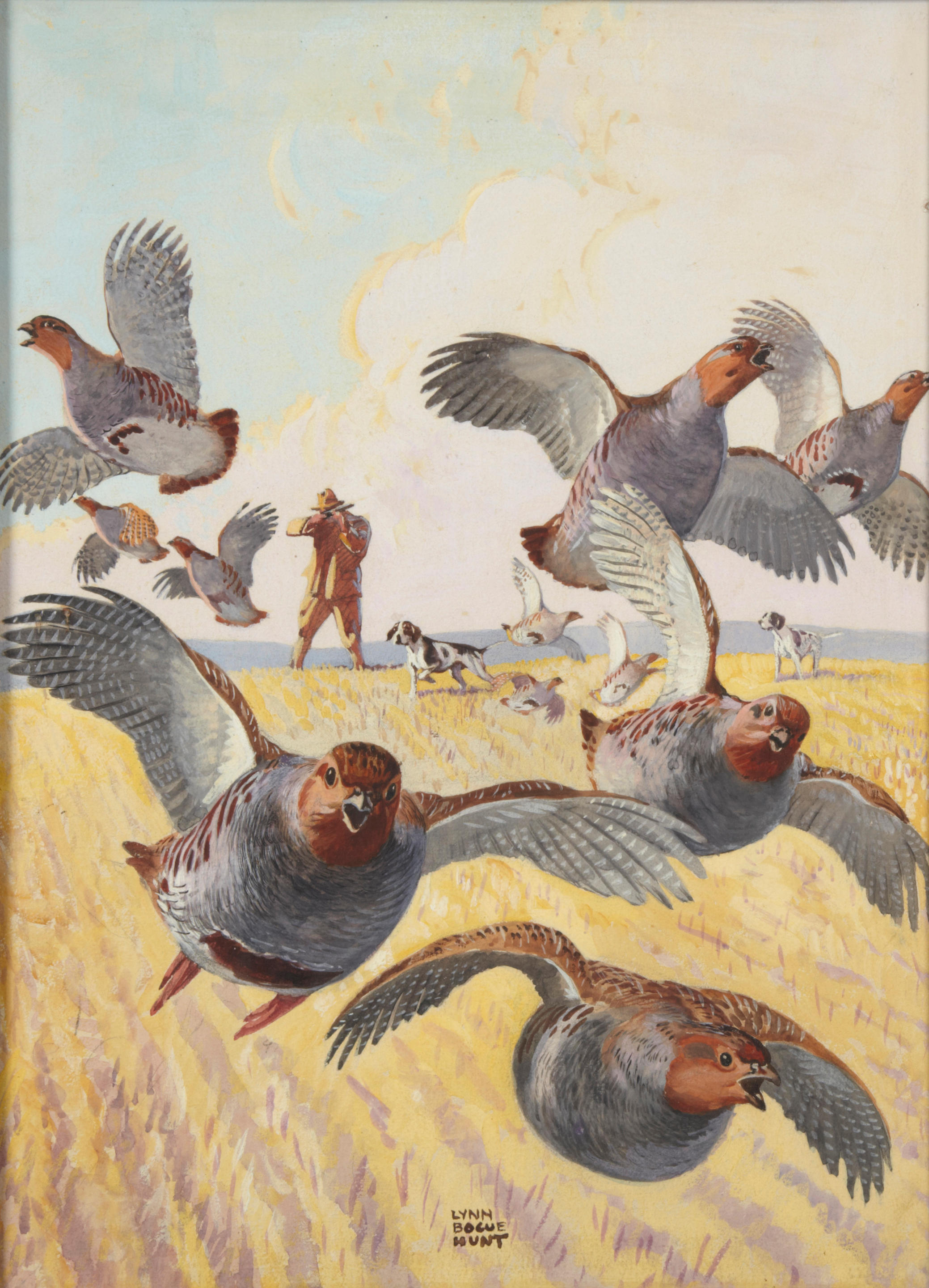