Title: Les Trois Mousquetaires Author: Dumas, Alexandre, pere Place: Bruxelles et Leipzig Publisher: C. Muquardt Date: 1844 Description: 5 volumes in 2. 181, [1], 172, 171, [1]; 163, [1], 223 pp. 5¼x3½, period (original?) quarter leather and mottled boards, spines lettered in gilt. Rare pirated edition of Les Trois Mousquetaires [The Three Musketeers], printed from the original serial appearances in Le Siècle, which evidence strongly suggests pre-dates the regularly published first edition put out by Baudry in 1844. The original publication of Mousquetaires was in serial form, in the Parisian Daily Le Siècle, from March 14 to July 14, 1844. Its popularity soon eclipsed all of Dumas' previous romances, and as Dumas bibliographer Frank Wild Reed notes in his article for The Colophon New Series, Vol. III, No. 3, Summer 1938 ("Dumas Revises `The Three Musketeers'"), "Almost with every day excitement and enthusiasm grew; soon this intriguing story was the principal topic of conversation, completely submerging even the news of the brief war in Morocco." Further, he notes that "Issue by issue of Le Siècle was hastily acquired by the piratical publishers of Brussels, and as quickly the portion of Les Trois Mousquetaires which it contained was set up by them in type; then, as sufficient to form a volume accumulated, this was given to the public. Though these copies were `interdicted for France,' being small and unobtrusive many found their way across the frontiers." Thus the several piracies from Brussels publishers contained the original text (with perhaps a few typographical mishaps) as issued in the newspaper appearances. The 1844 Baudry edition, however, had revisions made by Dumas. Though usually Dumas avoided revisiting his romances once they had left his hand, in this case he wrote to the publisher who had been awarded the publication rights, "My dear Baudry, It is you who have bought the Musketeers. I should very much like to revise the proofs in a body. They have perpetrated some errors which it is important for you and for me to cause to disappear..." Frank Reed extensively analyzes the differences between the Belgium editions and those of Baudry and Calmann Lévy, who reprinted the Baudry text, and notes that most of the early translations were made from the Belgium editions, which were considerably less expensive than the authorized French edition. He also notes that, in many instances, Dumas' revisions were not necessarily improvements on the original. Given the time frame, the fairly extensive revising of the Baudry text by Dumas seems inevitably to have caused a delay in publication not encountered by the hasty Belgium publishers, and this rare 1844 issue of Les Trois Mousquetaires by Muqurdt, of which there is no locatable bibliographic information (Reed refers to several Belgium publishers but not this one), would seem certainly to predate the Baudry edition, and quite possibly the other Belgium piracies as well. A truly significant issue of what Reed calls “one of the world’s essential works of fiction.” Lot Amendments Condition: Leather scuffed, front joint of second volume starting; old ink ownership signatures on front free endpapers, a very nice copy, internally quite clean and fresh. Item number: 158701 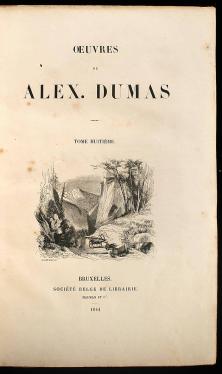 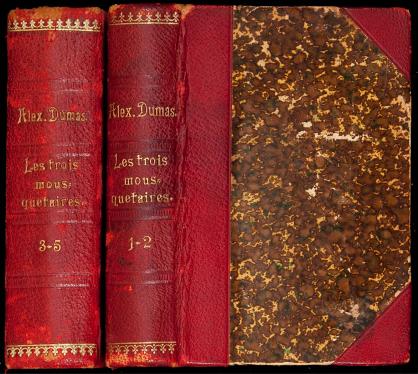