PROPERTY FROM A PRIVATE JAPANESE COLLECTION LÉONARD TSUGUHARU FOUJITA (1886-1968) Nu aux mains croisées signed and dated in Japanese, and further signed and dated 'Foujita 1924' (lower left); signed, inscribed and dated in Japanese and further signed, inscribed and dated 'Paris 1924 Foujita' (on the stretcher) oil on canvas 81.2 x 65.5cm (31 15/16 x 25 13/16in). Painted in Paris in 1924 Fußnoten The authenticity of this work has kindly been confirmed by Madame Sylvie Buisson. Provenance Galerie Nichido, Paris & Tokyo. Private collection, Japan (acquired from the above in the early 1970s). Exhibited Tokyo, Galerie Nichido, Gloires de l'art francais, 10 – 23 August 1971, no. 46. Literature S. Buisson, Léonard-Tsuguharu Foujita, Vol. II, Paris, 2001, no. 24.104 (illustrated p. 198). Nu aux mains croisées was painted at a time of great personal change and artistic success for Foujita, who by 1924 was enjoying both a new romantic relationship and great critical acclaim. Born in Tokyo, he had studied at the National University of Fine Arts and Music where he combined the Western medium of oil paint with Japanese ink techniques, anticipating his unique style in even these earliest works. He left for Paris at the age of 27 and quickly befriended artists such as Amedeo Modigliani Chaïm Soutine Fernand Léger Pablo Picasso and Henri Matisse Foujita embraced the heady bohemian lifestyle of Montparnasse in the 1920s and by the time the present work was painted, was already a celebrated figure of the École de Paris. One of the few artists of this school to have achieved commercial success in his lifetime, Foujita's distinctive style was met with praise from the outset: in 1917 he exhibited 110 watercolours at the Galerie Chéron in Paris in his first solo show, all of which sold. These works on paper maintained the feel of Japanese woodcuts but depicted the Parisian café scene around him in a blending of East and West. Foujita's 1922 painting Nu couché à la toile de Jouy was one of his first to use a live model and was shown in the Salone D'Autumne to huge success, and by 1925 he had received the French Legion of Honor. Nu aux mains croisées stands testament to Foujita's harmony of Eastern technique and Western subject. The languorous outlines of the nude in the present work are delicate yet bold, reminiscent of the traditional Japanese sumi-e (ink brush painting) technique. Foujita's exemplary draughtsmanship is evident in the highly-detailed rendering of the model's wavy hair and the few economical lines with which he captures the curves of her ear and lips. The nude's creamy luminescent skin shines out against the more muted background, formed by a technique Foujita named nyuhakushoku (chalk white, or literally 'whiteness of milk'). The artist would gently layer a specific white ground (the exact specification of which he never revealed) to capture his model's white skin and then contrast this with black outlines applied with menso - the finest brushes used by traditional Japanese painters. The radiance of the sitter's skin is only heightened by the small gap or border Foujita leaves around the edge of the whole figure, particularly evident around her hair, in an echo of a Renaissance halo. The only colours in Nu aux mains croisées are the delicate shell pink of the model's lips, nails and nipples, the rich chestnut of her hair and the soft silvery shadows which look to the stump technique used in Foujita's works on paper. This almost monochrome treatment of the nude find its parallel in Foujita's Japanese contemporaries, notably the nudes of Hashiguchi Goyō Goyō used similar delicate washes of ink to paint nudes such as his 1920 Woman after a Bath [Portrait of Kodaira Tomi]. The model's white skin becomes an almost negative, abstract space in both artists' compositions. The viewpoint of the present work is somewhat ambiguous – the pose and crumpled bed sheet behind the model indicate she is lying in repose, but the portrait orientat 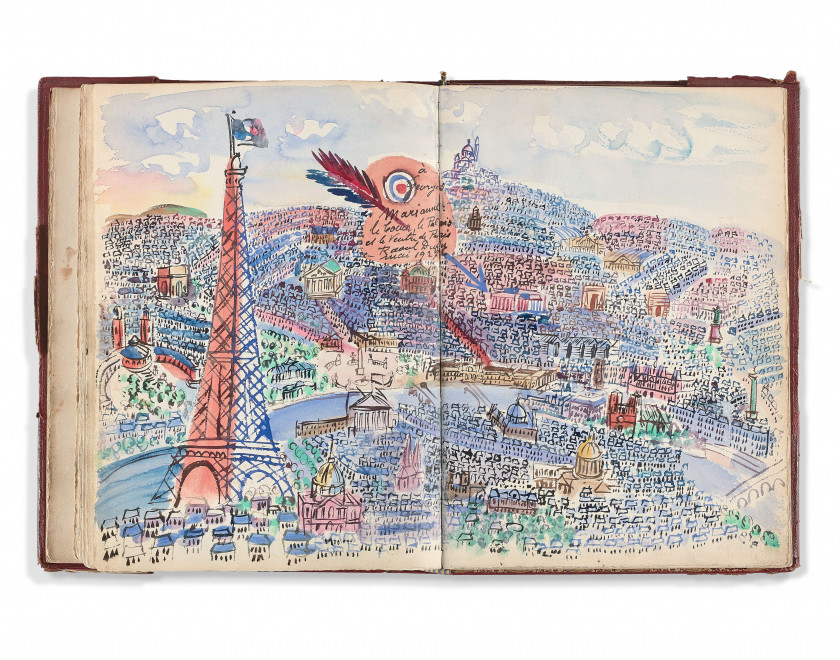 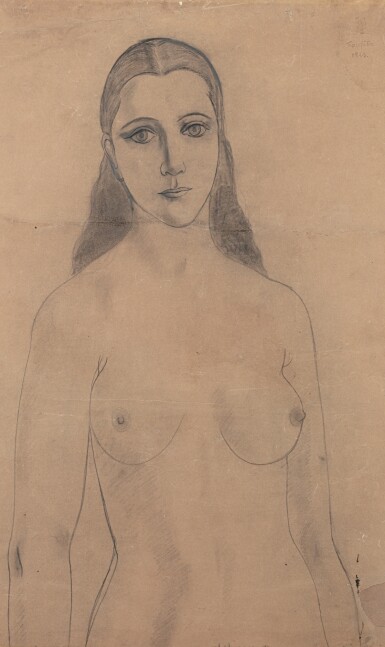 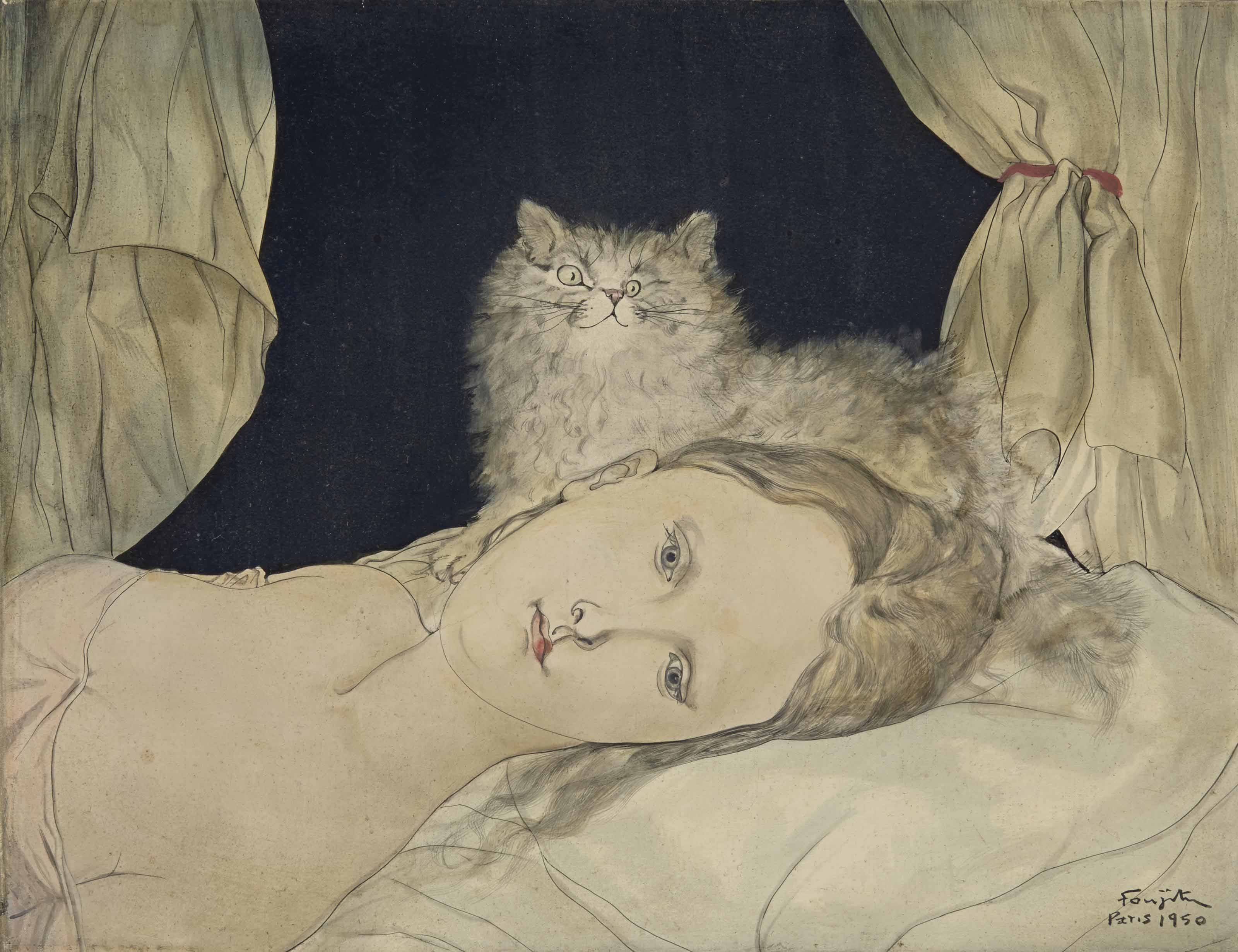 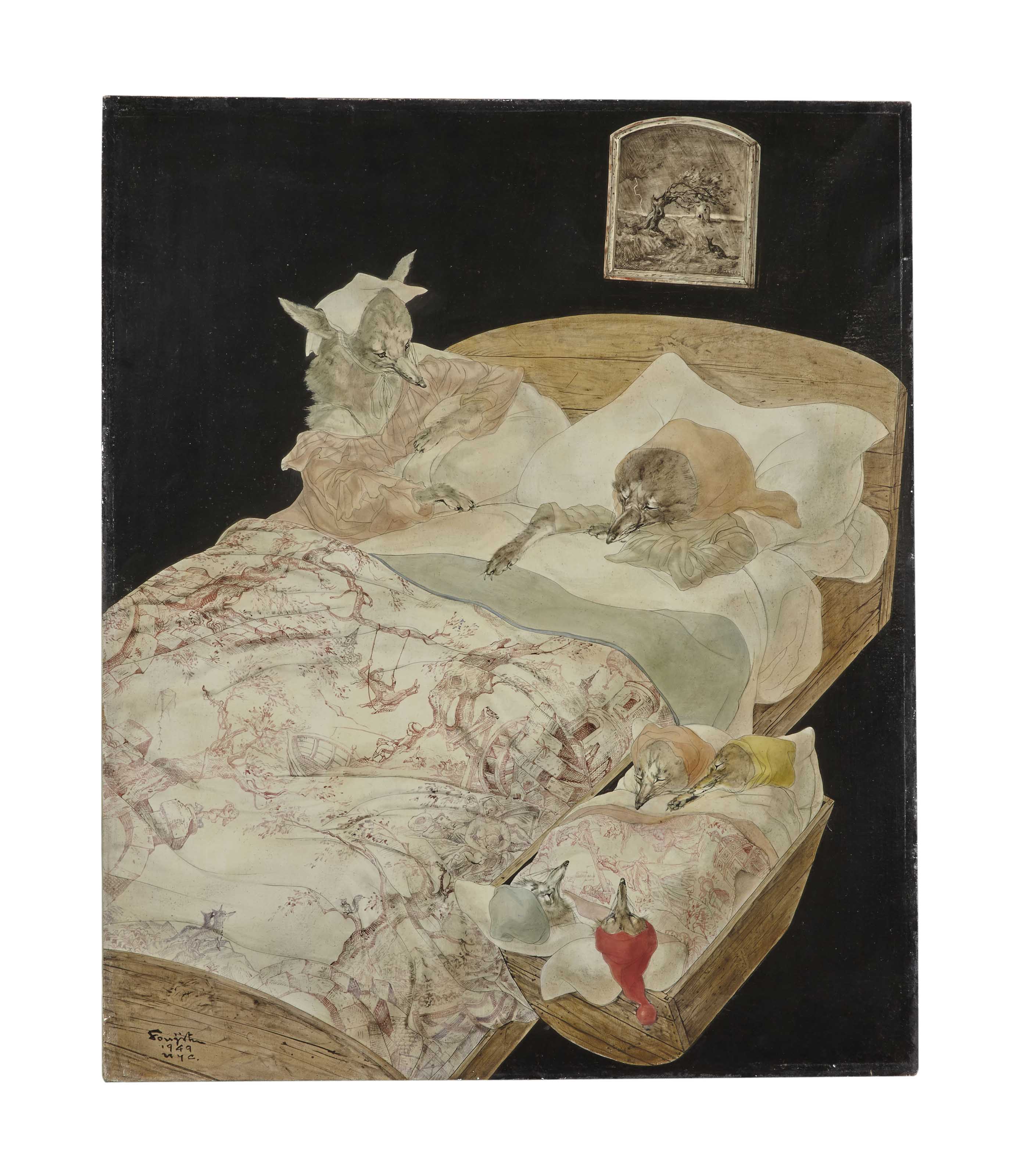 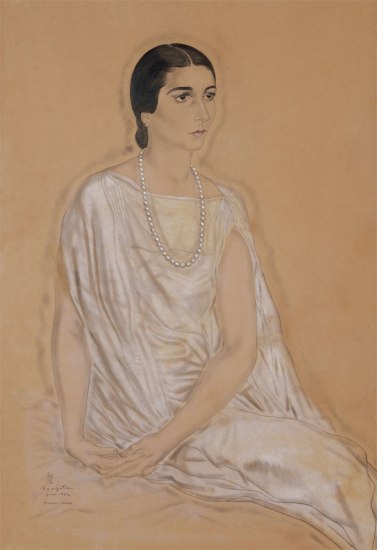