Large decorated initial from a manuscript Antiphoner, repaired with sections from a late twelfth-century Missal, both on parchment [northern Italy (probably Bologna), late thirteenth century] Single leaf, with large initial E (96 by 79mm., opening Ecce vicit Leo …, a responsory for the Second Procession at Easter) in finely scalloped blue bars shaded with gold and heightened with white penwork, enclosing symmetrical sprays of blue acanthus leaves on pink, red, and pale brown grounds, a coloured knot at the head and foot of the initials body, simple initials in red or blue with contrasting penwork, capitals touched in red, rubrics in red, 7 lines of early gothic bookhand with music on a 4-line red stave (rastrum 28mm.), torn area of bottom of leaf supported with cutting from a twelfth-century Missal (260 by 90mm.), most probably from central Italy and early twelfth century (cf. the similar initials in the group of mss in Avril and Zaluska, Manuscrits Enlumines dorigine italienne I, 1980, nos.60-63, 66 and 72, all from central Italy and ranging in date from the late eleventh to the first decades of the twelfth century; and Berg, Studies in Tuscan Twelfth Century Illumination, 1968, no.133, pl. 380, Pistoia and second quarter of twelfth century) with remains of 3 columns of text (from 2 leaves), 10 lines, with capitals touched in yellow and the top of a large initial I in yellow with a geometric interlace top and red and green grounds, eighteenth-century Biblical reference and folio no. 51, some small spots, reverse with heavy grain-pattern and hence somewhat dark, overall good, 470 by 340mm. Once owned by Bernard Rosenthal, and with his stock no. BMR Misc 6a in pencil.

Very large leaf from an Antiphoner, with

Very large leaf from an Antiphoner, with 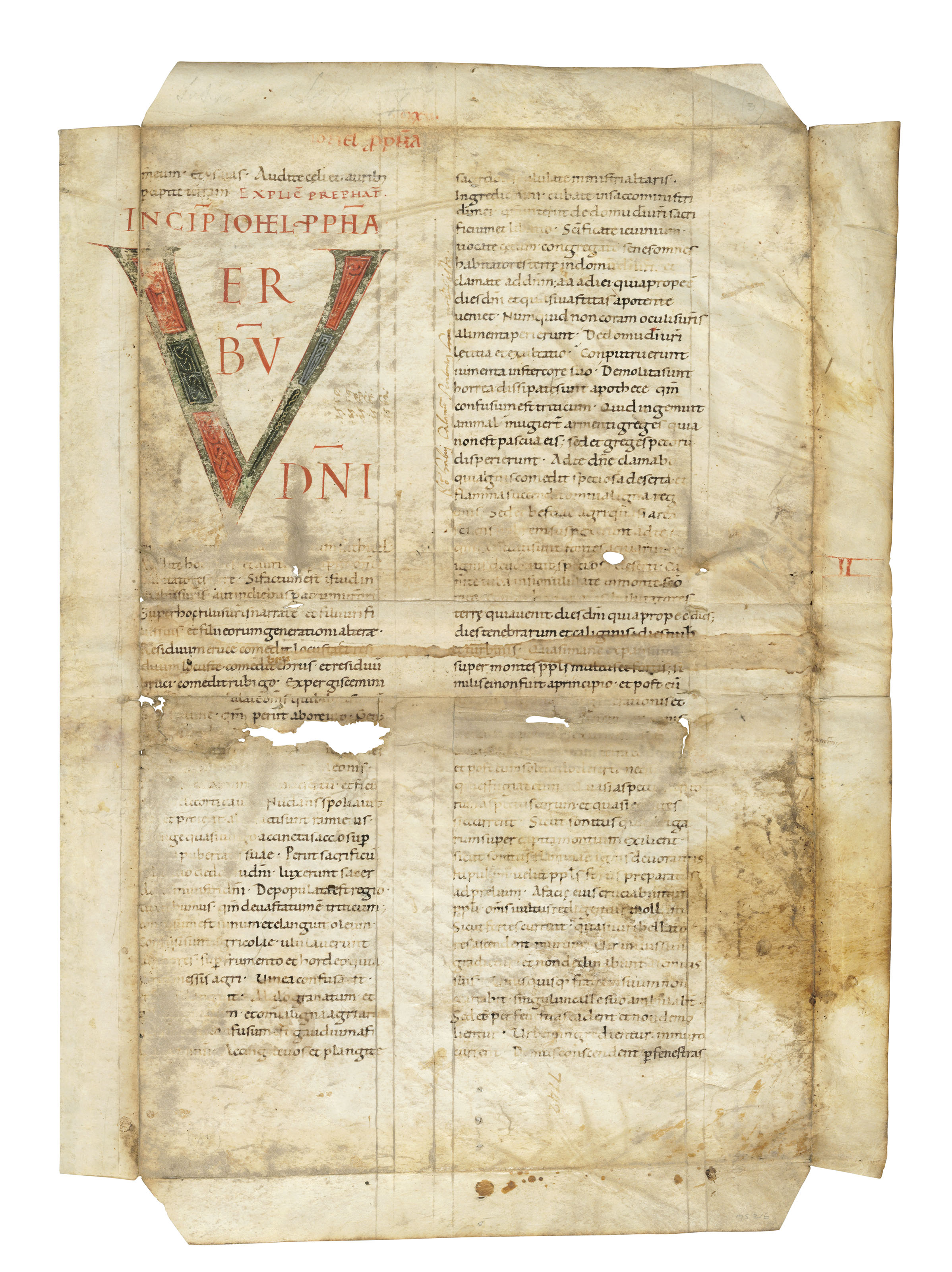 BIBLE, a large decorated initial on a le 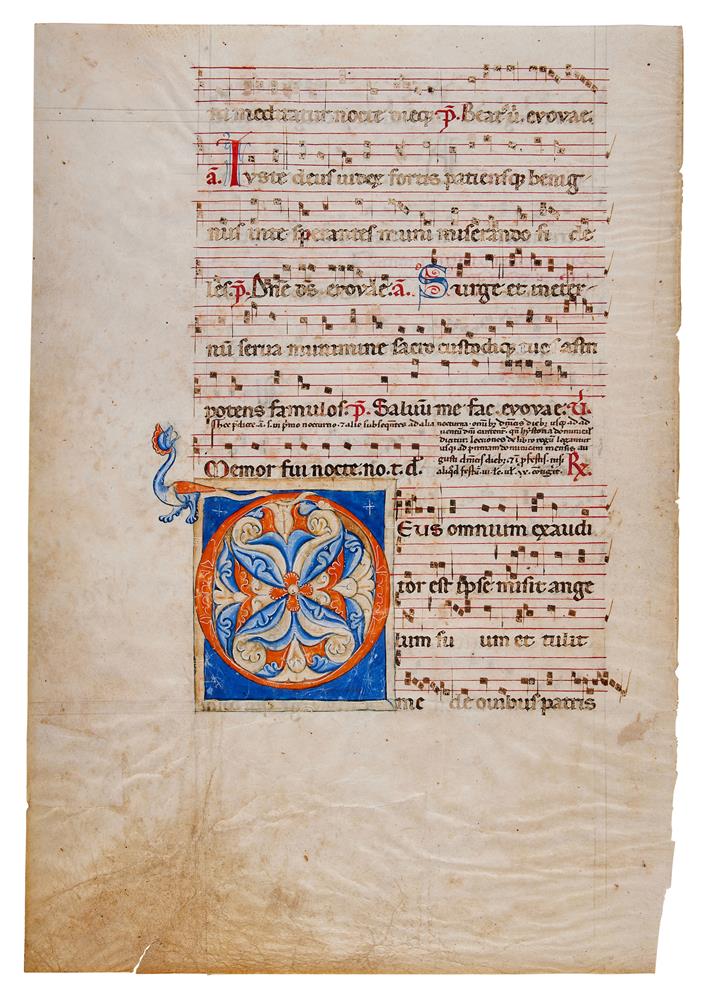 Leaf from an early Choirbook, with a lar

A historiated and a decorated initial fr 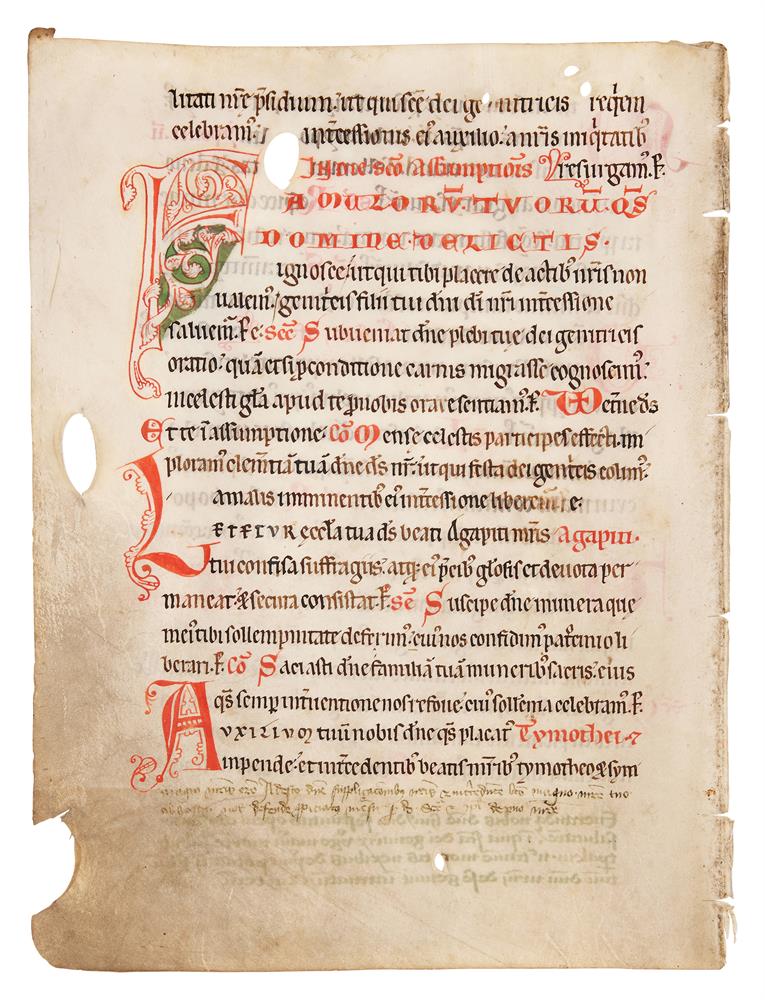 Leaf from a Sacramentary, with a large d

Large decorated initial, on a leaf from

The Resurrection of Christ, a large hist 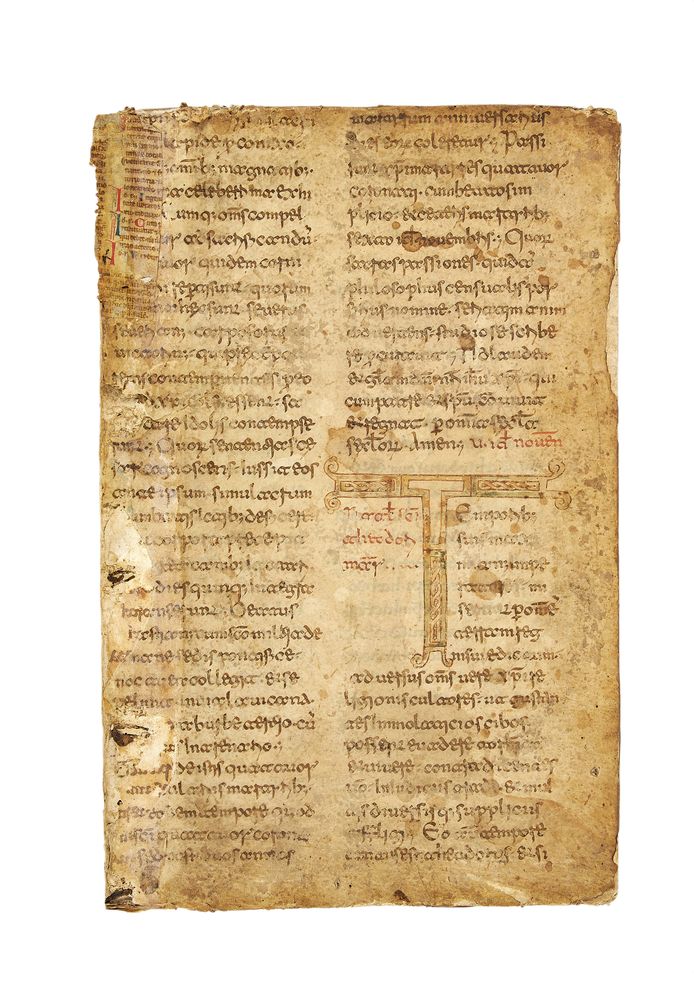 Leaf from a very large copy of the Acta

The Genesis page from a monumental illum

Bifolium with a large white-vine initial