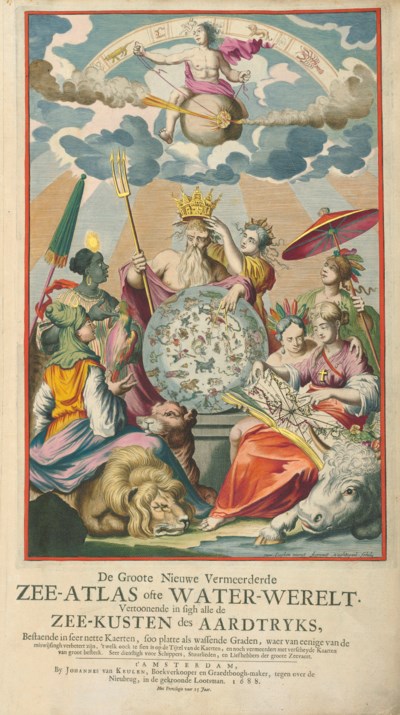 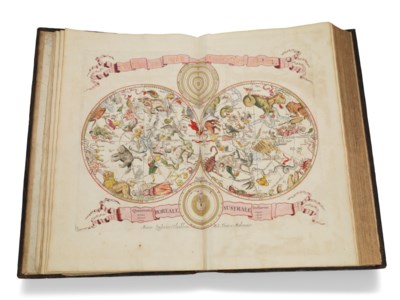 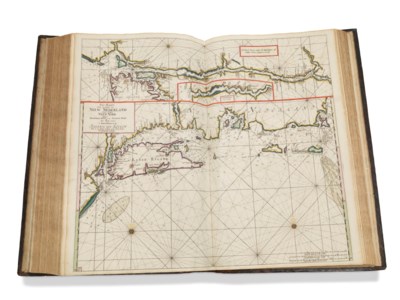 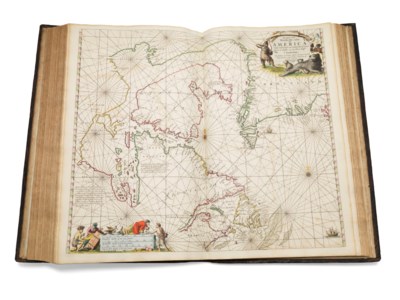 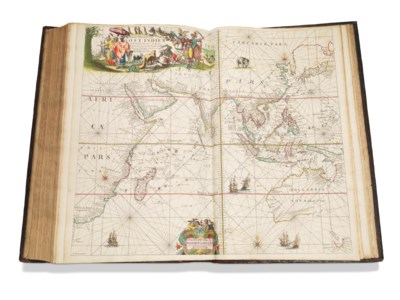 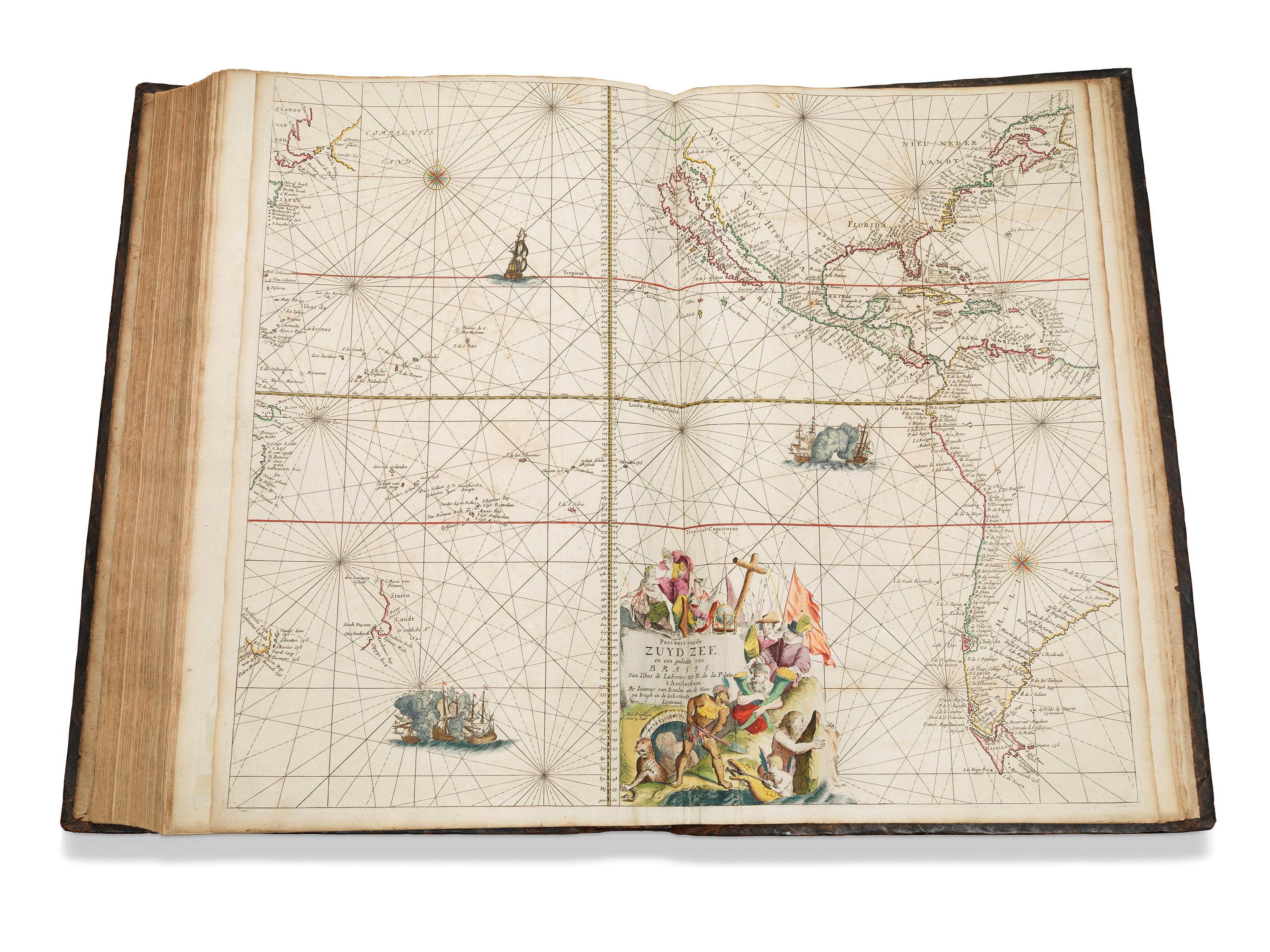 KEULEN, Johannes van (1654-1715). De Groote Nieuwe Vermeerderde Zee-Atlas ofte Water-Werelt. Amsterdam: Johannes van Keulen, 1688. A hand-coloured maritime atlas of unprecedented scope and splendour. The charts after Claes Janszoon Voght combine baroque artistry with a technical ability that resulted in a half century of steady publication for the atlas from 1680 to 1734. Voght also wrote the short text. As Koeman stresses, the atlas was different to its predecessors in going through a process of continual enlargement and in having a content that was so variable. Whereas earlier Dutch maritime atlases had a stable content with scarcely any alteration or additions to the plates, however great their longevity, the Zee-Atlas was selective with fluctuations in the number of plates (a fact which would explain the absence of a register or index in the issues after 1681). This copy has an extraordinarily large complement of maps. The 1680 first edition contained only 36 charts; the Wardington copy of 1682 contained 41. As work on van Keulen’s pilot book, the Zee-Fakel , proceeded, so more charts became available; obsolete charts were also replaced by new engraved plates with different numbers. Koeman records two copies of a Dutch language issue of 1688 with 72 charts [Keu 16]; yet he also refers to another issue of the same date with the much bigger total of 151 charts [Keu 17]. Our copy contains 135 charts, beginning with the celestial chart after Ludovico Vlasbom, and the world map by Carel Allard [Shirley 517]. The plate total includes 65 of the 72 charts listed under Keu 16. The additional 70 charts give this copy of the atlas a truly global coverage, starting with the coastlines of the Mediterranean, then moving to the West Indies and the Americas – with individual charts of Florida, Carolina, New England, New Netherlands, New Foundland, the north east coast of America and Greenland [Burden 515]. There are 11 maps of Brazilian and 15 of African coasts. The atlas ends with van Keulen’s famous chart of the ‘Oost Indien’, then Ceylon, his magnificent map of the South Pacific [Burden 518], and finally Asia. Arguably the greatest 17th-century Dutch sea-atlas, handsomely-engraved and beautifully hand-coloured. Cf. Koeman IV, pp.280-281, Keu 16 & 17. Folio (535 x 314mm). Hand-coloured engraved frontispiece by Aernout Naghtegael after Jan Luyken, 6ll. text, double-page celestial chart after L. Vlasbom, double-page world map after C. Allard, and 133 numbered double-page engraved charts after Voght, all with the finest contemporary hand-colouring, heightened in gold (frontispiece with corner crease, some offsetting to charts, occasional creasing near gutter, occasional tiny repairs to folds). Contemporary Dutch calf gilt with central armillary sphere within an arabesque, spine gilt, uncut (rebacked, old spine relaid, joints lightly rubbed, gilt faded, front free endpapers creased). 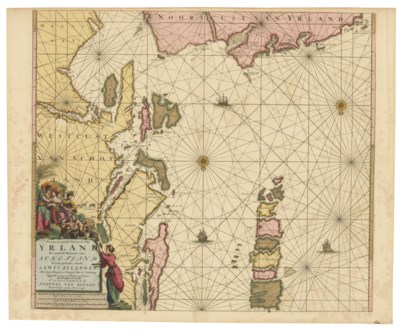 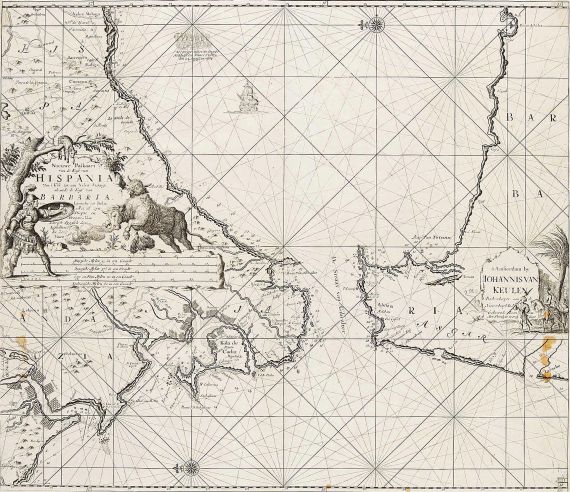 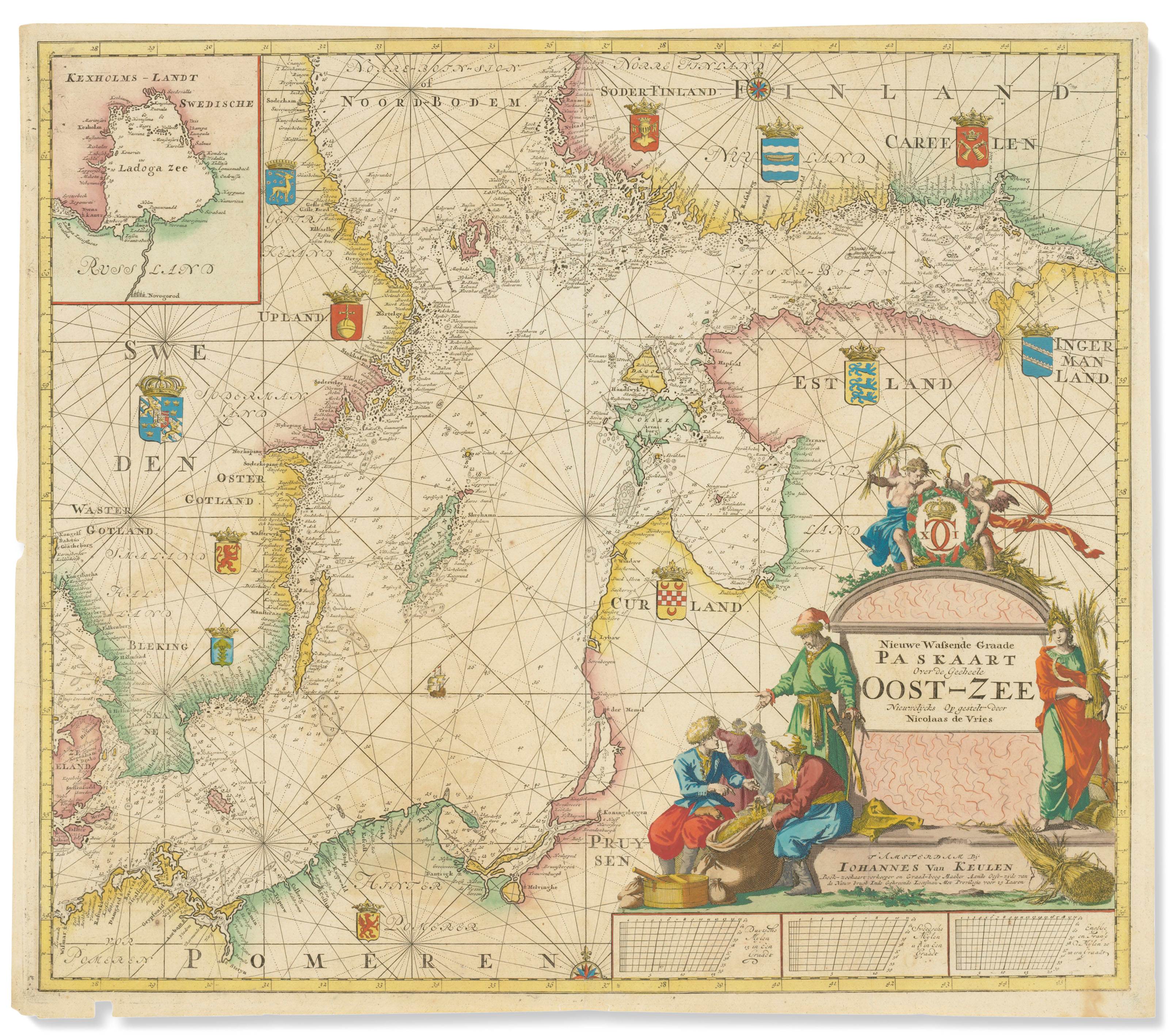 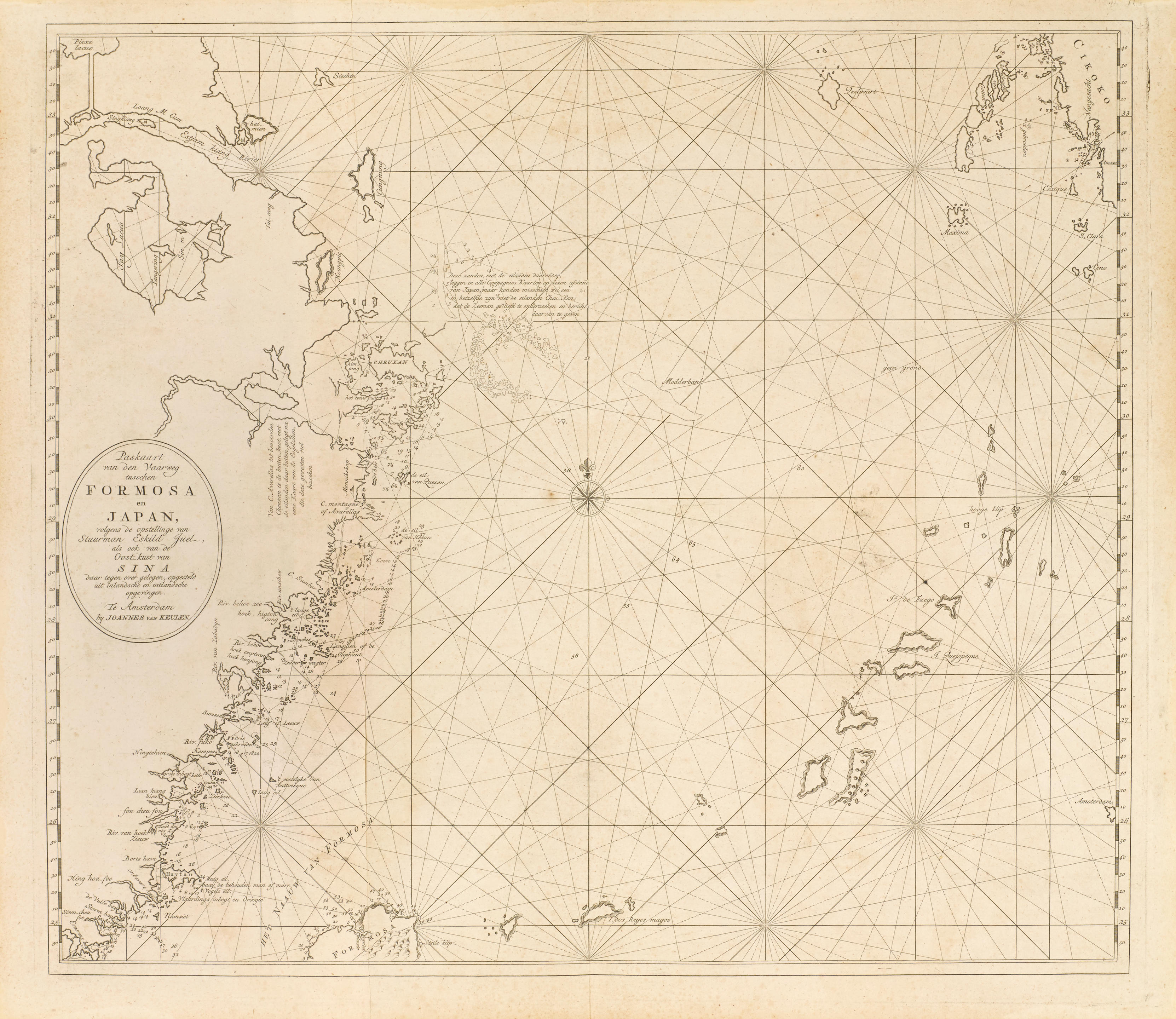 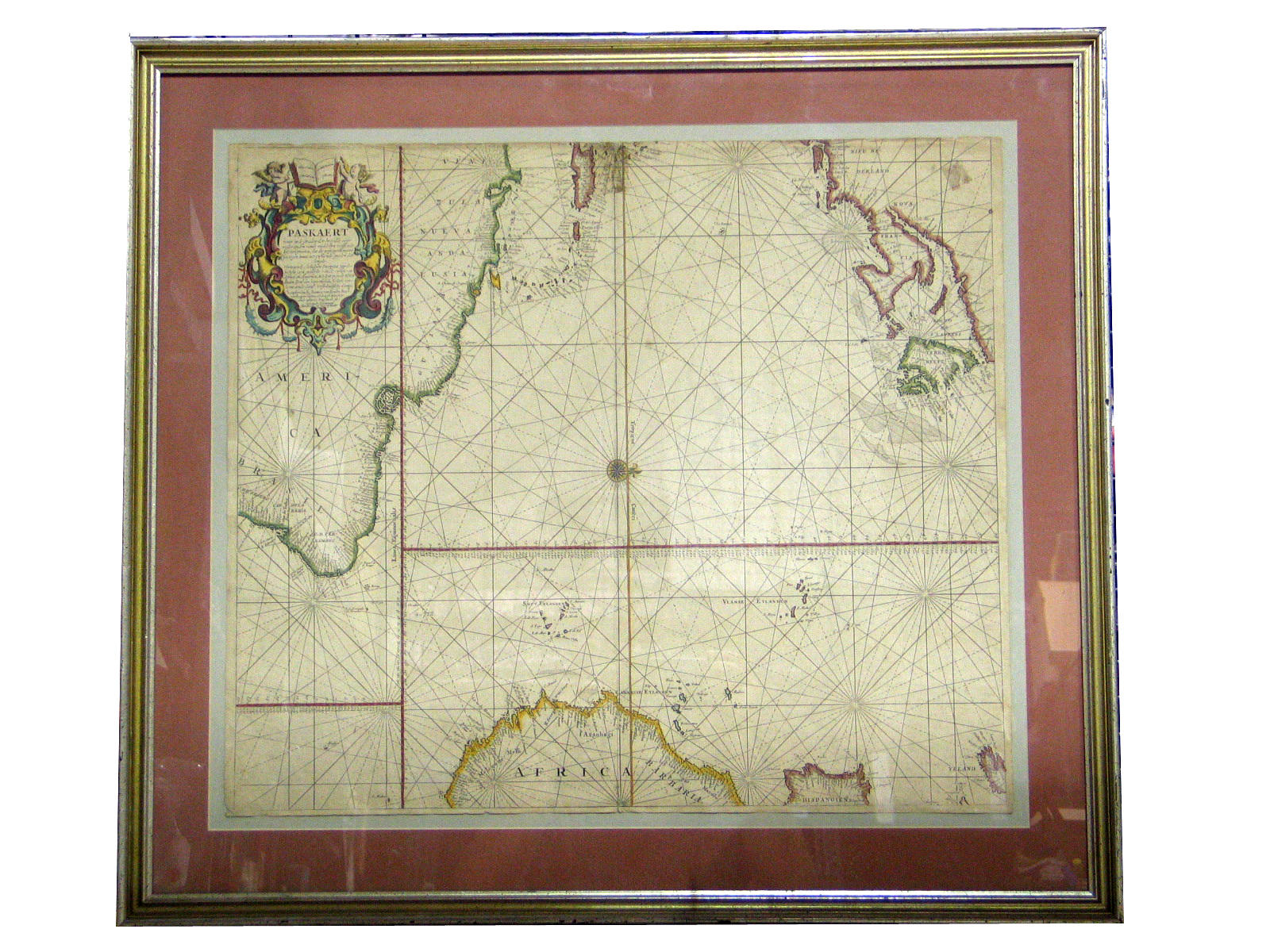