John La Farge (American, 1835-1910) Lot of Two Cliché-verre Glass Drawings for Robert Browning's Men and Women, 1860. Unsigned, one dated "1860" l.r. Graphite on frosted glass set between two plates of clear glass within a stained glass composition, sizes to 9 3/4 x 8 in., framed. Condition: Both with cracked frosted glass, one loose in frame. Provenance: Henry Lee Higginson, Boston, until d. 1919; by descent in the Higginson family. Literature: Passing references to both drawings are in three reviews of the 1879 exhibition/auction: "John La Farge's Sale," Boston Evening Transcript, 15 Dec. 1879, p. 4; "The La Farge Paintings," Boston Post, 17 Dec. 1879, p. 3; and "The Fine Arts: Mr. La Farge's Pictures," Boston Daily Advertiser, 18 Dec. 1879, p. 2. Exhibitions: Leonard's Gallery, Boston, The Drawings, Water-Colors, and Oil-Paintings by John La Farge. To be Sold at Auction, 18-19 Dec. [1879], exhibited under the heading "Drawings" as lots 33-3 and 33-6. N.B. The works were included in the late Henry A. La Farge's Catalogue Raisonne of the Works of John La Farge, and we wish to thank Dr. James L. Yarnall for updating and supplementing the information for inclusion in this catalogue entry. See online lot entry for extensive commentary by Dr. Yarnall on the works. There are several different techniques classified as cliché-verre, a French term usually applied to etching on a ground-coated transparent material. In this case, the term applies to drawing on a transparent glass surface and printing the resulting image on light-sensitive paper. La Farge prepared six cliché-verre illustration designs between 1859 to 1861 for a proposed Boston edition of Robert Browning's compilation of poems entitled Men and Women, first published in 1855. The intended publisher of the new edition was Henry Houghton, who late in the process asked La Farge to help underwrite publication costs. La Farge balked at this, discontinuing the plans, but he still produced proofs using six cliché-verre glass drawings that he had prepared before the project faltered. Of the original glass drawings, only one now in the collection of the Smithsonian American Art Museum (acc. no. 1966.1.1) had surfaced prior to 2010. La Farge originally sold six cliché-verre glass drawings as lot 33 in his one-man exhibition and auction held in Boston at Leonard's Gallery on December 18-19, 1879. That is where Henry Lee Higginson evidently purchased these two glass drawings, possibly along with others, and also with a number of oil paintings. In the 1879 auction catalogue, La Farge introduced the glass drawings with the note: "These drawings are on glass, and have been framed to hang in windows or against the light. They are the originals of a set of photographs already known to the public. They are all illustrations of Robert Browning's poems and are in several cases designed in the form of decorations." Lot 33 in the auction was in six parts. Part 3 was an illustration for Browning's poem Childe Roland to the Dark Tower Came. The poem, inspired by a line in Shakespeare's King Lear, recounts the nightmarish journey of Roland to the Dark Tower, a destination never reached in the poem. The journey takes Roland through a gloomy, evocative landscape filled with obstacles and threats. La Farge's glass drawing illustrated these lines from the poem: "A sudden little river crossed my path/ As unexpected as a serpent comes." Part 6 of lot 33 was an illustration for Browning's poem Fra Lippo Lippi. This dramatic monologue visualized an episode in the life of an actual historical figure: the Florentine monk, Fra Lippo Lippi (1406-1469), who was also a renowned painter. As depicted in the poem, Lippi had a taste for carousing, had been out all night, and was caught by some watchmen for Cosimo de Medici, the artist's patron. While being interrogated, Lippi recounted to the watchmen that his monastic life was one of hardship, forcing him to carry on secret liaisons with women. He also rambled ab 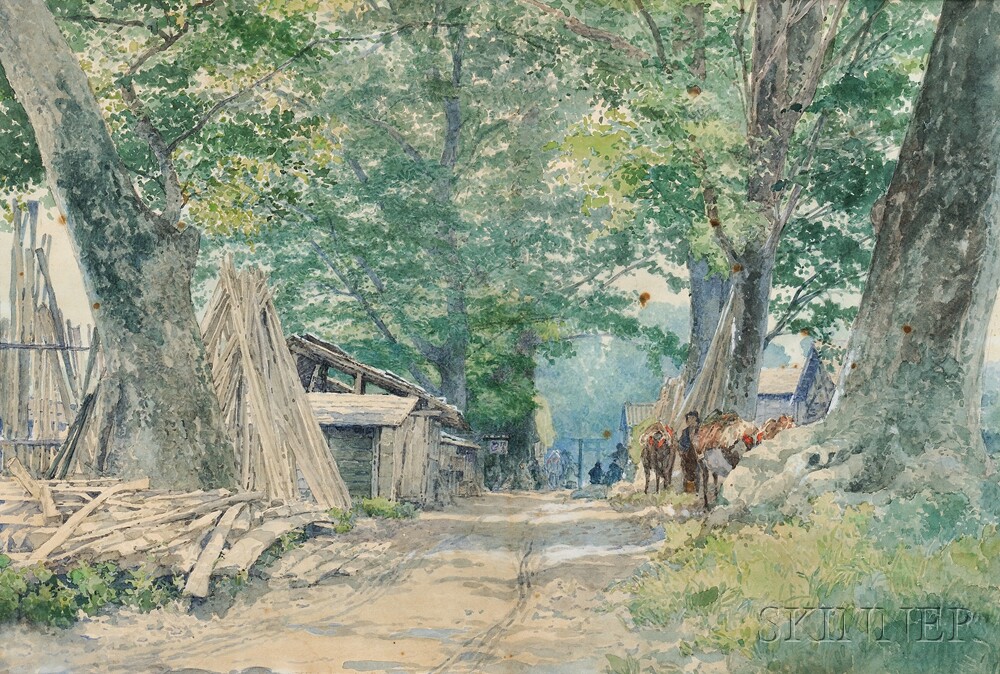 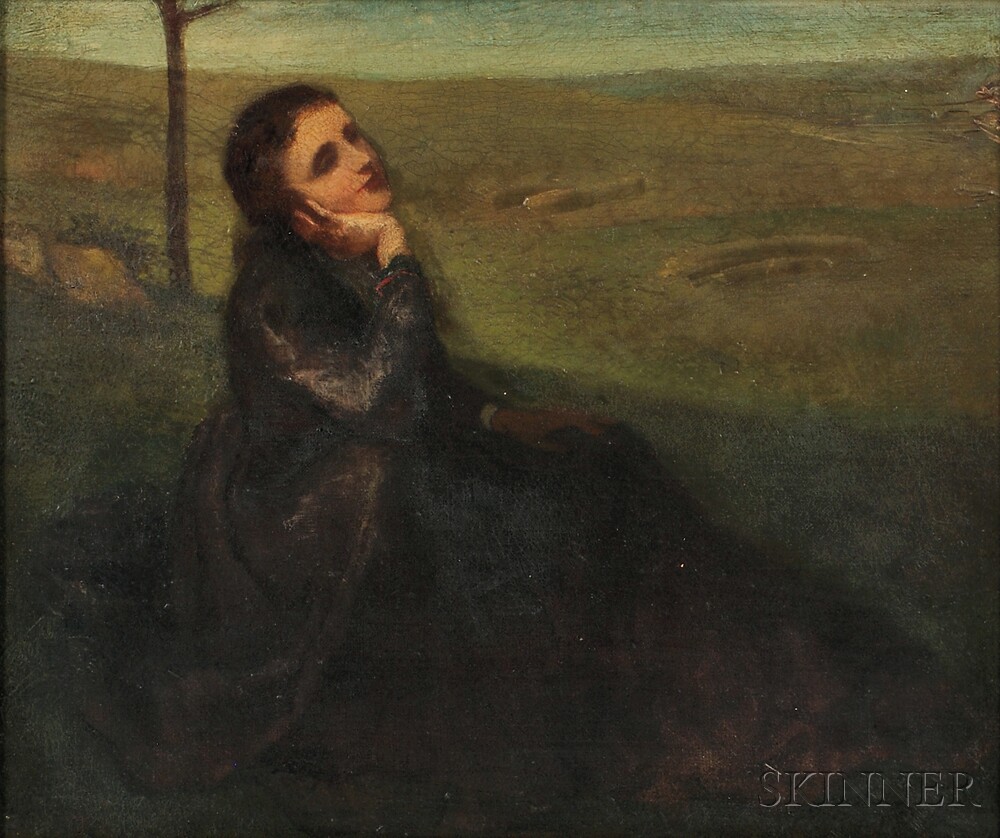 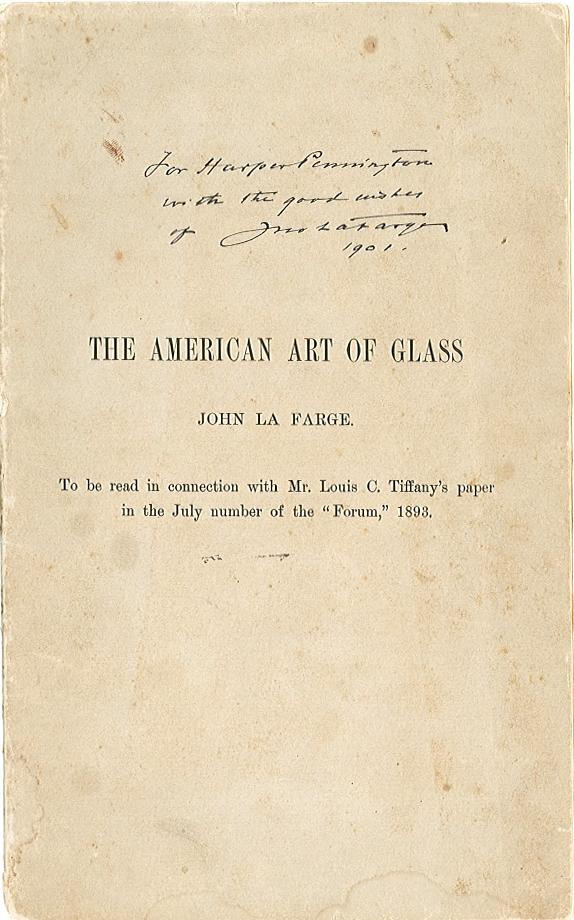