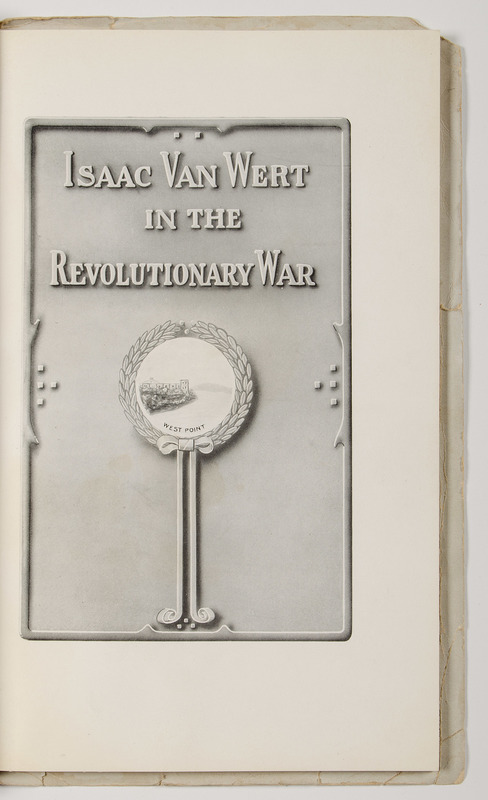 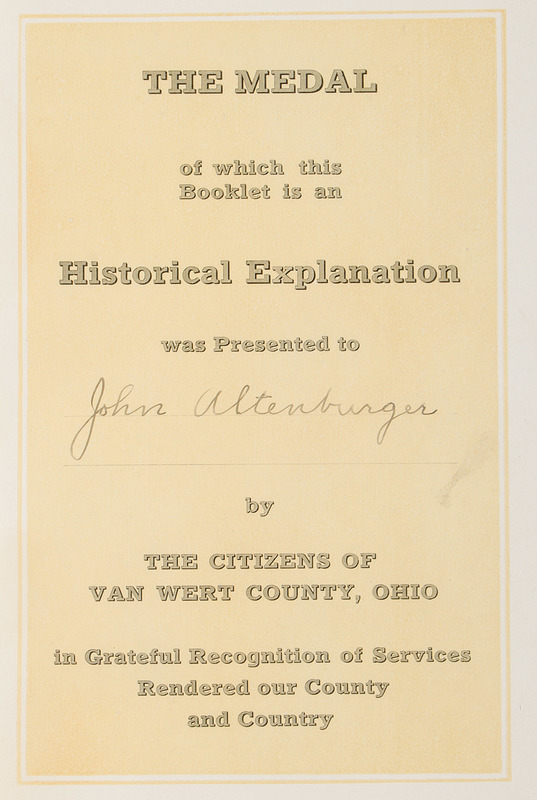 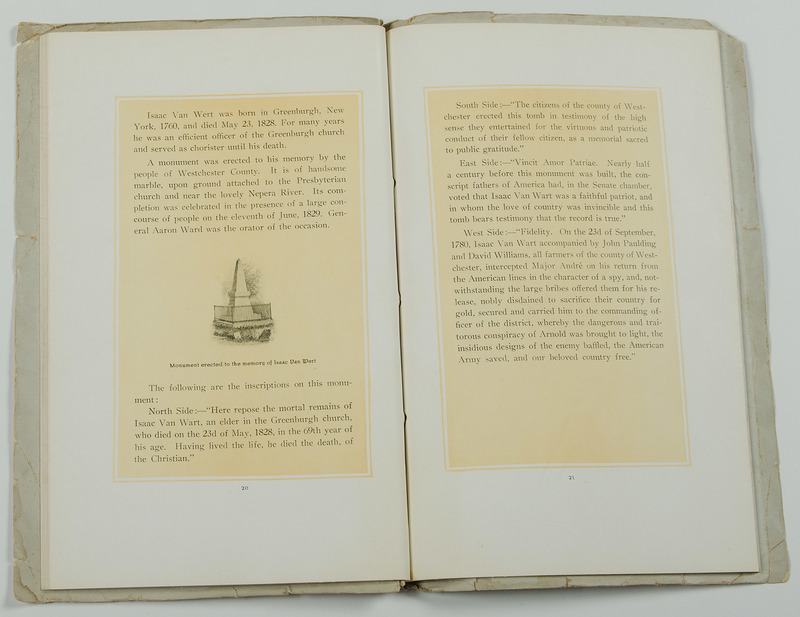 Wilkinson, E.B. Isaac Van Wert in the Revolutionary War. Van Wert, Ohio: T.C. Wilkinson & Son, 1919. Pamphlet, approx. 6 x 9 in., printed wraps, string tied spine, . Includes portrait made from a life mask of van Wert/Wart. Some of Van Wart's descendants have been waging an uphill battle to have the spelling of the name corrected in the historical record. Apparently the family spelled it "van Wart," but in his recommendation to the Continental Congress to reward the three soldiers who stopped and searched Major Andre (van Wart, John Paulding and David Williams), George Washington wrote the name "van Wert." Then Ohio named a county in his honor.... So generally, the feeling has been these past two centuries that changing the spelling would create more confusion than it would clear up (so would property deeds still be valid if they said "van Wert County," for example, rather than the legally changed spelling of "van Wart"), to the dismay of the family (see "Claiborne, William. A War of Van Warts. Revolutionary Misspelling Became a County Misnamed and a Family's Obsession." Washington Post, Tuesday, Oct. 12, 1999, p. A03). Isaac Van Wart was born in Greensburgh, New York, in 1760. David Williams was born in Tarrytown in 1754, and was a cousin of Van Wart (whose mother was a sister of Williams' father). John Paulding was born in New York City in 1758. All joined the volunteer militia, and Paulding served through the entire Revolution (Van Wart would have been fairly young at the beginning of hostilities). Benedict Arnold, apparently angry at being passed over for promotion, in spite of his service, decided to cast his lot with the British Army, where opportunities appeared better. He was given command of West Point, NY, and arranged with the British to turn over control of that facility, giving the British control of the Hudson Valley, in exchange for a Brigadier Generalcy. He sent papers to British command by way of John Andre, who secreted them in his socks. When Andre was stopped by the three militiamen, Paulding was reportedly wearing a Hessian uniform, acquired by a colored woman for him to escape British prison (he was thrice a POW). When Andre saw this, he thought he was among friends and identified himself as a British officer. The three militiamen had the presence of mind to search Andre, and as the bribes increased, they became more certain there was a reason to continue the search. Eventually they got to his shoes and socks. Andre was arrested, Arnold was informed, and escaped on the HMS Vulture. Andre was court-martialed and hanged. The booklet goes into much more detail about the capture of Major Andre, but the inscription on Van Wart's monument summarizes the significance. Two of the four sides of the tomb have the sayings from the medal. On the West side is "Fidelity. On the 23d of September, 1780, Isaac Van Wart Accompanied by John Paulding and David Williams, all farmers of the county of Westchester, intercepted Major Andre on his return from the American lines in the character of a spy, and , notwithstanding the large bribes offered them for his release,nobly disclaimed to sacrifice their country for gold, secured and carried him to the commanding officer of the district, whereby the dangerous and traitorous conspiracy of Arnold was brought to light, the insidious designs of the enemy baffled, the American Army saved, and our beloved country free." At Washington's insistence, the three men were given land in Westchester County, NY (valued at $2500), a life pension of $200 per anum, and a silver medal, with "Fidelity" on one side, "Vincit Amor Patriae," on the other (The Love of Country Conquers). This pamphlet was printed for the presentation of a copy of Van Wart's medal. "The Medal of which this booklet is an historical explanation was Presented to John Altenburger by the Citizens of Van Wert County, Ohio, in Grateful Recognition of Services Rendered our County and Country." Condition: Some scuffing to edges of 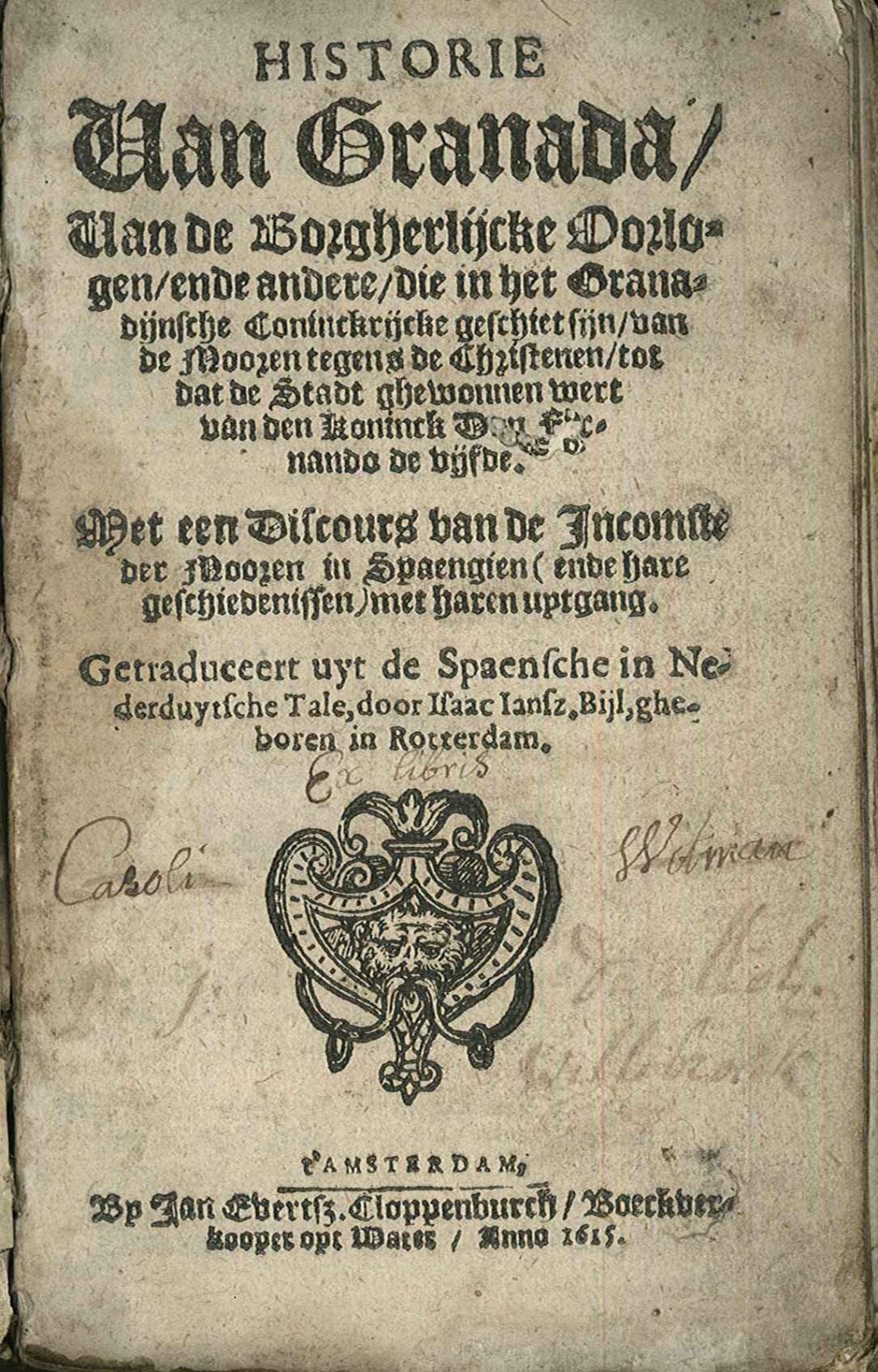