Hiroshi Sugimoto The Music Lesson 1999 Pigment print. 53 1/8 x 41 3/4 in. (134.9 x 106 cm) Signed in ink, printed title, date and number 5/5 on an artist's label affixed to the reverse of the frame.
Provenance Acquired directly from the artist Yoshii Gallery, New York Private Collection, New York Literature Guggenheim Museum, Sugimoto Portraits, p. 101 for a variant Mori Art Museum, Tokyo and Hirshhorn Museum and Sculpture Garden, Smithsonian Institution, Washington D.C., Hiroshi Sugimoto p. 32 Sugimoto, Time Exposed, p. 21 Catalogue Essay In 1999 Sugimoto was commissioned by the Deutsche Guggenheim to do his Portraits series, of which the current lot is an example. All subjects were life-size wax figures culled from such genres as royalty, politics, military, art and religion. The vast majority of the figures were depicted at three-quarters length, in keeping with the format of the revered Flemish Golden Age portraiture made famous by Frans Hals and Rembrandt in the 1600s. Sugimoto lit each wax figure with exacting attentiveness, cleverly animating his figures. Each portrait is subsequently injected with a livelihood and character that negate the immortal quality of the “sitter” and instead presents him or her as a nearly tangible human. As a result, The Last Supper becomes a bustling dining scene; Pope John Paul II appears midsentence while addressing a crowd; and Princess Diana seems at the brink of laughter. Indeed, Sugimoto reversed his earlier timeless methodology and enlivened his immortal subjects with a fresh instantaneity that defies viewers’ expectations. And none could appear more so than those depicted in The Music Lesson, based on Vermeer’s Lady at the Virginals with a Gentleman, 1662-1665, (fig. 1). As one of Vermeer’s most widely recognized paintings, the work embodies the classic features in the late Dutch master’s enigmatic domestic scenes. A young upper-class woman is seen standing by the Renaissance-era musical instrument, while a man, possibly a suitor or a teacher, stands nearby. The scene is naturally lit from a handsomely sized window, which casts a soft and incandescent light on the subjects. Like most of Vermeer’s paintings, a mysterious air permeates the scene. It is not known whether the scene depicted was based on an imagined or an actual scene, a debate that is further complicated by the appearance of the gentleman figure in two other paintings by Vermeer, The Geographer and The Astronomer. Whether the tableau presents an idealized version of domestic living or whether it is an intimate momentary glimpse of an actual couple allows the scene to exist in the space between fantasy and reality. Out of the entire Portraits series, Sugimoto’s The Music Lesson—shot at Madame Tussauds in Amsterdam—is the only image in which the wax figures are not isolated from their original diorama. Arguably, this is because all other wax figures are based on individuals whose existence has not been refuted. Therefore, by capturing the entire diorama in The Music Lesson from the same angle as its painted counterpart, Sugimoto allows the scene to continue occupying a dual existence—at once a near-tangible courtship scene as well as a mysterious and mythic work of art. Moreover, by presenting the scene in full color—and being the only work from the series that is presented so—Sugimoto’s The Music Lesson takes over where Vermeer left off, bringing another layer of life into the scene. Read More Artist Bio Hiroshi Sugimoto Japanese • 1948 Hiroshi Sugimoto's work examines the concepts of time, space and the metaphysics of human existence through breathtakingly perfect images of theaters, mathematical forms, wax figures and seascapes. His 8 x 10 inch, large-format camera and long exposures give an almost eerie serenity to his images, treating the photograph as an ethereal time capsule and challenging its associations of the 'instant.' In his famed Seascapes, Sugimoto sublimely captures the nature of water and air, sharpening and blurring the elements together into a seamless, formless entity. This reflection of the human condition and its relationship with time follows through his exploration of historical topics and ti 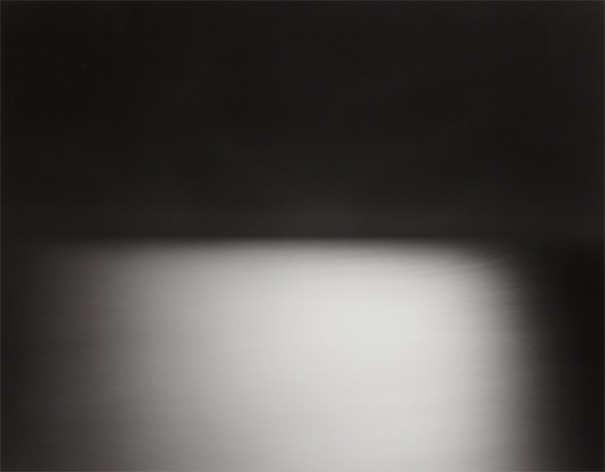