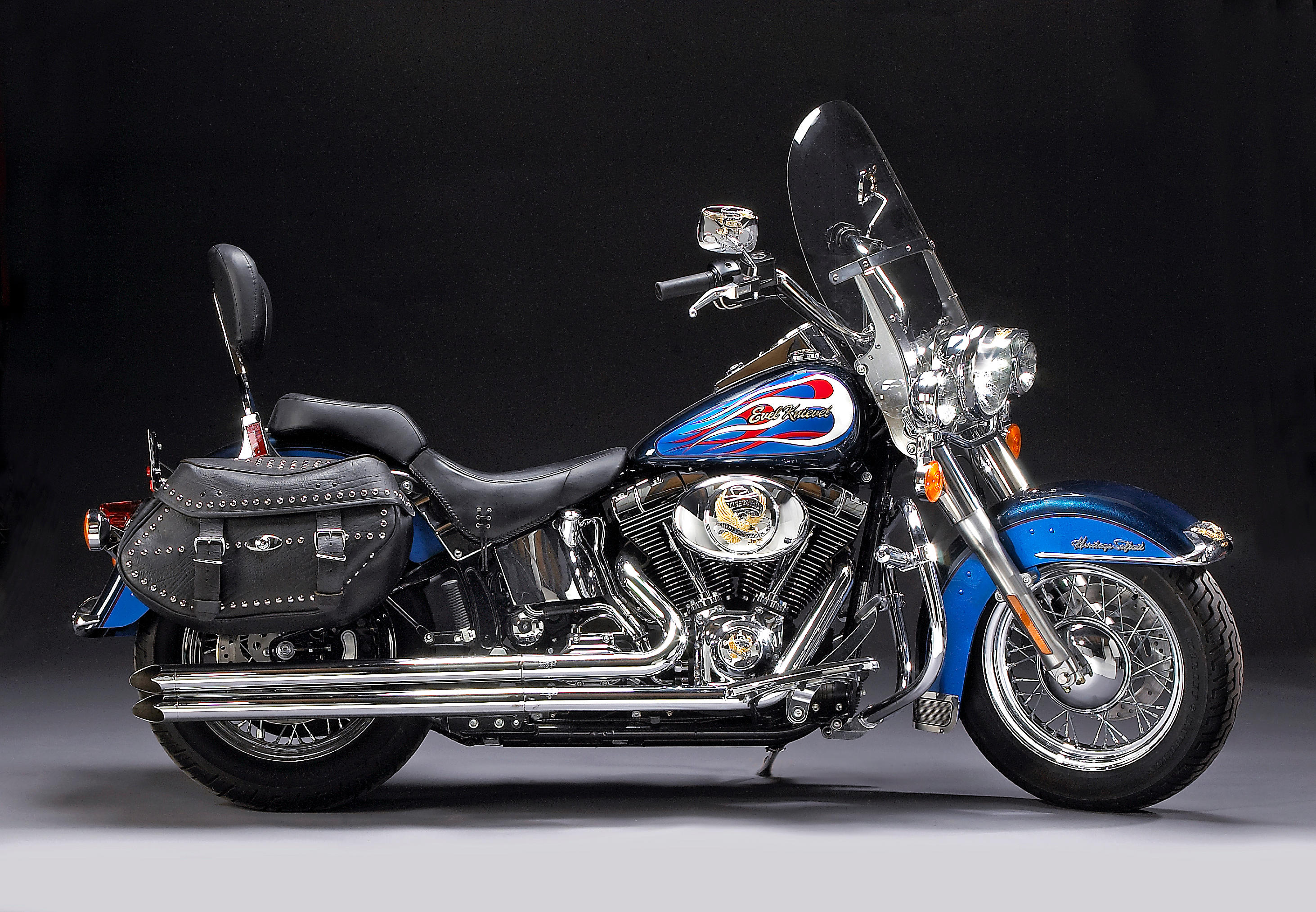 This Heritage Softail’s accompanying original Oregon Certificate of Title records that its first owner was none other than flamboyant motorcycling showman, Evel Knievel. Born Robert Craig Knievel Jr. on October 17th 1938 in Butte, Montana, ‘Evel’ Knievel was that rare commodity: a motorcyclist recognized far beyond the confines of the two-wheeled world. A household name as well known in Peking as Peoria, Knievel owed his fame to a succession of daring motorcycle jumps that saw him break a record 40 bones and write-off countless bikes. His nationally televised jumps, including the 1974 attempt to clear the Snake River Canyon at Twin Falls, Idaho are among the most watched on ABC’s Wide World of Sports. Knievel made most of his jumps aboard Harley-Davidson motorcycles, so it is not surprising that a Harley would be his choice for road use. A thrill-seeker from his earliest days, Knievel won the Northern Rocky Mountain Ski Association’s Class A Ski Jumping Championship in 1959 aged 21. After a succession of unrewarding jobs, failed business enterprises and occasional brushes with the law, Knievel ended up working at Don Pomeroy’s motorcycle shop in Sunnyside, Washington. It was there that Don’s son, famous moto-cross racer Jim Pomeroy, taught him how to ‘wheelie’ and perform basic stunts. As a boy, Knievel had seen Joey Chitwood’s Auto Daredevil Show and, armed with his newly developed skills, conceived the idea of doing something similar using motorcycles. After his first successful solo show, jumping over a caged mountain lion and boxes of rattlesnakes, Knievel acquired some fellow Motorcycle Daredevils. Their first show held on January 3rd 1966 at Indio, California was a huge success, but after Evel’s subsequent injury on February 10th - the first of many - the group broke up and he returned to solo performing. Stealing a march on rival performers who jumped pools of water or wild animals, Knievel began jumping lines of cars, adding more to the total with each successive attempt. Some of his most spectacular crashes, and serious injuries, resulted from the car-jumping stunts, but with each performance, whether successful or not, the Knievel legend grew. On December 31st 1967 Knievel jumped the fountains at Caesar’s Palace, Las Vegas, crashing massively on touch down. Cars, buses and trucks continued to feature regularly in his act but something much bigger was planned: the Grand Canyon. Although the project was much talked about, eventually Knievel was forced to recognize that the authorities would never allow it to happen, and instead opted to jump the Snake River Canyon at Twin Falls, Idaho. The distance involved ruled out a conventional motorcycle, so Knievel commissioned the construction of the rocket-powered ‘Skycycle’. Two Skycycles were built - ‘X1’ and ‘X2’ – the latter being used for the actual attempt, which took place on September 8th 1974. Although Knievel successfully cleared the canyon, the Skycycle’s drogue parachute malfunctioned, causing it to drift back to the launch side where it crashed. Amazingly, he sustained only minor injuries. After Snake River, Knievel returned to conventional jumping – usually buses – making his last such attempt in March 1981. With his daredevil days consigned to the history books, Knievel’s fortunes declined. A mercurial character, he suffered arrests, imprisonment, bankruptcy and divorce before re-emerging in the public eye in the 1990s as representative of a number of concerns, Harley-Davidson among them. His health declined thereafter and in February 1999 he underwent a liver transplant operation, necessitated by Hepatitis C contracted from one of his many surgery-related blood transfusions. Inducted into the Motorcycle Hall of Fame later that same year, Evel Knievel died on November 30th 2007 and was buried in his hometown of Butte, Montana. An American icon revered as a hero by millions worldwide, Evel Knievel - arguably the world’s greatest ever stuntman and certainly it best

A Lady's wristwatch, by Baume, formerly

Formerly The Property of Rolls-Royce Ltd

Formerly the property of C.C.Tompkinson

Formerly the property of the late J.T.R.

FORMERLY THE PROPERTY OF J. P. MORGAN an

FORMERLY THE PROPERTY OF NELSON A. ROCKE

FORMERLY THE PROPERTY OF N.H. "AVAILABLE

FORMERLY THE PROPERTY OF HIS MAJESTY KIN

FORMERLY THE PROPERTY OF CAMERON PECK