Family group: A Second World War D.F.C. group of six awarded to Flying Lieutenant T. A. Wickham-Jones, Royal Air Force Volunteer Reserve, who was also awarded the American D.F.C. for his gallantry as a pilot in Halifaxes of No. 77 Squadron in 1943-44: a pre-war actor who used the stage name ‘Anthony Wickham’, he went on to become one of the country’s youngest theatre managers and producers prior to his death in a civil air disaster at Heathrow in March 1948 Distinguished Flying Cross, G.VI.R., the reverse officially dated ‘1944’; 1939-45 Star; Air Crew Europe Star; Defence and War Medals 1939-45; United States of America, Distinguished Flying Cross, with its case of issue, together with Royal Life Saving Society bronze swimming medal, the reverse inscribed ‘T. A. Wickham-Jones, July 1936’, and a set of related miniature dress medals, generally extremely fine The Great War campaign group of four awarded to 2nd Lieutenant C. A. Wickham-Jones, Royal Army Service Corps, late Surrey Yeomanry British War and Victory Medals (2 Lieut. C. A. Wickham-Jones); Defence Medal 1939-45; Territorial Force Efficiency Medal, G.V.R. (703 L. Cpl. C. A. Wickham-Jones, Surrey Yeo.), together with a National Territorial Championship prize medal, 1911, silver-gilt , the reverse inscribed ‘Tpr. C. A. Wickham Jones’, and ‘Blackheath Terriers’ prize medals (3), silver, all named to the recipient and dated 1912-13, and a set of related miniature dress medals, good very fine and better (25) £1600-1800 Footnote D.F.C. London Gazette 17 November 1944. The original recommendation states: ‘This officer, a Captain of Aircraft, has completed his first operational tour of 35 Sorties, the opening phase of which included three attacks on Berlin, and was marked throughout by a good photographic record containing numerous aiming point photographs, revealing consistency of accuracy. A striking note of Flight Lieutenant Wickham-Jones’s tour is that he never failed to take off on any operation in which he was detailed to take part. It can be said that the methodical preparation which he invariably made, did much to ensure his very fine performance, that of 100% operational effort without failure. This officer has displayed fine leadership, being possessed with a bright and cheery personality which has served as a good tonic to his crew and contributed in no small measure to the high standard of morale throughout the Squadron as a whole. In recognition of this Captain’s splendid all round ability, I strongly recommend that he be granted the award of the D.F.C.’ United States of America D.F.C. London Gazette 15 May 1945. The original recommendation states: ‘This officer has had an outstanding operational record. His first two sorties were completed, in the capacity of 2nd Pilot, against Mannheim and Berlin in November 1943. He has carried out successful attacks on Berlin and other important targets as Captain of Aircraft. Flight Lieutenant Wickham-Jones has participated in extensive mine-laying operations in the Baltic and has also completed mine-laying sorties to Kiel Bay. He has taken a leading part in attacks on marshalling yards and, on the eve of D-Day, participated in the attack on a coastal battery covering the beachhead area. Latterly he has been engaged in attacks against flying bomb sites. Flight Lieutenant Wickham-Jones has brought back excellent photographs of the target areas and has been a very courageous Captain of Aircraft.’ Thomas Anthony Wickham-Jones was a child actor who by 1936 ‘had appeared in 26 plays under his stage name of Tony Wickham. His best known part was Bombo Faringdon, the boy twin in Ian Hay’s play The Housemaster, at the Apollo’. Having then entered the film world in the late 1930s, he volunteered for the R.A.F. on his coming of age and was trained as a pilot in Canada. Posted to No. 77 Squadron as a Sergeant Pilot, a Halifax unit operating out of Elvington, Yorkshire in late 1943, he undertook his first two sorties as a 2nd Pilot - name

An Interesting Family Group: including M

A Collection of Awards to the R.F.C. and 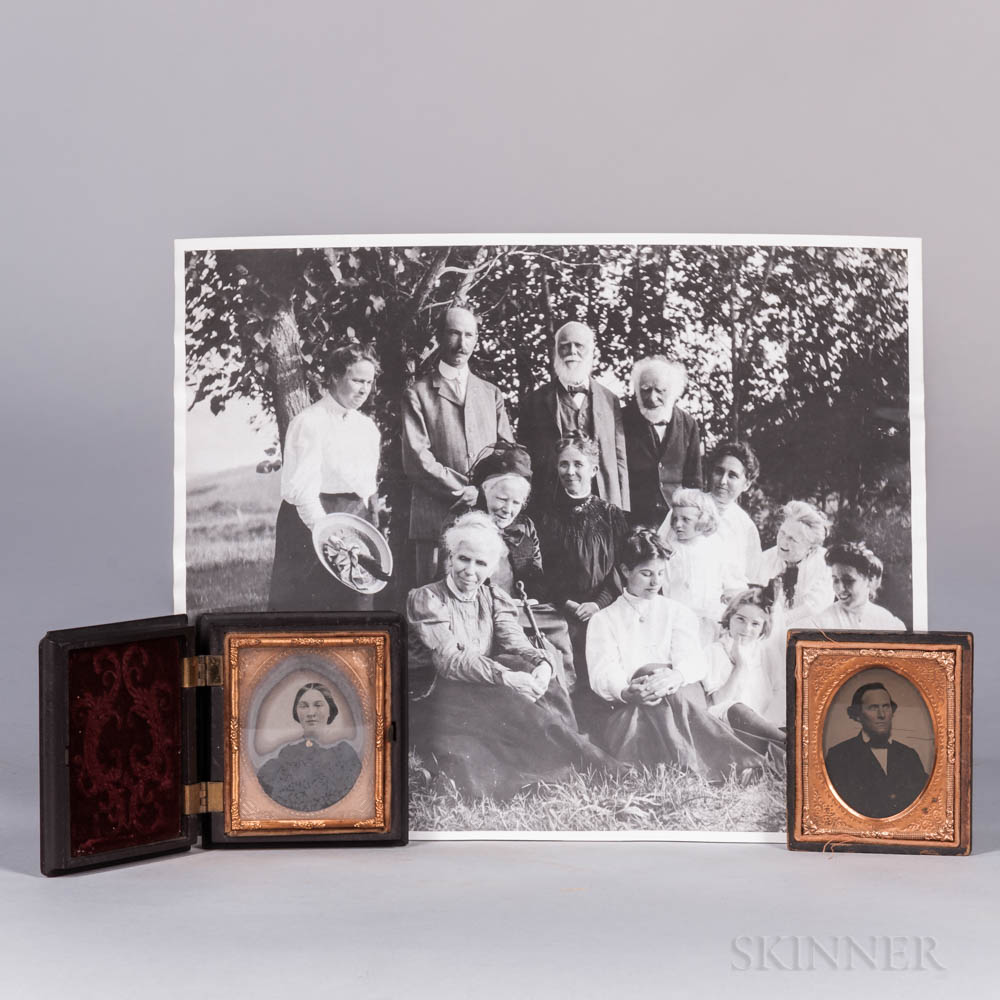