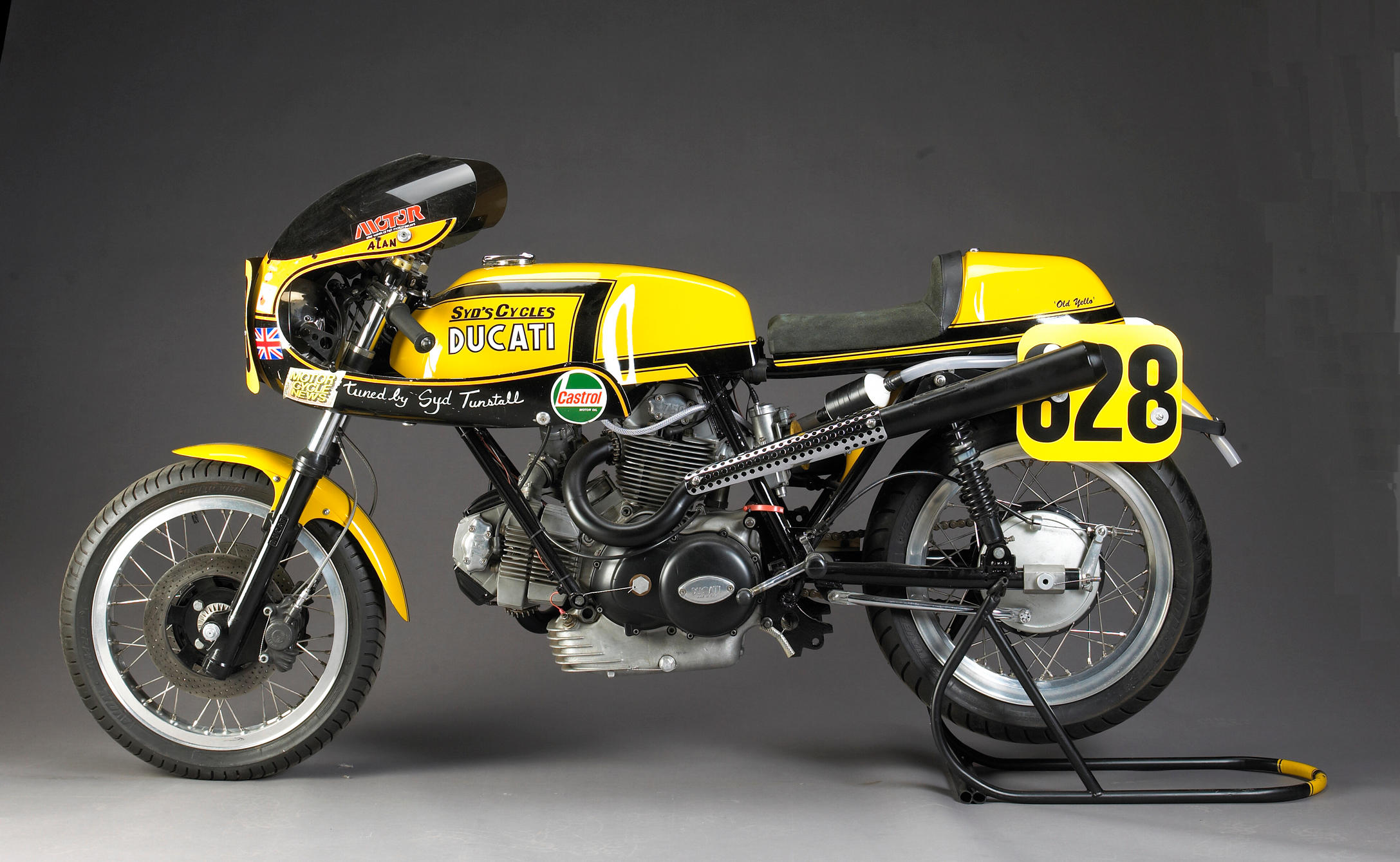 One of the most famous and successful privateer-built Ducati racers ever, this 750 Sport was acquired by expatriate Englishman Syd Tunstall of Syd’s Cycles, St Petersburg, Florida and raced by him in production machine events in the USA. In 1975 the Ducati – known as ‘Old Yellow’ or ‘Old Yello’ – was handed over to Syd’s son Malcolme, who stepped up to the emerging ‘Superbike’ class, winning several races and finishing 5th in the series despite the fact that the bike was virtually stock. In 1976, Malcolme and Old Yello won the very last Open Superbike race at the Sebring circuit before it closed, beating Robert Pendleton’s fully faired 997cc Yoshimura Kawasaki. The following year the engine was rebuilt, tuned and enlarged to 885cc to maintain competitiveness in Open Superbike events, as recounted by Mick Walker in his book, Ducati Twins: “Two seasons of hard racing had left the machine still in very good condition, but despite being very little worn, the standard con-rod assembly was replaced, since the plan was to increase the engine’s capacity. This was done by boring out to 86 mm and fitting 860GT pistons, which had been machined for a higher compression ratio. The 32mm Dell’Ortos were bored out to 36mm and factory Imola exhaust pipes were fitted, together with gutted Conti silencers to conform to AMA rules. The running gear now consisted of Lockheed brakes, a WM3 front and WM6 rear rim, both in 18” sizes.” These upgrades certainly worked, as Malcolme - now qualified as an AMA Expert - finished the 1977 season as Florida Superbike and Grand Prix Champion. Old Yello benefited from further tuning, receiving bigger valves, Imola-profile cams, factory-specification high-level megaphones and other modifications in 1978, but the following season was temporarily retired from racing while the Tunstalls concentrated on Syd’s new 900SS-based Superbike racers. During 1980/81 the bike was used occasionally as back-up for the 900SS racers and then entrusted to racing journalist and Ducati aficionado Alan Cathcart. As the latter recalls in his 1987 book, Ducati: The Untold Story, “In 1979, the old lady was retired in favor of the newer bike… then from 1981 onwards entrusted to the author to race in 'Battle of the Twins" (BoTT)events at Daytona and elsewhere, never finishing out of the top six. In over 450 documented races (including heats and finals), Old Yellow has never been dropped nor, remarkably, ever failed to finish a race – a fine testament to Syd Tunstall’s preparation abilities. Who says Ducatis aren’t reliable?” Between 1981 and 1986 Alan enjoyed countless successes with Old Yello, culminating in March 1986 with a magnificent 5th place in the Daytona BoTT race ahead much more modern machinery, an outstanding achievement for a 13-year old machine. Old Yello was clocked at 146 mph during the race, possibly the highest speed ever achieved by a bevel drive, valve spring Ducati v-twin in active competition. In 1986 Old Yello was purchased from the Tunstall’s by Alan Cathcart and brought to the UK to compete in domestic and European BoTT and Classic events, although the number of races actually contested was limited. At around this time the current owner - an enthusiastic Ducati collector - became acquainted with the bike and in 1990 purchased Old Yello from Alan Cathcart. Unused for the previous couple of years, the machine was collected at the Snetterton circuit during the CRMC’s two-day meeting in September 1990, and photographs taken of it at this time form part of the accompanying history file. The vendor’s intention was to restore Old Yello for use in classic racing in line with CRMC rules. The 885cc ‘round case’ engine has been thoroughly checked and rebuilt with almost every bearing and seal replaced, the exception being the big-end assembly, which was inspected by Steve Wynne of Sports Motorcycles and found to be in perfect condition. A world-famous marque expert, Steve had prepared Mike Hailwood’s Sports Motorcycles-entere