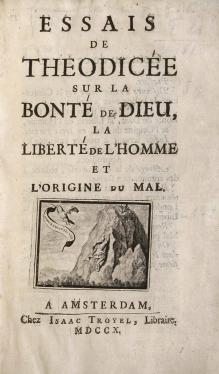 Title: Essais de Theodicée sur la Bonté de Dieu, la Liberté de l'Homme et l'Origine du Mal Author: [Leibnitz, Gottfried Wilhelm von] Place: Amsterdam Publisher: Chez Isaac Troyel Date: 1710 Description: 2 volumes in 1. [52], 660, 99 pp. Copper-engraved vignettes on the title-pages. [bound with] Causa Dei Asserta per Justitiam Ejus, Cum cæteris ejus Perfectionibus, Cunctisque Actionibus Conciliatam. 46 pp. Woodcut device on title-page. (8vo) 7½x4¼, early vellum. First Edition. Rare first edition of the only major philosophical work by Leibnitz published during his lifetime. Included are both parts of the "Theodicée" (the smaller second volume of 99 pages bears the caption title on the first page "Reflexions sur l'Ouvrage que M. Hobbes..."), each with its own title-page. The third part, "Causa Dei," with the same publisher and date, is a Latin summary of the "Theodicée" and is a distinct publication, with separate title-page and signatures and apparently sold separately as well as with the main work - it was issued with a folding table, not present in this copy and with no evidence that it was ever bound in. The lack of the table may in fact indicate an early issue. Leibnitz' place in the history of philosophy is reflected on at length in Printing and the Mind of Man: "Leibnitz was one of the last `universal men' of the type which the Italian Renaissance had ideally postulated: philosopher, historian, mathematician, scientist, lawyer, librarian, and diplomat. In all of these fields either his actual achievements of his seminal suggestions have become part and parcel of European thought..." The present work "was the outcome of discussions with Sophie Charlotte on matters concerning free will, evil and the justification of God's creation, many of which had been raised by Bayle. In this work Leibnitz was at his ease, pouring out his vast learning with an avoidance of technicality and finding no difficulty in replying to objections in such a way as to appeal to Sophie Charlotte, who, while interested and intelligent, was not a professional philosopher. One of the interesting things about the Theodicy is the way in which Leibnitz' memory unearthed ideas and views from his early years; a lifetime's ideas are in it. It is not to be put aside as mere recreation for a queen; unsystematic though it is, it contains many passages that give clear and explicit expression to many of Leibnitz' views" - L.J. Russell in Encyclopedia of Philosophy. PMM 177. Lot Amendments Condition: Vellum bowed with some rubbing and aging; some darkening and occasional spotting to contents, old booklabel of Prof. Clemens on front pastedown along with old 5-line ink notation, early shelf mark on the verso of the front endpaper, still a crisp, near fine copy. Item number: 179818 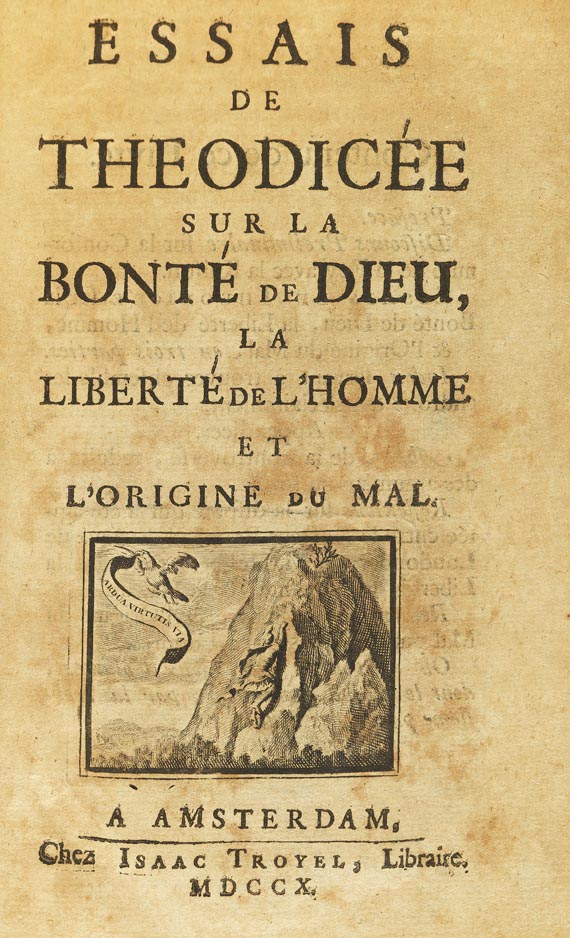 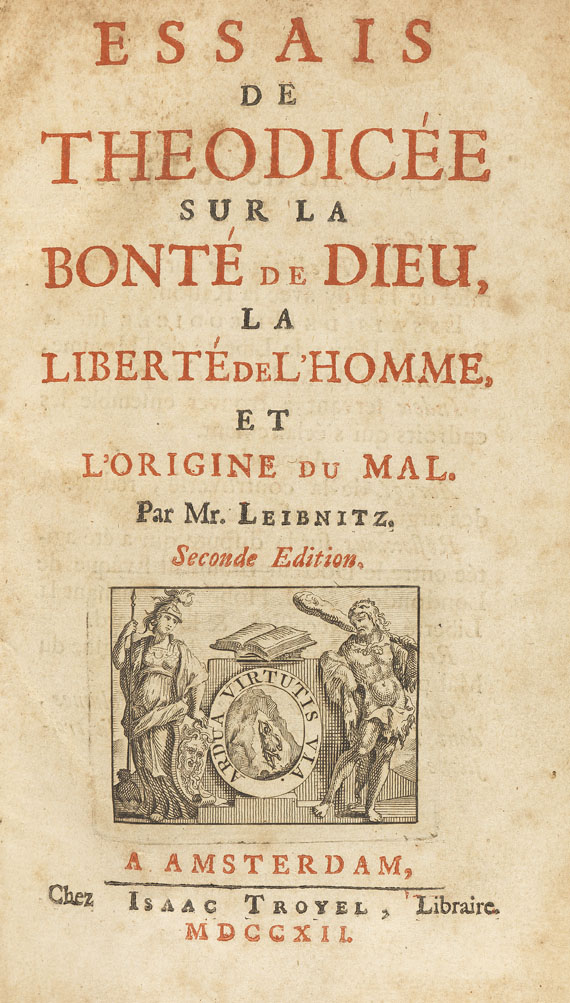 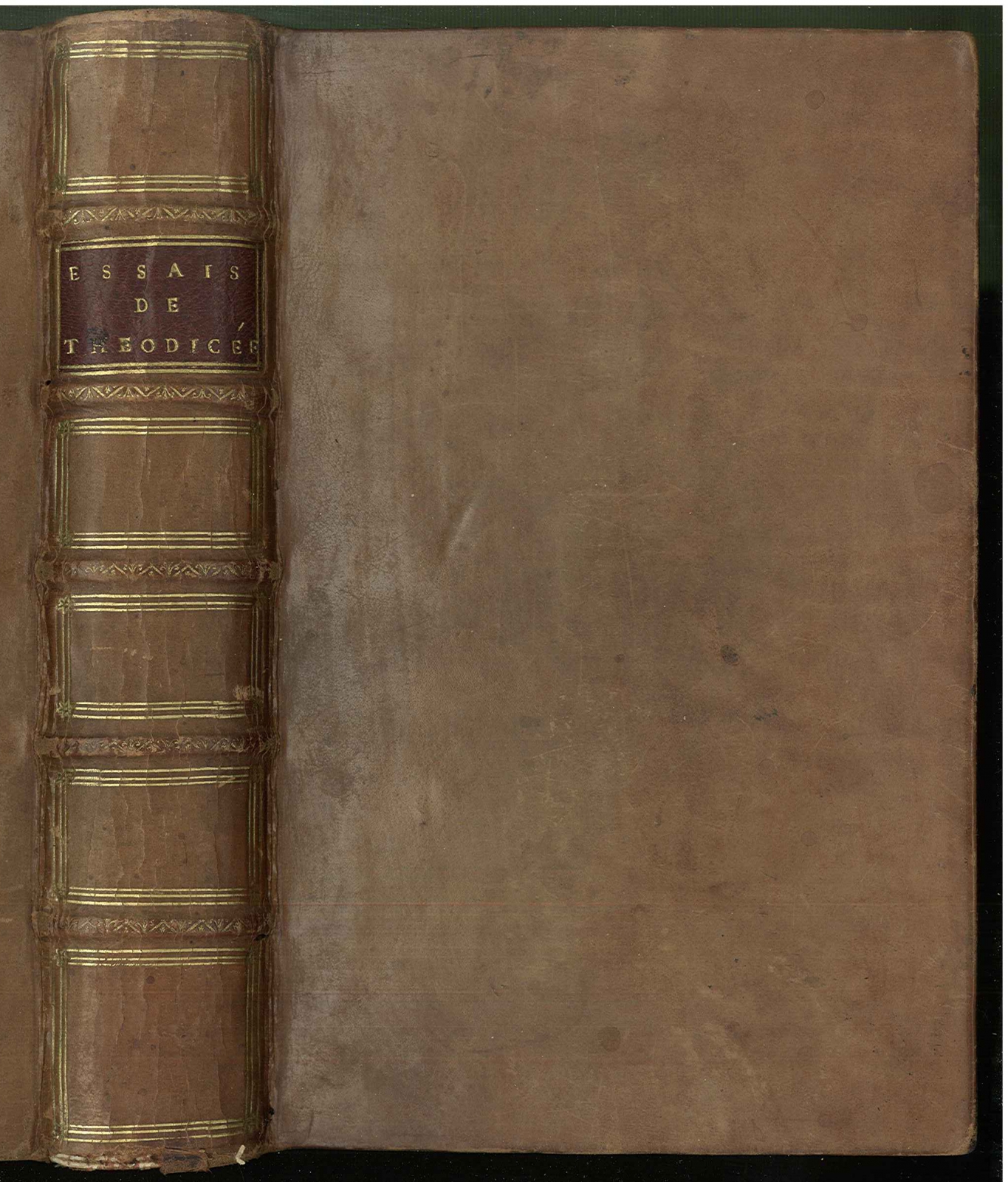