Engravings and Etchings of Buildings and Cities, Plus 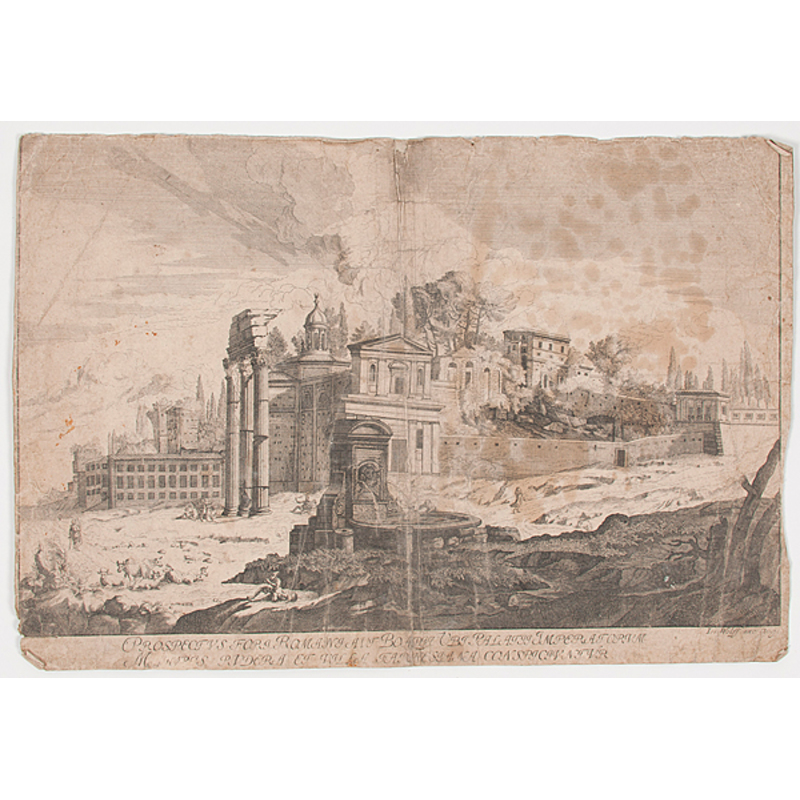 Continental, 17th-19th centuries. A collection of six engravings and etchings with cities and buildings as subjects, including Prospectus Fori Romani Avt B[illegible] Ubi Palatii Imperatorum M[illegible] Rudera Et Villa Farnesiana Conspicivntur by Jeremias Wolff (German, 1663-1724), on laid paper; Veue de la Saincte Chapelle de Bourbon l'Archambaut by Pierre Jean Mariette (French, 1694-1774), on laid paper; an engraving from Monumenta Boica by Joseph Anton Zimmermann (German, 1705-1797), on laid paper; a map of the Vatican during the time of Innocent X with labeled sections, on laid paper; three etchings of German castles on the same page, unknown artist, on laid paper; an etching of St. Benedictus Kirche, marked Stahlstich v. C. Steinicken l.r., on wove paper; plus, one engraving depicting the various workers of the city of Persepolis, marked Pl. 27 u.r., unknown artist; all unframed; largest plate 18.25 x 12.5 in. (Wolff). From The Old Master Print Collection of Johann Petz (Germany, 1818-1880), Descended in the Family of the Artist Petz was born at Lermoos, Tyrol, in 1818 and showed an early interest in wood carving and drawing. Petz worked as a shepherd for his family as a boy, but fled as a young man to a distant relative in Wildermiemingen to pursue the study of sculpture and drawing, which he did for three and a half years. In 1837, he decided to further his studies in Munich, and by chance he came into contact with the sculptor Konrad Eberhard (German, 1768-1859). Eberhard recognized Petz’s talent and took the young man on as a pupil, and several years later, secured for him a commission for the memorial statue for the famous German scholar Heinrich Klee (1800-1840). Petz’s design outlined a Gothic niche surmounted by a pinnacles and finials, which would house a sandstone sculpture of the Good Shepherd. This marked the beginning of the young artist’s career and established his reputation in Munich. Petz was influenced by Nazarene and Neo-Gothic movements in Bavaria, otherwise known as the Pre-Raphaelite movement in England. Petz would also go on to receive commissions for churches, altars, and tombstones in England and the United States, and was highly sought after as a sculptor and church designer. Several locations for which he designed churches and their decorations are Cham, Arnschwang, Seeon, Vilsbiburg, Isen, and Riedering. Most notably, he contributed the design for a sculpture of the Last Supper for the Frauenkirche in Munich in 1859, which was regrettably lost in air raids during World War II. During his career Petz also worked with Joseph Otto Entres (Germany, 1804-1870) and Joseph Knabl (Germany, 1819-1881). Provenance: The Old Master Print Collection of Johann Petz (Germany, 1818-1880) Condition: Wolff: Adhered to backing, paper wrinkled allover, orange-ish stain on left side, water stain covering part of right side, fading, and toning. Mariette: Adhered to backing, foxing apparent on verso from loose corner, some foxing on obverse u.r. and in upper center, fading, toning, and some creasing down the center, and white mold/mildew on lower half. Zimmermann: Water stains, edges of paper appear to have been trimmed, fading, creasing and wrinkling of paper, tear to l.c. that has been taped over. Vatican: Adhered to backing, tear in u.c., water stain near l.l. and u.l. wrinkling of paper, fading, toning. Castles: Wrinkling and creasing to paper, especially at top, wear to edges, small tears l.l., toning. St. Benedictus Kirche: Toning, creasing to paper across center and lower section, tear repaired with tape u.r. and l.r., and tears at edges of creases. Persepolis: Two small tack holes u.c., toning, small stain on leg on worker labeled 3. For condition inquiries please contact [email protected] Please note that a condition report is only an opinion, given as a courtesy, and should not be treated as a statement of fact. Cowan's Auctions shall have no responsibility for any error or omission.

Eleven Framed Engravings and Etchings of

A collection of etchings and engravings

A folio of engravings and etchings inclu A collection of approximately thirty top

A large collection of etchings, engravin 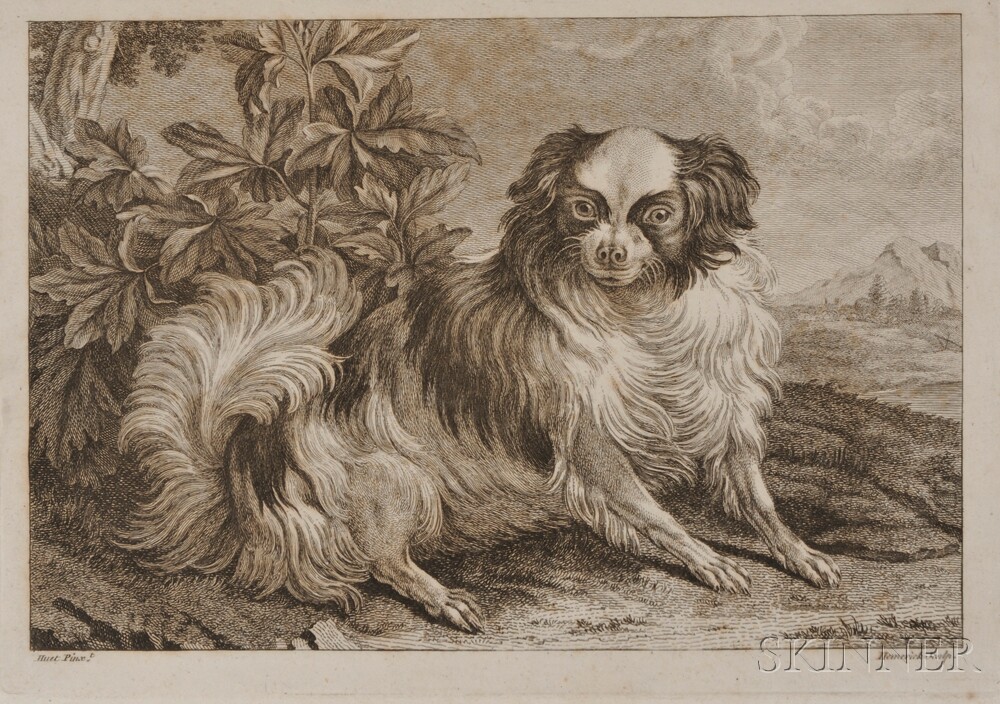 Engravings and Etchings, English and Con

A large album of engravings and etchings 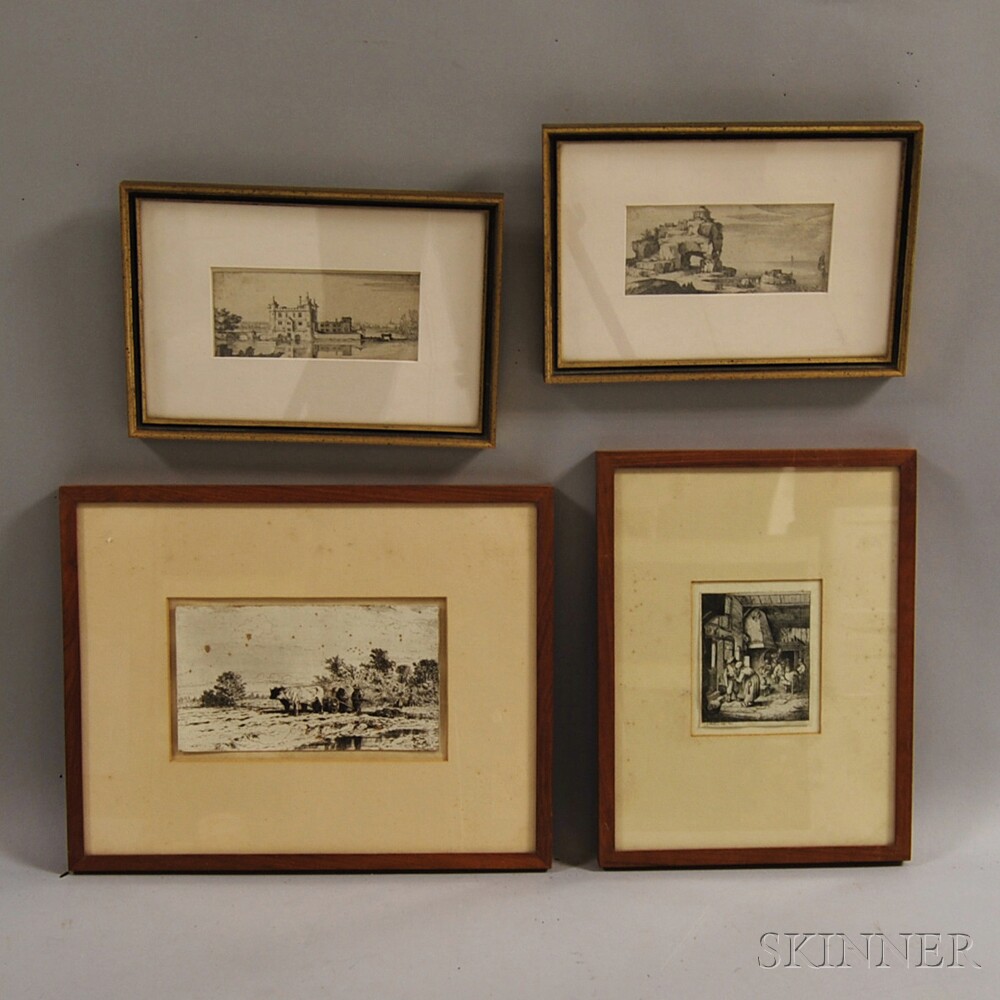