Dia Azzawi (Iraq, born 1939) Rajul Fi'l-Sahraa' (Man In Desert) oil on canvas, framed signed and dated (lower left and verso), executed in 1973 90 x 90cm (35 7/16 x 35 7/16in). Fußnoten A GROUP OF RARE AND IMPORTANT WORKS BY DIA AZZAWI FROM DISTINGUISHED PRIVATE COLLECTIONS; SPANNING PAINTING, WORKS ON PAPER, SCULPTURE AND TAPESTRY Provenance: Property from a private collection, Amman Published: Dia Al-Azzawi, A Retrospective from 1963 Until Tomorrow, Mathaf Arab Museum of Modern Art, Silvana Editoriale, 2017, illustrated in colour Exhibition Catalogue, Dia Al-Azzawi, Patrick Seale Gallery, April 1978 "If poetry is the violation of the world through language, then painting violates the world through a human position that is made of colour and form. Despite its one-dimensionality, the artwork surprises us with what it holds within, as if revealing the pleasures of discovering the essence of things." - Dia Al-Azzawi Dia Azzawi's "Man in Desert" is an enigmatic, sumptuous and superlative psuedo-anatomical composition from one of the artists most significant and creatively fertile periods. In the late 1960's Azzawi, still in Iraq, discovered the acerbic and politically charged poetry Muzaffar al-Nawwab; the subsequent decade saw the artist engaging in an artistic reflection of poetic subject matters, from the revolutionary invective's of Nawwab to the love poems of Waddah al-Yaman. Having been called up for reservist duty and stationed for nine months in the north of Iraq during the Baath party's campaign against the Kurds, Azzawi's artistic response to the wider turmoil he was surrounded with is conveyed through a combination of political and poetic sensibility where some of the vitriol and animosity is softened by the subtlety and grace of poetic expression. As part of his deepening engagement with poetry, Azzawi worked on a series of studies of the 7th century poet Waddah Al-Yaman. Legendary for his handsomeness, he is believed to have been buried alive for falling in love with the caliph's wife. The present work is one of a number of studies which focus on the relationship between Waddah and his beloved, and reflect on the poets mysterious disappearance. The richness, complexity and inner meaning of the present work is perhaps best understood in reference to the subtlety of the artists own intention in its execution: is the painting a mere reflection of the love of a fabled poet for his beloved or is it a more pointed meditation on the plight of the oppressed, who like Yaman himself, are punished at the behest of those in positions of power? Azzawi's figure, contorted either in amorous embrace or in tortuous agony further reflects this duality - the ultimate answer, or its obfuscation from the viewer, is what gives the present painting its true artistic vigour Azzawi's abiding love and respect for the tonal characteristics of the natural world and for ancient Iraqi imagery shines through in this important early work, which echoes the formal approach and inimitable style of the 'New Vision' school of painting he would come to found in 1969. Azzawi typically incorporates structures and visual symbolism harking back millennia in his paintings, which is evident here in the pseudo-figurative form depicted in the composition, which recalls ancient Mesopotamian bass-reliefs and their mythological imagery. Azzawi started his artistic career in 1964, after graduating from the Institute of Fine Arts in Baghdad and completing a degree in archaeology from Baghdad University in 1962. His studies of ancient civilizations and Iraqi heritage had a profound impact on his art, and a key objective in the early formation of his artistic style was to link the visual culture of the past to the present. In 1969, Azzawi formed the New Vision Group (al-Ru'yya al-Jadidah), uniting fellow artists ideologically and culturally as opposed to stylistically. The group's manifesto, Towards a New Vision, highlighted an association between art and revolution, a 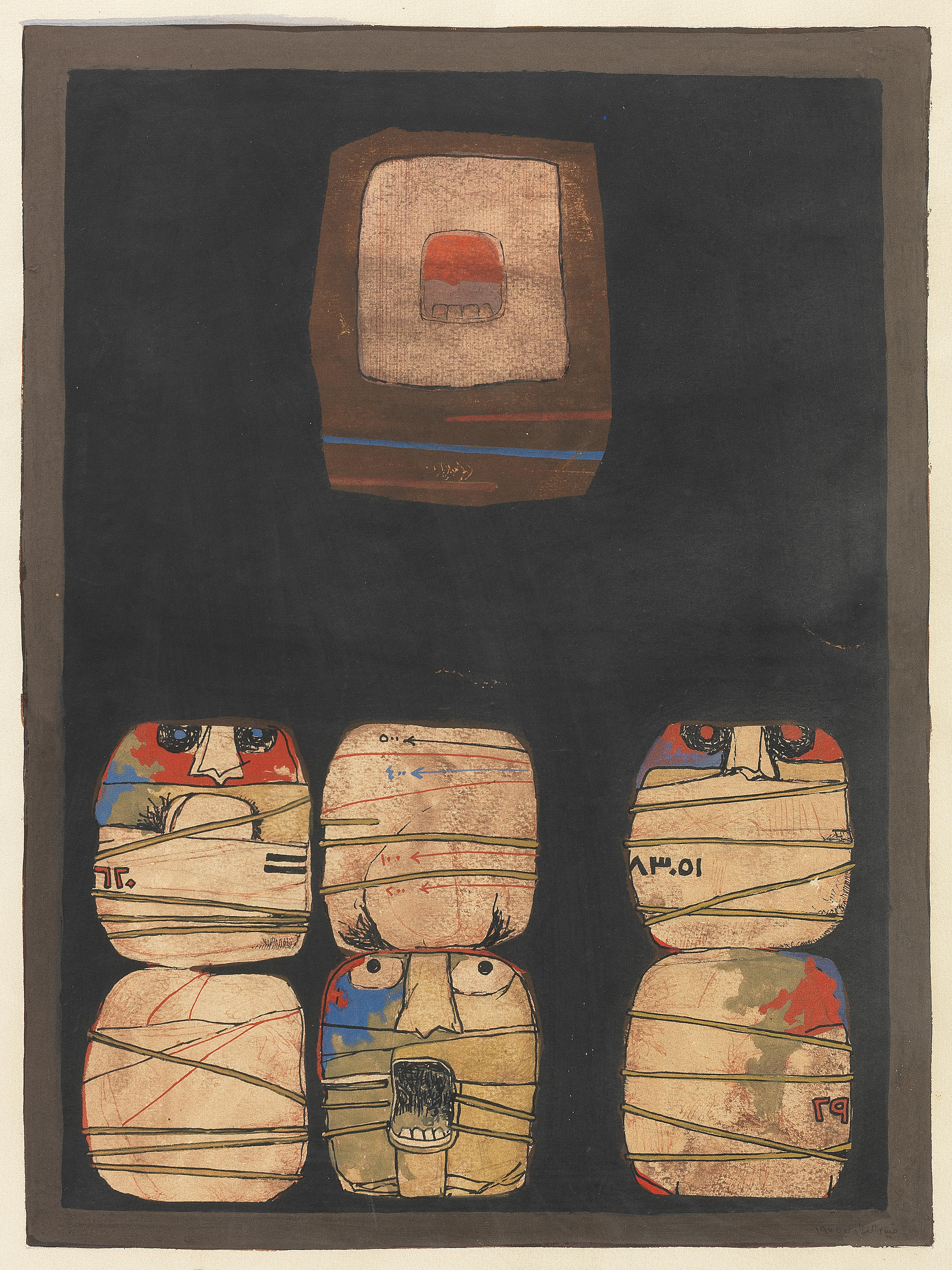