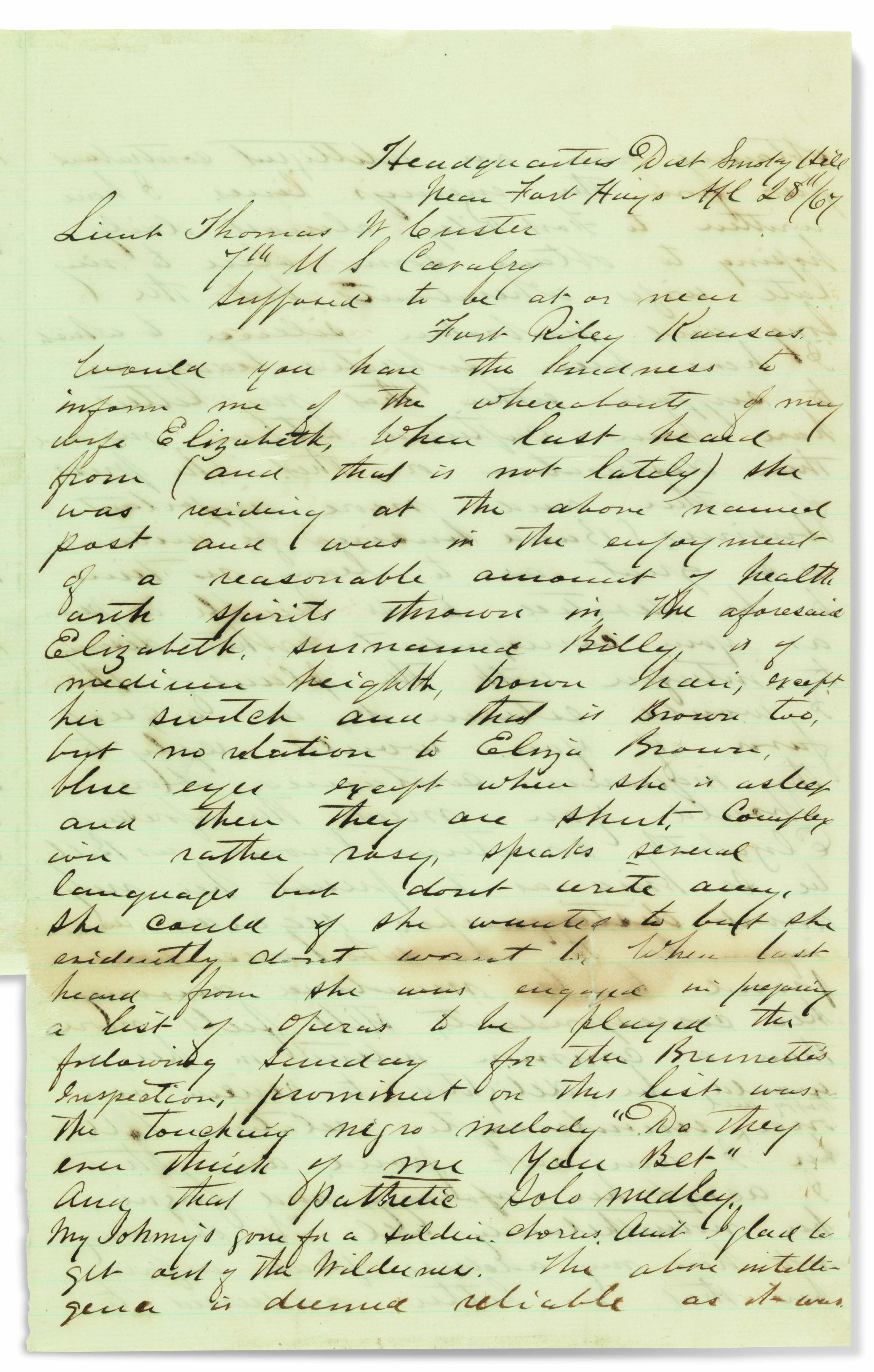 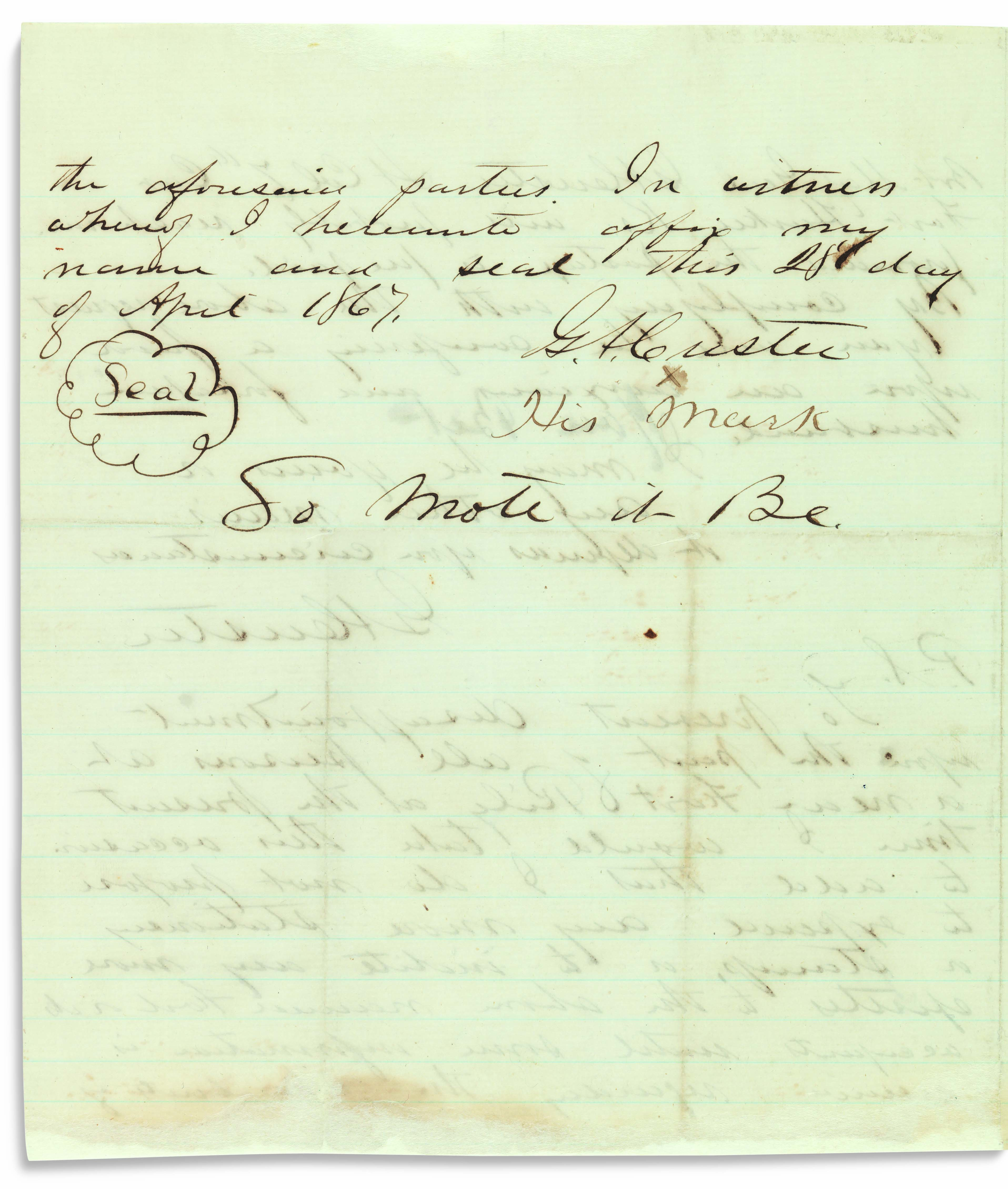 CUSTER, George Armstrong (1839-1876). Autograph letter signed ("G. A. Custer") three times (and again in text), to Thomas W. Custer, "Headquarters Dist Smoky Hill, Near Fort Hays," 28 April 1867. Four pages, 316 x 197mm, bifolium (bottom portion excised from second leaf, not affecting text; top and bottom marginal losses repaired). Housed in a custom clamshell case. After weeks of silence from his wife, Custer sends his brother with a tongue-and-cheek appeal for her whereabouts and insulating her adultery: "Would you have the kindness to inform me of the whereabouts of my wife Elizabeth. When last heard from (and that is not lately) she was residing at the above named post and was in the enjoyment of a reasonable amount of health with spirits thrown in. The aforesaid Elizabeth, surnamed Billy, is of medium height, brown hair, except her switch and that is Brown too, but no relation to Eliza Brown, blue eyes except when she is asleep and then they are shut. Complexion rather rosy, speaks several languages but don't write any. She could if she wanted to but she evidently don't want to. When last heard from she was engaged in preparing a list of operas to be played for the Brunette's Inspection. Prominent on this list was the touching negro melody 'Do They ever Think of Me You Bet'. And that pathetic solo medley, My Johnny's gone for a soldier. Chorus Ain't I glad to get out of the Wilderness. The above intelligence is deemed reliable as it was obtained from an intelligent contraband just from the enemy's lines. I have written to Fort Riley almost daily hoping to obtain some clue to my late wife's whereabouts, but the long and unbroken silence to which I have been subjected leads me to suppose either that my letters have been captured between me and their destination or that the press of other and more important business (Band business for instance) is so great as to leave no time to be devoted to so humble a person as your correspondent." Custer continues in this vein for some time. Later the same year, during Winfield Scott Hancock's expedition against the Cheyenne, he would brashly abandon his post in order to visit his wife resulting in a charge of AWOL and a year-long suspension from duty. [ With :] CUSTER, Elizabeth B. (1842-1933). Autograph letter signed (“Elizabeth B. Custer”) to Mr. Bugby, Stroudsburg, Pennsylvania., 15 September [n.y.].Three pages, 176 x 112mm, bifolium. “Certainly gets all the good out of the name of Custer you can. The man who made the name would not wish it put to better use than to be of service to other self made men.” 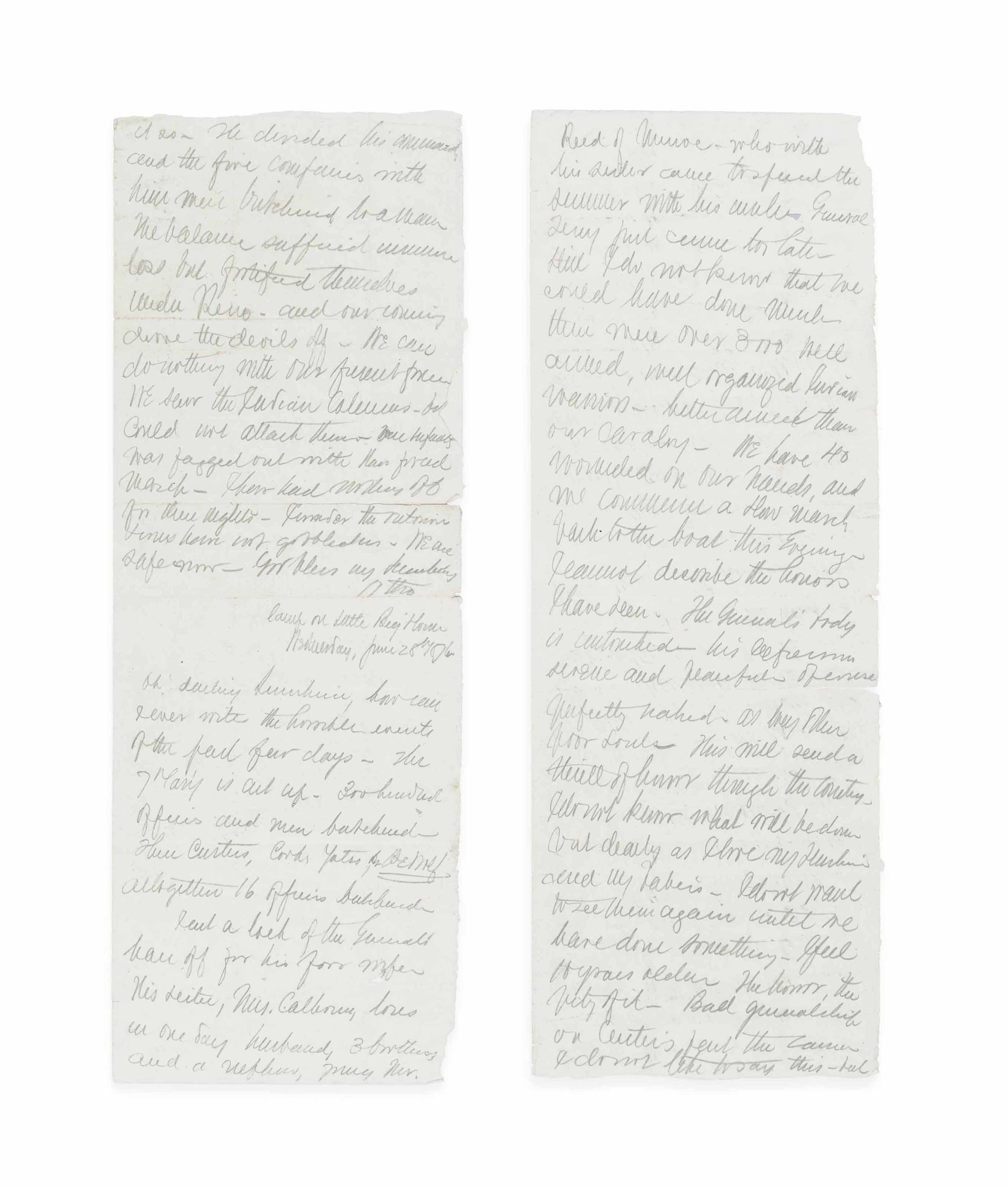