COSTUME]. HUTTON, Catherine (1756-1846). A remarkable collection of costume prints collected from 1795 to 1831, comprising over 1400 mounted engravings, woodcuts, and aquatints showing a wide variety of historic costume and early nineteenth-century f...

COSTUME]. HUTTON, Catherine (1756-1846). A remarkable collection of costume prints collected from 1795 to 1831, comprising over 1400 mounted engravings, woodcuts, and aquatints showing a wide variety of historic costume and early nineteenth-century fashion of the world. The collection was meticulously maintained over thirty-five years by Hutton, who carefully cut images from Old Master and contemporary prints of her day and mounted them into bound folio volumes. Many of the prints are hand-colored, possibly by Hutton. The artists represented are frequently identified by her and include: Dürer, Bonnart, Scotin, De Bruyn, Van Sichem and numerous others. Each engraving is numbered and captioned by Hutton, and included in her often lengthy handwritten descriptive index in each volume. Together 8 volumes, 2 o (Vols. I-III [first series]: 385 x 240 mm, Vols. IV-V [first series]: 425 x 275 mm; Vols. I-III [second series]: 425 x 275 mm). Early nineteenth-century diced russia gilt (spines rebacked preserving original backstrips, some other repairs). Contents: Vol. I: "Turkish Greek Persian and Other Eastern Dresses Collected by Catharine Hutton 1795" [manuscript title within mounted engraved border]. 17 pp. manuscript index, 166 prints. Vol. II: "French Dresses Collected by Catharine Hutton 1796." Title, 24 pp. index, 183 prints. Vol. III: "German and Italian Dresses. Collected by Catharine Hutton 1797." Title, 22 pp. index, 190 prints. Vol. IV: "Northern Indian and Chinese Dresses. Collected by Catharine Hutton 1799." Includes native American inhabitants. Title, 21 pp. index, 180 plates. Vol. V: "Turkish, Spanish, Dutch, Flemish and French Dresses; Collected by Catherine Hutton." [Final plate captioned 1831]. Title, 17 pp. index, 147 plates. Second Series Vol. I: "English Dresses Collected by Catherine Hutton 1805." Title, 2 pp. preface, plate descriptions on versos facing each mounted plate, 210 plates. Vol. II: "English Dresses. Collected by Catherine Hutton, 1807." Title, plate descriptions on versos facing each mounted plate, 227 plates. Vol. III: "English Dresses. Collected by Catherine Hutton." [Captions dated 1807-1827]. Title, plate descriptions facing each mounted plate, 153 plates. Born on 11 February 1756, Catherine Hutton was the only daughter of the poet and seventeenth century topographer of Birmingham, William Hutton (1723-1815). Catherine was a writer of novels and had numerous literary connections, and collected autograph letters of many famous people of her day. In her manuscript Preface to the first volume of English Dresses (1805), she writes of her passion for collecting costume prints: "At eleven years old I began my Collection by saving the figures of the Ladies Pocket book; and at twenty two, when I was first in London, I went to the Publisher and bought all the prints prior to my own; though, as some were taken off on purpose for me from the old plates, they were shocking impressions." "I went on, increasing my Collection by every means in my power, till January 1790, when I extended my plan to every inhabitant of the Globe. From that time to May 1791 my brother ransacked London once, and myself three times, and we bought all that we could find. But a circumstance happened wholly unforeseen. The champions of Church and King, bludgeon in hand, attacked my poor little men and women, and spared neither sex or age. My foreigners perished entirely. Such of my English as were scattered shared the same fate; but, luckily, the greater number of them were bound together by paste and pasteboard, and were rescued by some friend from the general slaughter. I rose, undismayed by the storm, and set about collecting again. Many curious prints I could never replace; but, on the whole, I believe that my second Collection, though not so large, is better than the first." (8)

A SILVER AND GLASS MEDALLION OF CATHERIN

A Jimmy Stewart clown costume from The G 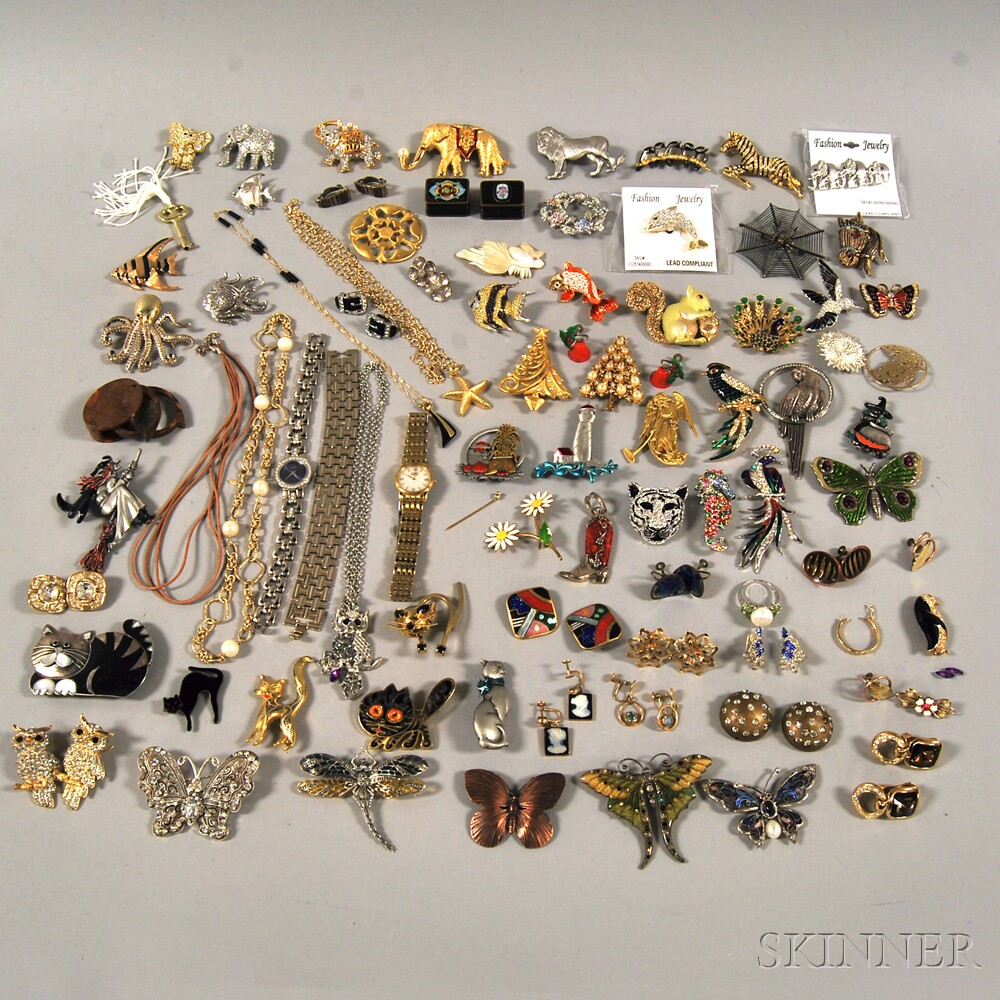 Large Lot of Vintage Costume and Later B