CONCHOLOGY . A collection of 3 sale catalogues and one article, all extracted from an early nineteenth-century conchological sammelband , comprising

CONCHOLOGY . A collection of 3 sale catalogues and one article, all extracted from an early nineteenth-century conchological sammelband , comprising: [George Humphrey (compiler).] Museum calonnianum. Specification of the Various Articles which Compose the Magnificent Museum of Natural History Collected by M. de Calonne in France . London: [n.p.], 1797. Part I (all published). Interleaved. (Some spotting and marginal damp-marking, title laid down.) Provenance : occasional pencilled annotations. FIRST EDITION. 'ONE OF THE LARGEST SHELL COLLECTIONS FORMED IN FRANCE PRIOR TO THE REVOLUTION' (Dance, p.91). Charles Alexandre, Duc de Calonne, Contrôleur général des Finances (1734-1802), emigrated to England before the Revolution, following his disgrace as minister of finance. The sale of his collection (which comprised 1439 lots) included 'a beautiful example of Conus gloriamaris [...], one of the three specimens of Carinaria cristata L. known at the time and the then unique specimen of Aulica aulica Sowerby [...], bought at the sale of the Portland museum [and subsequently sold in the Tankerville sale, illustrated above]' (Dance, p.92). BM(NH) I, p.300; Dance Shell Collecting 136. William SWAINSON (1789-1855). A Catalogue of the Rare and Valuable Shells, which formed the Celebrated Collection of the late Mrs Bligh. With an Appendix, Containing Scientific Descriptions of Many New Species ... London: by W. Smith, 'to be had at Dubois' Auction Rooms [...] and of Mr Wood', [1822]. Hand-coloured lithographic frontispiece and plate. (Some spotting). FIRST EDITION. The collection of Elizabeth Bligh contained 1024 lots (ending with 'An elegant cabinet [...] made of mahogany, and the interior lined with Botany Bay wood'), and 'was outstanding for its many beautiful and rare shells, most of them having been obtained from conchologically virgin territories in the South Seas by British voyagers and especially by her famous husband, William Bligh [...] of the Bounty ' (Dance, p.139). BM(NH) V, p.2054; Dance Shell Collecting 91. George Brettingham SOWERBY (1788-1854). A Catalogue of the Shells [...] in the Collection of the late Earl of Tankerville, Arranged According to the Lamarckian Conchological System; [...] with An Appendix, Containing Descriptions of Many New Species . London: E.J. Stirling for G.B. Sowerby, 1825. 4 hand-coloured lithographic plates by C. Scharf and J. Fahey, printed by C. Hullmandel and 5 hand-coloured engraved plates. (Scattered light spotting and marking.) Provenance : figure of Conus vespertinus circled and annotated 'sold to Melville Aug/17- , by H.C Fulton , (from MacAndrew coll)'. First edition. 'This issue [...] differs from the usual one on octavo paper [...] in having an additional coloured plate, while the plates as a whole are better impressions and more carefully coloured' (BM(NH)). The collection of Charles Bennet, fourth Earl of Tankerville (1743-1822) was sold as 2487 lots, 'which exceeded even the Bligh collection in choice and rare shells for it included some of the best specimens from the Portland museum and a large part of the Calonne shell collection' (Dance, p.142). BM(NH) VIII, p.1226; Dance Shell Collecting 269. Together with a short article by Swainson. 8° (210 x 134mm), the 4 works stitched, the first retaining the upper wrapper (shaken, some leaves loosened). wrapper (shaken, some leaves loosened). wrapper (shaken, some leaves loosened). (4)

CONCHOLOGY -- A collection of 22 fine or

Conchology - a collection of Indian Ocea 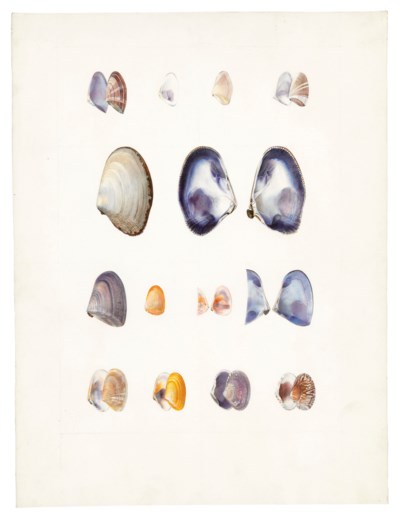 Sowerby (G.B.) - A Catalogue of the Shel