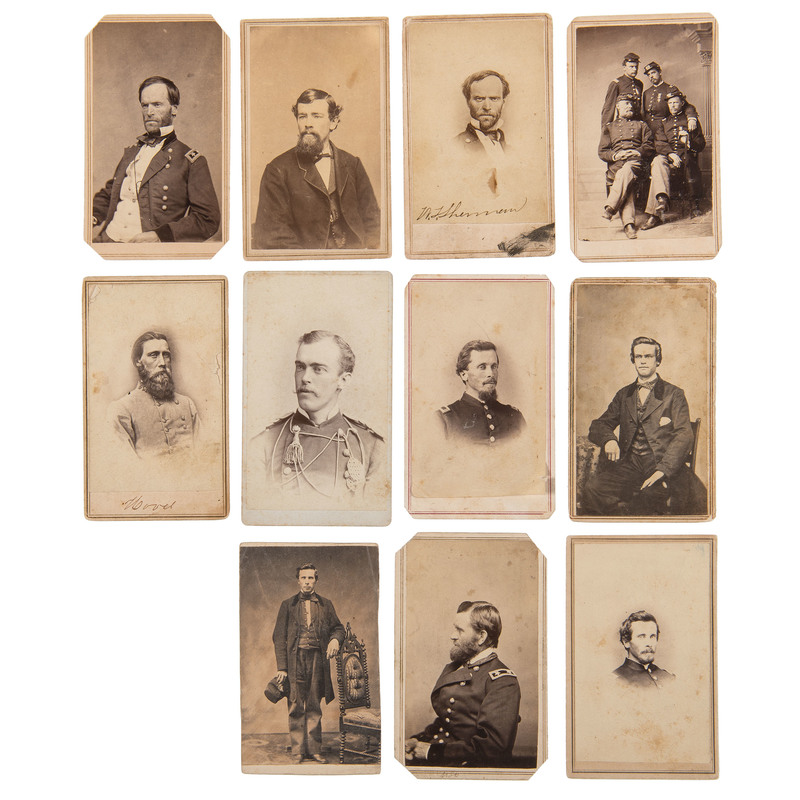 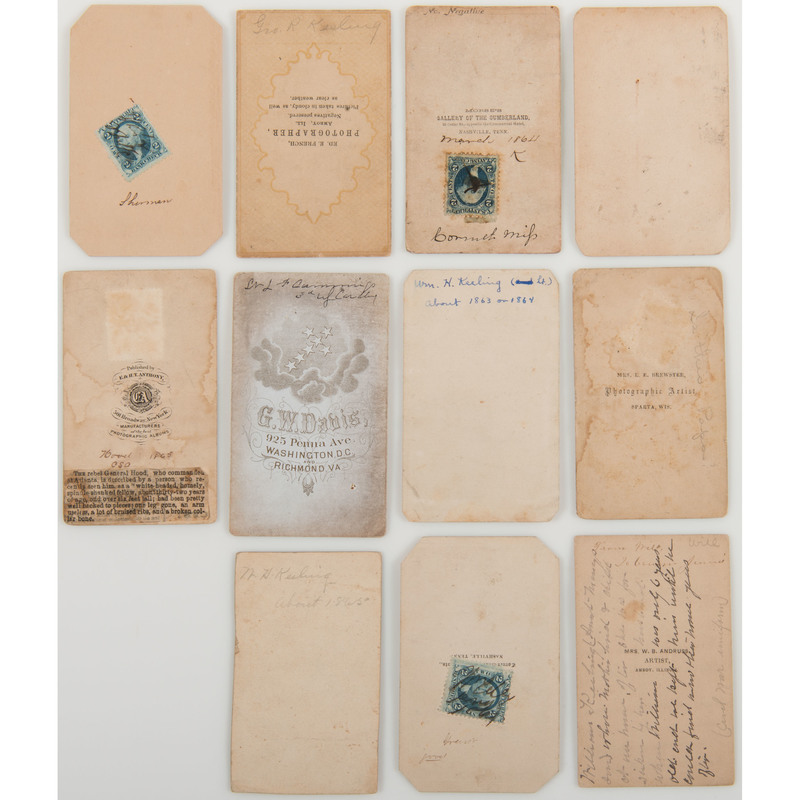 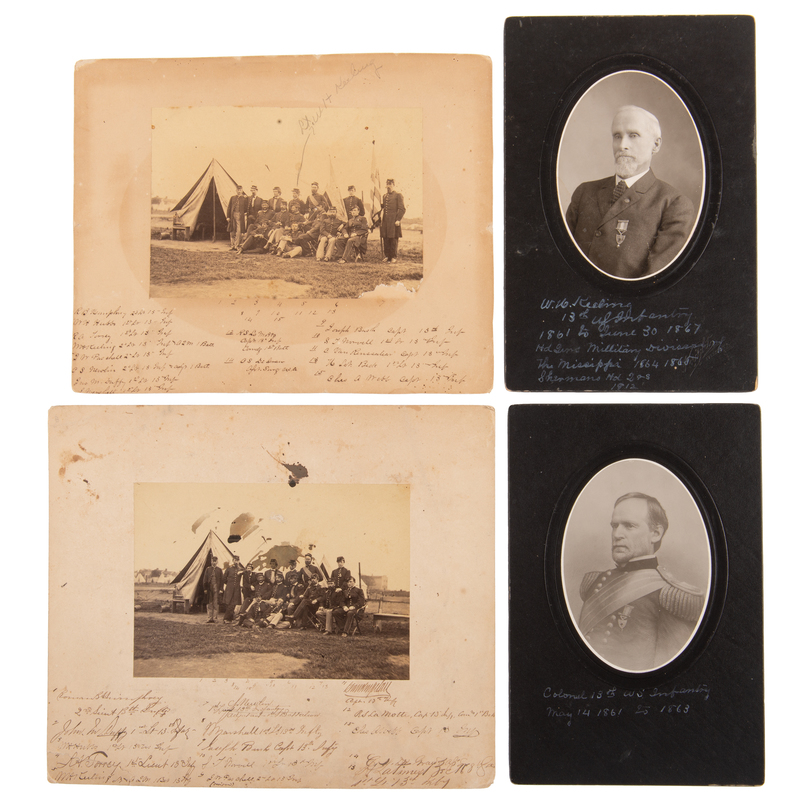 Lot of more than 30 items, including photographs, documents, field binoculars, hand sewn textiles, and more. William Henry Keeling (1835-1920), Civil War veteran and friend to Western Indian tribes, was born in 1835 to Henry Keeling and Nancy Hill Keeling. Keeling's father left the family while William was still a young child, but returned for him in 1854 and the pair removed to Illinois. In April 1855 Keeling entered the employ of the United States Government as a member of a surveying corps at Fort Leavenworth, Kansas. He went on to hold various jobs in the ensuing years in Iowa, Louisiana, and Texas. On September 16, 1861, Keeling enlisted as a private in the 13th US Infantry at Dubuque, Iowa, and was mustered into Co. H. He would remain with the 13th throughout the war, serving on General William Tecumseh Sherman's staff and earning a "First at Vicksburg" badge as one of the first few officers of Sherman's headquarters to cross the ramparts at the capture of that city. Sherman and Keeling would continue their friendship in the decades following the war. Following the Civil War Keeling remained in the army returning to Ft. Leavenworth. He then served as both quartermaster and commissary during the 1866 building of Camp Cooke, the first US Army outpost in Montana Territory. It was in Montana that, despite ongoing tensions in the area between settlers and American Indians, Keeling earned a reputation among the American Indians as a trustworthy and honorable man. The Piegan referred to him as "The man who shakes hands and gives us bread and meat." Keeling resigned from the army on June 30, 1867, having attained the rank of 1st lieutenant. He returned to civilian life where he continued his business pursuits in mercantile and merchandising endeavors. He was a well-respected member of the community and served three-times as mayor of Falls City, Nebraska. Keeling married three times, outliving his first two wives, and was survived by his third wife upon his death on March 6, 1920, in Falls City. The Keeling archive is highlighted by a wonderful assortment of photographs. William H. Keeling is represented in a striking sixth plate ruby ambrotype featuring a uniformed Keeling, as well as in two war-date CDVs and a post-war CDV identified on verso as "W H Keeling about 1865." A later, undated oval portrait of Keeling on black mount is accompanied by an oval portrait of engraving of Sherman on black mount. Nine additional CDVs feature Sherman, Grant, Hood, and several unidentified soldiers and civilians, one of whom is possibly a Keeling relative. There are four mounted albumen photographs including two images measuring approximately 9.5 x 7.25 in. both of which are inscribed at lower left on mount recto "Class in Infantry School at Ft. Leavenworth / Prior to 1886." The smaller albumen photographs measure approximately 6.5 x 4.5 in. and feature soldiers of the 13th Infantry including Keeling, with each individual in the photograph identified on bottom of mount recto. Rounding out the photography are ninth plate ambrotype and tintype portraits of an unidentified woman; a ninth plate tintype of an infant; a small, mounted silver gelatin photograph of two men identified on verso as Nell Hershey and Jim Pickett in camp 1898; and a snapshot of a dog inscribed "Jingo." Civil War-era field glasses/binoculars accompany the photographs. Manufactured ca 1860, marked along the eyepieces "Bardou & Son / Paris" and on the bridge "U S Army / Signal Glass," approx 55mm (2.5 in) lenses, 9 inches fully extended, main brass body covered in worn leather which on one side is manually attached with non-professional adhesive tape. One eyepiece has an indentation on brass surrounding lenses. Binoculars are housed n a hardshell leather case which is missing its strap, lid no longer affixed to case. Optics and rain/dust shields all in working order. A varied assortment of items spanning Keeling's career constitute the remainder of the collection. These inclu 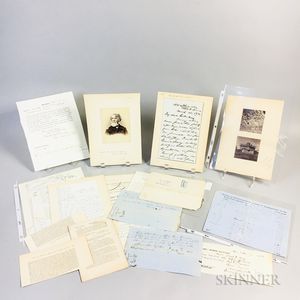 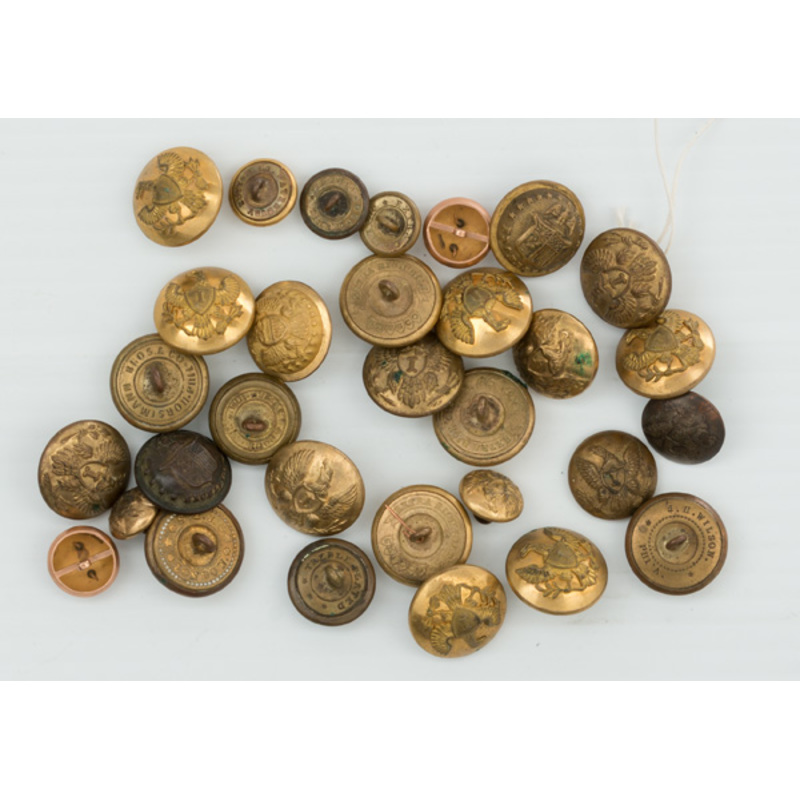 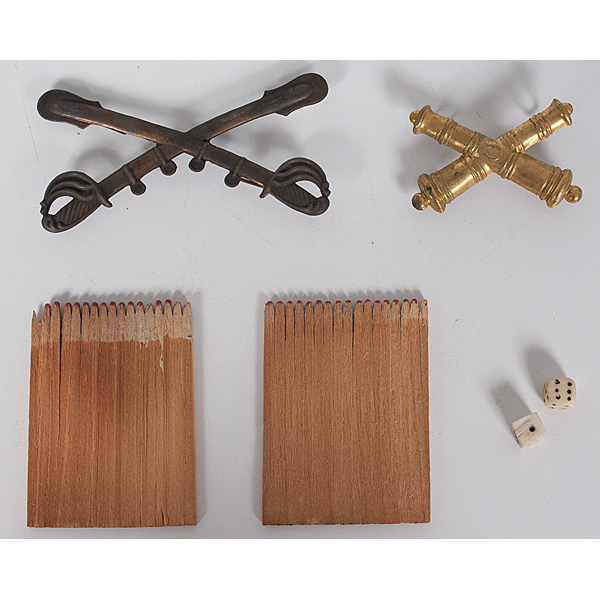 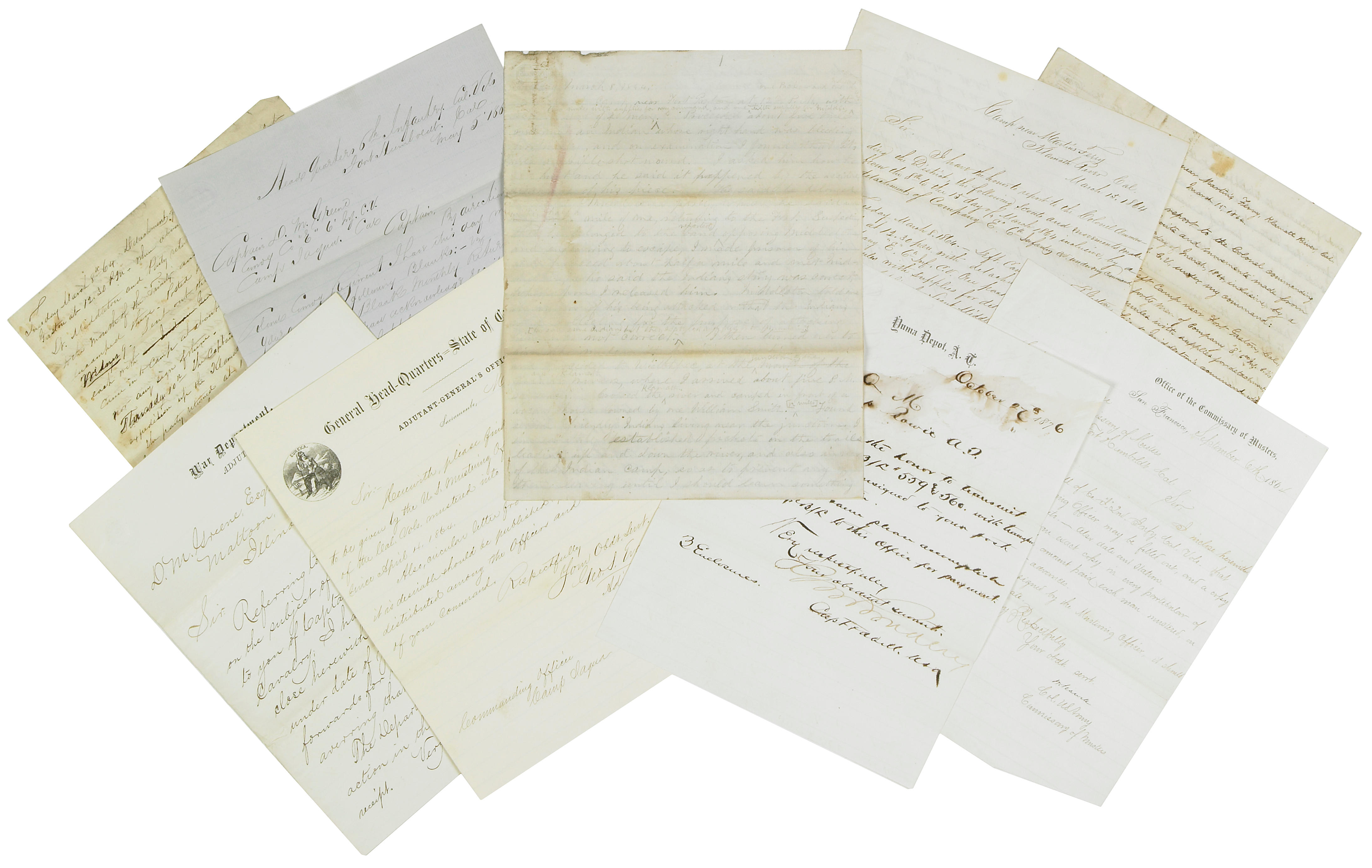 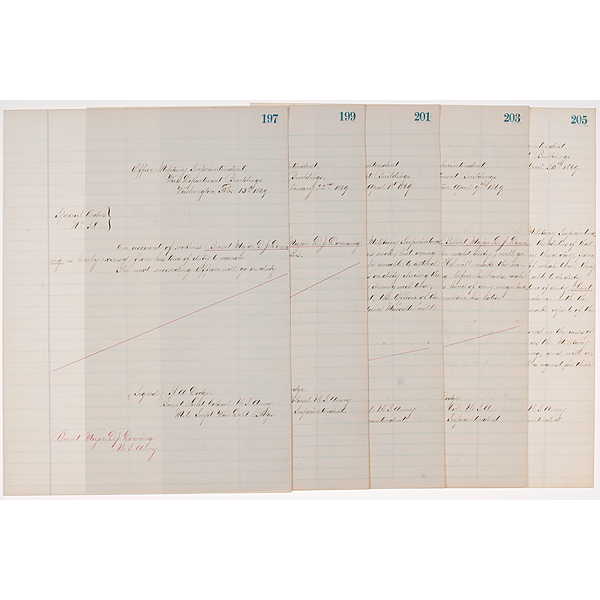 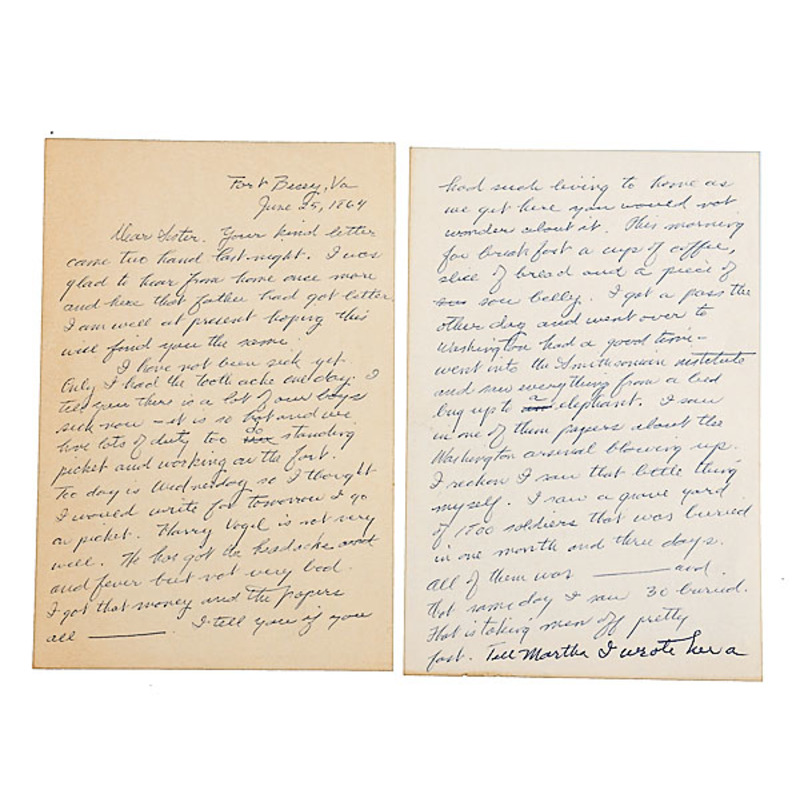 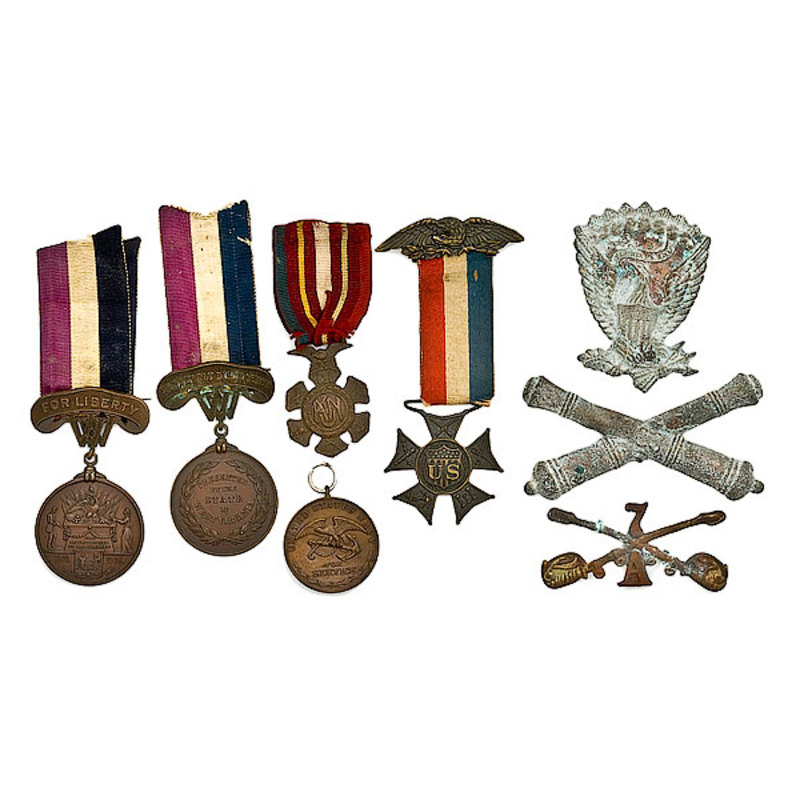 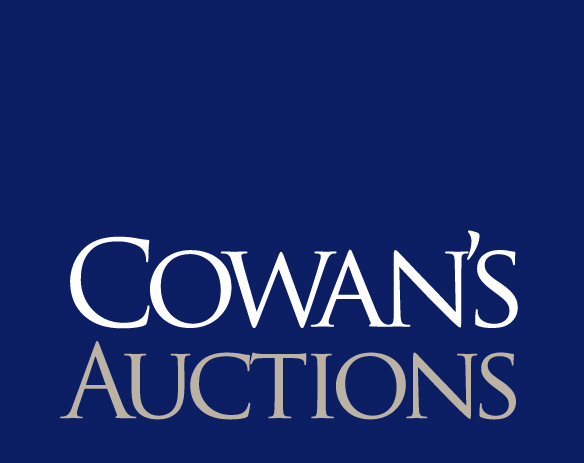 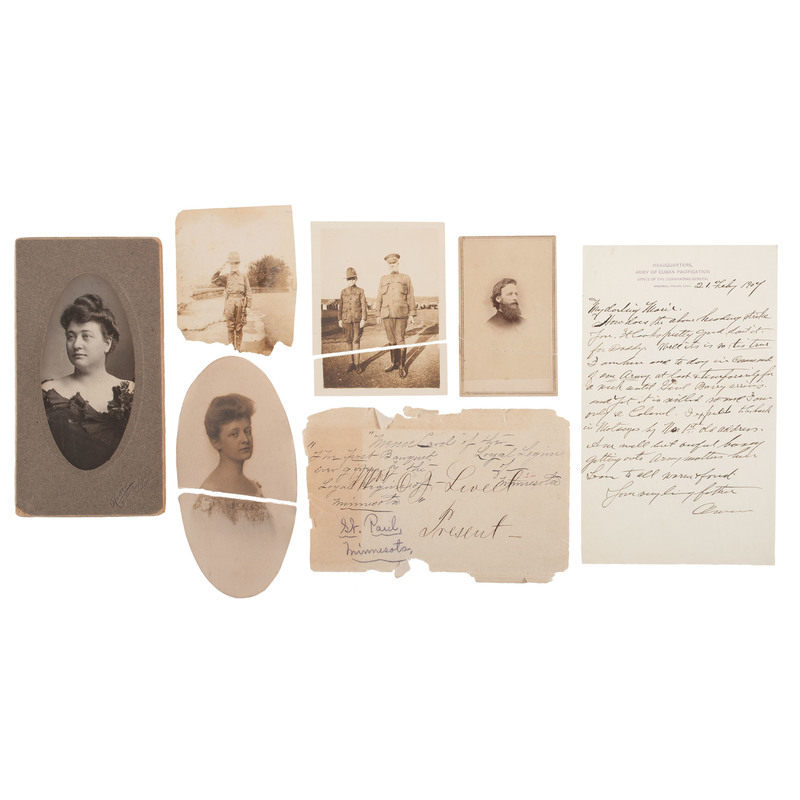