CIRCLE OF JACOB DE BACKER (flemish c.1540-before 1600) A TRIPTYCH CENTER: THE MADONNA AND CHILD ENTHRONED WITH SAINT CATHERINE, SAINT AGNES, SAINT CECILIA, MARY MAGDALENE AND ANGELS | THE LEFT WING: THE ADORATION OF THE SHEPHERDS | THE RIGHT WING: THE ASSUMPTION OF THE VIRGIN Oil on panel Central panel: 47 x 54 in. (119.4 x 137.2 cm) Wings (each): 47 x 21 1/2 in. (119.4 x 54.6 cm) provenance: Christies, South Kensington, sale of April 19, 2000, lot 1. Acquired directly from the above sale. Private Collection, Oregon. NOTE: Although little is known about his life, short-lived Jacob de Backer was one of the most prolific painters of the Antwerp School during the final decades of the sixteenth century. The son of a "very good painter", [Jacob was] "easily one of the best colorists that Antwerp has known: he had a fleshy manner of painting because he highlighted not just with white but with flesh color, so that he earned eternal fame among painters" (Karel van Mander, The Lives of the Illustrious Netherlandish and German Painters, 1994, vol. I, pp. 185-186). While his work is reminiscent of Tintoretto's (1519-1594) colorful scenes and generally shows a strong influence of Roman and Florentine Mannerism, there is no evidence that the artist ever made a single trip to Italy, contrary to many of his fellow contemporaries such as Peter Paul Rubens (1577-1640). The present work's imposing and complex multi-figured composition exemplifies de Backer's exceptionally high artistic standards. The triptych is made from three different panels, with the central image depicting an Enthroned Virgin Mary surrounded by many female saints. While the left wing shows us the Annunciation, the right wing represents the Assumption of the Virgin i.e. the moment where her body ascended to heaven at the end of her earthly life. Such subjects allowed for the depiction of large groups of figures and motivated de Backer to explore the many idealized shapes of the human body. Representations of the Madonna with female saints were popular in 15th and 16th century Antwerp. Here, Saints Catherine of Alexandria, Agnes of Roma and Mary of Magdala, all of whom lived in different places and at different times, join the Virgin Mary and Christ Child in a heavenly paradise populated by angels. This is the martyred saints' reward, meant to inspire similar Christian devotion in the viewer. An important symbol of Christian art, the triptych was a popular format for altar paintings in medieval churches. Simply-shaped and relatively small until the early fifteenth century, the altarpiece gradually took on considerable dimensions, becoming an important fixture within the church at the age of the Counter-Reformation. While the exterior wings are typically treated en grisaille and shut for the majority of the year, the interior panels are treated with extreme care and display an impressive range of colors, including gold, the idea being to reveal the scenes to the viewer in all their splendor. The use of grisaille dates back to 1450s. Their rendering, however, has evolved from simple trompe-l'oeil to more pictorial qualities, as shown here. While earlier artists such as Robert Campin (1375-1444) used grisaille to imitate sculpture, hence underlying the difference between the outside of the triptych (all things earthly) and the inside of it (all things heavenly), the present work implements a softer and more delicate touch. As a result, the relationship between the inside and the outside of the triptych becomes stylistically similar, creating a certain harmony. 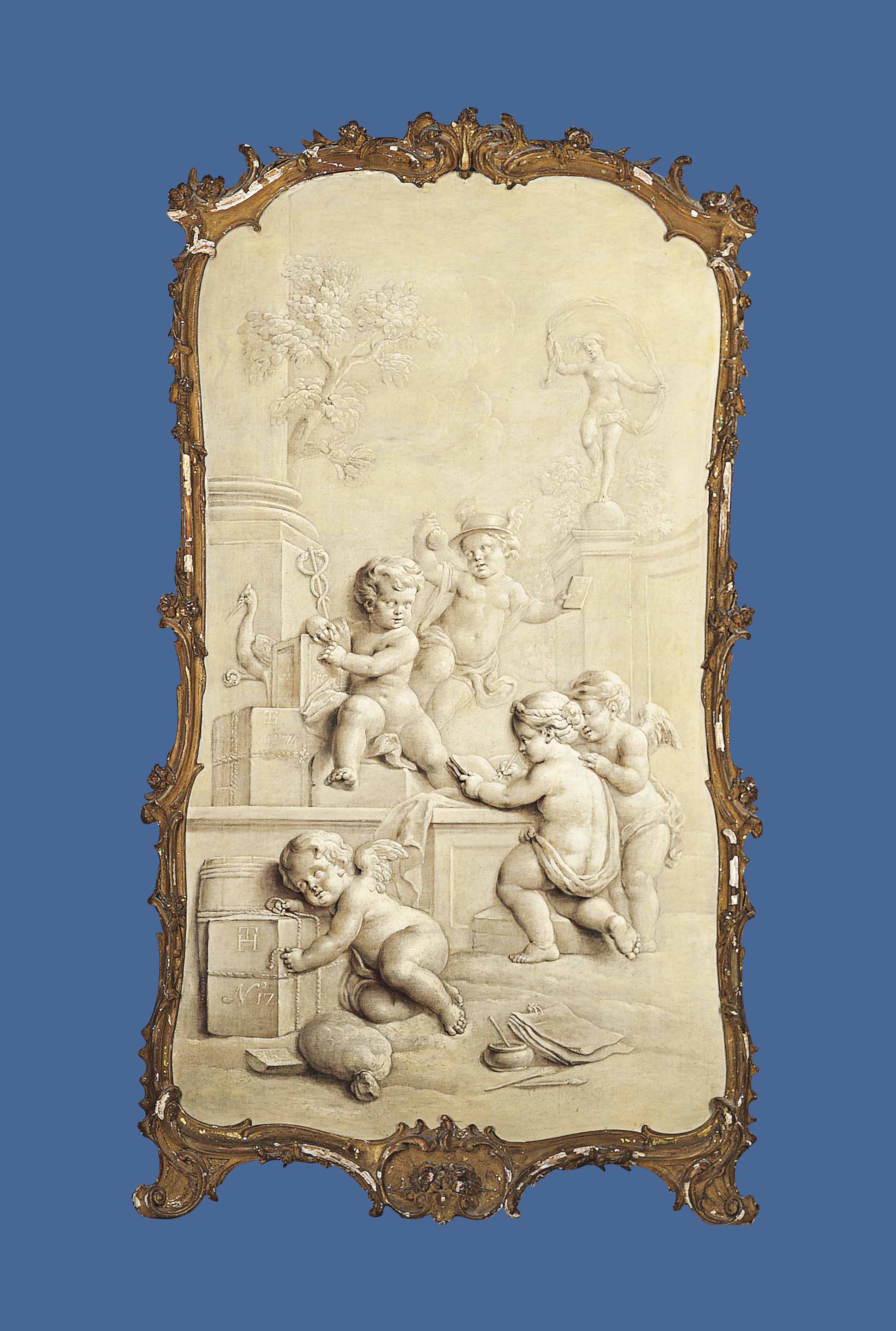