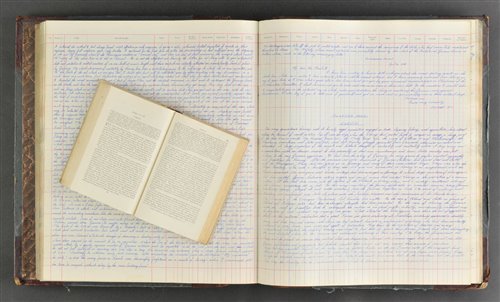 The Second World War, 6 volumes written out in manuscript longhand into 2 large day books and a ledger, by an unidentified hand, circa 1950s, a right-sloping neat hand in mostly blue or black fountain pen inks with occasional red highlights, etc., seemingly an unabridged and full transcription (except some quoted sources typed up on separate loose sheets in a folder), written on both sides of approximately 800 leaves of 3 ledgers/day books, volumes 1 and 2 of the magnum opus written into one day book, volume 3 into a ledger (damp-frayed at lower margins), volumes 4-6 written into a second day book matching the first (with printed columns for rooms, wines, accounts, etc.), this final volume following straight on with full-length transcriptions of 4 other of Churchill's works in the same hand, 'My Early Life', 'Thoughts and Adventures', 'Great Contemporaries' and 'Step by Step', approximately 150 blank leaves at rear of volume 3, contemporary quarter leather, some soiling and wear, volumes 1 & 3 with printed stationer's labels of Arthur Wrigley, Leeds, at front, large 4to (49 x 41 cm), volume 2 folio (47 x 30 cm), together with a folder of related typed leaves supplying many of the quoted sources for which coded references are left in the manuscript A truly bizarre Churchill archive, this three-volume manuscript raises unanswerable questions of authorship and appropriation. The Second World War alone totals over 1.5 million words and what person would voluntarily, (or otherwise), attempt to rewrite all this verbatim in longhand defies all logic and explanation. The handwriting is not Churchill's, nor any of his known secretaries, according to the Churchill Archives, Cambridge. Besides which Churchill's modus operandi for writing was dictation to typists in the first instance, which was then hand corrected by Churchill, retyped and corrected once more. Even with the large team of researchers involved in the preparation of The Second World War there would have been no call for such a manuscript. The inclusion of full transcriptions of four further and earlier works by Churchill adds to the bafflement. The ledgers were acquired around 20 years ago from a large house clearance near York. There are two clues as to who the author may be, both possibly in the same hand as the manuscript itself: The name 'Philip H. [?]Richings' appears on the front free endpaper of the second day book, and a three-page manuscript poem ('An Ode to Sir Barnes [Wallis]'), included with the folder of typed quoted sources, is initialled 'P.H.R.' at the end. (3 ledgers & a folder)