Chinese School, 18th century An album of botanical watercolours of fruit, flowering shrubs, trees and plants. [?Canton: circa 1780-1800]. 2° (370 x 280mm). 100 fine watercolour and bodycolour drawings, each numbered in brown/black ink by a single western hand, the majority of the plants identified or partially identified in Latin or German, in pencil by two early hands, interleaved with thin laid paper. Contemporary German mottled calf gilt, covers with decorative border of fillets and roll tools, the upper cover with centrally-placed coroneted monogram 'GA', spine in eight compartments with raised bands, repeat gilt decoration of a flower-spray with flower and foliage cornerpieces in each of the compartments, marbled endpapers (some generally light scuffing to extremities. Provenance : early unidentified shelf marks in black/brown and red ink ('4068 55'); early pencilled manuscript notes in two hands. A VERY FINE COLLECTION OF CHINESE BOTANICAL STUDIES OF FLOWERING PLANTS AND FRUIT, BOTH NATIVE AND 'FOREIGN': AN EARLY EXAMPLE OF WORK ESPECIALLY COMMISSIONED FOR THE EUROPEAN MARKET. The binding of the album is not distinctive enough to identify a particular binder, but, on styllistic grounds it is almost certainly German, and appears to date from about 1780-1800. The papers used in the binding (the endpapers and the interleaves) are all Dutch: the interleaves all bear the watermark of Adriaan Rogge, or Jan Kool, the endpapers are from C. & I. Honig. The drawings themselves are all on English laid paper, watermarked either 'J Whatman' or with Whatman's counter-mark of a 'bend on shield' surmounted by a fleur-de-lys. The drawings, although botanically correct in most cases, do not include the details of flower and fruit structure that are found in some of the later work produced under the supervison of western botanists such as William Kerr or the naturalist James Reeves. The drawings in the present album are pure plant portraits, capturing a moment rather than offering a view of a plant at various stages during the year. The selection is unusual in the number of species shown that are not of Chinese origin: maize, sunflower, grape, carnation, etc. This may just be a reflection of what species were available to the artist, but could be an indication of a request for images of specific species, possibly by the the original owner of the album. The image of the carnation ( Dianthus caryophyllus , number 48), for instance, appears to have been assembled by the artist using the flowers of D. caryophyllus placed on the foliage of D. chinensis which suggests that artist had received a request for an image of this species but, being unable to find an example of the complete plant, was forced to guess at the structure of the leaves and stems. The album is somewhat unusual in that there are no indications of the local names of the plants: and the only contemporary inscriptions are the western numbering of the drawings. These appear to have been added before the plates were bound. Two slightly later western hands are evident in the discreet pencilled identifications, in Latin or German, to the majority of drawings: on the whole these are accurate and indicate a good working knowledge of botany. The subjects of the drawings include 69 of plants in bloom (e.g. 2 roses, 2 camellias, 5 hibiscus, 6 prunus) and 31 of fruit (maize, banana, peach, persimmon, lychee, mango, pineapple, grape, star-fruit, pomegranate, etc.). A full listing of the subjects of the drawings is available on request. We would like to thank Jennifer Vine for her help in cataloguing this lot. 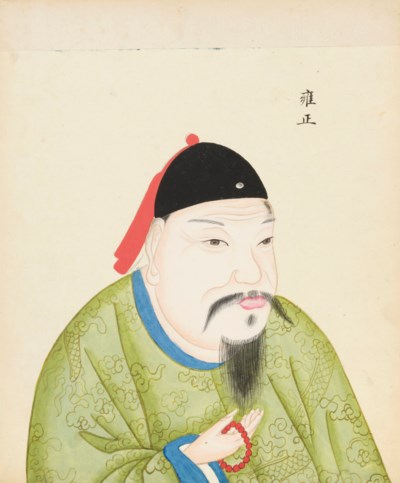