BYRON, GEORGE GORDON NOEL BYRON, 6th Lord. ] POPE, ALEXANDER. The Works of Alexander Pope Esq....With Notes and Illustrations by Joseph Warton, D.D., and Others. Volume the First [of 9], Basel: J.J. Tourneisen 1803. 8vo, vol.1 only (of 9), 395 pp., later quarter calf and marbled boards, worn, upper joint cracked and crudely taped, text with light but general foxing, title-page soiled. LORD BYRON'S COPY, with early ink inscriptions on title: "This volume belongs to Lord Byron," and "Belonged to Lord Byron at Genoa, J.C. Hobhouse 1827" (the latter inscription cropped by binder), and later inscription on facing binder's blank: "I bought this set at Evan's when part of Ld. Byron's books were sold by auction...J.H." Armorial bookplate of "Rt. Honble. Sir John Cam Hobhouse Bt." Byron's nine-volume set of Pope, probably purchased on the Continent, remained, according to Hobhouse's note, with the poet during his Genoa residence. Byron seems to have experienced a late resurgence of interest in Pope. To Thomas Moore he wrote, on 3 May 1821: "As to Pope, I have always regarded him as the greatest name in our poetry. Depend upon it, the rest are barbarous..." ( Letters , ed. Marchand, vol. 8, p. 109. In Evans's posthumous auction of the remnants of Byron's library in 1827, his set of Pope, lot 153, was one of a number of lots purchased by Byron's close friend and literary executor, John Cam Hobhouse. (See the facsimile of the catalogue in Sale Catalogues of Libraries of Eminent Persons, ed. A.N.L. Munby, vol.1, pp.233-249. 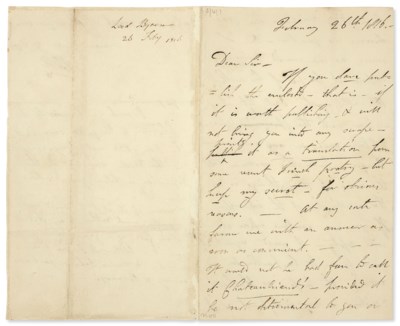