BROADSIDES -- A collection of 274 broadsides reporting trials, murders, resurrections, natural disasters, riots and destitution. Mainly Nottingham: Charles S. Ordoyno, circa 1808-1823. Half-sheet and quarter-sheet broadsides (234 x 170mm). Many of the broadsides illustrated with woodcuts showing murders, hangings, coffins, courting scenes and religious images, and with engraved or woodcut borders, each with a stamped numeral in the upper right-hand corner, numbered from 1-282, several with manuscript annotations, 3 pages of letterpress index bound at back. (Lacking 8 broadsides, no. 1 bound between 265 and 266, nos. 243 and 251 with illustration excised, 123 torn at inner margin, several leaves shaved affecting text or illustration.) Near-contemporary half sheep over marbled boards (rebacked). AN IMPORTANT COLLECTION OF EPHEMERAL PROVINCIAL PRINTING. Most of the broadsides were printed or reprinted by Charles Ordoyno of Nottingham, but the collection also includes examples of printing from Leicester, Manchester, Sheffield, Birmingham, York and Northampton, as well as smaller towns such as Grantham, Belper, Chesterfield, Bilston and St. Albans. Our researches have been unable to discover much other printing by Ordoyno, but the Nottinghamshire Local Studies Library have kindly informed us that he is listed as a printer in Pannier Close, Nottingham in 1814, moving to Cross Street in 1815, where he remained until at least 1825, and probably until his death in 1826. He also printed and published the Derby Herald . The Ordoyno family was firmly based in the Midlands: a William Ordoyno, perhaps Charles's son, is recorded as a printer at Cross Street in 1832, and a Thomas Ordoyno was a prominent nurseryman at Newark-on-Trent at the beginning of the 19th century, and author of Flora Nottinghamiensis , published at Newark in 1807. (This work was wrongly ascribed to C.S. Ordoyno in C. Gerring's Notes on Printers and Booksellers , 1900.) The letterpress index seems to indicate that Ordoyno issued the present collection of broadsides as a group, despite the fact that a few are repeated. In one case, (nos. 204 and 205) Ordoyno's illustrated reprint of a Sheffield(?) broadside is bound facing the original. Most of the broadsides are printed on one side only, and in some cases the blank versos have been used for memoranda or advertisements (in manuscript), presumably before the sheets were bound in their present form. On sheet 223, William Henis, a chimmney sweep and "Fire Extinguisher", takes advantage of a broadside reporting a fire near Huddersfield in which 17 children died, to advertise his services, assuring potential clients that he "keeps clean cloaths for Parlors and uper Rooms . . . and attends his boys himself". An unusually large number of the broadsides in this volume relate to the social conditions of the day, including a large number detailing industrial accidents, for example the aforementioned fire, which took place in a cotton factory, an explosion in a Sheffield colliery (no. 51), and a fire in a pit at Bilston which killed 14 colliers (no. 89). Broadsides concerning riots provoked by the Reform Act and petitions against the Corn Laws are also included, as well as news from further afield: hurricanes in the West Indies, yellow fever in Spain and volcanic eruptions in the Phillipines. The wide geographical scope of the broadsides' subject matter contrasts with the relatively small area from which they originate, and is a testimony to the vigour of the Midlands provincial press. Many of the sheets are today no doubt unique. The lot is sold, as a collection of ephemera, not subject to return.

Broadsides. A collection of broadsides r

BROADSIDES. A collection of five 17th-ce

BROADSIDES. A collection of 27 broadside 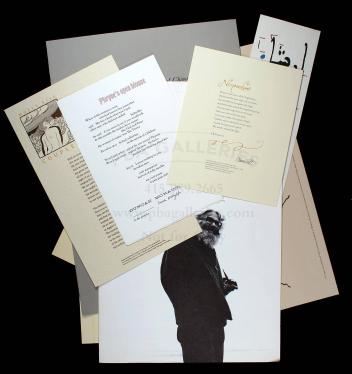 BROADSIDES -- A collection of c.58 broad

Broadsides. A collection of thirteen bro

BROADSIDES. A collection of 65 ballads, 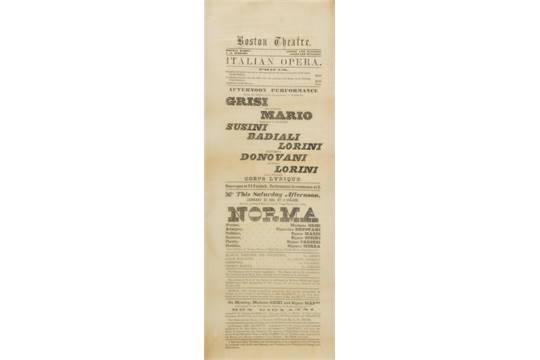 Broadsides. A collection of twenty

BROADSIDES. A collection of 26 ballads a

BROADSIDES. A COLLECTION OF NEW IRISH AN 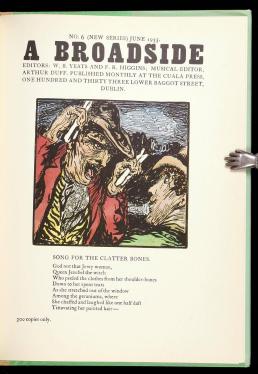 Broadsides. A Collection of Old and New 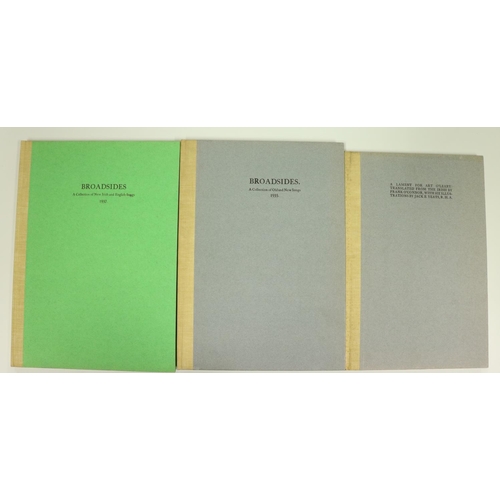