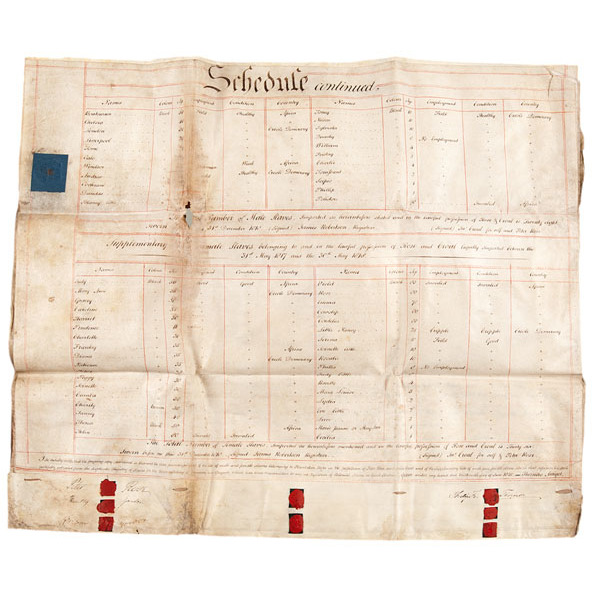 8pp, vellum, approx. 22.5 x 27.25 in. Place not stated, presume London; 15 June 1820. Indenture between Peter Rose and William Gordon the elder, William Gordon the younger, Alexander Crombie Philip Frederick Tinne Patrick Rose and Andrew Rose. The indenture enumerates slaves held at Hope Plantation in Essequibo (British Guiana) in 1817 and 1818. The male slaves enumerated as of 1 July 1817 number 162; the females held as of that date, 93. Imported between 31 May 1817 and 30 May 1818: males, 28; females 36. (190 and 129 total) The name, color, age, occupation, condition (healthy, weak, invalid, cripple, good, sickly, superanuated [sic], sores, able, old, swelled legs, etc.) and country of origin is listed for each (many just list "Africa" as country of origin). Ribbon connection, 8 wax seals and 9 paper seals intact. Although the British outlawed the slave trade in 1807, slavery continued. In 1823 the Demerara Rebellion erupted in Demerara-Essequibo, in which slaves rose up against the planter/slave holders. It was quickly put down, but the desire for abolition continued to grow. Slaves finally won total emancipation in 1838. Many fled plantations, others combined their resources and bought them. One of the first groups, 83 Africans from Plantations Douchfour, Ann's Grove, Paradise, Hope and Enmore pooled their resources and purchased Plantation Northbrook for about $10,000, which they then divided into plots for each, and likely included some individuals enumerated in this indenture. They renamed the plantation Victoria - either for the queen or because of their victorious emancipation - the stories differ (although it is possible that both came into play). The town is credited with establishing one of the first local governments in Guyana. Many more groups of freed slaves purchased plantations, but once the planters realized there was money in the hands of slaves (they had been permitted to sell surpluses that they produced), the asking prices for the land increased. By 1841, Plantation Friendship cost $80,000. Emancipation also produced a labor shortage. The plantation owners reduced the wages for laborers, claiming that the United States was undercutting them since slavery was still operating here, and sugar and cotton were cheaper. If the former slaves went on strike, their fields were destroyed, their fruit trees cut down, their pigs were killed, they were prevented from fishing in the streams, and whatever else the plantation owners could come up with (they released water from canals to flood the Africans' fields in a few cases), in an attempt to force them to work for whatever the owners were willing to pay (usually, very little). Eventually attempts were made to attract outside workers, initially the Portuguese, then the Chinese. Later still labor was imported from India. This resulted in a diverse ethnic mix within the territory. Today, just under a third of the population is of African descent, and over 40% of East Asian descent. Another significant group is of mixed heritage (not surprisingly). Aboriginal peoples number over 9%, and one-half of one percent is accounted for by all others - including northern Europeans - the minority now as then. Emancipation profoundly changed the character of the population. Condition: Folds, as vellum often has. Damage along one fold making text unreadable through all sheets along the fold (approx. 1 - 2 in. width). Does not impact slave names, but occasionally occupation is hard to read.