BIBLE, in Latin. Edited by Gobelin Speck (1476-1556). Cologne: Eucharius Cervicornus for Gottfried Hittorp [?under the aegis of] Adolphus Rinchus and Arnoldus Segenius, 1530. 2 (309 x 197mm). Collation: A-B 6 C 4 a-z aa-ff 6 ee-ll 4 mm-zz 6 aaa-sss 6 ttt 8 uuu-xxx 6. 415 leaves (of 418, lacking A1 title and xxx1,2 from the glossary of Hebrew and Greek terms). Gothic, roman, italic and occasional Greek type. Address to the reader within four-part woodcut border incorporating printer's mark, the Chronographia with same border and woodcut of St. Jerome in his study, ornamental woodcut initials from several sets. (Lightly browned, light dampstain at lower margin heavier in first and final leaves, final quire rehinged, a few small marginal wormholes.) Contemporary German panelled calf over wooden boards tooled in blind with a feathery roll, remains of two fore-edge clasps with catches on lower board, later speckled edges (rebacked). Provenance : contemporary annotations (trimmed) in English and Latin in four hands, at least one of which was an English reformer in exile involved in preparing the 1560 Geneva Bible; Mrs. Peeters (later 16th-century name written upside-down on A2). A COPY OF THE EXTREMELY RARE EDITION OF THE LATIN VULGATE EDITED BY GOBELIN SPECK, WITH MANUSCRIPT ANNOTATIONS BY A TRANSLATOR/EDITOR WORKING IN EXILE ON THE CONTINENT TOWARDS THE ENGLISH TRANSLATION OF THE GENEVA BIBLE. IT IS THE ONLY SURVIVING MANUSCRIPT WITNESS TO ENGLISH BIBLICAL TRANSLATION BEFORE THE 17TH CENTURY AND IT IS A MAJOR DOCUMENT OF THE SCHOLARLY ACTIVITY OF THE ENGLISH REFORMATION IN EXILE. The Geneva Bible, first published in 1560, is acknowledged to be second only to the Authorized (King James version as a complete English scriptural text. It was prepared by a group of English reformers forced to flee to the continent at the accession of Queen Mary in 1553. Settling first at Frankfurt, in 1554 they moved to Geneva, a centre of Protestantism and of scholarly Biblical translation, and established an English church under the ministry of John Knox Although the team of editors and translators involved in the Geneva Bible is nowhere named, it comprised members of the congregation of Marian exiles, with William Whittingham as general editor. Other contributors may have been Miles Coverdale, Anthony Gilby, Christopher Goodman, Thomas Cole William Kethe, Thomas Sampson Rowland Hall, John Pullain, John Bodley, John Baron, and William Williams The present volume maintains their anonymity, as it is not signed and the hand of the annotations has not yet been identified, owing in large part to the lack of handwriting samples of many of the reformers. There can be no doubt that the annotations in this copy were made by one of the team of reformers at work on the Geneva Bible. Of the more than 580 translated phrases into English written by the principal annotator, all but a handful correspond closely to readings in the Geneva version. More significantly, about half of these appear in the Geneva version for the first time. For example, where previous English Bibles had the baby Moses found 'in the flags' or 'among the reeds' (Genesis 2:3), the annotator of the present Bible had him found 'amongst the bulrushes'. This is the wording adopted by the Geneva Bible. There are another approximately 250 similar examples, where the translations written here are incorporated into the Geneva Bible in preference to earlier English phrasing. Just as significant as the annotations which were incorporated into the Geneva Bible are those which were incorporated into neither the Geneva version nor any other version. Their omission shows that the annotator was not simply copying from an English Bible (perhaps as a crib) in annotating his Latin Vulgate, but that he was actively and independently working on the Geneva version, whose final editors chose among his translations, rejecting over twenty of them. From its first publication in 1560 the Geneva Bible was hug

BINDINGS]. -- BIBLE in Latin. Edited by 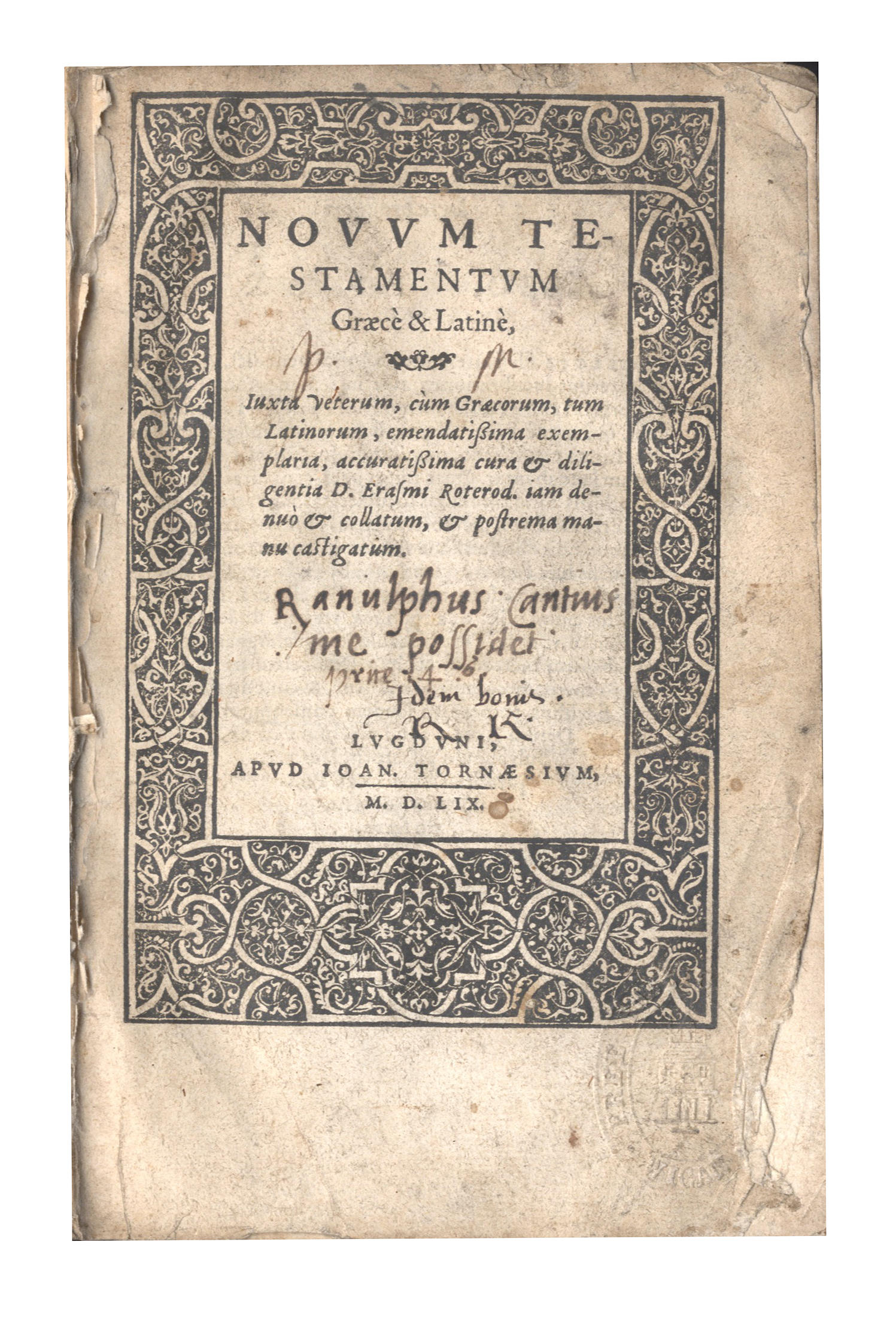 BIBLE, in Latin and Greek

BIBLE, in Hebrew. Pentateuch and Former